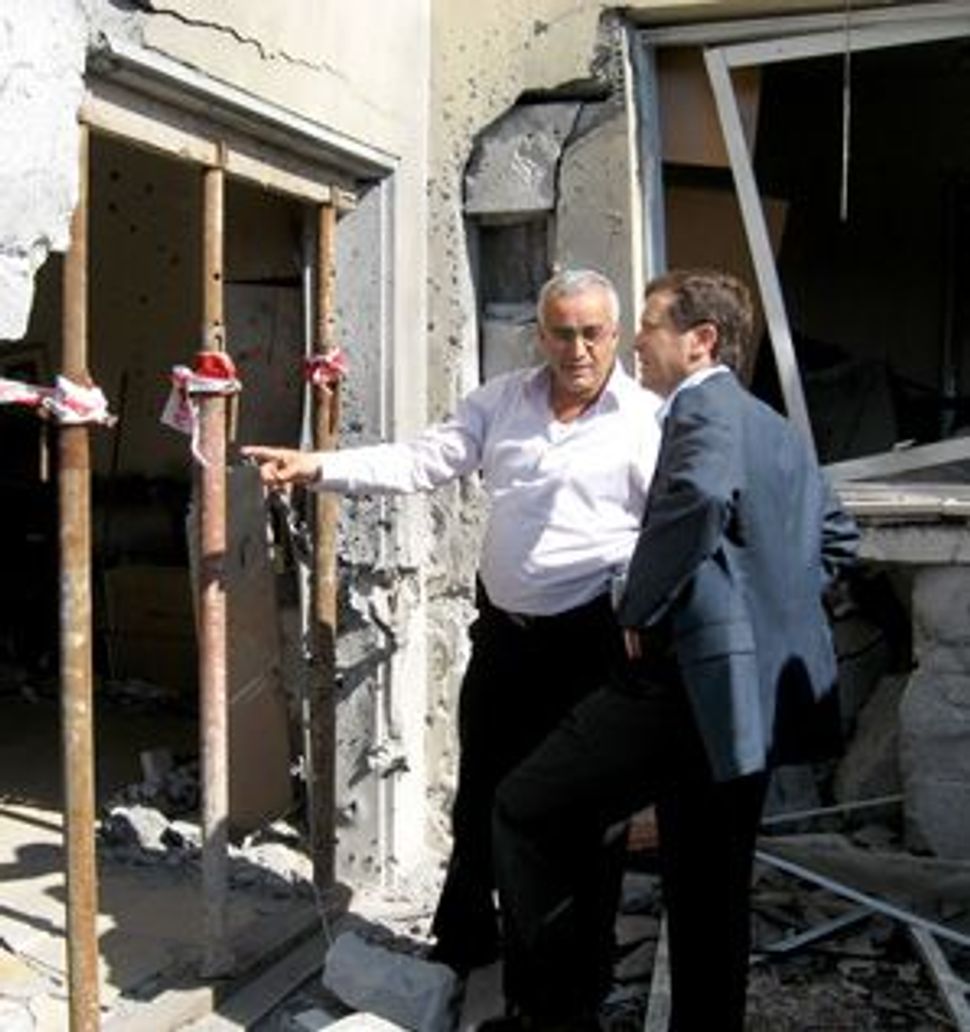 The Circle Widens: The mayor of Ashkelon, Roni Mahatzri, shows a member of Knesset one of the many scenes of destruction in his city after Hamas extended the range of rockets being launched from Gaza.

Beersheba, Israel – Atypically for Israel, Anat Weinstein-Berkowitz is dressed so smartly that she would fit in comfortably at any Wall Street law firm. Except for her sneakers. 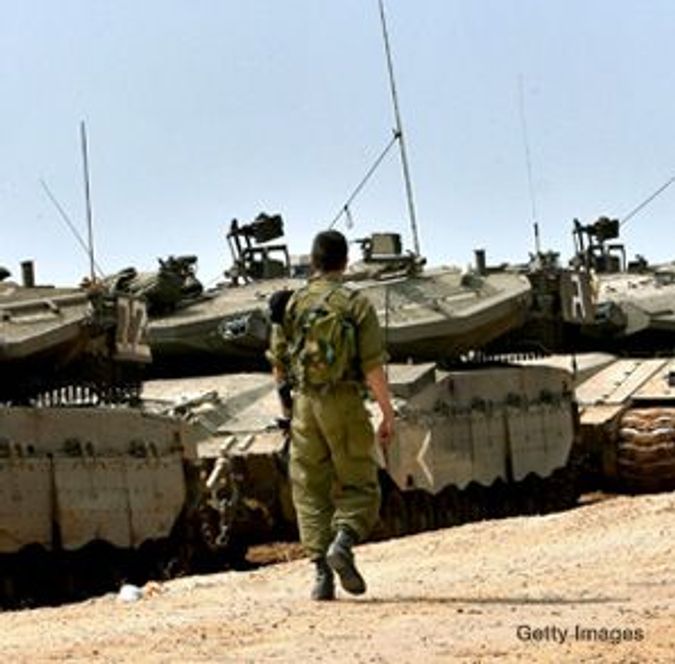 Battle Lines: A column of ISrael tanks lined the Gaza border March 3, during incursions into the Hamas-run strip to halt rocket fire which more than 100 Palestinians were killed and hundreds wounded. 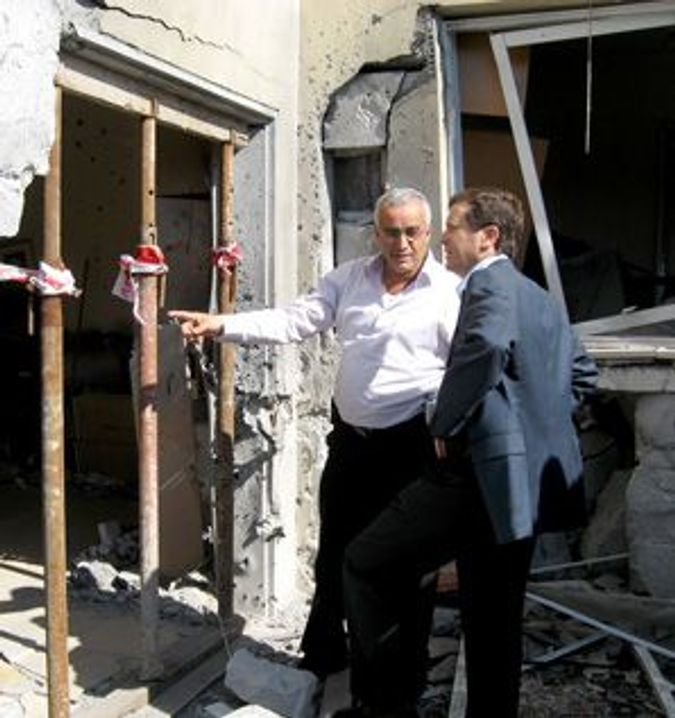 The Circle Widens: The mayor of Ashkelon, Roni Mahatzri, shows a member of Knesset one of the many scenes of destruction in his city after Hamas extended the range of rockets being launched from Gaza.

She traded her high heels for flats earlier this week, after Ashkelon, where she is municipal spokeswoman, became the newest target for Hamas rockets. “I can run fast, but not in heels. To be safe, and able to reach a shelter, is more important than being elegant now,” she said, adding that sirens give a warning of only 15 to 20 seconds.

Israelis of all political shades reacted with shock and worry this weekend, as Hamas showed that it is increasing the range of its rockets. Until then, the weapons had been confined to a radius of just a few miles from Gaza, meaning Sderot and the surrounding areas. But this week, they began to fall on Ashkelon, a bustling city of 120,000 people situated considerably farther — 12 miles — from Gaza.

Another new target, Netivot, is a Negev development town like Sderot and home to 25,000 people. The head of municipal security there, Erez Kidhar, said he has been inspecting bomb shelters and sirens and “passing calming messages to the public,” just as his counterparts in Ashkelon are doing. “Sderot is already used to daily attacks, and so they are now targeting every city in range,” he said. “They are trying to enlarge the circle of panic.”

With the rocketeers’ objective in mind, similar preparations are under way in Ashdod, an important port city of 250,000 people and a hub of Israel’s thriving export business, 20 miles north of Gaza. Experts say that the range will continue to expand.

“It is just a matter of time before they reach Tel Aviv,” said Eyal Zisser, a terrorism expert at Tel Aviv University. “When Israel withdrew from Gaza, rockets from there could reach few spots in Israel. Then they got to Sderot, and they can now reach Ashkelon and Netivot.”

According to the Interdisciplinary Center in Herzliya’s Ely Karmon, who has written widely on Hamas and Hezbollah, it may not be just the seaports that are in danger. Karmon believes that Hamas also has the capability to target Ben-Gurion Airport. It also has anti-aircraft missiles, he added, saying that the organization “does not like to show all its cards at once.”

While many of the Qassam rockets sent to Sderot are homemade, the projectiles reaching farther are 122 mm Grad rockets, better known as Katyushas. They are manufactured to military standards by the conventional arms industry.

The Grads are thought to be arriving in Gaza from Egypt through tunnels, part of what Zisser and other experts are calling the “Lebanonization” of Gaza. “What Hamas is trying to do is to turn Gaza into another Lebanon, where terrorists have an arsenal of weapons used to deter Israel from entering Gaza and to ensure they can do what they want,” Zisser said. “They will use the weapons to provoke Israel.”

Indeed, Gaza already resembles Lebanon in some respects, “though the Lebanon of 1990, not of 2006,” said Jonathan Spyer, a Middle East expert based at the Interdisciplinary Center. “Hamas is at a much earlier stage than Hezbollah, if you look at the equipment and fighting abilities of the two.”

“This is for obvious reasons,” Spyer said. “Hezbollah was created by the Iranians and given a lot of money to become what it is.”

Although Hamas may be almost 20 years behind Hezbollah, it is likely to catch up quickly. If left unhindered by Israel, Spyer said, it could do so in just five years.

The reason for this is that while religious differences have traditionally stopped Shi’ite Iran from offering extensive help to the Sunni Hamas organization, a “strategic relationship” has emerged, largely since Hamas showed its power by taking control of Gaza, Spyer said. “Iran is now providing lots of money, lots of weaponry and lots of training,” he noted.

There is another parallel between Lebanon and Gaza, Karmon said. The objective of Hamas today reflects the aim of Hezbollah in 2000, namely achieving a cease-fire and then using the calm to build up its arsenal.

According to Karmon, Israel’s own priority in the short term is to stop current attacks. Still, “the most important target for Israel is the border between Egypt and Gaza, where it needs to stop weapons going into the Strip.”

These two objectives might explain the mixed messages coming from Israel. On Wednesday, March 5, Prime Minister Ehud Olmert told reporters: “One thing should be clear: If there is no Qassam fire on Israel, there will be no Israeli attack on Gaza. We do not rise in the morning and think about how to attack Gaza.”

Just two days earlier, however, Foreign Minister Tzipi Livni told foreign ambassadors that Israel wants to “change the rules of this game,” and will refuse to stop “operations” against Hamas after the organization ceases attacks. The point has been reiterated on other occasions.

In Karmon’s opinion, there is little chance of a cease-fire. A likelier course of action is that rockets will continue to fall, and that if “at some point in the next few weeks” there is a serious attack, public opinion will pressure the government and “Israel will take control of Gaza’s border with Egypt, to stop the weapons coming in.”

In Israel’s southern cities, this means preparing now for later attacks. The challenge of the latest development is that areas that had been considered safe are now at risk. Even Ashkelon’s Barzilai Hospital, where wounded Israelis from Sderot and Gaza are taken for treatment and recuperation, today finds itself in the line of fire. Some wards have been evacuated and moved into sheltered areas.

“Here in the hospital, we hear the sirens in Ashkelon and immediately get ready to receive injured people,” spokeswoman Leah Malul said. “It can be just three minutes before ambulances come in. For those of us on the staff who live here, our first thought is, ‘What about our families?’ But the pressure of our work here means we can’t even call.”