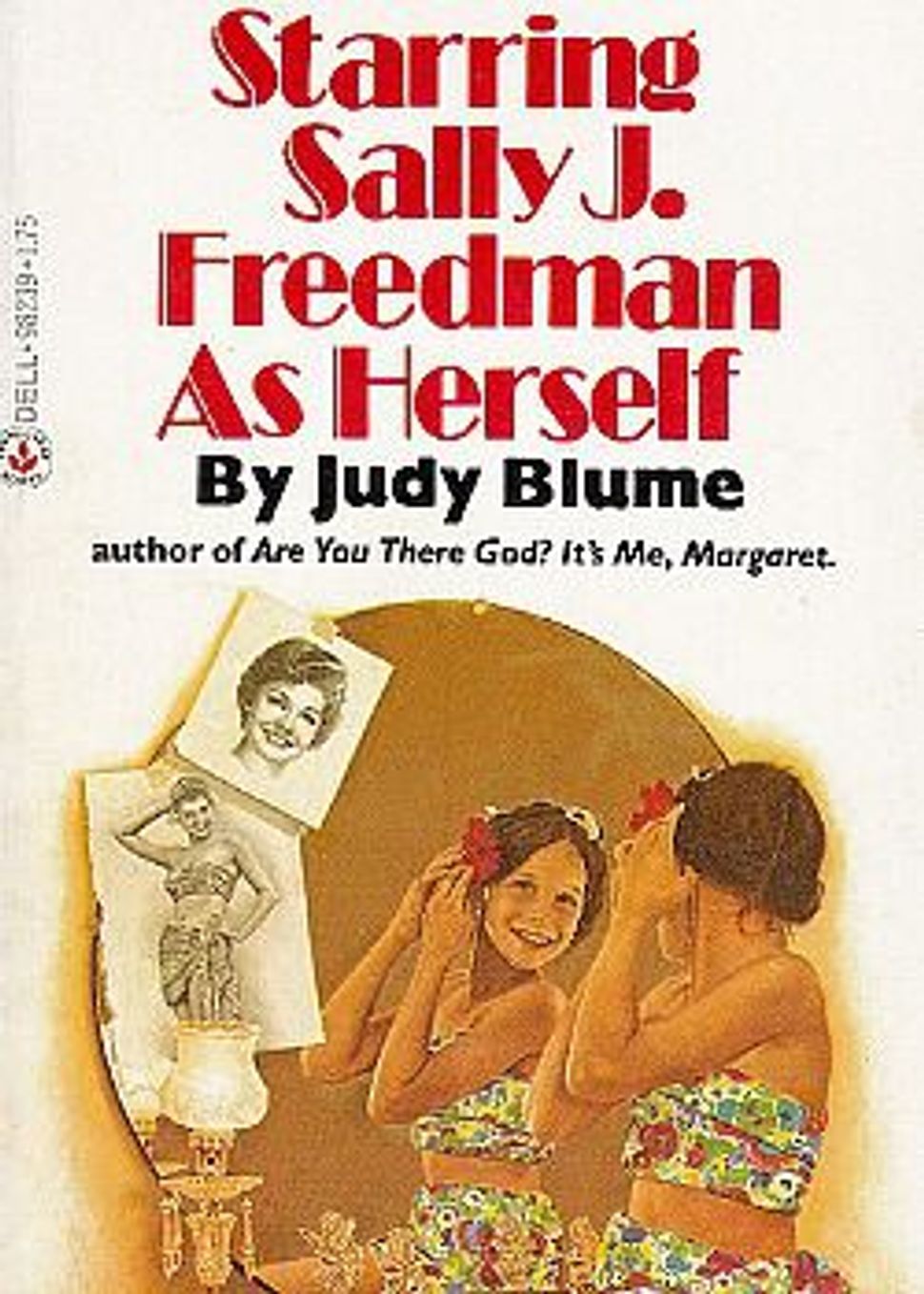 I’m often that person who gives books to children as gifts. They probably groan when they open them, but I’m usually out of earshot by then. As a kid, I was thrilled when a relative made a tasteful selection for me. There are a few more nights left of Hanukkah, so if you’re in need of a gift for a girl with at least a passing interest in Jewish culture — or just a gift for no particular occasion at all — here are eight suggestions culled from a 1980s girlhood spent devouring the local public library. All of them were written by Jewish women and some of them do, inevitably, deal with complex and painful themes, but none feature characters who send text messages. Did I leave out your favorite? Add to the list in the comments section below.

1) “Starring Sally J. Freedman As Herself”
Judy Blume, ages 9 and up

“Are You There God? It’s Me Margaret” gets all the girly attention — and it, too, carries a Jewish theme — but “Freedman” is Blume’s Jewish masterpiece. Picture a ten-year-old New Jersey girl in 1947, whisked to Miami with her family (including her Yiddish-speaking and avid Forward reading Bubbe) so her brother can recuperate from Nephritis. She imagines her next-door neighbor to be Adolf Hitler in disguise — a side-effect of having a severely over-protective and paranoid mother. Sally is clever, yearns for glamour, and is always eavesdropping on the grownups. I may have signed letters I sent from summer camp in 1993 with the valediction “Love, and other indoor sports,” as cribbed from Sally’s own correspondence, even though I had no idea what that meant.

2) “There’s No Such Thing As a Chanukah Bush, Sandy Goldstein”
Susan Sussman, ages 8 and up

I’m not entirely sure why my mom bought this book for me; I don’t recall ever experiencing Christmas tree envy. But this empathetic and instructional story about a little girl named Robin will certainly lend a hand to Jewish parents with kids who eye their classmates’ holiday accoutrements with jealousy. I sort of want to post a link to this book on the Facebook pages of people who’ve provided evidence this week that, in fact, there is such thing as a Hanukkah Bush, but that wouldn’t be in the holiday spirit.

“Why are parents so inconsistent? One day we had bacon and eggs for breakfast, and the next day my mother said I couldn’t go to school because it was Yom Kippur. That is the most important Jewish holiday of the year, and suddenly my parents remembered that we were Jewish.” So begins Hurwitz’s story about Gerry Flam (Ellis Island-ed from Pflaumenbaum) and her nascent curiosity about her heritage in the face of minor anti-semitism in the Bronx. As a kid, it didn’t occur to me that this book reads as a cautionary tale for parents committed to non-observancy who tell their children that they can choose their own religion when they grow up (if they want to).

Much has been written about this horrifying Holocaust book. An eye-rolling tween is sick of her grandparents’ survival stories, so when she goes to open the door for Elijah during their Seder, she gets her just desserts: magical transportation through time and space to a shtetl, and then a concentration camp. As she’s about to enter the gas chamber, she tumbles again through the space-time continuum and ends up back in the doorway of her grandparents’ house chastened and humbled. This book gave me nightmares and further deepened my curiosity about my family’s’ history. But it also gave me something else: a mind-blowing sense of time travel that spurred an interest in science fiction plot lines. This book is probably better suited for 11 and 12 year-olds than 8 year-olds.

The goyim get “Little House on the Prairie” (which I also adore), and the Jews get “All-of-a-Kind Family.” Both series can be purchased as box sets, but here I’ll tell you about book number one of this five-book series. Sisters Ella, Henny, Sarah, Charlotte and Gertie are growing up Jewish in turn of the century Lower East Side. Nothing really bad ever happens to them. They eat pickles out of barrels and barter with peddlers. They daven. They make do. The make games out of doing chores (How badly did I want my mom to get me a feather duster and hide buttons in nooks and crannies for me to discover, after reading this book? Yet, she knew the novelty would last but a day.). The descriptions of old-timey food, accents, and clothing in this book are endlessly appealing to little girls.

More than a picture book about Thanksgiving, “Molly’s Pilgrim” focuses on the acute pain of being an immigrant child in a homogenous classroom. Molly is taunted and bullied, and her school project comes out looking all funny. Instead of making a model of a pilgrim like she’s supposed to, she comes in carrying a little Russian babushka that looks not unlike her mother. Luckily, her teacher catches on: Molly’s family is made up of real life pilgrims who fled their homeland in search of freedom from religious persecution. Cohen sneaks in a brief history lesson about Operation Exodus, the campaign that raised money to bring more than one million Jews from the former Soviet Union to Israel and North America in the early 1990s.

Lynne Reid Banks — didn’t she write those “Indian In The Cupboard” books? Why yes, yes she did. Turns out she also lived on a Kibbutz for a large part of her life. She wrote ‘One More River” in 1973, but revised it thoroughly in 1992 — it seems that the contextual politics of the book’s setting kept shifting. But, she hasn’t revised it again. The basic story is this: “Jappy” Canadian teen Lesley is forced to make aliyah to a Jordan-adjacent Kibbutz Israel with her family right around the time of the Six Day War in 1967. The family leaves behind Lesley’s brother, who converted to Catholicism. The book focuses on whether Lesley will ultimately reject or embrace Judaism as she suffers the crucible of a new, harsh life without any of the social and material comforts of home. Naturally, Lesley develops a thing for an Arab boy whom she espies just across that narrow river.

We’ve covered Operation Exodus, but here’s another harrowing tale about Operation Moses — a brief and secret mission by the Israeli government in 1984 to stop the genocide of Ethiopian Jews by transporting some of them from Sudan to Israel. This novel tells the story of an Ethiopian 12-year old girl, an orphan named Desta. She must make the journey from Ethiopia to Sudan, and largely on foot. Fraught with peril and tragedy (Desta buries a brother on the way to Sudan), this book is probably best for slightly older readers, but I can’t overstate how moving it was to my ten-year-old heart to imagine black Jews in Africa going to synagogue and saying the same words I said in shul in Los Angeles. And to know that this was based on a true story was almost too much for me to bear. It’s not a bad thing for children to know that even today there are Jews who are persecuted around the world.