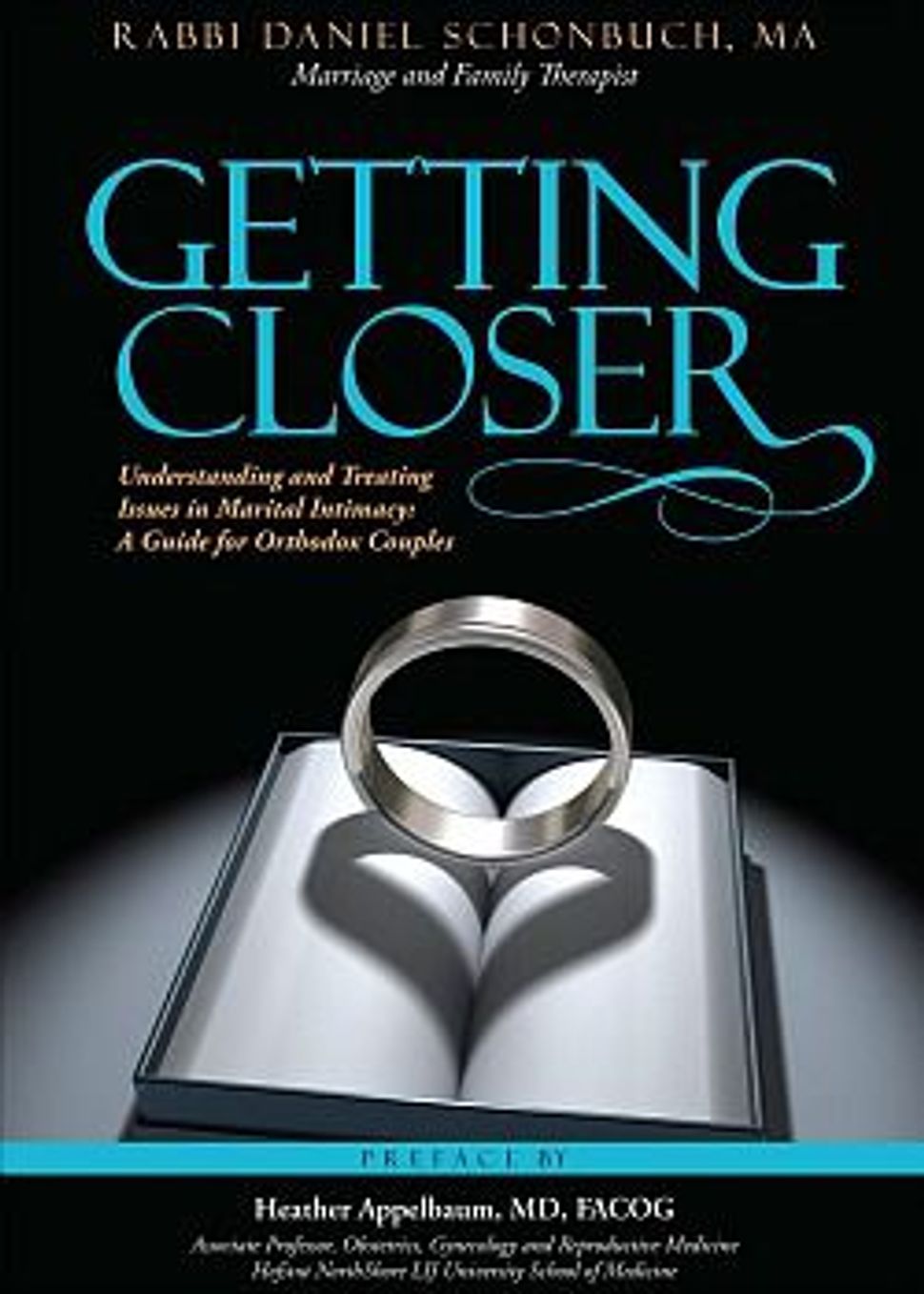 Sexual dysfunctions within relationships are more common than ever today, with an estimated 40% of women and 30% of men suffering from sexual dysfunctions, according to a new study from the Robert Wood Johnson Medical school. Many women experience pain during intercourse, which could relate to conditions like vaginismus, dyspareunia, and vulvodynia, while common male sexual dysfunctions include premature ejaculation, erectile dysfunction and other disorders related to anxiety.

In many Orthodox circles, the essence of a couple’s life revolves around having children. Sexual dysfunctions within a relationship could hurt, and possible even cede, the reproductive aspects. Couples seeking counseling might shy away from the subject, a topic not necessarily widely addressed, and with the laws of family purity weighing in, the pressures seem to tack on.

Rabbi Daniel Schonbuch, a marital and family therapist from Brooklyn who specializes in Orthodox couples, has just released a new book, “Getting Closer,” which offers a glimpse of sexual dysfunction issues — from painful intercourse to erectile dysfunction to desire disorders — within the Orthodox community. He discusses marital intimacy using an approach called Emotionally Focused Therapy to help Orthodox couples through difficulties in intimacy, which can be the underlying issue of much of marital stress. The Sisterhood spoke with him about his new book and some of the unique issues the Orthodox community faces.

The Sisterhood: How long have you been treating Orthodox couples with marital issues and why did you decide to treat this population?

RABBI DANIEL SCHONBUCH: About five years now. I chose to specialize with Orthodox couples because I myself am Orthodox and I wanted to bring the ideas I’m learning from the field of marriage and therapy into the Orthodox world. I practice marriage and family therapy, which looks at the system of a family unit, whereas traditional psychology looks at individuals. This type of therapy is very helpful for the Orthodox community, since they typically have large families, and it addresses family issues they might face.

Where did the inspiration to write this book come from?

In my counseling, I’ve being using Emotionally Focused Therapy, which deals with attachment issues, addressing early childhood attachment and its impact on adults’ attachment to help them deal with stress. I used it for many couples in New York, and since emotional attachment leads with physical attachment, I see it helping with intimacy with couples. I realized I could sit with a couple for several sessions and they’ll never bring up their problems of intimacy. They talk about their financial issues and their mortgage, but not about what’s really the struggle. This book utilizes my training to help couples deal with intimacy problems that aren’t always spoken about.

What are some common sexual dysfunctions in the Orthodox community?

It’s important to note there’s nothing different about the Orthodox community. Rather, it’s not always spoken about, so they just need more information about it. What I see, mostly, is that women in their twenties have a problem of painful intercourse. It has several names like vaginismus and dyspareunia. It affects some 30% of women and is a huge issue. Some girls continue to have relations while in pain, without realizing they can fix this with medical help or by speaking to therapists to ease out their anxiety.

With young men, I mostly see those suffer from premature ejaculation. It’s a huge problem, especially because the result is the spouse withdrawing, which causes feelings of rejection. I try to help them work through it, either through therapy, or by suggesting medical help to look for other problems.

Is it easy for people to talk about these difficulties?

It’s not easy for them to talk about, which is why I wrote the book. Instead of bringing up these painful topics, they’d be able to read about it. Because honestly, sometimes, no matter how good the therapist is, some people can’t be relaxed enough to talk about it. Here, they can read it on their own and decide how to address their problems from there.

Has this area been addressed in recent years?

It wasn’t always, but I’m seeing a significant change now in the community, amongst Orthodox couples who are more educated today and becoming more aware of these kinds of issues. It’s definitely a process that’s taking time. When it comes to sexual dysfunctions, Orthodox couples will often feel a sense of isolation and shame, and don’t know who to turn to since it’s not a topic that can just be widely discussed.

Is sexual dysfunction spoken about enough in the religious world?

No, I think it’s an issue that some people don’t want to talk about. This book engages a community that doesn’t necessarily feel so comfortable with it, but needs to. I’m noticing a large increase rate in the last 10 years of divorce in the religious community. Some have estimated the divorce rate is now almost at 30% for religious couples. Sexual problems can turn into relationship problems and could be a reason why the marriage doesn’t work. Couples need to talk about what they are going through, but the intimacy needs to be healed as well.

Is your book a guide, with solutions, or is it more about teaching people about the problems?

I deal with a lot of different topics in the book. I talk about problems I see clinically: painful intercourse, intimacy after pregnancy, infertility, sexual abuse and Internet addictions. The information is there so couples can actually know it exists, instead of thinking there is something wrong with them and they are suffering this alone. It’s a way for people to read about it and understand. But it’s just an introduction. I tell readers to seek therapy, or go to gynecologists. The book is supposed to educate them to get more educated.