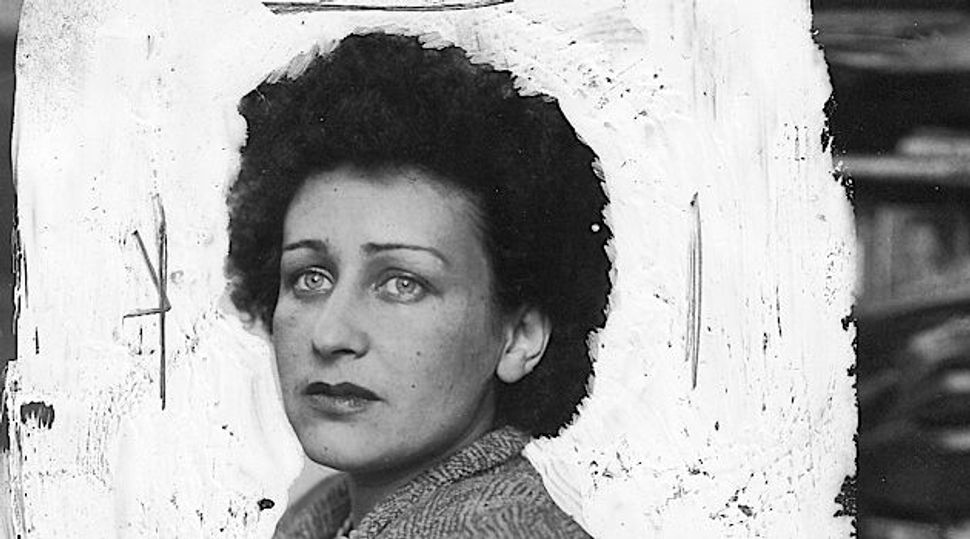 Publisher Heinrich H. Glanz created the Juedisch-Politische Bibliothek [Jewish-Political] series of books in Vienna before it was “confiscated” after Nazi Anschluss in 1938. After emigrating to safety in Washington Heights, New York City, in 1949, he released “Passport to the Past,” a 126-page novella by Regina Kolitz. The book promised a “tale of an indestructible love between an Arab and a Jewess.”

Set in 1930’s Palestine, where Kolitz herself settled, the novella sets the main character, Rina, adrift between her romantic suitor, Pierre whose upper class family hails from Alexandria, Egypt and her father, scion of a Rabbinic dynasty back home in her native Lithuania. But such conflict pales in the face of Rina and Pierre’s passionate bond and we are convinced to read on by the cover flyleaf text stating that “exaltation is all that remains.”

Posed in an archival image besides a desk in the Forverts offices sometime in the 1940’s, Kolitz herself similarly appears to a deeply romantic figure. Despite or perhaps because of the white paste-up ink blocking out more of the background in the image, with her wide light colored eyes focused just slightly offside the camera’s lens, full lips not quite framed in a pout, her arty bohemian halo of tight curly hair and herringbone patterned jacket — she herself is simply put — exalted looking.

Her novella locates most of her scenes in chic Tel Aviv and her descriptions of it are oddly still apt. Here’s Kolitz describing her character Rina’s vision of life in 1930’s Tel Aviv:

I was young and pink cheeked, but Tel Aviv appeared still younger and her colors fresher. From the window of a little hotel I watched the Tel Avivians, promenading to the seashore after a day’s work. Elegant ladies who seemed to have stepped from the Salons of Patou and Chanel; majestic, slow-moving Patriarchs, lovers arm in arm; energetic-stubborn-faced pioneers, Arab youth in bright red fezes. All descending to see a savage sun sink into a storm-tossed sea. Violet, purple, grape red and fiery pink—and suddenly night!

Rina soon finds an office job at the Jaffa port where, under the influence of her levantine surroundings, she enjoys fantasies of harem-life. In her daily reality, however, she finds herself having to fend off the unwanted harassment of the elderly business owner.

In Kolitz’s hands the young woman has no trouble presenting a strong self image:

Suddenly from the fantasy of the Harem I returned to the drab routine of my office. My elder employer, a moustached patriarch of seventy, would lose his strict business-like-expression when no one but myself was present. He would steal over to me and would place his fatherly hands either on my head or shoulders. Encouraged by my failure to object—since in my innocence it did not so much dawn on me, that his designs were anything but paternal, he would sometimes become annoying, and with an impatient voice I would say: ‘Unless you stop this nonsense, I shall leave immediately.’ And his roving hands vanished as if by magic.

And it would take even more conjuring to vault over the daunting themes of inter-ethnic intimate relations in conflict fraught Palestine. Such strength of character comingled with a passionate lust for life seems to electrify the love scenes as well:

His loving lips on my hands and face closed the doors of my mind one by one. No passage remained opened, except the one which led to comfort. Enveloped in peace, I sank in his embrace and fell asleep.

Born to a rabbinic family of 9 children in Alitus, Lithuania, Kolitz was a visionary chronicler yet again for modern Israel, when she wrote one of Israel’s first books on Yoga, a foundational text still in use to this day. According to a surviving nephew, David Kolitz, Regina was “the beauty queen of Berlin in the 1920’s, friendly with leading Jewish figures there.” Settling in Jerusalem, she turned her talents to education, he noted, and tutored the children of the exiled King of Ethiopia. She died at the age of 92 in Petach Tikva in 1999.