My sister was a master knitter. When she died, I picked up her needles — literally. 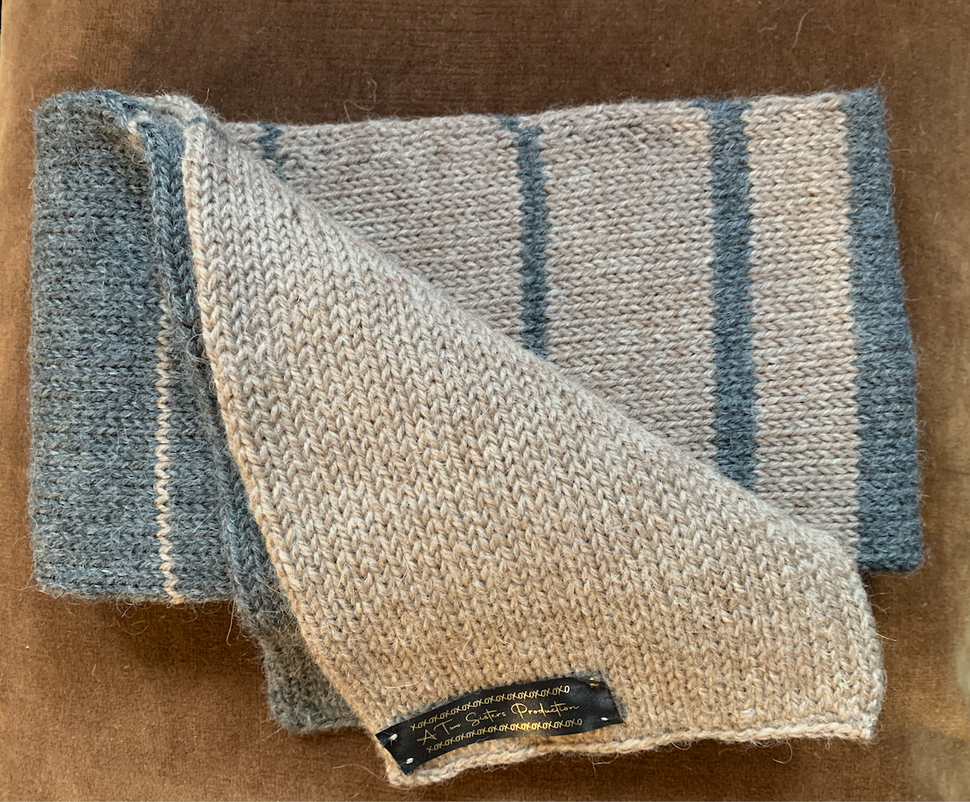 I had no idea what it was when I discovered the cylinder of striped wool in my younger sister’s knitting bag shortly after she succumbed to cancer two years ago at 56.

Knit from the creamiest of wools, the tube featured alternating bands of gray and brown in no discernible rhythm. It was 33 inches long but wanted to be longer; the needles had paused mid-row, ready to be picked up again. The shape allowed me to insert an arm in each end and shake my own hand. But it was much too long to be a hand muff or leg warmer, even for one of my sister’s favorite Boston Celtics.

Was she working on a costume for one of her kids? Maybe it was meant to warm the trunk of someone playing Horton the Elephant?

I stuffed the mysterious mess back in the knitting bag with other unfinished projects and tried to learn how to knit and purl myself, attempting with every stitch to be a little bit more like my missing sister, even though the effort hurt. Every click of the needles reminded me of her, conjuring anew all the things she had said and made to warm us and wrap us in beauty: a chuppah for my daughter’s wedding, a talit bag for our father, afghans for the kids.

My sister, Jillian Kay Segal, was a Harvard MBA and married mother-of-three, who had lived in cancer’s shadow for 38 years, since we were both students at Princeton. When she died on Yom Kippur in 2019 – while listening to services via livestream from her hospital bed – she was two years into a rabbinical program at Hebrew College in Newton, Mass.; the password to her computer was “GonnaBeARabbi2023!”

When she was alive, Jill never gave up on my feeble attempts at knitting. After her death, I found other smart women to pick up the thread where she had left off.

Some of these teachers I discovered on YouTube. Some came from Ravelry, an online community of 9 million “yarn-loving friends.” Another I met at the aptly named “Genius Bar” at the Apple store in the mall. She fixed my phone so swiftly, I asked her if she could fix the knitting I had schlepped in anticipation of a wait – and she did. One especially gifted mentor, Sheila Fee, I found at Flock, a tiny, heartwarming shop in Nantucket filled with exquisite knitted items she teaches visitors how to make.

I started small. I made lots of hats and a baby blanket. Horizontal stripes, I discovered, were not that hard. Vertical stripes are still not in my repertoire. I completed my first sweater this summer, along with a dress for some unlucky child – the wool is scrumptious to behold but likely to itch.

Then, a few weeks ago, I purchased instructions for a plaid scarf in which the designer recommended knitting a tube that would eventually be sealed at both ends. This would hide messy color changes inside a warm, two-ply garment.

I suddenly realized that my sister must have been building a scarf in this ingenious fashion. But I still could not fathom if there was a pattern to the stripes.

Finally, I counted the number of rows of gray and brown and felt the tug of something familiar. The gray block that began at one end was followed by a single row of brown, then more gray, then another lonely row of brown, then more gray, and so on, except when the next flashes of brown appeared, there were 2 rows of it, then 3, 5, 8, 13, 21 and 34.

Hooray! I thought. My sister’s muse had been Fibonacci! Each new number in his famous sequence equals the sum of the two numbers before it. So, in this case, each stripe’s size was determined by adding the rows of the two prior stripes in that color. The gray decreased from 55 rows to 1, while the brown was increasing from 1 to 55. Thanks to this revelation, I was able to find the pattern on Ravelry that my sister must have been following. The details matched precisely.

Jill, I now saw, had stitched everything but the last 42 rows of brown. Marking where she had paused, so her hand in the creation would be forever clear, I completed the missing rows, joined the edges, and sewed on a label that read, “A Two Sisters Production.” Over Thanksgiving, I returned the scarf, ready to wear, to my brother-in-law, David Segal, before another Boston winter set in. 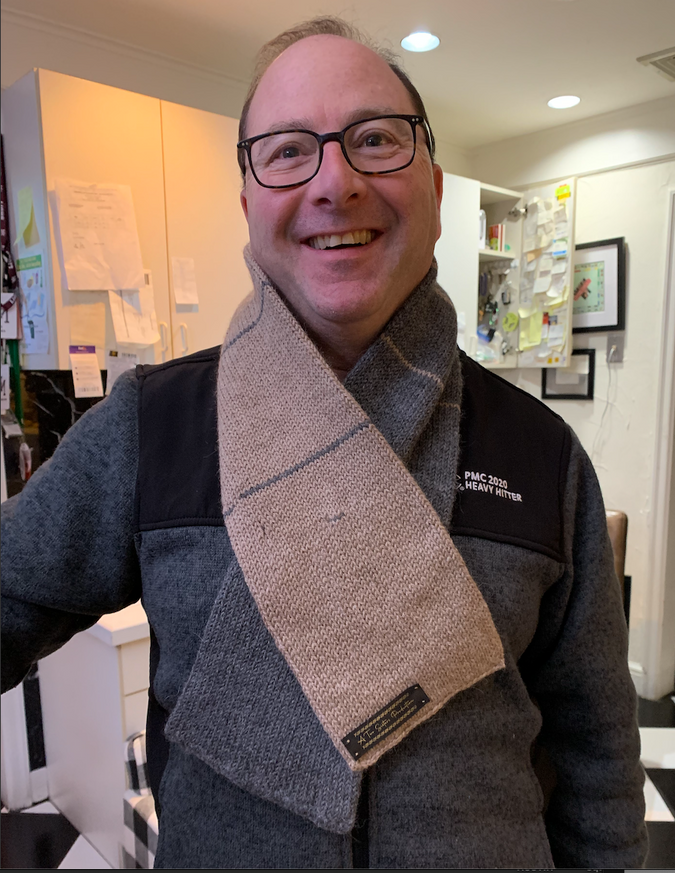 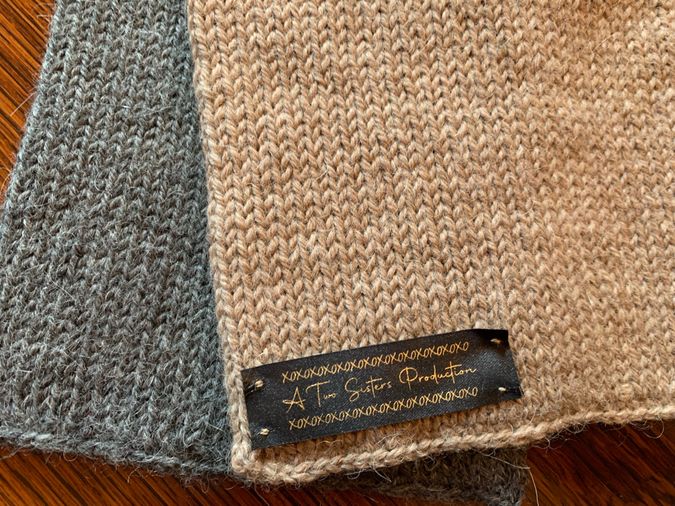 The label on the scarf, reading “A Two Sisters Production.” By Alison Leigh Cowan

The world is a messy place, one that demands constant mending and repair. We Jews call the process of fixing its broken pieces Tikkun Olam. This is a never-ending, monumental task, and it is easy to lose heart.

When Jill finally succumbed after nearly four decades of fighting the beast, it ripped a hole in our family too big for me to sew and deprived the world of someone so eager to succor others she started rabbinical school in her 50s. After her death, a friend comforted me by sharing the words of Rabbi Tarfon in Pirkei Avot. The ancient sage advised, “it is not up to you to finish the task, but neither are you free to exempt yourself from it.”

With knitting, as with all things, we are merely obliged to start the work, understanding that someone else may have to pick up where we most assuredly will leave off.

Alison Leigh Cowan, a former reporter and editor at The New York Times, is a writer and researcher based in Connecticut. Her sister, Jillian Kay Segal, lived in Needham, Mass., and belonged to Temple Aliyah, which continues to use a challah cover she stitched.

My sister was a master knitter. When she died, I picked up her needles — literally.