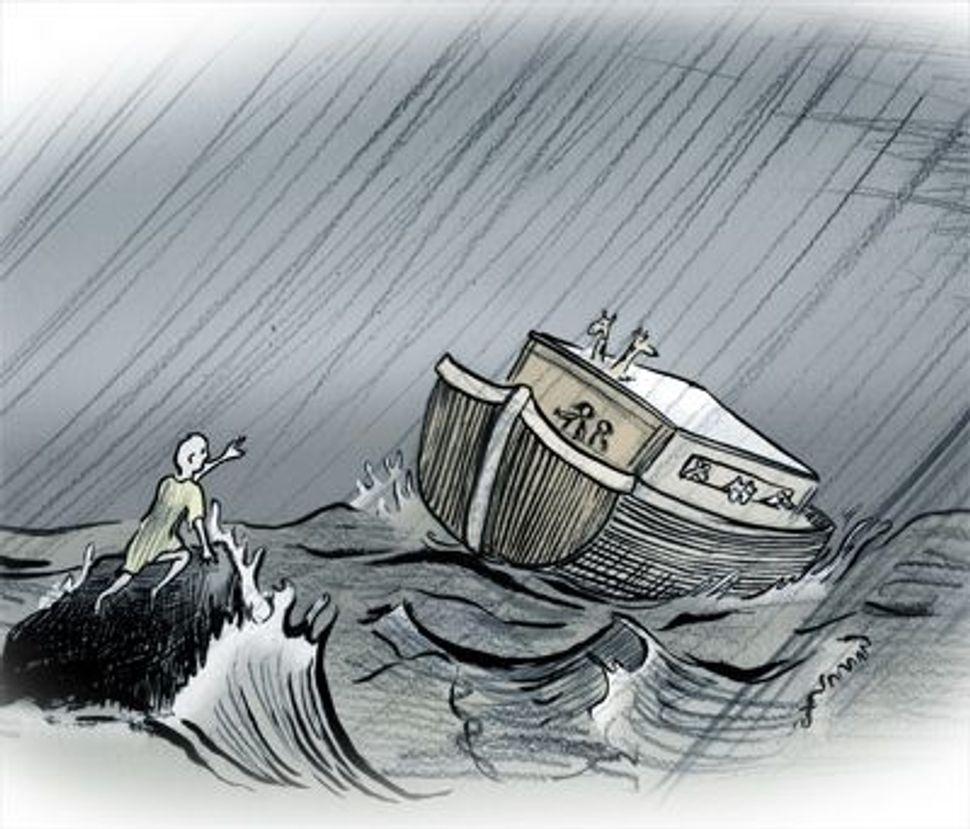 I’ve been thinking a lot about resilience lately. When faced with adversity and horror, why do some people crumple like used tin foil while others manage to cope?

The story of Noah and the Ark is an interesting window into the notion of resilience. Maxine, age 4, is obsessed with a book by Lucy Cousins, the author of the Maisy books, about Noah’s Ark. She loves pointing to and naming the animals, and making sure each one is properly paired up, two by two. What’s the appeal for her, and the appeal of Noah, to so many other children? Recently my mom wrote a rockin’ D’var Torah about Noah that she shared with me. She says Noah is a story about safety… which is funny since on the surface it’s pretty terrifying. 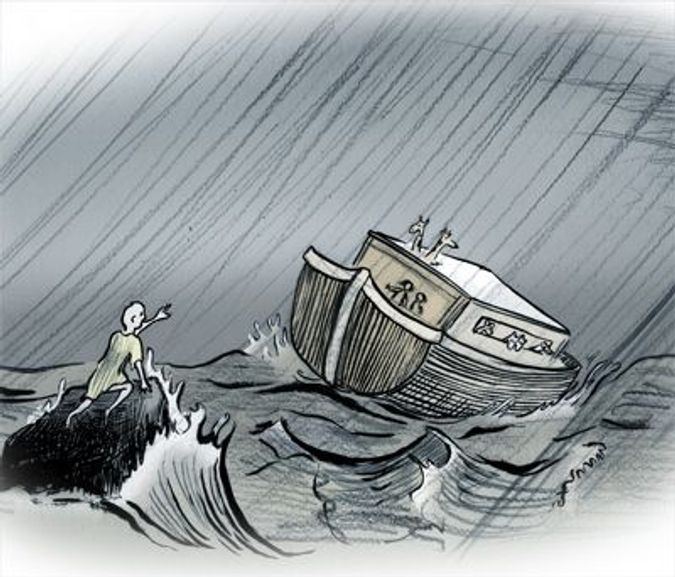 You probably recall the plot: God gets saddened at humanity’s wickedness, tells Noah to build an ark and fill it with animals, sends a flood, destroys all non-arked life on earth. Ark floats for 150 days and lands on a mountain. God hands the planet back over to Noah and his descendants and sends a rainbow. Got it. But do you remember what comes next? Noah builds a vineyard and gets wicked drunk, then something cryptic and untoward happens with nakedness, and Noah curses his son Ham.

Well, that’s awfully chipper! And yet, as Mom pointed out, a quick Google search finds 815 children’s books about the story. You can find stuffed plush toy arks and plastic ones, posters and wall hangings, wall decals and stickers. What’s going on here?

What’s happening is that people take what they want from the story and ignore the rest. Mom asked Josie (age 7) if she knew the tale. Josie answered, “Of course,” and retold it thusly: “God brings about a flood to wash away the bad people, but he tells Noah first because he is good, and Noah collects all the animals in the ark, and then he sends out a dove, and the dove finds a branch which means there is land, so they land safely and God sends a rainbow as a promise he won’t send a flood again.” And why do kids like this story? According to Jo: “They like animals. They’re cute! And they like rainbows.” So there you have it.

Mom points out that this is pretty much the canonical kid version. And she thinks its huge popularity is due to its role as “a Bildungsroman for babies.” In other words, it’s a coming-of-age values-conveying story. Children see themselves in the animals in the ark, being saved and cared for and fed and protected from the world by Noah the parent-figure and caretaker. He gets them ready to leave a protected place for the big wide world.

Mom points out that we love buying Noah’s ark stuff for the nursery because we see these objects as talismans of protection for ourselves. “By soothing and reassuring them that rain will be followed by rainbows, we soothe and reassure ourselves,” she wrote.

Life is always a balancing act between feeling soothed and reassured and being able to face and cope with hard, ugly truths. I do think some people are better than others at finding ways to self-soothe, compartmentalize and move forward. There’s a bunch of research indicating that resilience is an inborn trait, but also that kids who wind up thriving despite adverse circumstances — like the loss of a parent, or abject poverty, or dysfunction — tend to be kids who find other adults to support them. These adults act as mentors and cheerleaders and offer a sense of stability and hope for the future. Carla O’Connor, an associate professor of education at the University of Michigan, has studied low-income and African-American students, and found that for resilience to develop, kids need positive social models and an awareness of systematic oppression; feeling a need for collective action helps fuel their own success and sense of self.

That makes sense to me. Feeling connected to others clearly enhances self-esteem. Early research into personal benefits of doing good for others came from someone who had every reason to curl into his own isolation: Viktor Frankl, the Viennese psychiatrist who survived a German concentration camp. His pregnant wife, parents and brother were all killed. But Frankl didn’t succumb to despair like many of his fellow prisoners. He found meaning in teaching others how to cope. He taught his campmates to prevent suicides by sharing jokes and songs, telling each other their memories of civilization. And he noticed that the prisoners who survived were the ones who found purpose in their lives. After the war, he urged his psychiatry patients to find meaning by thinking about their connections with others. When they did, they experienced more functionality and happiness. The only way to find meaning in despair is to reach out, connect, contribute.

The Corporation for National and Community Service, a government agency that funds volunteer projects (including AmeriCorps, our country’s national service program), issued a report in 2007 about the huge health benefits of volunteering. The review of 30 longitudinal studies found that extensive volunteering (defined by some as over 40 and others as over 100 hours a year) leads to feelings of life satisfaction far greater than those experienced by non-volunteers. People who help others also experienced lower rates of depression, greater self-esteem, more happiness and life satisfaction, a sense of control over their destinies, even better all-around physical health than non-volunteers. Resilience is fostered by being a helper… like Noah.

And it’s okay to face the flood. When we try to shield our kids from all kinds of trauma — from the awareness of sadness and loss to the frustration of not having an Xbox — we don’t give them the chance to develop their resilience. A very California acquaintance of mine once said, “I don’t want my son to have the experience of no.” Guess what? Kids need the experience of no. An article in the online parenting magazine Babble about childhood vaccination quoted parents who chose not to vaccinate their toddler: “We were just building a rapport with him, a sense of trust,” the father explained. “We had no language to explain to him what was going on.” The mother agreed: “We intuited that it would be traumatic for him.”

Trying to shield your child from all trauma damages his physical and mental health. (Measles is no picnic, and neither is being an overindulged little weenus with “no experience of no.”) After World War II, studies showed that children in London who stayed with their parents during the Blitz did better emotionally than those who were packed off to safety in the country. In his childhood memoir “Uncle Tungsten” (Picador), Oliver Sacks writes about how his experience as a “vackie” (evacuee) triggered fears of abandonment, a loss of faith, and anxieties ranging from the fear of crossing the street to a fear of death.

Stories and experiences that are a little scary help kids face the world. Being a helper lets them see their impact on others’ lives. And backing off enough to let them sit with their discomfort and frustration is essential for growth.