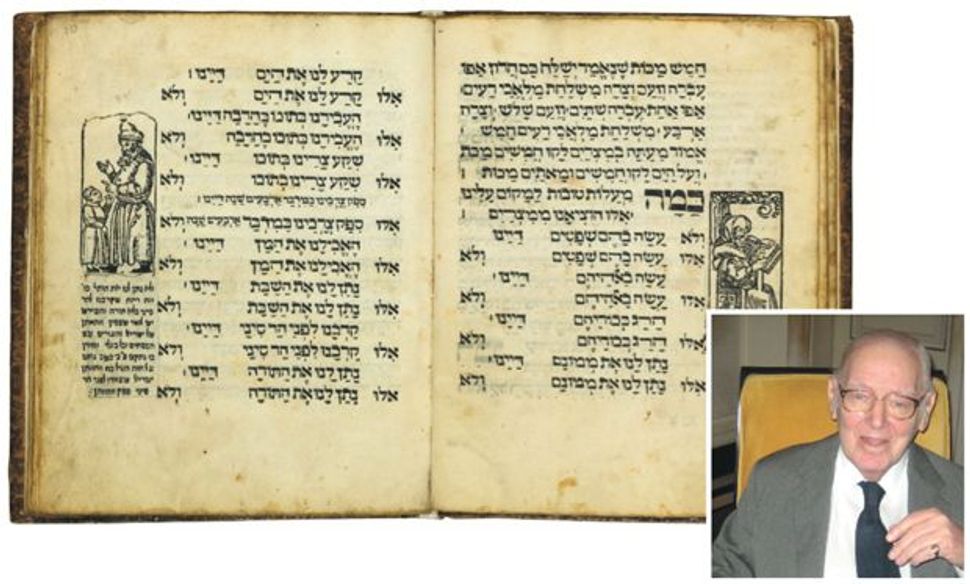 Buy the Book: Collector Jack Lunzer and a 1556 Haggadah from Prague. The volume is one of two surviving copies. Image by COurTESy OF SOTHEBy?S nEw yOrk, THE VALmAdOnnA LiBrAry TruST; inSET: dEBrA nuSSBAum COHEn

Although the world’s foremost collector of rare Jewish books has traveled the globe seeking books printed in the Far East, the Ottoman Empire and throughout Europe, his greatest collecting triumph took place virtually at his front door.

Jack Lunzer, 84, a producer of industrial diamonds from Africa, spent six decades assembling the Valmadonna Trust Library, which he described as “a kaleidoscope of philosophy, liturgy, medicine, every possible story” of the Jewish people. He is now trying to sell its more than 11,000 volumes of Jewish texts through Sotheby’s for $40 million, in a non-auction arrangement.

Collecting “Val,” as Lunzer refers to the library, has been a passion so forceful that he describes it as lunacy. “Lunacy is this,” he said, “spending $2,500 going to look at a book that costs only $300.”

Born in Antwerp, Belgium, Lunzer was raised in London and lives there still in a mansion that had been crammed with the books that he refers to as “my children.” Before being removed for the Sotheby’s sale, the volumes filled every nook, every closet, even an outbuilding in the garden. There, as in the exhibit at Sotheby’s, which ran until February 19, they were arranged according to provenance because, Lunzer said, “It’s the places of printing that tell the story.”

The story of his collection began in 1948 after he married his late wife Ruth, who was from a Milanese-Jewish family. Her father had hidden a small trove of 16th century Hebrew books from around Italy in his basement when he and his family fled to Switzerland during the Holocaust. After the books were retrieved, her brothers asked him to take care of them.

At first, he tried to refuse, Lunzer said in an interview with the Forward at his New York hotel. But as the newlyweds traveled through Italy, visiting villages that “were magical,” he realized that many of those places had Jewish history and the books reflected that history. “I saw in the books the whole drama of Hebrew printing, with all of its implications, social and political.”

The idea entranced him, and started him on his path.

The Valmadonna Trust Library is named for a hamlet, halfway between Milan and Genoa, to which his wife’s family once had a connection, but Lunzer declined to elaborate.

When he began collecting, while he was still in his 20s, Lunzer bought from dealers at auctions, purchasing Bibles and “an abundance of liturgies.” As his business, IDC Holdings Limited grew, so did his ability to buy more expensive works.

Lunzer’s greatest collecting conquest was the Bomberg Babylonian Talmud, printed in 1520 under Papal privilege. It is the first complete Talmud ever printed — becoming all the more rare because on Rosh Hashanah 1553, the Vatican ordered the burning of copies of the Talmud that had been confiscated by the Inquisition. More Church destructions of the Talmud followed.

Four centuries later, in 1956, Lunzer was visiting an exhibit in London on the return of Jews to England. There he saw, to his “horror and amazement,” three dust-covered books owned by Westminster Abbey that had been printed by Daniel Bomberg, the 16th century Calvinist printer of Hebrew texts. One was a volume of the Talmud.

“They were covered with dust this much,” Lunzer said, lifting his hand a foot high. “After I cleaned up one with great care, I saw there had been a great mistake.”

He went to Westminster Abbey’s librarian and asked to buy them, but was told, “We regard our Talmud as part of the Abbey itself.”

For decades, he longed to acquire the Bomberg Talmud. And though he will, in a jolly tone, describe himself as “a heathen,” it turns out that the Talmud’s acquisition is linked to Lunzer’s Sabbath observance.

In 1980, after concluding a business trip to Sierra Leone on a Friday, he urged his employees to fly home Saturday morning, but waited until the end of Shabbat to make the trip back to London himself. Enroute, he read a small item in a newspaper that said the British government had refused an export license to a buyer of the charter of Westminster Abbey.

A New Yorker had purchased the charter that was being sold “by a noble lord whose roof needed repair,” Lunzer said. But since the British government preferred a British buyer, Lunzer saw his chance.

“I called Westminster Abbey and they said ‘we were awaiting your call,’” he said, clearly relishing the memory. Lunzer reimbursed the New York buyer and made a “substantial contribution” to the Abbey’s capital restoration fund.

“Then we handed over the charter to the Abbey. My wife had died; I had my five children with me.” Lunzer said he “didn’t believe … until the last minute” that he was getting the Bomberg Talmud in exchange.

“It couldn’t have happened then,” he said, because Westminster Abbey simply does not part with religious texts, “and it could never happen again.”

Why now does he want to sell the collection, which he has so loved for the past 60 years?

“I’ve been the custodian,” he said. “I cannot expect other people to devote the blood, toil, tears and sweat that it requires maintaining Val. I’ve got my business, my family. For posterity it is time to let it go to an institution that has the funds. These books want the attention,” he said.