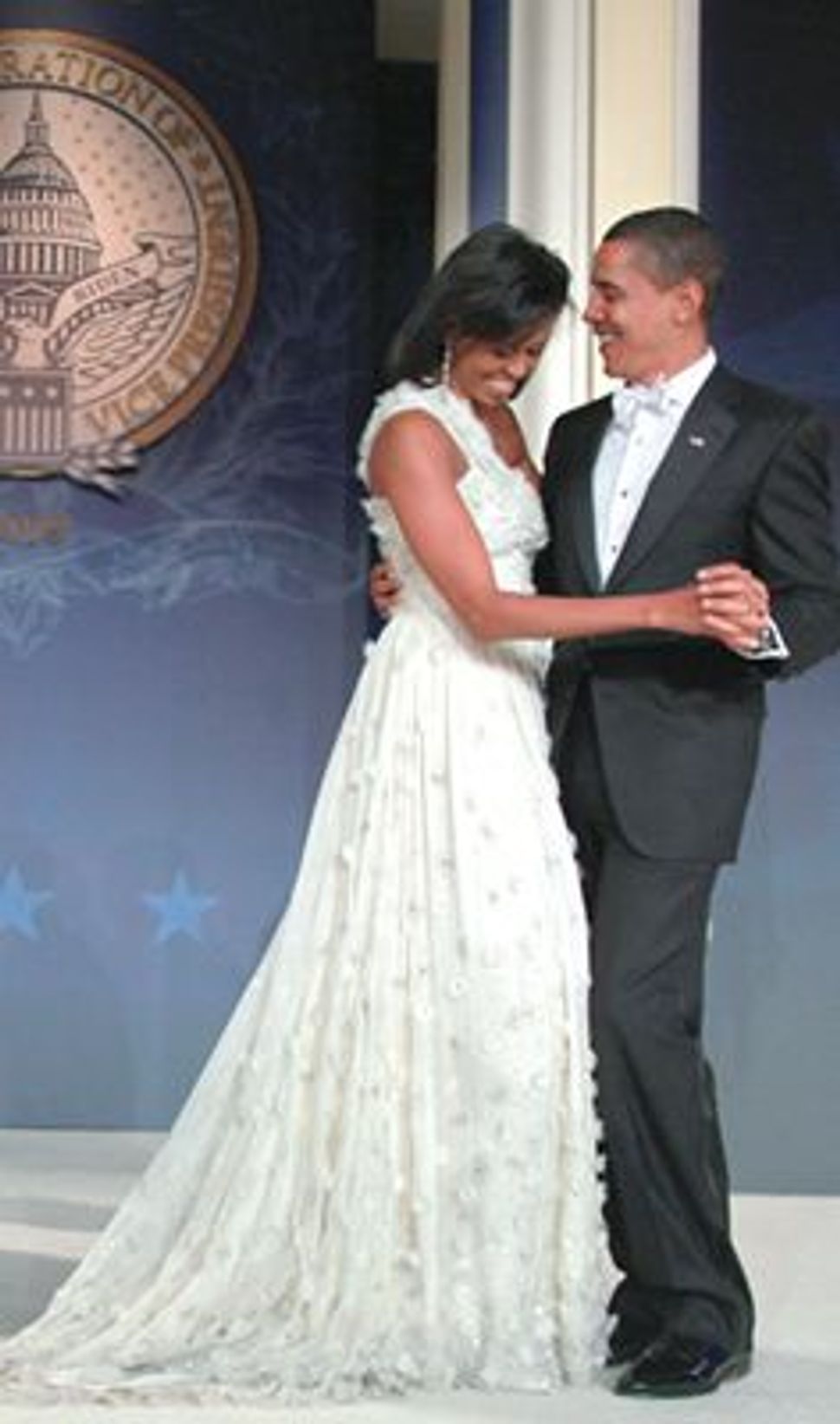 An Israeli-born boutique owner known for putting together edgy outfits in unexpected ways is quietly dressing one of the most famous women in the world, first lady Michelle Obama.

Ikram Goldman, 41, proprietor of the multi-vendor designer boutique Ikram (pronounced Ee-krom), on Chicago’s Gold Coast, is the eminence grise of the first lady’s fashion cred, soliciting sketches and special garments from an array of American-based designers.

Goldman is well known for a discerning eye and a sophisticated mix of edgy American, European and Japanese designers, along with a handpicked collection of vintage clothing and accessories. Though she is keeping a low profile and declines to be interviewed for any article that contains the name Michelle Obama, designers who have seen their clothes worn by President Obama’s wife in recent months are open about the link between Goldman and the “first wardrobe.”

They said Goldman has been requesting sketches for the first lady and having styles delivered to her store. Because designers routinely receive special orders from Goldman, they don’t always know which client she has in mind when she makes her requests.

“She has a real understanding of what women need to wear to get from point A to point B in their life, and she knows how to twist it to make it interesting,” said Sally Singer, the fashion news director of Vogue. Obama is pictured on the magazine’s March cover, joining Hillary Rodham Clinton as the only two first ladies so honored.

Goldman’s fashion-forward taste, her willingness to take risks on cutting-edge designers, and the fact that she buys the most innovative pieces in a collection rather than “safe” items have made her an international force in the fashion world. Her boutique is one of perhaps a dozen independent stores worldwide that play a key role in moving fashion forward, Singer said.

Goldman has always been tightlipped about her clients, and she appears to be equally tightlipped about herself. Friends and former colleagues interviewed for this article — even those who have known her for two decades — professed to know almost nothing about Goldman’s family or upbringing. This is not unheard of in the fashion world, where many of the greatest players are self-invented and nobody cares where you came from as long as you know fabulous when you see it.

What’s known is that she was born Ikram Saman in Israel, where she lived until she was 14. According to an interview published in Chicago magazine in 2006, she came to Chicago with her mother and brother for her mother’s cancer treatments. Goldman was still young when her mother died, and so she was largely raised by a sister, friends of the family say. She attended Catholic schools in Israel and Chicago. She is not Jewish, but she met Chicagoan Joshua Goldman, who is Jewish, while taking French classes at the Alliance Française in Chicago, and they married in 1995. Goldman’s husband grew up in Chicago and is an attorney who has also held senior roles at private equity real estate firms.

Josh Goldman’s parents, Jean and Steven Goldman, are well-known Chicago collectors of 16th- and 17th-century Italian drawings; his mother is a noted art historian. Last June, the Art Institute of Chicago dedicated prints and drawings galleries named after the Goldmans; the galleries join a study center for prints and drawings that was completed in 2002. The younger Goldmans are also art collectors, though they favor contemporary art.

In photos, Ikram Goldman’s perfectly shaped lips are what stands out. But on a recent visit to the store, the bold lips are nowhere to be seen. Goldman doesn’t have much time for lipstick these days, having given birth to twin boys last December.

The 4,000-square-foot Ikram boutique is located on Rush Street, notably a few blocks away from Oak Street, which is the home of independent designer boutiques.

Half of the store’s space is devoted to fitting rooms and alterations. “Most people go to a fitting room, and we bring them things,” explained Shane Petyko, a top salesperson at Ikram. This affords a certain amount of privacy for the boutique’s high-profile clients. A spacious, 10-sided, mirrored area near the dressing rooms is the showpiece of the store.

The vibe is exclusive — the door is kept locked, and a salesperson lets you in — but not precious. The décor reflects both Asian and Moorish influences and also features such contemporary elements as hand-blown glass shapes suspended from the ceiling in the main room, and poppy-red disks that cluster to form a chandelier in the mirrored fitting area.

The store, which opened in 2001, carries such designer lines as Azzedine Alaïa, Balmain, Lanvin, Givenchy, Hussein Chalayan, Narciso Rodriguez, Rick Owens, Alexander McQueen and Junya Watanabe, along with up-and-comers like Jason Wu, Thakoon and Zero + Maria Cornejo. Wu designed the white gown the first lady wore to the inaugural balls and the dress she is wearing on the cover of Vogue.

Isabel Toledo, a 25-year veteran of the fashion business who is adored by fashion insiders but has always been too edgy to hit the mainstream, designed the lemongrass Swiss wool lace dress and coat that Obama wore during the inauguration. “Michelle has been buying Isabel’s clothes at Ikram for years,” said Ruben Toledo, Isabel’s artist husband.

Goldman is partially known for the surprises thrown into the mix. Among the Jimmy Choo, Lanvin and Alaïa shoes are $140 patent leather Doc Martens in neon colors, keeping with a Stephen Sprouse revival that is beginning to sweep through the fashion world. “If Ikram likes something, she’ll buy it,” Petyko said. “We’ve been selling them with $10,000 jackets.”

Goldman is known for being hardworking, tough and outspoken. “For better or for worse, she’ll tell you exactly what she thinks,” said Kathy Taslitz, a customer, friend and sculptural furniture designer.

The new first lady has already set a fashion tone that shows she is confident, poised and a risk taker. Ikram’s fans also include other supporters in the Obama camp, including new White House Social Secretary Desiree Rogers.

The women who shop at Ikram tend to be fearless and to have a flair for style. Jewelry designer Loree Rodkin describes the customers as “fashion forward. They’re risk takers. They have an edge. They like to not look like everyone else. They’re independent.”