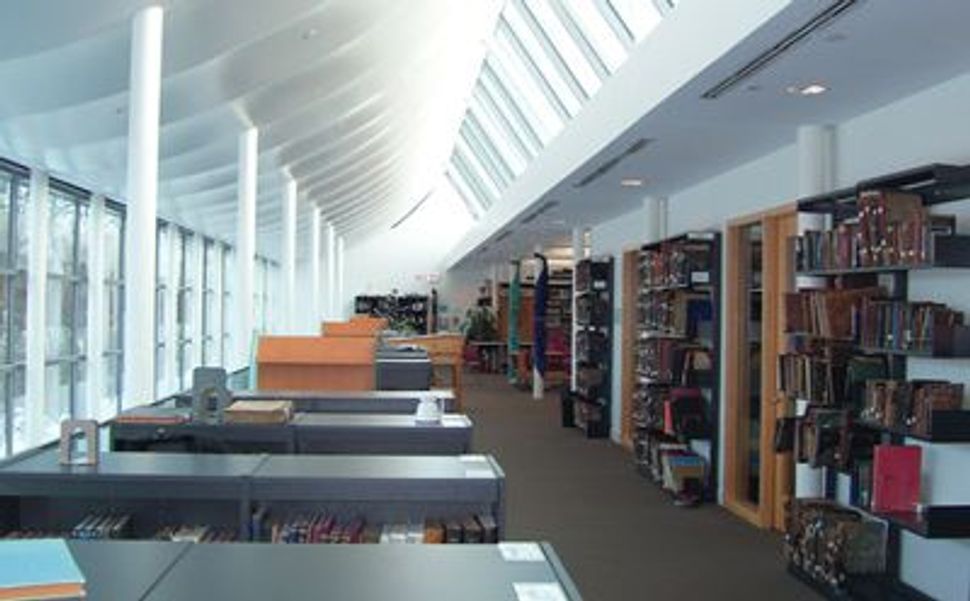 If You Build It?: Hebrew College?s new Boston-area building by Israeli architect Moshe Safdie was part of its ambitious ? and expensive ? expansion. Image by ANTHONY WEISS

Outside the office of Rabbi Daniel Lehmann, president of Hebrew College, is a model of the original design for the college’s Newton, Mass., campus, created by star architect Moshe Safdie. Only half the campus has been built. Asked if the school plans to build the other half, Lehmann chuckled. 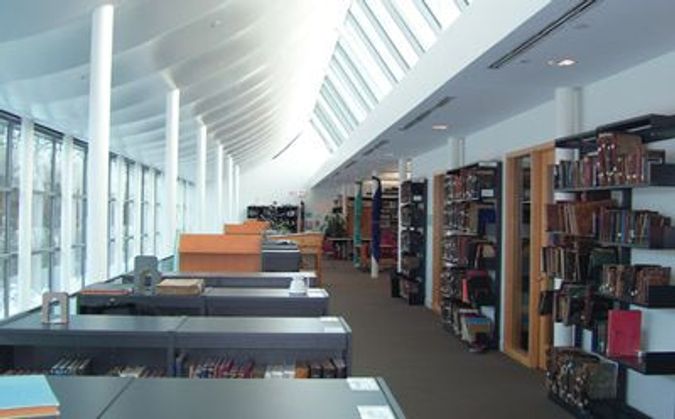 If You Build It?: Hebrew College?s new Boston-area building by Israeli architect Moshe Safdie was part of its ambitious ? and expensive ? expansion. Image by ANTHONY WEISS

Safdie’s model is a relic from the ambitious tenure of Lehmann’s predecessor, Rabbi David Gordis, who expanded Hebrew College from a sleepy local institution into a national powerhouse on the cutting edge of Jewish education. By many measures, the expansion was a resounding success: Hebrew College’s new rabbinical school attracts students from around the world, the numbers enrolled in its supplementary program for high school students have swelled, and its adult education program has expanded as far south as Washington, D.C.

But new buildings are the last things on Lehmann’s mind right now. In fact, Hebrew College is fighting for its life. The school owes tens of millions of dollars and has spent the past two years slashing expenses and staff. With the economy in shambles and fundraising sluggish, the next couple of years may determine whether Hebrew College and other schools like it have any future at all.

“I think that the notion of a community institution devoted to different kinds of Jewish learning is a beautiful one,” said Jonathan Sarna, a professor of American Jewish history at Brandeis University and an alumnus of Hebrew College’s high school and college programs. “The question is, who’s going to fund it? It’s as simple as that.”

The entire concept of a so-called Hebrew college — once a mainstay of Jewish education — is now in peril. Hebrew colleges around the country have had to reinvent themselves or risk disappearing. In January, The Baltimore Sun reported that after years of declining enrollment, 90-year-

old Baltimore Hebrew University was in talks to merge into local Towson University, which would leave the country only four independent Hebrew colleges. In Chicago, the Spertus Institute for Jewish Studies moved into a gleaming new $55 million facility in late 2007 and has reinvented itself as a cultural destination, with a major museum of Judaica, popular films, speakers and a well-stocked scholarly library, in addition to its educational offerings. But even Spertus is still struggling to raise the final $5 million for its new building, and it has had to make staff cuts as well.

“What’s happened in Baltimore and what’s happening in Boston is indicative of larger trends at work,” said Brian Amkraut, provost of Siegal College in Cleveland, which has had to cut its budget by 30% over the last two years. “We’re all searching for the new model that makes sense.”

Boston’s Hebrew College was founded in 1921, one of a number of schools that sprang up across the country in the late-19th and early-20th centuries to train Hebrew school teachers. Founded as secular, academic institutions of Jewish learning, the schools became intellectual centers in the Jewish world, providing higher Jewish education to women and employment for academics before Jewish studies had become a popular field. Eminent scholars such as Isidore Twersky and Nachum Sarna (Jonathan’s father) began their careers at Hebrew colleges. Some, such as Boston’s Hebrew College and Philadelphia’s Gratz College, opened supplementary Jewish high schools.

Enrollment at Hebrew colleges plummeted. Their supplementary Jewish high schools, too, lost their appeal as parents opted either for less demanding programs or for the increasingly popular Jewish day schools.

In 1993, Hebrew College hired Gordis — a former vice president at Los Angeles’s University of Judaism and New York’s Jewish Theological Seminary and a former executive vice president of the American Jewish Committee — to shake up the school, and the entire Hebrew college model.

“Prior to his being here, when you went to graduation, you were lucky to count the people that got degrees on the fingers of one hand,” said Theodore Teplow, a former chairman of Hebrew College who led the push to hire Gordis. “He just brought it to life.”

Under Gordis’s leadership, Hebrew College revamped the languishing Prozdor supplementary high school program and began rapidly expanding adult education programs across the city. Deciding that the college’s quarters were too small, the college bought land in Boston’s western suburbs, closer to the main concentration of the area’s Jewish population, and built a sleek new campus. Gordis brought in renowned scholar and theologian Rabbi Arthur Green to found a transdenominational rabbinical school. In cooperation with the Combined Jewish Philanthropies of Greater Boston, Hebrew College began Me’ah, a popular adult education program. To fuel this rapid expansion, Gordis embarked on a local and national fundraising campaign and borrowed $32 million through a state-sponsored bond program. The budget grew from roughly $2 million a year when he arrived to $19.5 million in 2006. The board laid plans for a second, even larger capital campaign to raise $70 million to complete the campus expansion.

The ambitious reinvention of Hebrew College swelled the ranks of its programs. The Prozdor program, which had only about 125 students when Gordis arrived, now has 760 enrolled. The rabbinical school graduated its first class of 11 students last year and now has 55 students, some of whom come from as far away as London and Panama. Many students said that Hebrew College was their first, or even only, choice.

But although the programs were popular, the money did not follow. Gordis told the Forward that he had hoped the college could support itself and pay off its debts with $7 million a year in donations. But donations never hit that level. Instead, relations with local donors and the Combined Jewish Philanthropies, Boston’s federation, went sour, with each side blaming the other.

“I think that the local community, which never had the reputation of being a great giving community, never stepped up to the plate and took the kind of pride and accepted the kind of responsibility for [Hebrew College],” Gordis said. “That includes the local federation.”

Others argue that Gordis’s personality, his national vision for Hebrew College and his aggressive spending didn’t mesh well with the community.

“I think a lot of people from the community were not necessarily on board, and certainly when the financial challenges became more apparent to people there were a lot of questions as to whether the kind of growth, the kind of expenditures on the building and on the campus and some of the new programs were compelling and justifiable,” Lehmann said.

The college was awash in red ink, often to the tune of millions of dollars, a situation made worse by a complex floating interest level on the bonds the college had issued, which proved more expensive than expected. In 2007, Gordis started making deep cuts, slashing roughly 30 staffers, but the college continued to bleed money.

Hebrew College took on new leadership in July of 2008, when Gordis retired and was replaced by Lehmann, founder of Boston’s successful Gann Academy Jewish community high school, and when Mark Atkins, a local high-tech entrepreneur, took over as the chairman of the board. Lehmann and the board immediately set out to revamp the school’s management and to trim the budget. More staff cuts followed — the library has been reduced from five librarians to one — and the college recently began selling off its collection of rare books. The annual budget has been reduced to about $15 million.

Still, the financial problems loom large. In 2012, the college will have to start paying back the principal on the $32 million in bonds that it borrowed. Lehmann said that the college is talking to the bond insurer about a potential restructuring. He also noted that Safdie’s building, with its large windows and extensive hallways, was particularly expensive to operate. Meanwhile, because only half of the planned campus was built, the college has had to shoehorn its functions into spaces that weren’t intended to hold them — the library now houses classrooms, offices and a prayer space, and the entire building is crowded.

Despite the troubles, Lehmann is laying out plans for an aggressive expansion of his own. Lehmann thinks that Hebrew College’s Prozdor high school and Me’ah adult education programs could be popular in other cities and is pondering ways to expand their reach, and with them Hebrew College’s revenues. He also believes that Hebrew College can achieve a more balanced budget by aggressively developing online courses. Hebrew College has also been in talks with local universities such as Northeastern University about potential partnerships or affiliations, though Lehmann said that a Baltimore Hebrew University-style merger is not in the works.

A number of people involved with the college argued that if the school could demonstrate that it was financially responsible and had a clear plan for the future, then donations might start flowing more easily.

Lehmann says he is optimistic about the future, and he argues that there is still an important place for Hebrew colleges as places where Jewish scholarship can be devoted to the needs of the Jewish community.

Gordis, the architect of today’s Hebrew College, says he has no regrets about the ambitious and perilous path that he chose for the school.

Asked what he would have done differently, Gordis said, “The only thing is I imagine the board and I should have been more frugal, but I can’t say that the basic trajectory of what I attempted to do was a mistake. Some experiments are noble and useful and maybe bold, and not all of them work out as one anticipated.”