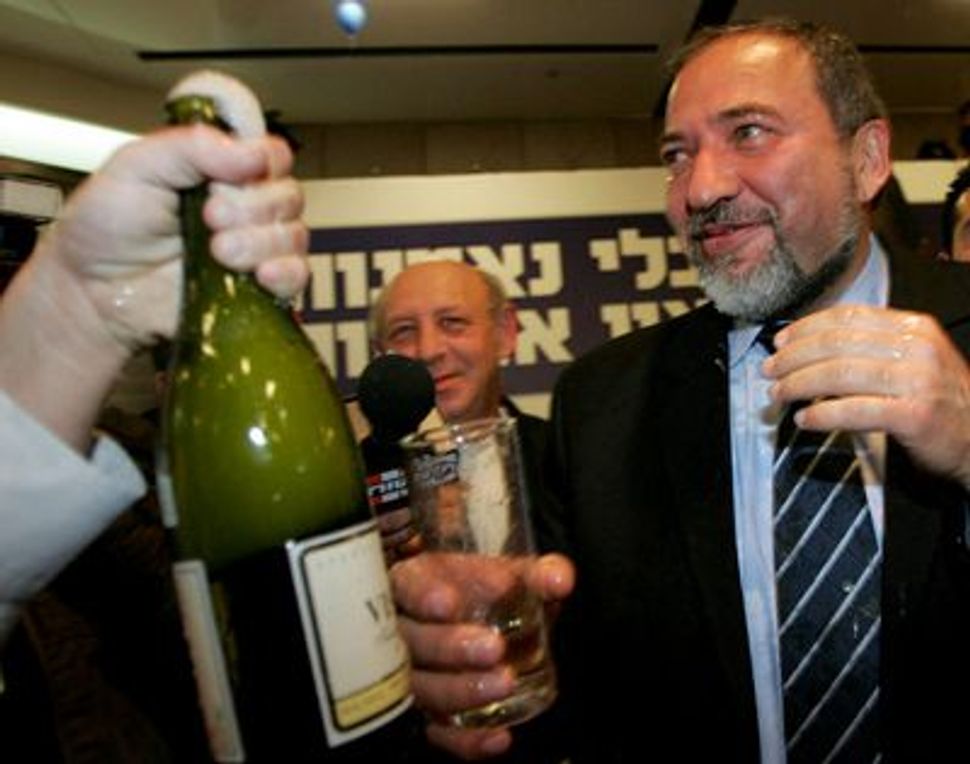 Touchy Topic: The ascension of Avigdor Lieberman and his right-wing Yisrael Beiteinu party has put American Jewish leaders in a quandary. Image by GETTY IMAGES

Several days before Israelis went to the polls, as it became clear that Avigdor Lieberman’s Yisrael Beiteinu party was emerging as the nation’s third largest, Harvard University mathematician Dennis Gaitsgory called his friend Josh Tenenbaum, a professor at the Massachusetts Institute of Technology, and told him he could not sleep at night.

The thought of Lieberman becoming Israel’s kingmaker drove the two Jewish academics to launch a petition calling directly on Likud leader Benjamin Netanyahu and Tzipi Livni, head of Kadima, not to include Lieberman in a governing coalition. This was the first — and, so far, the only — grass-roots attempts in the Jewish community to challenge Lieberman’s legitimacy as a Cabinet member. 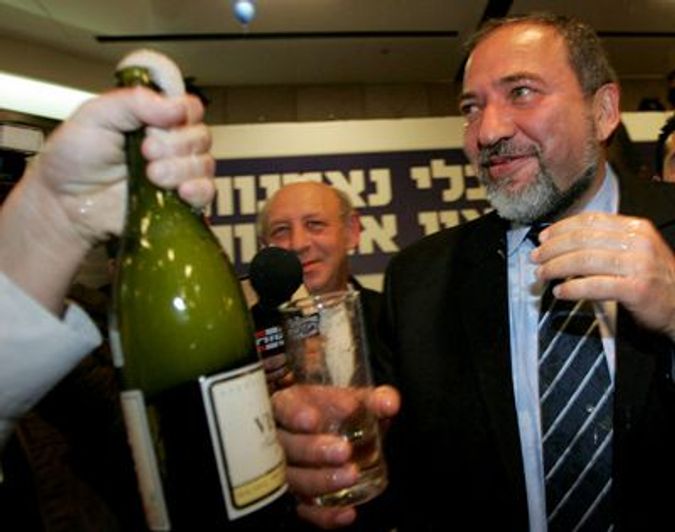 Touchy Topic: The ascension of Avigdor Lieberman and his right-wing Yisrael Beiteinu party has put American Jewish leaders in a quandary. Image by GETTY IMAGES

“We respect the right of Israeli citizens to elect their own political leaders. Yet as supporters of a democratic state, we cannot remain silent at this crucial time,” read the petition, signed by more than 400 people as of February 18. “We remember too well how democracies in the 20th century were brought down by anti-democratic leaders who came to power through popular elections.”

To the petitioners’ surprise, major Jewish organizations were reluctant to take on the issue. “They said it is not part of their mission,” Tenenbaum said in an interview. The two professors learned quickly that they had stumbled on a sensitive issue for the American Jewish community in its relations with the State of Israel: the fear of being perceived as meddling in internal Israeli politics.

In the days following Israel’s February 10 elections, there has been a growing sense of unease within the Jewish community, as organizational leaders have tried to navigate between an apologetic approach to Lieberman and his position and mild expressions of concern over the success of Yisrael Beiteinu, a party urging that all citizens who do not serve in the military take a loyalty oath — a demand that is seen as targeting Arab citizens of Israel.

“This is one of those things that drives home two competing truths — one, that Israelis have the right to choose whoever they want, and the other, that we can say that it is outside the agreed views of American Jews,” said Mark Pelavin, associate director of the Religious Action Center of Reform Judaism. Like many others in the Jewish community, especially those active in civil rights issues, Pelavin expressed dislike of Lieberman’s views but was hesitant to translate this sentiment into immediate action.

As of yet, few voices in the community have come out openly against Lieberman. So far, the most prominent leader to do so is Eric Yoffie, president of the Union for Reform Judaism. In an opinion piece in this issue of the Forward, Yoffie calls the Yisrael Beiteinu campaign “an outrageous, abominable, hate-filled campaign, brimming with incitement that, if left unchecked, could lead Israel to the gates of hell.”

The Tenenbaum-Gaitsgory petition is one grass-roots attempt to present Israeli leaders with a direct call not to include Lieberman’s party in the next government. Another attempt came from the leftist Jewish Voice for Peace. The group criticized the Anti- Defamation League’s national director, Abraham Foxman, who stated that Lieberman’s positions toward Israeli Arabs should be understood as relating to those Arabs who supported Hamas and Hezbollah. “That’s what he’s talking about. He’s not saying expel them. He’s not saying punish them,” Foxman said.

“Instead of defending Lieberman, ADL should be condemning him,” Jewish Voices for Peace argued in a letter to supporters.

Americans for Peace Now also came out against attempts by Jewish groups to “sugar coat” Lieberman’s views. The group warned Jewish leaders not to “legitimize him and what he stands for.”

As for the mainstream Jewish organizations, most are straddling between distancing themselves from Lieberman’s views and stressing the limited effect the party leader’s election will have on the policy of a future Israeli government. Steve Gutow, executive director of the Jewish Council for Public Affairs, said that while he opposes the views that Lieberman represents, he does not believe that Israel will embrace them. “His mere presence in the government does not create an automatic problem, as long as his views are not adopted,” Gutow said.

Alan Solow, the new chairman of the Conference of Presidents of Major American Jewish Organizations, said in a February 15 press conference in Jerusalem that American Jewish leaders should not interfere in Israel’s coalition-forming process.

Lieberman’s growing power in the Israeli political system, and the increasing acceptance of his views by Israeli voters, is also causing some in the Jewish community to question the impact of the latest elections on the relationship between Israel and the American Diaspora. The call for an oath of loyalty is especially disturbing for Jewish activists who remember how the community led the fight against the McCarthy-era requirements for similar oaths in the New York school system, and how Jews were, in many cases, the target of claims that they were disloyal to this country.

“Democracy and human rights are a sacred value for us as Jews. It is deep in our psyche,” Tenenbaum said. Support for Israel is based, he added, on the fundamental notion that Israelis are “like us.”

Jeremy Ben-Ami, executive director of the left-of-center lobbying group J-Street, voiced similar concerns. Although he stated that his group is in “wait and see mode” in regard to Lieberman, Ben-Ami stressed the need to maintain a common ground with Israelis. “Israel is a democracy rooted in the basic principles of how Jews treat the others living with them, and we expect that to remain the case,” he said.

Pelavin agreed: “It raises ultimate issues about the character of the State of Israel. It touches on the need to respond to democratic values and Jewish values.”

Some in the community also fear that having Lieberman serve in a key position in a future Israeli government could put a strain on relations between Washington and Jerusalem. “My friendly advice to the government of Israel would be not to send him over here,” said M.J. Rosenberg, the Israel Policy Forum’s director of policy analysis. Rosenberg, who argued in a recent Los Angeles Times article that Lieberman is “Israel’s Jorg Haider or Jean-Marie Le Pen,” added that the presidential election of Barack Obama makes the matter even more explosive. “Obama has sensitivities no other president before him had,” Rosenberg said. “He is the last person on earth to show sympathy to a demand for loyalty oaths.”

Administration officials have so far avoided commenting on Lieberman’s electoral success and on his prospects of becoming a senior member in Israel’s next government. In a February 12 speech, Deputy Secretary of State James Steinberg dismissed the issue as “hypothetical.”

But former State Department official Jon Alterman believes that the impact of the Lieberman phenomena will be seen in the long run. “There is a fundamental assumption that Israelis are basically like Americans in their belief in democracy and in the rule of law,” said Alterman, who heads the Middle East program at the Center for Strategic and International Studies. “When this assumption is undermined, it can hurt the sense of communality that binds the two nations.”