A New Debate on Where Antisemitism Comes From 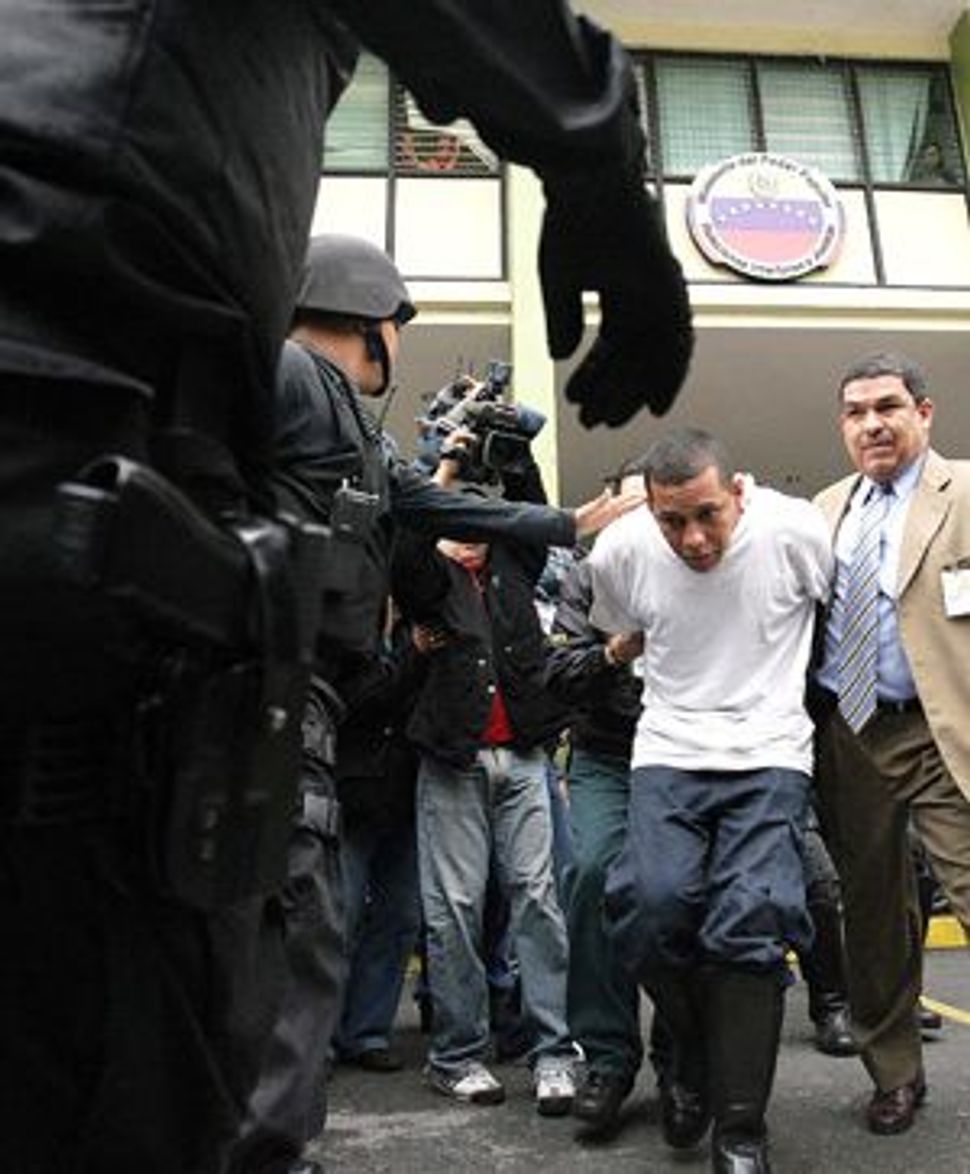 Attacks Rise: Police take away a suspect in the desecration of a Venezuelan synagogue, one of many incidents that has raised concern about the increase in antisemitism around the globe. Image by GETTY IMAGES

Responding to mounting signs of a resurgence of aggressive antisemitism in Europe and elsewhere, the British government recently hosted an unusual gathering to discuss ways of fighting the threat. Known as the London Conference on Combating Antisemitism, the mid-February gathering brought together 125 members of parliaments from 40 nations for two days of emotional calls to action, along with scholarly analyses of what speakers called “the new antisemitism.”

The conference, staged in Britain’s magisterial Houses of Parliament, succeeded in bringing some needed attention to a genuine crisis. The lawmakers, most of them non-Jews, left London with 35 action proposals in hand, which they vowed to bring back to their respective governments. What most of them apparently didn’t know was that they had walked into the middle of an ongoing debate among Jews over how to define antisemitism and how to explain its causes. 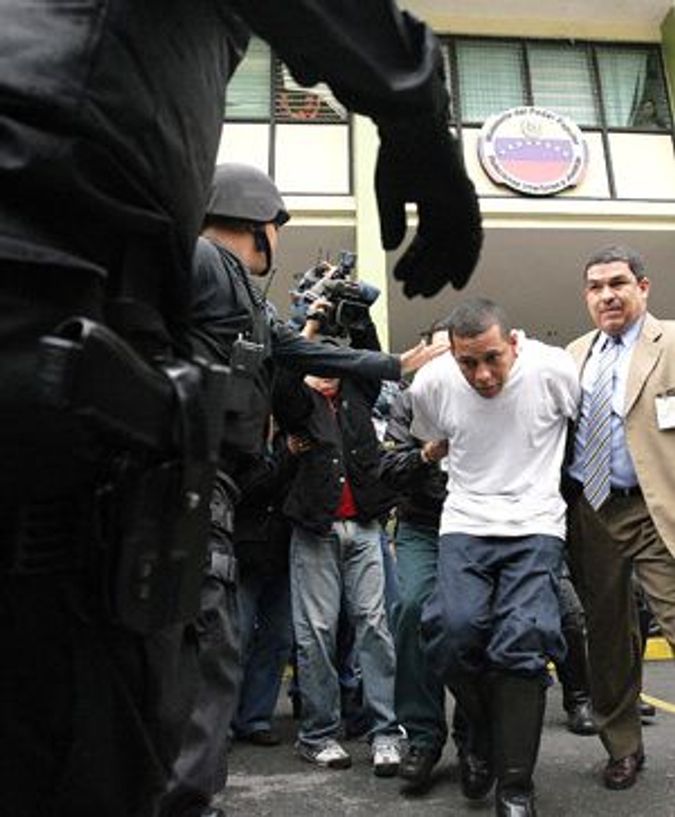 Attacks Rise: Police take away a suspect in the desecration of a Venezuelan synagogue, one of many incidents that has raised concern about the increase in antisemitism around the globe. Image by GETTY IMAGES

That there is a crisis appears indisputable. Antisemitic attacks and threats have been rising in numbers and severity around the globe at an alarming rate for nearly a decade, roughly since the outbreak of the Al Aqsa Intifada in 2000. In just one year, from 2003 to 2004, attacks in Britain jumped by 42%, according to Britain’s Institute for Jewish Policy Research. Moreover, as the visiting lawmakers were told, antisemitism has entered ordinary discourse throughout the West and has reappeared in state-sanctioned form in places like Iran and Venezuela.

Just before the conference convened, however, antisemitism took a sudden, quantum leap. The month of January saw a virtual explosion worldwide, coinciding with the start of Israel’s three-week war in Gaza.

There were more reported attacks and threats in Britain during the first three weeks of January than in the first six months of 2008. Totals for the rest of Europe are not known, but a catalogue of select incidents in January in 18 countries, compiled by the Anti-Defamation League, shows the severity. Included were nine openly antisemitic assaults on individuals, most of them with guns, knives or bats, and at least 17 fire-bombings or arson attacks on synagogues or kosher stores, plus dozens more cases of synagogue and cemetery vandalism, Nazi-style graffiti, slurs and death threats. “Ess brent — it’s burning,” said the ADL’s national director, Abraham Foxman, echoing a World War II-era Yiddish partisan hymn.

“It’s a pandemic — not an epidemic that breaks out somewhere, but a pandemic that’s everywhere,” Foxman told the Forward shortly after returning from London. “We haven’t seen anything like this since 1945.”

How to respond is as vexing as the problem itself, and the debate over the place of Israel in the crisis is never far from the surface. The prevailing approach was summed up in a pre-conference paper distributed to attendees at the London gathering, written by Canadian lawmaker and former justice minister Irwin Cotler.

“Classical” antisemitism, Cotler wrote, means discrimination or attacks against Jews as members of various societies in which they live. “The new antisemitism,” he explained, “involves the discrimination against the right of the Jewish people to live as an equal member of the family of nations — the denial of, and assault upon, the Jewish people’s right even to live — with Israel as the ‘collective Jew among the nations.’”

The alternative view, that Muslim anger directed at Jews is at least partly a product of the Middle East conflict, was not part of the official conference program. Nonetheless, it greeted conferees on February 16, the day after the conference opened, on the pages of the left-wing British daily The Guardian, in the form of an open letter addressed to the conference’s senior British host, Lord Mark Malloch-Brown, minister of state for the foreign office. The letter was written by one of Europe’s most respected researchers of antisemitism, Antony Lerman, who was until very recently the head of the Institute for Jewish Policy Research.

The “obvious policy conclusion,” Lerman wrote, is to “make international efforts to achieve a just Israel-Palestine peace the top priority. This is probably the most constructive policy recommendation the parliamentarians could make.” It was one of several articles Lerman published in recent months on similar themes. Lerman was not invited to the conference, according to a source close to the organizers.

The idea of linking global antisemitism to the vagaries of Israeli-Palestinian relations has been all but taboo in Jewish community discourse for years. It is commonly described at best as a covert way of pressuring Israel, and at worst as a form of blaming the victim. But the notion that Israeli actions have the potential to spark antisemitic attacks, and should perhaps be modulated accordingly, is appearing with increasing frequency in some surprising quarters.

The Jewish People Policy Planning Institute, a Jerusalem think tank created in 2002 by the Jewish Agency for Israel, issues an annual survey of the state of the Jewish community worldwide, which is submitted to Israel’s prime minister each year at a formal meeting. The first report, in 2004, called repeatedly for an institutionalized strategic dialogue between the Israeli government and Diaspora Jewish communities, in order to give Diaspora Jews a chance for input on Israeli decisions that may affect them. Every annual report has repeated the recommendation, including the latest report issued February 22.

The recommendation is explicitly intended to let Israel adjust its defense measures in case of possible backlash against Diaspora Jews. This was spelled out in the institute’s second report, in 2005, which cited the deadly bombing of the AMIA Jewish communal center in Buenos Aires in 1994. According to Israeli intelligence estimates, the bombing was a direct retaliation for Israel’s assassination in 1992 of the head of Hezbollah, Sheikh Abbas Mussawi.

“It seems that the question of whether the Israeli action might trigger an attack on Jewish people targets was not considered,” the report said. “There exists no formal mechanism in the Israeli government to systematically take into account considerations pertaining to the Jewish people.”

The creation of the institute, and the recommendation of strategic dialogue, came directly from the then-chairman of the Jewish Agency, Sallai Meridor, currently Israel’s ambassador in Washington.

“I was in the situation room of the Defense Ministry in 1991, when the decision was taken to go after Mussawi,” Meridor told the Forward in a 2005 interview. “I promise you that nobody in the room considered for a moment that it might end in an attack on Jews in Argentina.”

“You have to be smart as well as strong,” said Rep. Gary Ackerman, the New York Democrat who chairs the House Subcommittee on the Middle East and South Asia.

A New Debate on Where Antisemitism Comes From