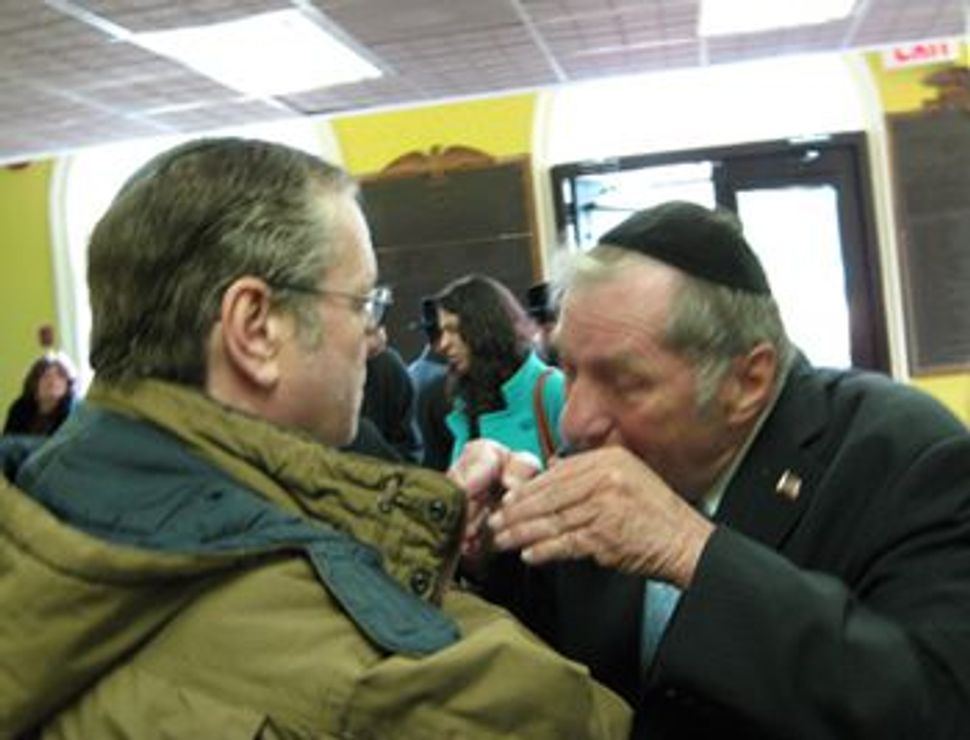 Pushing Back: David Framowitz and Ronald Greenwald debate tactics at a March 1 rally against sexual abuse in the Orthodox world. Image by MICHAEl ORBACH

It was at the very end of his solidarity rally for Orthodox victims of sexual abuse that the tensions beneath the surface of Assembly member Dov Hikind’s approach to the problem boiled up.

“When are you going to come out with the names of the murderers and molesters?” David Framowitz, an alleged victim of molestation by his yeshiva teacher, yelled at Hikind. 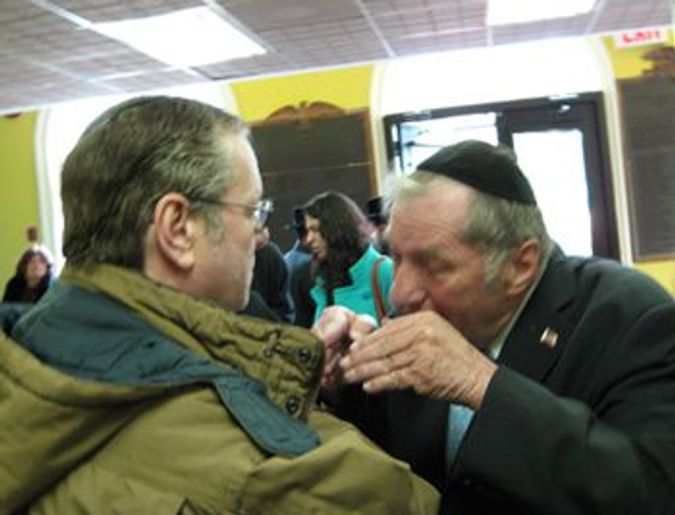 Pushing Back: David Framowitz and Ronald Greenwald debate tactics at a March 1 rally against sexual abuse in the Orthodox world. Image by MICHAEl ORBACH

Since last spring, Hikind, the Brooklyn Democrat who represents the heavily Orthodox neighborhoods of Boro Park and Flatbush, has been highlighting the problem of rabbis who molest children in local yeshivas. It is an “epidemic,” he said, that his community must face.

But Hikind has accommodated himself to his community’s resistance to taking such cases to secular law enforcement authorities, and is instead fighting for rabbinic leaders to take steps to address the problem from within.

Framowitz, a thin man with graying hair, a wife and four children, who now lives in the West Bank and flew in for this event, was calling on Hikind to turn over to the authorities information on rabbinic molesters the lawmaker has gathered.

The assemblyman, who claims he has compiled dossiers on more than 1,000 cases of abuse, has refused, saying that this would imperil the anonymity he promised those who poured out their stories to him. He has fought a subpoena for the information served by lawyers in a civil suit against Yehuda Kolko, a teacher suspected of widespread abuse.

Calls to curb such abuse from within the ultra-Orthodox community are coming “40 years too late,” Framowitz told the Forward. And those confiding their cases to Hikind would do better to turn elsewhere, he said: “It’s called the sex division crime unit of the police.”

Still, even Framowitz admitted, after his encounter with Hikind, that the publicity the lawmaker has given the issue is helping to move things “in the right direction.”

Tailored in part for the media, Hikind’s March 1 rally, held in Brooklyn’s Boro Park Y, was emotional political theatre. The event drew some 250 people, demonstrating, at least, that Hikind has succeeded in promoting the awareness he sought.

At the same time, it showed in various ways just how far things have yet to go, even among this crowd, before the problem can be discussed candidly. Only one speaker, psychologist Asher Lipner, used the term “sexual abuse.” Others addressing the event referred euphemistically to “the problem,” “this evil” or “the abomination.”

One sexual abuse survivor, who said he was molested by his high school rabbi, said that “just seeing the audience” was enough.

“The message has to get out,” he explained to the Forward. “I think it will.” But he requested not to be named, for fear of stigmatization.

“The *shiddach *is the most important thing,” Rabbi Gershon Tannenbaum explained to a victim of sexual abuse after addressing the crowd, meaning that disclosure of a victim’s abuse would ruin his prospects of marriage.

Still, Hikind insisted the number of people in attendance sent a message.

“It’s a sign that things are changing,” he told the Forward. Ten years ago, a gathering of similar size would have been unthinkable, he said.

Asked about a vow he had made in August 2008 to get rid of Avroham Reichman, a teacher at the United Talmudic Academy who is currently being sued in civil court for sexual abuse, Hikind spoke out against the Satmar Hasidic community, which sponsors the school.

“Satmar is ready to go through any type of loss but won’t get rid of Reichman. They’ve pretty much told me to go to hell,” Hikind said.

But Hikind also said that going to war with Satmar would ruin what he was attempting to achieve. “I know how to fight,” he insisted. “But I’m interested in accomplishing something.”

After Hikind left the room, Rabbi Ronald Greenwald, a longtime Jewish activist, defended him to Framowitz, stating that he was working within the parameters of the ultra-Orthodox population.

“The man is trying to do something, and you’re attacking him,” Greenwald said. “You’re angry as hell.”

“Not angry,” Framowitz, who is himself Orthodox, said quietly. “Hurt.”