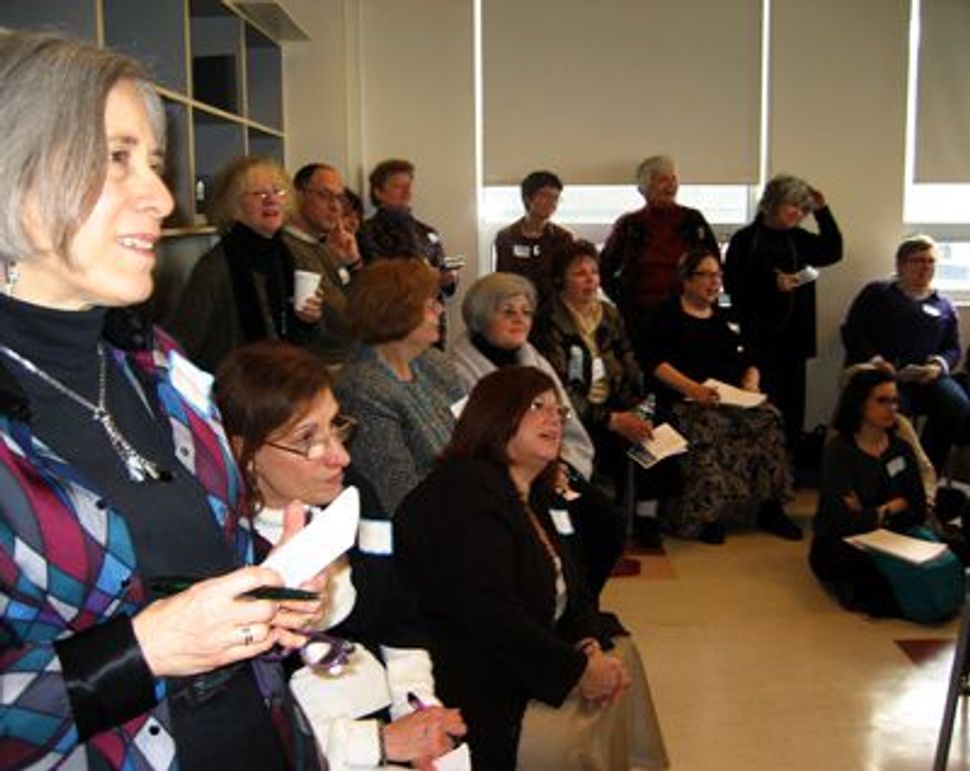 At the first national conference on Jewish women and prayer, the numerous attendants told a story as important as the sessions themselves.

Some 350 participants crowded into breakout sessions, filling every seat at the March 1 event. They stood along the walls and sat on the floors at Manhattan’s Abraham Joshua Heschel High School, where the conference took place. Two women had come from England specifically for the gathering. And the sponsors — Conservative, Orthodox and Reform organizations, among others — had to turn away more than 100 women who sent in paid registrations. 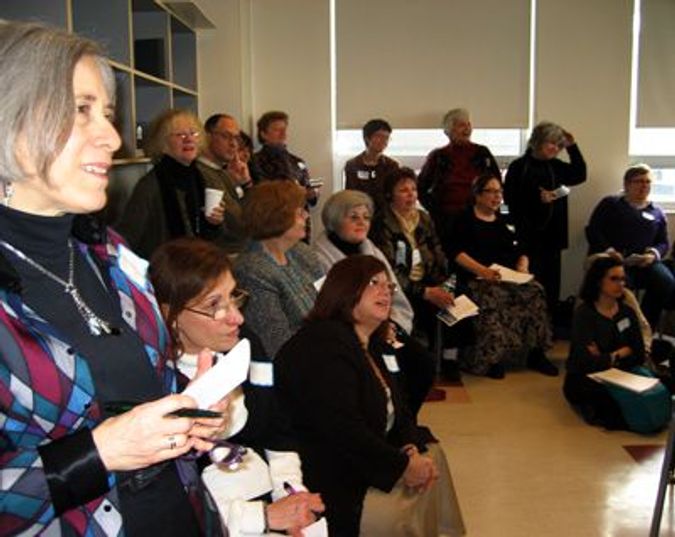 “People are feeling very vulnerable right now, for all the obvious reasons,” said Joy Levitt, a Reconstructionist rabbi and executive director of the Jewish Community Center in Manhattan, which co-sponsored the event. “The timing of this conference was very, very significant…. The ability to express anxiety as well as gratitude for what we have is very powerful, and prayer is a piece of that.”

The idea for the conference was sparked by the popularity of Aliza Lavie’s “A Jewish Woman’s Prayer Book,” published in Hebrew in Israel in 2005 and issued in a Hebrew-English version in the United States in December 2008. It is a best-seller in Israel, where it has sold more than 100,000 copies and become a cultural-religious phenomenon.

The stylish Lavie, lecturer at Bar-Ilan University’s political studies department and host of a weekly Israeli talk show, has been invited to speak across the religious spectrum, from Jerusalem’s most fervently Orthodox precinct, Mea Shearim (where her hosts asked her to wear a wig, which she promptly went out and purchased), to a fervently secular kibbutz (where she gave a talk to prepare members for their first Yom Kippur worship).

“This was a living, breathing feminine Jewish sphere,” Lavie said in the keynote address. “It was pushed aside for regulated prayer, prayer which lost its luster,” for women whose needs have not been met by the traditional fixed prayer book liturgy — despite Artscroll’s 2005 publication of an Orthodox prayer book for women.

Lavie’s book is a compendium of prayers by and for Jewish women that covers moments throughout the life cycle and the Jewish year. It resuscitates from history the voices of such Jews as Fanny Neuda, a 19th-century Moravian woman whose German-language book of prayers was a best-seller in her time. Other prayers are by women whose names have been lost, along with many written by men for women. Perhaps this is the reason that the book is credible among Israel’s Orthodox Jews.

When many of these prayers were composed, most Jewish women were illiterate in Hebrew but had rich Jewish prayer lives in Yiddish or Ladino, Lavie said.

Throughout the day, participants eagerly shared stories of personal prayer. Ellen Goodman, 55, came from her home in Ottawa, for a way to connect to her ancestors’ rich prayer lives. “My grandmothers always prayed at home,” she said. “There was always something less congregational and more personal about it. I’m pretty secular, but prayer is in my life. For me, coming to the conference is about continuity with my ancestors and a legacy for my children.”

Much of the discussion focused on personal experience more than on broader intellectual issues. Some speakers referenced — but did not dive deeply into — the tension between the codified liturgy and spontaneous personal prayer. A session on the politics of women’s prayer in Modern Orthodox circles attracted overflow crowds and produced a lively discussion, but remained a footnote at the conference.

Some voiced concern that focusing on women’s personal prayer — rather than on making communal prayer more inclusive — could ultimately result in marginalization. Janice Elster, a Reform rabbi who works at the University of Pennsylvania Hillel said, “I don’t want to have to be relegated to a place of my own creating that is not in the synagogue and not in the siddur.”

Conference organizer Anne Lapidus Lerner, director of the Jewish Women’s Studies Program at the Jewish Theological Seminary, stressed that her objective was to stoke discussion rather than to come up with solutions. “We have a need to talk about prayer in our lives,” she said. “The purpose of the conference was to open up the whole subject.”