Cantor and Specter: Alone, and Powerful 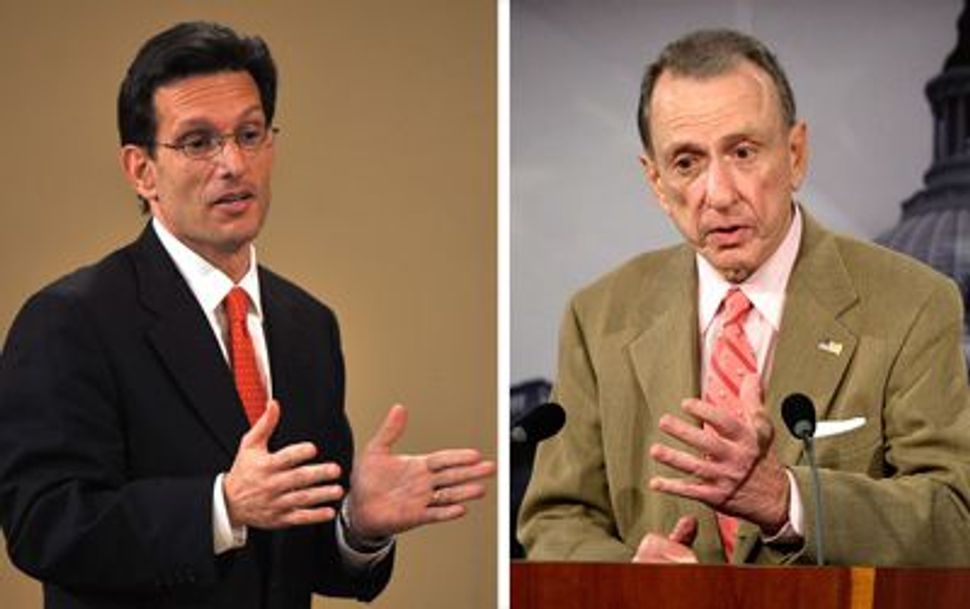 A Tale of Two Republicans: The only GOP Jews now in Congress, Rep. Eric Cantor of Virginia (left) and Sen. Arlen Specter of Pennsylvania (right) hold different political views, but, for different reasons, both wield great clout in Washington. Image by GETTY IMAGEs

Eric Cantor, a Republican congressman from Virginia, wasn’t anybody’s idea of a household name a few weeks ago, but you’ll be hearing a lot more about him in the weeks ahead because he’s emerging as one of President Obama’s biggest headaches. As GOP whip, the No. 2 Republican in the House of Representatives, it is Cantor’s job to get his colleagues to vote together. On February 13, thanks to his work, not a single House Republican supported Obama’s $747 billion stimulus package. The bill passed anyway, but the sharp party-line split embarrassed the president, who had campaigned on a promise to change Washington’s partisan tone. 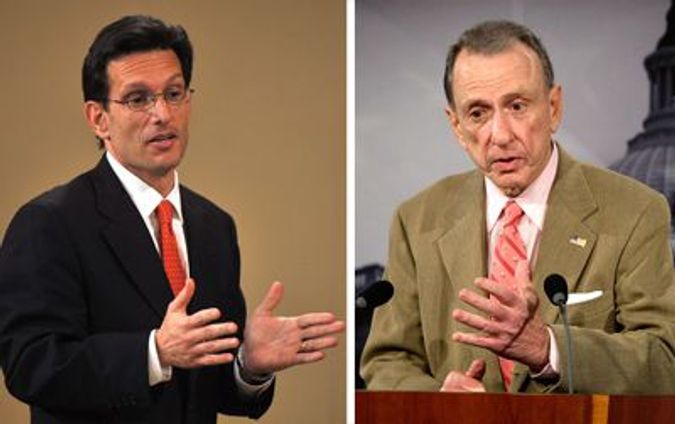 A Tale of Two Republicans: The only GOP Jews now in Congress, Rep. Eric Cantor of Virginia (left) and Sen. Arlen Specter of Pennsylvania (right) hold different political views, but, for different reasons, both wield great clout in Washington. Image by GETTY IMAGEs

Obama was still smarting 11 days later, when he spoke at a White House fiscal summit. One attendee urged him to reach across the aisle and work more closely with Republicans. “Well, I will certainly do that,” the president deadpanned, “because I’m just a glutton for punishment. I’m going to keep on talking to Eric Cantor. Someday, sooner or later, he’s going to say, ‘Boy, Obama had a good idea.’ It’s going to happen. You watch.”

The president’s situation is different across the Capitol in the Senate. Democrats have a majority there, too, but they don’t have the 60 votes needed to stop a filibuster and bring a bill to a vote. To win approval for any major program, they need at least a handful of Republican votes. As things stand, the key to Obama’s hopes of success is a crusty, old- school Republican moderate, Senator Arlen Specter of Pennsylvania, who defied his party and helped round up the three GOP votes needed to pass the stimulus bill.

In a real sense, then, Obama’s success in Congress is bound up with the fortunes of those two Republicans, Cantor and Specter. By coincidence, both happen to be Jewish. In fact, they are the only Jewish Republicans on Capitol Hill — indeed, the only Jews holding any elected federal office as Republicans

There’s a third figure in Obama’s congressional puzzle, and oddly enough, he’s also Jewish: outgoing Republican Senator Norm Coleman, who is locked in a legal struggle to keep his seat following an election that left him a razor-thin 225 votes behind. Coleman, 59, Brooklyn-born and largely secular, was elected mayor of St. Paul as a Democrat, but switched parties in the mid-1990s. He is pro-life and conservative on social issues but centrist on others. He speaks frequently to Jewish audiences, touting GOP views on terror and the United Nations. He is a Jewish Republican that Obama is watching very closely indeed: If Coleman ends up losing to Jewish Democrat Al Franken, Senate Democrats will have 59 votes, only one vote shy of the magic 60-vote cutoff.

It is an unusual moment for Jewish Republicans. Despite their high profile in the media, in think tanks and as GOP appointees, they have very little presence in elected office — the spot, political scientists say, where real power is wielded. Of 44 Jews in the current Congress — 13 in the Senate and 31 in the House — only two are Republicans. Things aren’t much different at the state and local levels.

Their continuing failure to break through often leaves Jewish Republican activists flustered and defensive. “If 50% of Jews were Republicans, then you would have a significantly higher number of Jews who are Republican office-holders,” said William Daroff, Washington representative of United Jewish Communities and former deputy executive director of the Republican Jewish Coalition. In fact, though, “Republicans have been unable to convince Jews either of the virtues of a conservative social policy or that Democrats are soft on Israel.”

Now, however, the sudden emergence of Cantor and Specter as power brokers could produce a psychological shift and energize party activists. “One of the goals we have is working with Eric Cantor to encourage the back bench of young Jewish Republicans around the country to start running for office,” said Matthew Brooks, executive director of the Republican Jewish Coalition.

Until very recently, said Matt Dorf, a Democratic-leaning political consultant, “the Jewish Republicans didn’t control anything. Now, all of a sudden, their guys are at the center of the universe.”

If a change is coming, the personalities of the Jewish Republicans now in the spotlight suggest where things are headed.

Specter, 79, is a lifelong maverick and loner. He’s one of the last of the party’s so-called Eastern liberals, well outside today’s conservative mainstream and proud of it. Cantor, 46, is an affable, fast-rising party leader and an important voice for conservative ideology. Specter may be the Republican lawmaker with the least regard for party discipline. Cantor is one of the party’s most important disciplinarians.

Specter was raised in small-town Kansas, where his immigrant father owned a junkyard. In the 1960s he served as a top staffer on the Warren Commission. Settling afterward in Philadelphia, he switched to Republican from Democrat and was elected district attorney in 1965.

Elected to the Senate in 1980, he is a strong defender of abortion rights and church-state separation. He has been independent on Jewish issues, too, and conducted his own personal diplomacy with Iraq’s Saddam Hussein in the 1980s and later with the Assads in Syria, impervious to protests from Jewish activists and the Bush White House. “He makes no bones about the fact that he is a progressive Republican, in the mold of a Jacob Javits or a Nelson Rockefeller, who were once the backbone of Northeastern Republicanism,” Daroff said.

Cantor is in many ways Specter’s polar opposite. Born in 1963 in Richmond, he practiced law in his family’s real-estate firm before winning a seat in the state legislature in 1991. Joining Congress in 2000, he almost immediately entered the Republican leadership and sits comfortably in his party’s deeply conservative mainstream.

“Cantor commands tremendous respect from his colleagues,” Dorf said. “He’s very much involved in strategy. And he’s very much an ideologue.”

At the same time, Cantor stands out among his fellow Republicans for his highly visible Jewish identity. He is active in his family’s Conservative synagogue, keeps a kosher home and is prominently involved in Richmond’s Jewish federation.

An outspoken defender of Israel, Cantor is becoming an important GOP voice on foreign policy. It doesn’t hurt, either, that his observant Judaism gives him a seat in Republican discussions of religion.

On the other hand, he’s also careful not to overstep the bounds and paint himself into a parochial corner, said Douglas Bloomfield, a journalist and former legislative director of the pro-Israel lobbying organization the American Israel Public Affairs Committee. “He can’t afford to be seen as Super-Jew, as the Jewish Congressman,” Bloomfield said. “He’s running for speaker.”

For all the enthusiasm he inspires among party regulars and Jewish Republican activists, however, it’s not clear that Cantor can be the long-sought bridge connecting the GOP and the Jewish community. Three generations after Franklin Delano Roosevelt won their hearts, American Jews continue to vote Democratic in overwhelming numbers. Polls taken after the last presidential election showed that between 75% and 78% of Jewish voters supported Obama. And, barring some earthquake, the further Cantor helps to lead his party to the right, the further he will push it away from his fellow Jews.

“Specter represents the Republican that Jews might vote for,” Bloomfield said. “Cantor is why the Jews don’t vote for them.”

Cantor and Specter: Alone, and Powerful