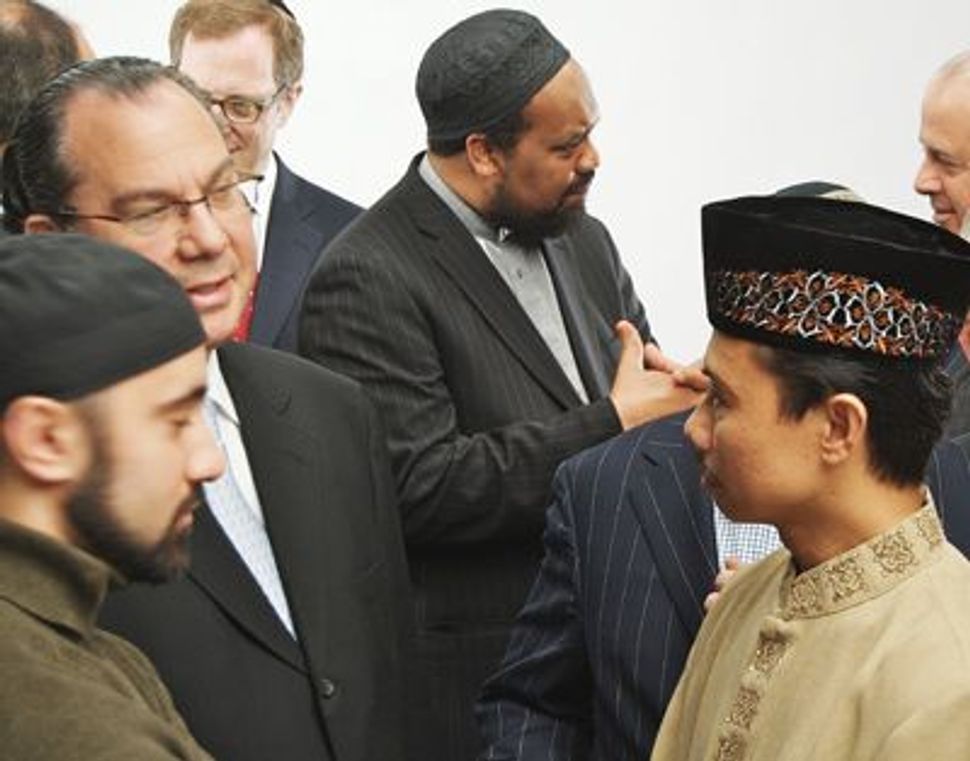 The Jewish community’s main umbrella organization for domestic policy has struck a significant blow against internal resistance to dialogue with Muslims.

The Jewish Council for Public Affairs adopted a resolution March 2, calling for local and national Jewish groups to build coalitions with Muslim Americans and to oppose anti-Muslim bias. 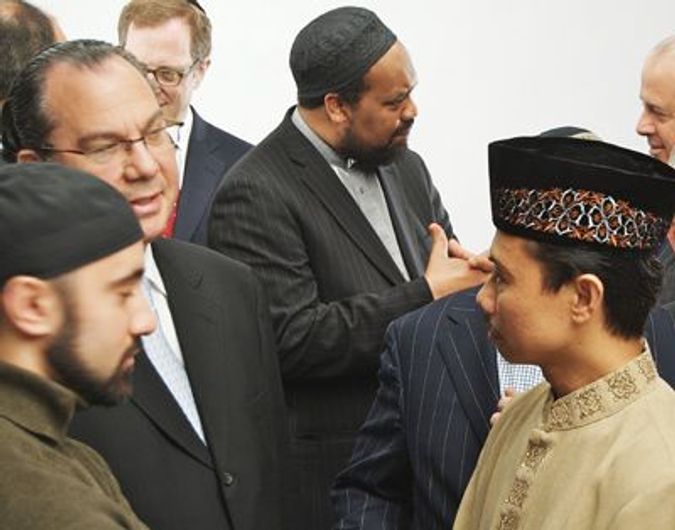 “Jewish and Muslim Americans…should work in coalition to advance our common commitment to civil liberties, the struggle against all forms of terrorism, racism, anti-Semitism (and) anti-Muslim prejudice,” the resolution declared. It also strongly denounces anti-Muslim bias and harassment.

The resolution comes 18 months after Rabbi Eric Yoffie, president of the Union for Reform Judaism — America’s largest Jewish religious denomination — broke new ground by addressing a major Islamic organization, despite strong criticism from some quarters of the Jewish community.

“There has been a long desire to do it,” said Rabbi Steve Gutow, executive director of the JCPA, in an interview at the group’s annual conference in Washington, where the resolution was passed. “This feeling is stronger among Jews. We want to reach out.” He added that interest in engaging with the Muslim community has only grown with the intensified conflict in the Middle East.

Previous attempts at engaging with the Muslim community have left some Jewish activists bruised and scarred by skepticism and harsh criticism from their fellow Jews.

One such activist is Rabbi Michael Paley of New York, who warned a room filled with community leaders, “It’s a dangerous conversation.” The danger, Paley said, is not from what is being said inside the room, but rather from how it will be perceived by other Jews.

“If you’ve gone on a panel with someone who 10 to 15 years ago took a picture with someone who is objectionable to some in the Jewish community, you’re in trouble,” Paley said, speaking from experience.

In August 2007, after already being deeply involved in dialogue with the Muslim community, Paley spoke out in defense of the principal of a planned Arabic-language middle school in Brooklyn who had come under fire mostly from Jewish scholars. The critics accused her, wrongly, of being a “9/11 denier”— someone who rejected Muslim or Arab responsibility for the World Trade Center attack. 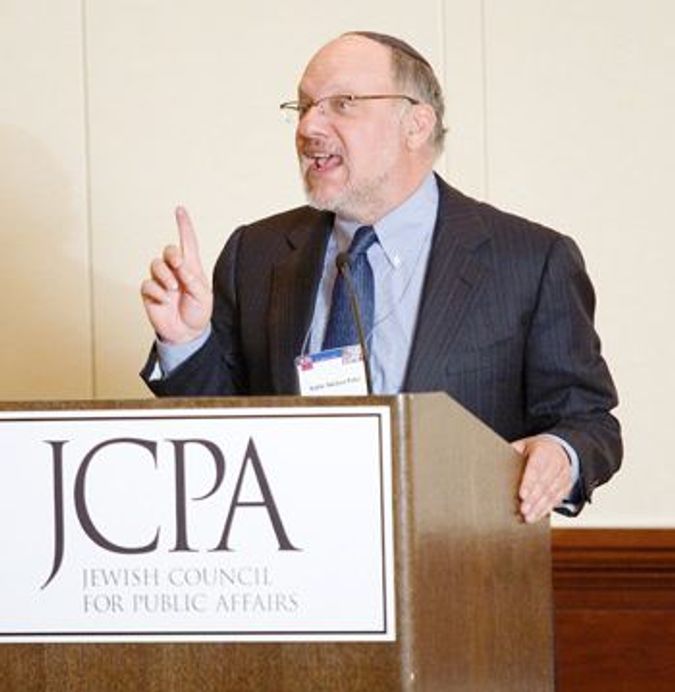 Following his public comments on the principal’s behalf, Paley, a scholar-in-residence and director of UJA-Federation of New York’s Jewish resource center, was ordered not to speak on the issue anymore. He told communal activists attending the plenum that pursuing Jewish-Muslim ties requires some courage.

Rabbi Jack Moline of Agudas Achim Congregation in Arlington, Va., also encountered criticism when trying to promote dialogue between Jews and Muslims. He said that each attempt to raise the issue brought about challenges from congregants “who believe Islam is essentially anti-Jewish.”

The issue boils down to the question of what makes a legitimate partner on the Muslim side.

In 2006, a public dialogue between prominent New York Orthodox rabbi Marc Schneier and Muslim spiritual leader Omar Abu Namous provoked outrage rather than amity from audience members at Schneier’s synagogue. When pressed about why more Muslims don’t speak out against Islamic extremism, the otherwise genial Palestinian Muslim — imam of New York’s largest mosque — unleashed a barrage of criticisms against Israel, even questioning its legitimacy.

“It demonstrated how far apart we are and opened my eyes to the reality that we have a long way to go,” Schneier said after the event.

The URJ, on the other hand, has been engaged for more than a year in an extensive dialogue with the Islamic Society of North America, the largest Muslim organization in the United States.

Steven Emerson, founder and executive director of the Investigative Project On Terrorism, which has focused on exposing Muslim extremists in America, said that although ISNA is more moderate than other Muslim groups, it was still the wrong choice.

“The only thing that came out of it was legitimizing groups and individuals that did not change their views,” Emerson said.

ISNA, he argued, has continued to issue radical statements and to host antisemites.

But Rabbi Schneier noted that at the behest of Jewish groups, ISNA president Sayeed Syeed intervened with the King of Saudi Arabia last year to convince him to disinvite the Jewish anti-Zionist group Neturei Karta from a high-profile international gathering of religious leaders the monarch was sponsoring.

“This was unprecedented,” he said in an interview last October. “This is the kind of relationship we have been working for.”

Some JCPA participants raised questions regarding ties with another group — the Council on American-Islamic Relations, a Muslim civil rights organization. The federal government cited CAIR, among many others, as an “unindicted co-conspirator” in its criminal case against the Holy Land Foundation, which was convicted last November of funneling large sums to Hamas, a U.S.-designated terrorist organization.

Civil liberties groups pointed out that “unindicted co-conspirators” have no chance to defend themselves against the charge in court.

Nevertheless, Schneier noted last October that for most Jewish leaders, including himself, CAIR remains “beyond the pale” because of some of its officials’ alleged ties to, or refusal to, denounce Hamas, which has taken responsibility for numerous terror attacks targeting Israeli civilians.

Referring to CAIR’s executive director, Paley said, “I cannot talk to Nihad Awad: It would jeopardize my job at UJA.” He added, however, that he had some “good accidental talks” with Awad when he ran into him on various occasions.

Imam Mohamed Magid, who addressed the JCPA gathering, said that at times, the Muslim community, too, questions his push for dialogue with the Jewish community. “I’m going to stay the course,” said Magid, who heads the All Dulles Area Muslim Society in Virginia and is known in the Muslim world as a strong critic of antisemitism. “You have to be true to your principles.”

Jewish activists currently involved in dialogue with Muslim groups agree that talks should focus on issues with potential for common ground — not on the Israeli-Arab conflict, which is viewed as a non-starter for interfaith discussion. Among the issues suggested for coalition building were human rights, health care, immigration and poverty.

To that idea, Emerson replied, “You can talk about health care with David Duke.”

A recent Gallup Poll of Muslim Americans, the largest ever conducted, suggested another possible common ground for Muslim and Jews — political affiliation. Both groups have similar voting patterns: Half of the Muslims identify as Democrats, a third as Independents and only a small minority as Republicans. The survey also found American Muslim women to be more highly educated than women in every religious group except Jews.

The JCPA plenum supported the pro-dialogue resolution by a large majority.

The Reform movement’s Mark Pelavin, who presented the resolution, stressed that many local Jewish communities across the country are “looking for guidance” on how to go about reaching out to Muslims.

But the American Jewish Congress’s acting co-executive director, Marc Stern, voted against the resolution and argued that guidance is exactly what it lacks. “It talks only about the easy issues,” he said, noting that the resolution does not address the problems of choosing Muslim interlocutors and setting the agenda for a dialogue.