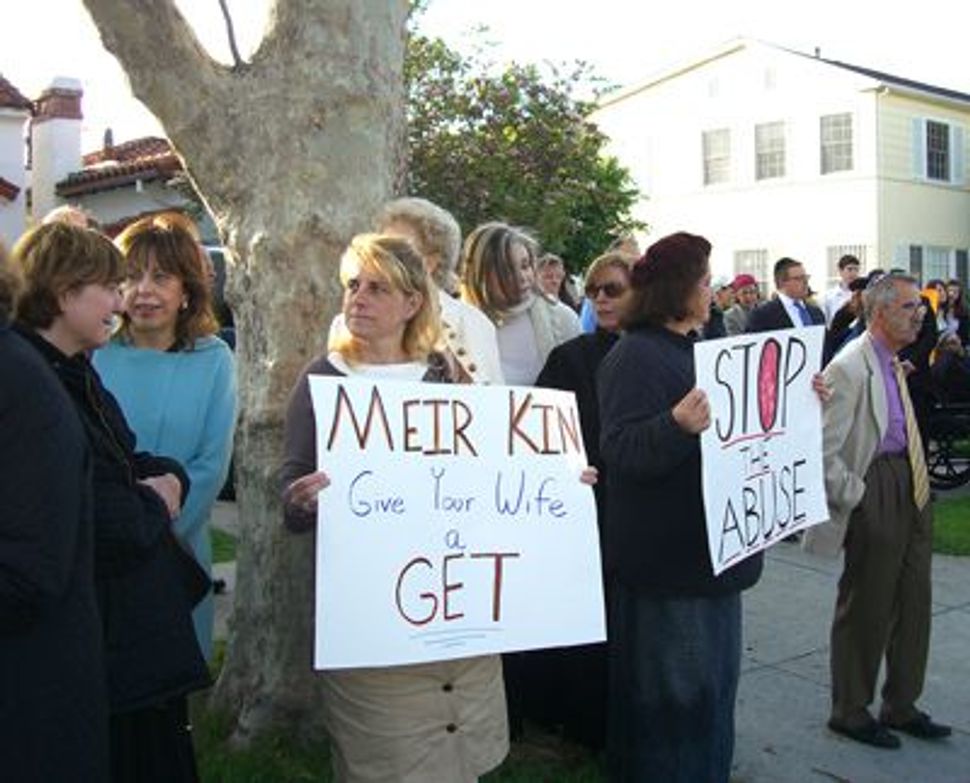 Protest: Members of L.A.?s Orthodox community at a rally March 9 for a woman they claim was not granted a Jewish divorce. Image by REBECCA SPENCE

On the day known as Ta’anit Esther — when observant Jews fast before Purim — more than 150 members of Los Angeles’s close-knit Orthodox community gathered for a protest rally outside the family home of a man they claim has refused to grant his wife a Jewish divorce, known as a get. They chanted and prayed, and held signs that read “Stop the Abuse” and “Give Your Wife a Get.”

The hour-long demonstration, the first of its kind in L.A. since 1979, was staged in an effort to publicly humiliate Meir Kin, a member of Monsey, N.Y.’s Orthodox community who now lives here. While Kin’s defenders contend that he has granted a get, advocates for his ex-wife, Lonna, say that it was not issued by a valid beit din, or rabbinic court, leaving her among the ranks of the agunot, or “chained women.” 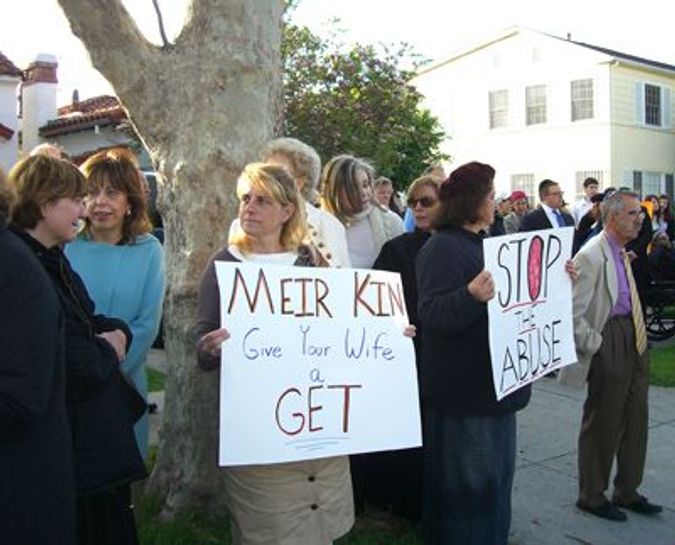 Protest: Members of L.A.?s Orthodox community at a rally March 9 for a woman they claim was not granted a Jewish divorce. Image by REBECCA SPENCE

“It’s a horrible situation to leave a woman in,” said one protester, Jill Reichman. “We can’t let these men get away with it.”

The plight of the agunot has long been a thorny subject within the Orthodox community, where adherence to religious law mandates that a woman without a get cannot remarry. Moreover, if she were to remarry, any children of that union would be considered illegitimate. There are varying reasons for a husband to refuse to grant a Jewish divorce, ranging from financial — wherein a husband will demand money in order to grant the *get *— to sheer malice.

At issue is how to most effectively approach the problem, which has riled Orthodox communities from Long Island to Jerusalem.

Longtime agunot advocates such as the Jewish Orthodox Feminist Alliance argue for the need for systemic change within the Orthodox world. Such change, they hope, would remedy the root cause of the problem. But a newer activist group called the Organization for the Resolution of Agunot, a New-York based not-for-profit group that planned the L.A. rally, has decided instead to stage public protests on a case-by-case basis. The dozens of rallies staged so far, however, have seen mixed results.

Belda Lindenbaum, a 70-year-old JOFA activist, said that while she backs ORA’s efforts as a means of drawing attention to the broader issue, it’s not enough.

“I support rallies, but there needs to be systemic change,” Lindenbaum said. “Until there is systemic change from the rabbis, then the situation is going to continue.”

But ORA leaders contend that enacting the kind of change that JOFA supports — wherein Orthodox rabbis would commit to finding ways to annul a Jewish marriage if a get is denied, as one example — is an uphill battle. Better, ORA leaders say, to take action on specific cases.

“You need to have a very firm consensus of Orthodox rabbis to effect systemic change,” said Jeremy Stern, assistant director of ORA. “If JOFA wants to work for that, that’s wonderful, but it’s not going to help Lonna Kin, not this year and not next year.”

According to Joshua Ross, who co-founded ORA in 2002 while still an undergraduate at Yeshiva University, the group has helped to resolve 92 cases. Ross, 26, said that in about 15 cases, the rallies, which are held both outside husbands’ homes and outside their places of employment, eventually have resulted in the securing of a Jewish divorce. In many cases, he said, the simple threat of a rally is enough to produce a get from a recalcitrant husband. “The point is that pressure works,” he said. “It doesn’t work all the time, and it doesn’t work very fast, but it eventually produces a get.”

In the case of Doris Davis, who lives in Oceanside, N.Y., working with ORA ultimately proved successful. Davis, an Orthodox day school teacher, was married for 26 years before she attempted to divorce her husband. She approached ORA in 2004, when she was unable to secure a get. ORA held a handful of rallies outside the man’s home, but it wasn’t until the group’s members began hanging posters with his photo at synagogues in Brooklyn, where he’d moved, that he succumbed to the public pressure, Davis said. “Absolutely, it was effective,” she said of ORA’s tactics.

But that is not always the case. Vivian Miltz, a resident of Brooklyn’s Flatbush neighborhood who was an agunah for seven years, said that while she is deeply grateful to ORA for taking her case and doing everything in its power to secure a get, the group’s efforts proved fruitless. “The rallies didn’t do anything,” Miltz said. “My husband didn’t care, his boss didn’t care. In my case, my ex was very stubborn.”

There are no statistics on the numbers of agunot in America, but the majority of cases are concentrated in the New York area, the epicenter of the Orthodox world.

The rallies often garner the support of local rabbis. In L.A., two prominent Modern Orthodox rabbis encouraged their synagogue members to participate in the March 9 rally and even showed up themselves. Rabbi Steven Weil of Beth Jacob Congregation in Beverly Hills has been particularly active in the Meir Kin case, as Lonna Kin’s parents are reportedly members of his synagogue.

Lonna and Meir Kin have been divorced civilly, and since 2004, Lonna has been pursuing a get that she considers valid. A Web site defending Meir Kin contends that he has, in fact, granted Lonna a get at the Beth Din Zedek Kedushas Levi, a rabbinic court in Monsey. Lonna Kin was unavailable for comment, but ORA leaders say that they do not recognize that rabbinic court as legitimate. According to a letter posted on a Web site sponsored by ORA, the Israeli rabbinate also does not recognize gets issued by the rabbis at that particular beit din.

Rabbi Yosef Kanefsky of B’nai David-Judea, a progressive Modern Orthodox synagogue in the Pico-Robertson neighborhood, said that at least a dozen of his congregants were at the demonstration. As to why he supported the rally? “Anyone who cares about the inner morality of Jewish law has to cry out,” he said.

Those on both sides of the debate over tactics expressed frustration at the slow pace of change. “At JOFA, we’ve been working on this for the last 11 years, and sometimes we throw up our hands because we say, ‘What have we done?’” Lindenbaum said. “Frankly, in a world that’s moving to the right, we’re not very hopeful.”