Cleaning Toilets, and Other Victim Fantasies 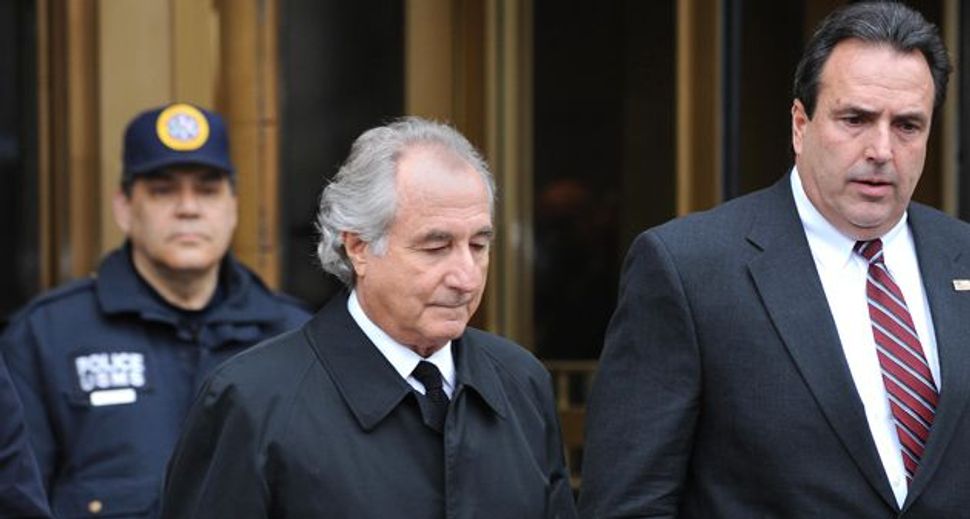 Just Deserts? As disgraced financier Bernard Madoff (center) awaits sentencing, his victims try to imagine a punishment that would fit the crime. Image by GETTY IMAGES

What would be a fair punishment for Bernard Madoff?

Life in prison is considered probable for Madoff, who pleaded guilty Thursday to 11 criminal charges. But that’s just for starters. How about toilet-cleaning duty in the slammer, a job as a Wal-Mart greeter or simply oblivion?

Those are some suggestions from victims of Madoff’s Ponzi scheme, which defrauded individual investors, charities and institutions out of an estimated $65 billion. Elderly retirees who lost their life savings have been driven back into the work force. Charities have closed their doors, and the Jewish philanthropic world will be reeling for decades from the blow Madoff dealt.

Madoff planned to plead guilty to 11 felony charges March 12, his lawyers said; the judge will decide whether to accept the plea, and sentencing will occur later.

His victims, for the most part, seek not vengeance, but justice.

“I read about a 90-year-old man who was a victim of Madoff who had to go take a job as a greeter at Wal-Mart. I think Mr. Madoff should take that job, send his salary to that man every week and report to his empty jail cell every night,” said New Jersey State Senator Loretta Weinberg, 74, who lost her life savings to Madoff.

Weinberg said she hears from other former clients of Madoff constantly.

“I hear stories of people who are worse off than I am. Does that make me feel better? No, it just makes me feel sad,” Weinberg said.

Ian Thiermann, 90, is the Madoff victim who now works as a greeter — at a family-run grocery store, actually, not Wal-Mart — but otherwise the story is true. Far from bitter, he said he enjoys telling people about store specials and feels grateful for the $10-per-hour position: “I’m so deeply appreciative of them for offering me this job.”

Thiermann said he wishes there were a way to get through to the man and change his heart.

“If it were possible to really change the justice system universally, and have people who have done something like Madoff spend 15 or 20 years learning how to be thoughtful and kindly rather than taking advantage of their billions — that would be something,” said Thiermann, who lives in Ben Lomond, Calif.

Burt Ross, a former mayor of Fort Lee, N.J., who lost $5 million, applauds Wiesel’s idea, but said he fears that Madoff lacks the basic human compassion to be moved by such a display.

His suggestion for Madoff is a little more hands-on: “I hear he’s a neat freak. In a federal penitentiary, some people are assigned to clean toilets, and I think that would be appropriate.”

Many Madoff survivors contacted by the Forward said that they try not to think too much about Madoff, even going so far as to try to erase his name from their vocabularies. Shunning or blotting out someone’s name is a powerful concept in many cultures. Jews, for one, are commanded by the Torah to “blot out the memory of Amalek from under heaven.” The Amalekites were a people who singled out for attack the “hindmost, all that were feeble” among the Israelites wandering in the Sinai desert.

“We don’t mention his name anymore. It’s as if he doesn’t exist. We like to forget these people exist and move on,” she said.

For some, Madoff’s punishment is beside the point. Richard Sonking, a retired small-business owner who divides his time between New Hampshire and New York, said he’s more concerned about justice for the victims. Specifically, he wants the Securities Investor Protection Corporation, a federally mandated agency that insures investors against fraud committed by brokerage firms, to pay the maximum insured amount to Madoff clients.

“They need to step up to the plate and insure investors for the full amount of $500,000,” Sonking said. “Whether he goes to prison for 10 years or 50 years isn’t going to change my life… but if they paid out the maximum amount, the victims would feel better and they would be in a better place to help their lives go forward.”

Most survivors said that Madoff, at the very least, should have to return the money he took — and they believe that Madoff’s wife, Ruth, should not be allowed to keep the $62 million her lawyers claim is rightfully hers.

“I can’t believe someone would have the chutzpah to go into court and demand that,” Ross said.

Prosecutors seem inclined to aggressively pursue Madoff’s assets: On March 10, Lev L. Dassin, of the United States attorney’s office for the Southern District of New York, said the government intends to seek at least $170 billion in forfeited assets from Madoff.

In addition to reparations, many victims want full disclosure.

“I want to know the details — how did he do this, who was involved, how did he get away with it, how can we prevent this in the future,” said Robert Chew, a marketing consultant and writer who lives in Montrose, Colo. He and his wife are trying to sell both their homes after losing $1.2 million; his mother-in-law, whose savings were entirely invested with Madoff, has been forced to leave her assisted-living center, go on Medicaid and move to a nursing home.

Chew says it will take more than punishment to provide justice for Madoff’s wrongdoings: He wants regulatory reform to prevent future con men from doing to others what Madoff did to him.

“Business as usual is not good enough,” Chew said.

Lana Gersten contributed to this report.

Cleaning Toilets, and Other Victim Fantasies