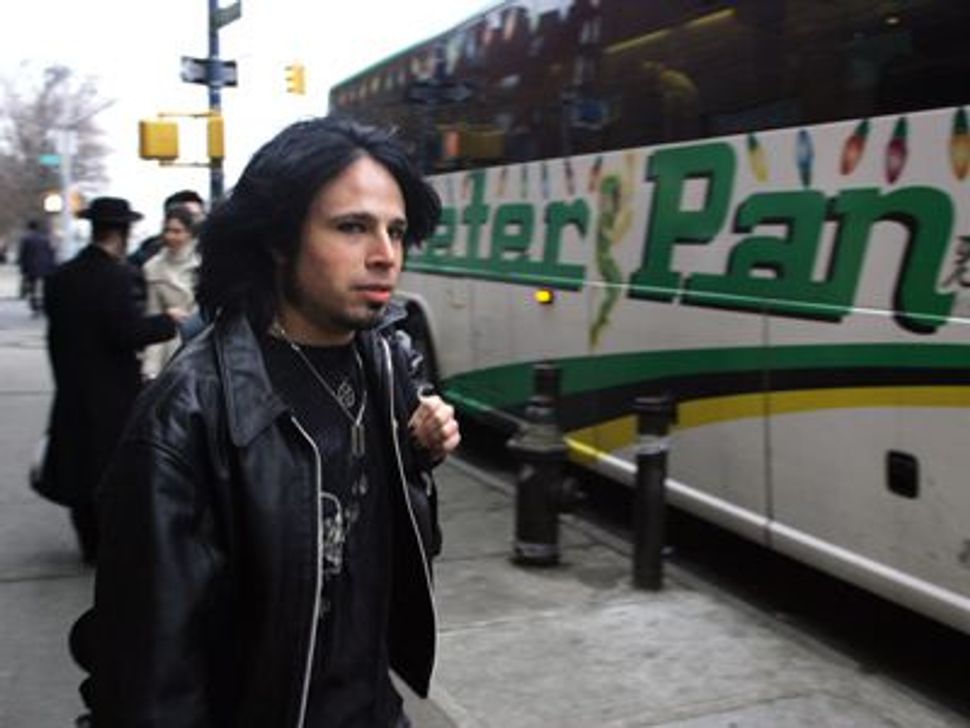 Bound for Albany: Joseph Diangelo, who says he was abused as a child in a Brooklyn Hasidic community, boards a bus on March 11 to lobby the New York State legislature for a bill to extend the statute of limitations for claims of sexual abuse. Image by ARIEL JANKELOWITZ

Jews who say they were sexually abused as children by their rabbis are seeking to tip the balance in favor of a long-stalled bill that would extend the statute of limitations for child sexual abuse in New York State — legislation that could have far-reaching impact on some Orthodox communities as they struggle with emerging allegations of child abuse. 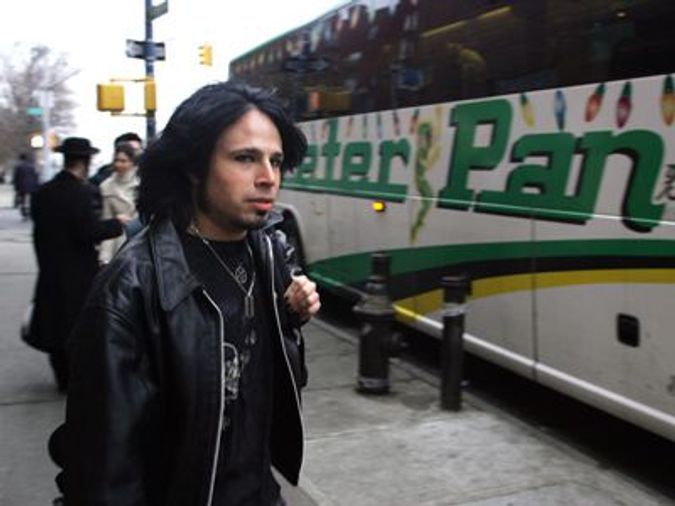 Bound for Albany: Joseph Diangelo, who says he was abused as a child in a Brooklyn Hasidic community, boards a bus on March 11 to lobby the New York State legislature for a bill to extend the statute of limitations for claims of sexual abuse. Image by ARIEL JANKELOWITZ

The Catholic Church, fearing crippling lawsuits, has lobbied strenuously against the bill and has blocked it in the State Senate for the past three years, even though it has passed with strong margins in the Assembly. But sponsors and supporters think that this year, the bill will finally be approved.

Mostly, that’s because Democrats now control the state Senate and key Senate leaders say they are in favor of extending the statute of limitations. But advocates say that fledgling lobbying efforts by Jewish activists have also played an important role by demonstrating that child sexual abuse is not just a Catholic issue.

“The main complaint the Catholic bishops have is that it’s targeted at them,” said Marci Hamilton, a professor at the Benjamin N. Cardozo School of Law who is a leading expert on child sexual abuse and an advocate for the bill. “When Orthodox victims came forward and started talking about their issues, it made it clear that they needed this protection, too.”

No less important, Hamilton said, has been the decision by Orthodox communal leaders, so far, to stay on the sidelines. “When the rabbis did not join forces with the church, it spoke volumes,” she said.

The legislation is expected to once again be voted on by the Assembly — and easily pass — by the end the month.

The bill would lengthen the statute of limitations for both civil and criminal cases. It also would open a one-year window for civil claims by victims whose alleged abuse occurred too long ago for them to sue even with the longer deadline.

So far, no Jewish organizations have formally opposed the bill. Advocates have heard rumors of Agudath Israel of America, an umbrella group for many Orthodox institutions, quietly lobbying against it; but its spokesman Rabbi Avi Shafran said the organization is formulating a position on the issue and hasn’t yet come to a conclusion.

Meanwhile, Catholics are turning up the heat, and calling for Jewish leaders to join the opposition.

“Any organization that deals with children ought to be opposed to the bill because it opens them up to unfair claims. Clearly it will be devastating for the Jewish community,” said Dennis Poust, director of communications of the New York State Catholic Conference. “The reason statutes of limitations exist is because evidence goes away, memories fade, witnesses die. We think this is an effort to bankrupt the church and other nonprofit organizations.”

Under current New York law, alleged victims of child sexual abuse must file a criminal or civil complaint within five years of the abuse, or five years after they turn 18, making 23 the upper age limit. The Assembly bill, sponsored by Assemblywoman Margaret Markey, a Queens Democrat, would add five years, extending it to 28.

The church especially objects to the one-year window where individuals who allege they were abused decades ago can sue their abusers in civil court.

Experts on the issue — and the alleged victims themselves — say child victims can take many years, or even decades, after they reach adulthood to process what was done to them and act on it.

“Most victims of abuse actually don’t come forward or start dealing with their abuse until their 30s, 40s or much later,” said Joel Engelman, who alleges he was repeatedly abused by the principal of his Satmar school.

Like many other alleged victims, Engelman claims the school was made aware of the teacher’s actions but covered up for him.

Engelman said his experience shows the need for statute-of-limitations reform. Unlike most victims, he came to terms with his abuse and told his parents about it when he was in his early 20s. When he and his parents confronted leaders at Brooklyn’s United Talmudic Academy with Engelman’s allegations against Rabbi Avrohom Reichman, the school removed Reichman from his teaching position.

But the school reinstated the rabbi last July — one week after Engelman turned 23 and was no longer able to sue. “They flat out said to my parents: ‘There’s nothing you can do. Goodbye, we don’t care,’” Engelman said.

Officials from the United Talmudical Academy did not return a phone call seeking a response to Engelman’s allegations.

The proposed legislation would allow people like Engelman to sue his alleged abuser and also the school. But Markey says the bill’s greatest impact will be identifying suspected pedophiles, thus preventing future abuse.

“Statutes of limitations are basically arbitrary, and it’s our responsibility as legislators to support the victims,” Markey said.

Previously, California, Minnesota and Delaware passed laws with similar windows allowing people to revive claims of old abuse. In California, the 2003 window prompted about 1,000 lawsuits, some 850 of which targeted the Catholic Church. Poust says the wave of lawsuits in California forced the church to settle many cases regardless of merit, forcing the church to sell off properties and decrease funding to poor parishes.

Markey is unimpressed by such complaints: “It has not bankrupted anyone,” the assemblywoman said. “Most importantly, in California it identified 300 predators that were not known before. That’s the real reason to do this — to protect others.”

In the past three years, four ultra-Orthodox rabbis in Brooklyn and their schools have been sued or arrested for the abuse of boys. When Brooklyn Assemblyman Dov Hikind, a co-sponsor of Markey’s bill, asked listeners to his popular radio show to call in and report child sexual abuse, he got more than 1,000 responses — though, controversially, he has refused to release names of suspected pedophiles to police.

Meanwhile, as he lobbies for change alongside other abuse survivors, Engelman feels haunted by his own lost opportunity to pursue justice.

He said, “I wake up every morning thinking, the guy’s still in the classroom.”