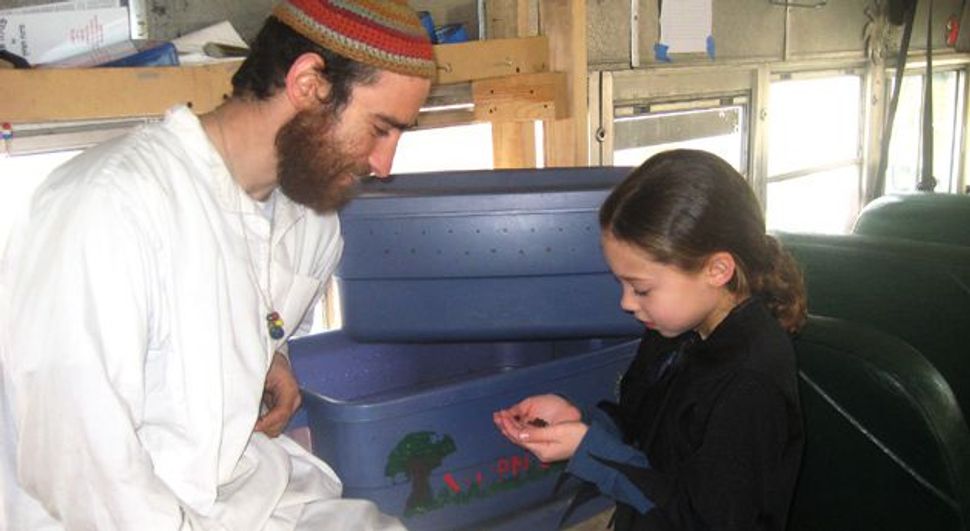 Mobile Classroom: An educator and a student aboard the Topsy-Turvy Bus, participating in the Teva Learning Center?s Jewish environmental program. Image by COURTESY OF THE TEVA LEARNING CENTER

Once a generation, every 28 years, Jews recite the Blessing of the Sun, the same prayer that is said upon seeing majestic mountains, seas, rivers and deserts: “Blessed are you, our God, King of the Universe, who effects the work of creation.” This is the moment that Jewish tradition says the sun returns to the original spot in the cosmos as when it was created on the fourth day.

So what does this event, called Birkat Hachamah, have to do with a Topsy-Turvy Bus once owned by Ben Cohen of Ben & Jerry’s ice cream? 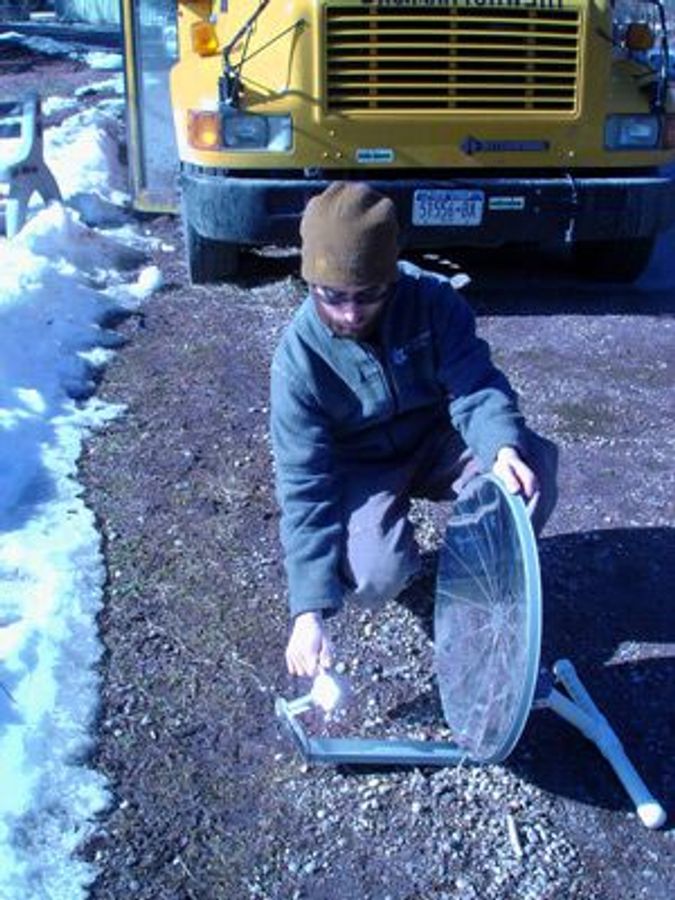 Quite a bit, according to the Teva Learning Center, a Jewish environmental education institute in Falls Village, Conn. Teva, which acquired the bus early this year, is teaching students from Vermont to Washington, D.C., about how to best harness the sun’s power through green technologies, solar energy and energy conservation.

The mobile education program is one of many events — several with environmental themes — that are being held across the globe for Birkat Hachamah*, *which in 2009 falls on April 8. In the northern Israeli city of Safed, an eight-day festival will be held. In the United States, 14 Jewish organizations have joined to launch BlesstheSun.org, a Web site with links to events, educational materials and ideas for activities. The United Synagogue of Conservative Judaism has designed a 68-page study text focusing on the sun prayer and on environmental themes.

Teva’s Topsy-Turvy Bus will offer a Jewish environmental program at Jewish day schools and at congregational Hebrew schools throughout the Northeast and mid-Atlantic regions, and as far west as Cleveland. The educators, led by driver and program coordinator Jonathan Dubinsky, will roast marshmallows, bake cookies and make challah — using nothing but the energy of the sun. They also will make sun prints on photosensitive paper, and urge children and parents to conduct home energy audits and schools to have institutional audits.

The bus is actually a bus and a half mashed together, with the top half upside-down, wheels sticking in the air like a beetle trapped on its back. Cohen used it to promote the message of his not-for-profit Web site TrueMajority.org, which protested the government’s “topsy turvy” military spending at the expense of social needs at home.

The bus was then taken over by the White House Organic Farm Project, a group that lobbied to have the front lawn of the White House turned into an organic garden. The group, in turn, donated it to Teva, and Dubinsky began retrofitting it to run on wasted vegetable oil. The bus is now equipped to roll into a town, pull up to the local Chinese or fast-food restaurant, ask for used cooking oil, filter that oil and fuel — that is, oil — up the bus. The bus gets seven miles to a gallon of vegetable oil.

“Just as Birkat Hachamah is a unique moment when we say a blessing to celebrate the sun, the main source of energy on our planet, it’s also a wonderful opportunity to recognize that every type of fuel we use daily — electricity, gasoline, oil, natural gas — can ultimately be traced to the sun,” Teva director Nili Simhai said. “Since the Talmud tells us the sun begins a “long cycle” every 28 years, what better time for this new generation of Jews to explore the best way to use the sun’s energy?”

Rabbi J. David Bleich, professor of law and ethics at Yeshiva University, says he is “bemused” by environmental activity being linked to Birkat Hachamah. Bleich, whose 1981 book “Birchas Hachamah” is an exhaustive English-language treatment of the subject, says the event “has nothing to do with the environment. Environmentalism is a totally worthy cause, but we’re dealing with apples and oranges. The blessing is about seeing the wondrous work of the Almighty. The event is an occasion for reflection of the miracle of the universe. How you get environmentalism out of that is a little bit of a stretch.”

Asked what the rabbis would have said on the subject, Bleich replied, “They’d be silent.” On this point, Simhai agrees. “Did the rabbis have a category of environmentalism?” she said. “No. That’s a modern concept, only 40 years old.

“But they had lots of concepts about how people should treat each other and how they should treat the land. I think our tradition is really good about creating moments of recognition, awareness and gratitude. I reject the notion that these sorts of environmental things are tacked onto our tradition. It’s true the rabbis didn’t have a category for it, but the root of appreciation and thankfulness completely ties into grateful care and use.”

Simhai says the majority of the bus tour will take place before the day of Birkat Hachamah, although Teva is continuing the event as part of the year of the sun. “We’ll be handing out materials and urging people to come out on April 8 when the sun rises,” she said.