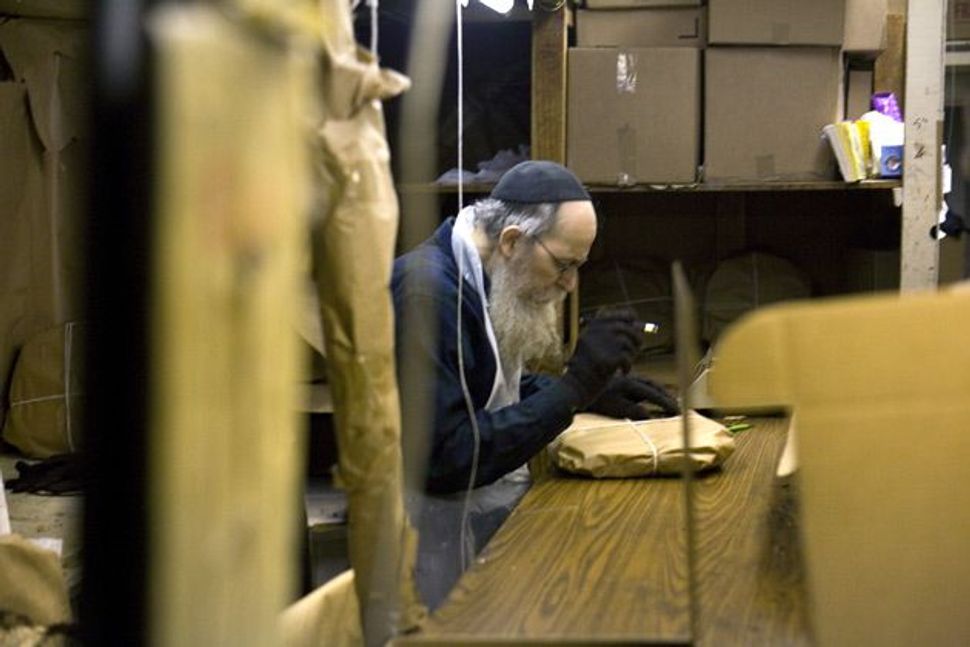 Walk through the unmarked black doors of a nondescript brick building in Brooklyn, and you stumble onto a time machine.

Here, at one of the half-dozen or so shmura matzo factories remaining in New York, a bustling team of bakers keeps alive the art of making matzo the old-fashioned way.

“This is the way it was done when they first made the matzo, going back 3,000 years, maybe more,” said Yitzchok Tenenbaum, manager of Crown Heights’ D & T Shmura Bakery, as he watches crisp, smoking rounds of matzo being pulled from the roaring coal- and wood-fired oven. “It’s good stuff — just flour and water, no preservatives.”

Like the original matzo the Jews made as they fled Egypt, everything at a shmura matzo bakery is done by hand — and quickly. Shmura means “watched” or “guarded,” and indeed, every step is carefully supervised.

The process starts when flour and water — each stored in separate booths to prevent accidental mixing — are kneaded together. A runner then carries the sticky dough to a long, narrow table that is covered in brown butcher paper. About two dozen people briskly roll egg-sized lumps into dinner-plate-sized rounds. Above the roar of the fans and the clank of their wooden rolling pins, the women and a few of the men chat and laugh. The scene might come straight from a drawing of the ancient Israelites, minus the iPod cords dangling from some of the young men’s ears.

The rollers drape their finished products over wooden pins and send them to a smaller table, where the rounds are punched through with tiny holes.

From there, five or six matzot are hung over a long wooden rod and pushed over to the baker. With practiced movements, he slides them into the 1,000-degree oven, flipping them into place. Instantly, the thin dough begins to brown and crackle. After about a minute, the baker reaches into the oven again and pulls out the finished matzot.

Unlike factory-made matzo, shmura matzo is rough around the edges, usually blackened in places. That’s all part of the charm.

“They have a real, honest-to-goodness, handmade matzo,” said Scott Goldshine, general manager and matzo buyer at Zabar’s, on Manhattan’s Upper West Side. At Zabar’s shmura matzo at $20 to $25 a pound finds a market outside its primarily Hasidic customer base. “It’s not even, it’s burned. That really adds a touch of authenticity to the Seder, which means a lot to people.”

Rebecca Dube is a staff reporter at the Forward.