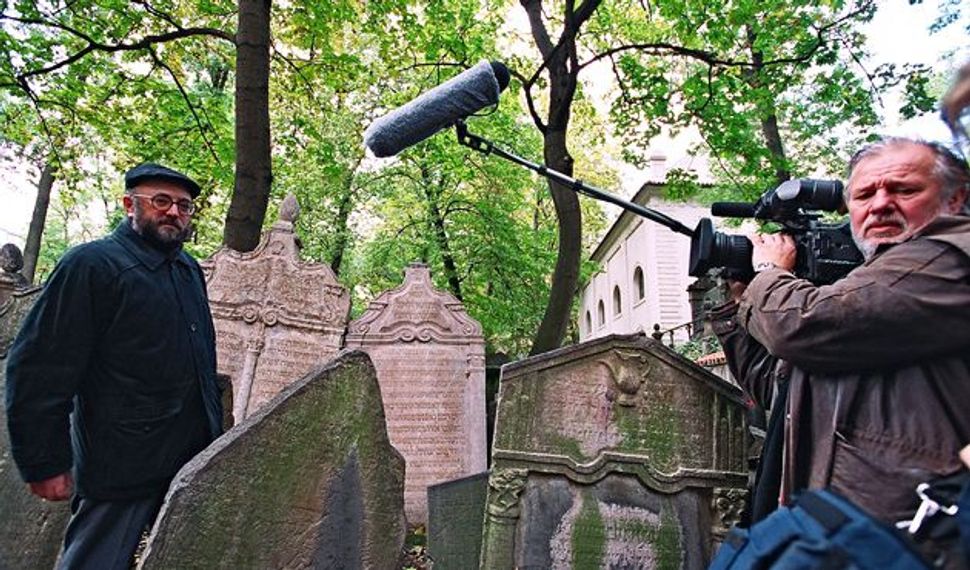 Behind the Scenes: On the set of Mark Podwal?s documentary ?House of Life: The Old Jewish Cemetery in Prague,? scheduled to air on PBS in April. Image by KAREL CUDLIN

Mark Podwal is obsessed with Prague. Not only has the New York-based artist and dermatologist visited the city 15 times, but he also has a Golem story by which he swears.

In 1997, during a major restoration of Prague’s 700-year-old Altneuschul synagogue, the curator of the project invited Podwal to see the normally off-limits attic where the Golem, a man-like creature built out of clay with mystical powers, is said to rest.

Podwal circumvented the “extremely dangerous” iron rungs set in the synagogue’s eastern wall and climbed the less treacherous temporary scaffolding. “Whenever asked what I saw, I refuse to tell, other than that I was quite surprised,” he said, noting that the photos he took have disappeared. “I’ve been looking for them for over 10 years.”

Had the photos turned up, they would have fit perfectly into Podwal’s 52-minute documentary, “House of Life: The Old Jewish Cemetery in Prague,” co-produced with filmmaker Allan Miller and scheduled to air on April 6 on the public television station Thirteen/WNET and on other PBS stations. Podwal calls the partnership with Miller “bashert,” as “Allan barely knew anything about the subjects of our film, and I barely knew anything about how to make a film.” Miller has also visited Prague many times with his Czech wife, Marie Winn, who escaped to America during the Second World War.

In its focus on the more than 500-year-old Old Jewish Cemetery in Josefov, Prague’s Jewish quarter, the documentary, narrated by actress Claire Bloom, juxtaposes the ancient city with its modern descendant. Once the capital of the Holy Roman Empire, today Prague is filled with ads for Coca-Cola and McDonald’s and with shops where tourists can buy Golem dolls and candles. One shot pans across a crucifix containing the Hebrew words kadosh (holy) and har tzivaot (mountain of hosts), just beside the letters INRI, the Latin acronym for “Jesus of Nazareth, King of the Jews.” And lest the viewer think the cemetery remains holy, Holocaust survivor Zuzana Vesely tells the camera that children, under Nazi rule, were permitted to play only outdoors in Prague’s “new” Jewish cemetery. She remembers her teenage peers kissing, and even having sex, among the tombstones.

Other cast members tell colorful, albeit less blasphemous, tales. Conservationist Petr Justa remembers having a tough time convincing the caretakers to permit his team to clean the stones, and Alena Ježková reveals she no longer visits the cemetery, because of the admission fee. Historian Dan Polakovi discusses his project of digitizing each of the 12,000 tombstones, and Tomáš Pasternak, head of the Jewish burial society Chevra Kadishah, suggests that Prague would have 100,000 Jews if not for the Nazis. He laments the city’s unused Jewish landmarks.

Noemi Holekova, public relations director of the Jewish Museum in Prague, which screened the film last September, said that “a number of people” erroneously identify Jewish Prague “solely with the legend about the Golem.” She said Prague is developing “a more and more dynamic Jewish community” and that the museum is the Czech Republic’s most visited, with 650,000 guests a year.

Podwal stresses that the film gives viewers the unique opportunity of avoiding the crowds so that they can get beyond the cemetery’s roped-off paths and meet Jewish Museum staff, Prague’s chief rabbi and other notable scholars. Viewers also get to hear a soundtrack featuring the Prague-based bands Klezmorim and Mishpaha, as well as Chava Alberstein, the Klezmatics, Andy Statman, Alberto Mizrahi and the vocal ensemble Western Wind. Miller said the film differs from his previous ones insofar as the subject is “inanimate… there are ghosts there,” so “I built the film around a great deal of music.”