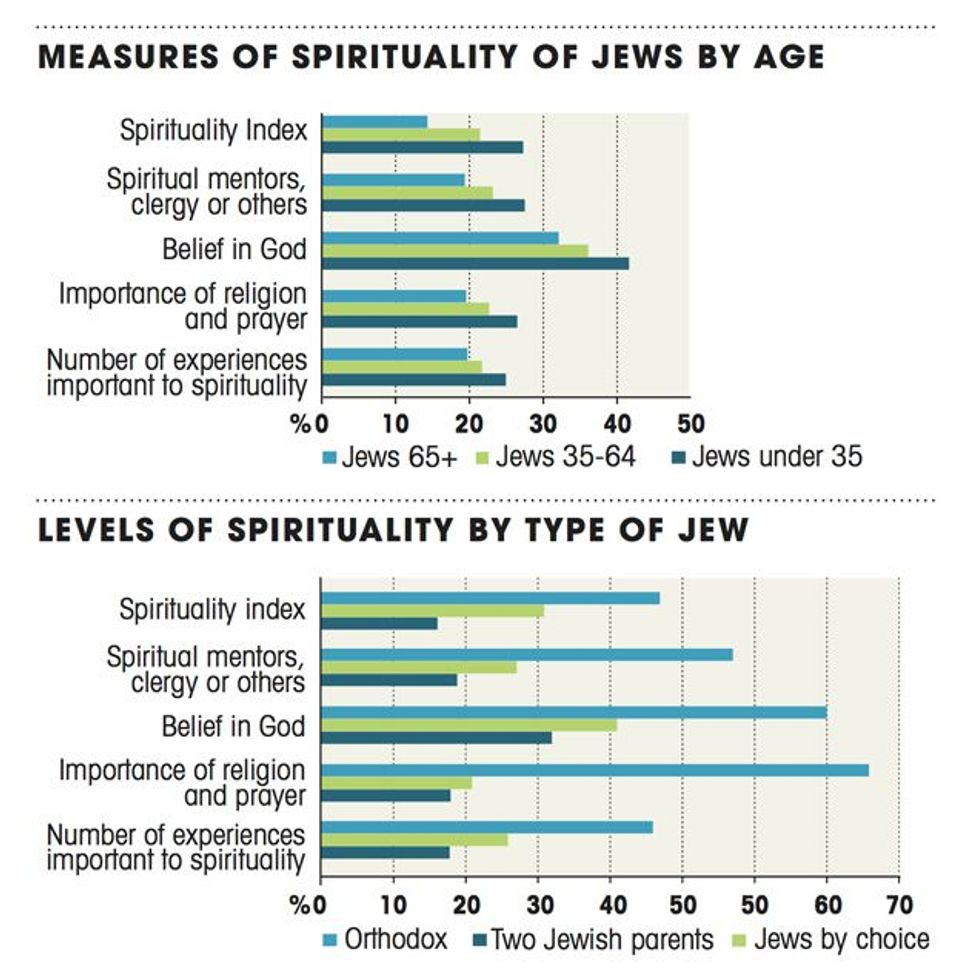 In a seeming departure from centuries-old traditions of American Jewish skepticism, interest in spirituality is markedly on the rise among Jewish young adults, according to a study released this month.

The study’s authors note the trend with cautious optimism, suggesting that heightened spiritual interest might provide a “route to Jewish engagement” and “broaden Judaism’s appeal” among some disaffiliated young Jews. Spirituality might also “serve as a common religious language” to ease tensions within the Jewish community, the study says, particularly between Orthodox and non-Orthodox Jews.

But a close reading of the study’s findings suggests the opposite, possibly pointing toward a future increase in polarization and hostility among Jews. Worth noting in particular are the two groups of younger Jews that show the strongest interest in spirituality. They are the two fastest-growing Jewish demographic subgroups: Orthodox Jews, and Jews with at least one non-Jewish parent or spouse — that is, converts, intermarried Jews and children of intermarriage. 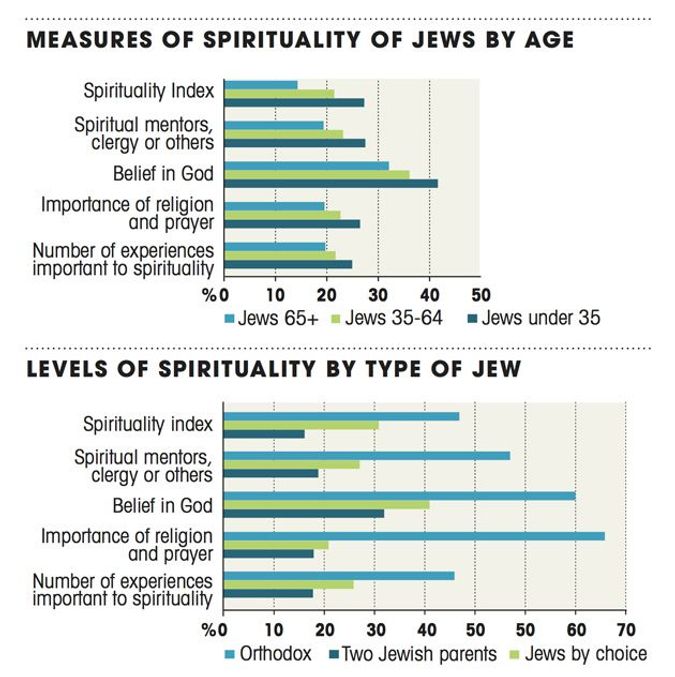 Since colonial times, American Jews have been noted for their secularism and liberalism. Modern surveys of American religious attitudes consistently find Jews ranking lower than almost any other religious group on such traditional matters as belief in divine intervention and the afterlife, and regular attendance at services.

The new study, the first of its kind, offers a much broader and deeper look at Jewish religious attitudes. It consists of two separate surveys conducted in September 2008. One questioned a sample of nearly 1,600 Jewish respondents; the other posed the same questions to slightly more than 1,500 respondents representing the general population. The numbers are big enough to permit comparisons not only between Jews and non-Jews, but also among various Jewish demographic and denominational groups.

The study was sponsored by Synagogue 3000, an organization that works with congregations on renewal and revitalization. It was conducted by two scholars from the New York division of Hebrew Union College-Jewish Institute of Religion, sociologist Steven M. Cohen and theologian Lawrence Hoffman. The questionnaire was administered online and by mail to representative population samples assembled by a consumer marketing firm, and has a margin of error of 3%.

The findings show Jews overall lagging far behind other Americans on questions regarding issues designed to elicit broad spiritual leanings, such as desire to connect with God, frequency of communal and private prayer, quest for transcendent meaning and recent experiences of a spiritual nature.

Spirituality, broadly defined, has taken a prominent place in the general culture in recent decades. In large part, the authors note, the rise of spirituality is related to the decline of traditional organized religion. Mainstream church-going has given way since the 1970s to growing interest in evangelical Christianity, New Age religion and various free-form spiritual teachings. Much of it draws on traditional Protestant language for concepts like personal redemption through grace, God’s love and the quest for transcendence.

For Jews, the authors write, “the language is alien.” American Jews “can be Jews by culture, ethnicity, religion, Israel-consciousness, social networks, and more.” They have little interest in talk about yearning for God or affirming faith. “In short,” the authors write, “Jews are less religious than non-Jewish whites.”

This trend of rising spirituality among younger Jews “is all the more significant,” the authors wrote, “because among non-Jews, the young score *lower *than older people on spirituality measures.” As a result, we might yet see a “narrowing of the once wide chasm between Jews and others with respect to inter-est in spirituality.”

First, a word of explanation: The researchers grouped the survey questions into broad categories — belief in God, importance of religion and prayer, attachment to spiritual mentors, overall spiritual inclination — and then averaged out the responses within each category for the various subgroups of participants. The averages yielded rankings, which allow for comparison between subgroups.

Those comparisons can be dramatic. For example, when measuring overall spiritual leanings — what the researchers called the “spirituality index” — non-Jews over 65 scored 42% or three times higher than the 14% scored by Jews in the same age range.

Scores on the importance of religion and prayer were not much different.

Of all the study’s findings, the most arresting are the responses ranked by type of Jew. The researchers grouped them, with good reason, in three clusters: Orthodox, non-Orthodox with two Jewish parents and non-Orthodox with at least one non-Jewish parent or spouse (that is, intermarrieds, Jewish children of intermarriage and converts). The authors call that last category “extended Jews-by-choice,” combining Jews-by-choice, as converts are commonly known, with children of intermarriage, who effectively choose as adults how they will identify themselves.

As noted, the two subgroups that score highest overall in spirituality are the Orthodox and the extended Jews-by-choice. The authors suggest, therefore, that spirituality might provide a common language to help ease denominational tensions as the community matures.

That’s not out of the question; after all, many of those Jews who stare at each other across denominational barricades today are cousins or siblings who will come together tomorrow at a wedding or a Seder.

The breakdown of responses in the survey doesn’t strengthen the notion, though. It turns out that Orthodox Jews frequently score highest in areas where extended Jews-by-choice score lowest. When Orthodox Jews rated the importance of religion and prayer, or the role of a spiritual mentor, their collective scores were off the charts, running as high as 77%. The scores of Jews-by-choice on those questions weren’t much higher than two-Jewish-parent scores.

On the other hand, Orthodox Jews registered their lowest score, less than 50%, on the spirituality index, measuring open-ended quests and yearnings. Jews-by-choice, on the other hand, got their best score on the spirituality index — not counting belief in God, which was a top scorer for everyone. In other words, the spiritual categories that animate Orthodox Jews most are the ones that animate extended Jews-by-choice least, and vice versa.

It’s important to note that in absolute numbers, Orthodox Jews scored higher than Jews-by-choice in every category. As for Jews with two Jewish parents, they scored below 20% in every category except belief in God.

The numbers published in the Synagogue 3000 study suggest that the biggest determinant of Jews’ attitudes toward spirituality is the household in which they grew up. Jews with two Jewish parents typically inherit the prevailing American Jewish tradition of ethnic, secular Jewishness. Orthodox Jews mostly inherit a disciplined religious culture, while Jews by choice typically grow up in two cultures and are shaped by both.

In the end, it appears that the biggest factor causing the rise in Jewish spirituality — and it is a measurable rise — is the changing makeup of the Jewish community. As the study shows, Jews with two Jewish parents account for 86% of all Jews over 65, while Orthodox Jews constitute 5% of the total, and Jews-by-choice make up 9%. For the baby boomers and Gen X, those with two Jewish parents drop to 77% and Jews-by-choice rise to 17%, while Orthodox Jews remain stable at 6%.

Below age 35, however, Jews with two Jewish parents fall to just 57%, while Jews-by-choice rise to 28% —and Orthodox Jews triple in number to 15%.

Can the growing presence of spirituality create a new common language in this newly emerging Jewish community? Anything is possible, but it seems unlikely. The traditional, law-based spirituality of Orthodoxy has little in common with the open-source syncretism of the new multicultural Jews. Indeed, many of those new Jews aren’t even recognized as Jews under Orthodox rules, so dialogue seems unlikely.

For the most part, the burden of preserving Jewish unity will fall on the group that still has dialogue with both sides, namely the non-Orthodox, two-Jewish-parent Jews. But they will be hard pressed to moderate a spiritual dialogue in the long term. They’re the ones who are least interested in spirituality. Besides, they’re shrinking.

It’s not so much that spirituality is becoming more appealing to Jews who didn’t used to be interested, though there is a bit of that. Mostly it’s that the Jews who aren’t interested are disappearing.