When the Last Survivor Is Gone 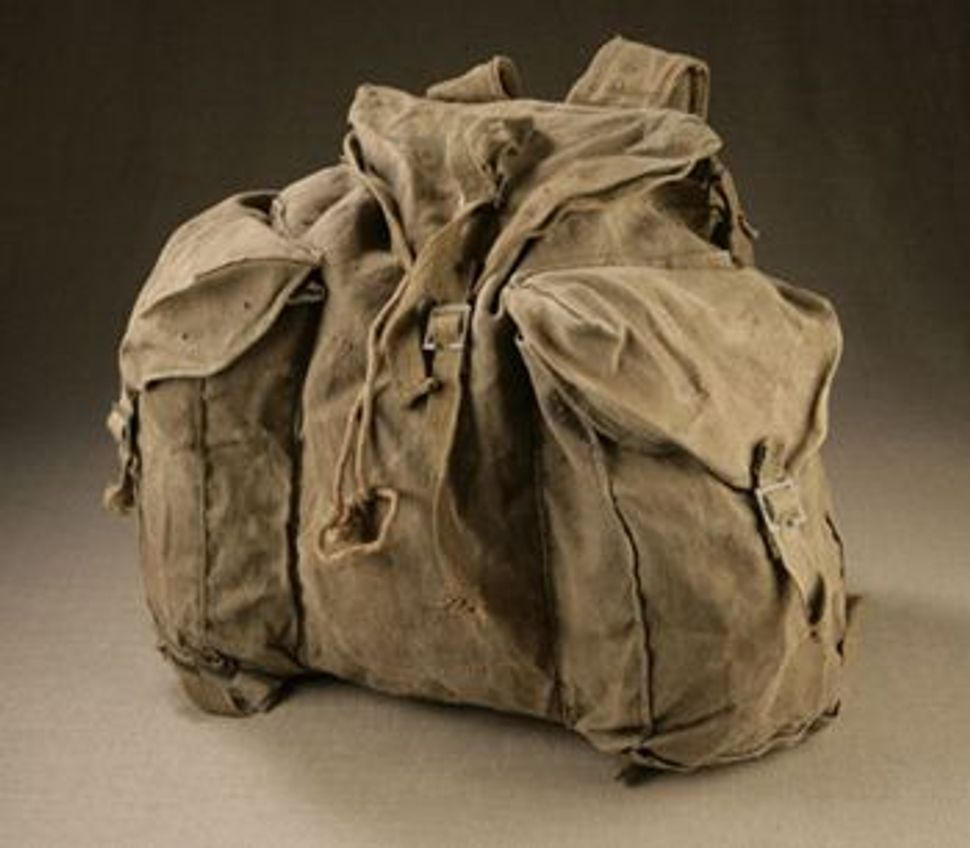 Survivor?s Backpack: Boris Kacel of Skokie, Ill., had this backpack when he escaped from Buchenwald. He donated the pack to the new Illinois Holocaust Museum & Education Center. Image by IHMEC: CoUrTESy oF BorIS KaCEl

Two years ago, an MBA student whom I mentored wrote her thesis on how major Holocaust organizations were planning to deal with the inevitable — the fact that soon, all too soon, there would be no survivors.

Her conclusion was sobering.

The leadership of every institution acknowledged the problem and dreaded that moment. What were they doing to plan for it? 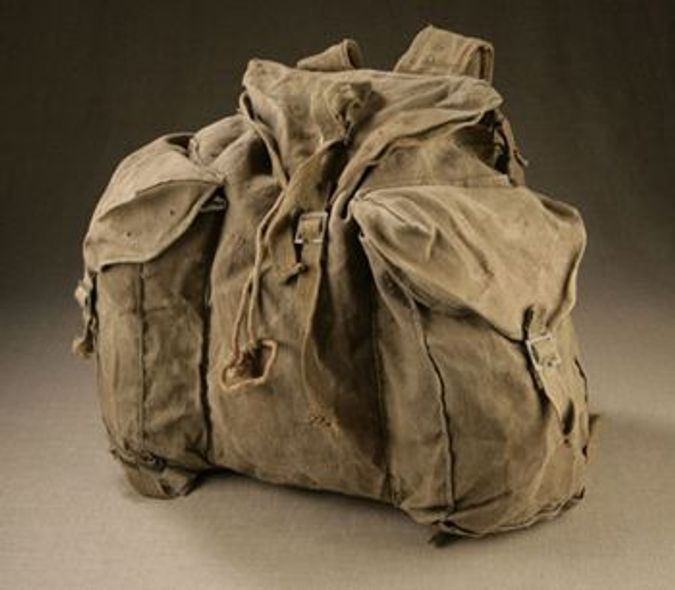 Survivor?s Backpack: Boris Kacel of Skokie, Ill., had this backpack when he escaped from Buchenwald. He donated the pack to the new Illinois Holocaust Museum & Education Center. Image by IHMEC: CoUrTESy oF BorIS KaCEl

A word of demographics: As a rule, only the young survived. At Auschwitz, the old and the infirm, young children and women with children were sent to their deaths immediately. Only the young and the able bodied were *selekted *to work. Even then, those who could not endure the hardships of concentration camp life — arduous work, limited nutrition, Polish winters, and the physical and the psychological assault on their humanity — soon succumbed to despair; death inevitably followed. The walking dead, those who had given up on life, were to be avoided because the distance between survival and despair was razor thin.

Survivors were skilled at eluding death, and few succumbed to death without a fight. But time has taken its toll, and those of us who work with survivors routinely visit hospitals, homes for the elderly, assisted-living facilities and hospice programs; then we attend funerals.

The last survivors will be children of the Holocaust who most often avoided the camps and found refuge in hiding — either openly, by pretending to be non-Jews, or in secret, in attics, basements and barns.

They will be around for another 20 years, but their direct memories will be more limited because they experienced the events known as the Holocaust as very young children.

What have survivors achieved?

Under the leadership of survivors:

• The Shoah has been moved into the forefront of contemporary political and ethical consciousness. It has become the negative absolute, a cornerstone for consideration of values.

• Museums and memorials teaching and commemorating the Holocaust have been created throughout the world.

• Holocaust remembrance has become a basic part of the Jewish calendar and increasingly a part of the calendars of many nations affected by the Holocaust, including the United States, Germany, Poland and Great Britain — as well as the United Nations. Because of Holocaust denial and antisemitism, these countries have intensified the emphasis on Holocaust commemoration.

• Testimony has been gathered on an unprecedented scale, using the most contemporary technologies. In addition, many memoirs have been written. Both of these forms will provide voices of their witness far beyond their lifetimes. For generations, their stories will form the basis for scholarship, films and educational programs.

Some religious Jews consider Yom HaShoah a violation of Nisan, the month of redemption. But in reality, what survivors have achieved may be more biblical than we suspect. Holocaust survivors responded to survival in the most biblical of ways possible: by remembering evil and suffering to deepen conscience, enlarge memory and broaden responsibility, they have made a most particular story universal. It is thus that the ancient Israelites responded to slavery and the Exodus. It is thus that survivors responded to the Shoah.

What will be lost when the last survivor is gone?

Survivors have a unique moral authority.

Such authority will not automatically transfer to their descendants; it will have to be earned by scholars who work through this material; by writers, filmmakers and creative artists who wrestle with the Holocaust and create in its aftermath, and by children of survivors to the degree — and only to the degree — that they embrace the experience of their parents and create from it. Many children of survivors have kept a certain distance from this experience, a distance necessary for them not to live in the shadow of their parents and to achieve their own identity. Their children, the third generation, have less need for distance but a much greater distance to travel to bridge the understandings of one generation to another.

It is also fair to note, as Peter Novick did in his controversial 1999 book, “The Holocaust in American Life” that authority in this field will transfer to institutions that are the guardians of memory, such as Yad Vashem or the United States Holocaust Memorial Museum. But institutional charisma is different from the charisma of experience and from individual charisma. And if in the future, these institutions are handed over to managers who embrace the mission rather than embody it, much will be lost.

Survivors have been essential to Holocaust education. They have served as volunteers, guides and teachers at every Holocaust institution in the United States — less so in Israel — and each memorial or museum can point to survivor volunteers who have become an irreplaceable part of their staff, adding immeasurably to what makes a visit memorable.

Survivors also have been an essential part of the funding of Holocaust institutions.

Their monetary contributions have been significant, and their ability to appeal to others to support these institutions has been irreplaceable. One suspects that many descendants of Holocaust survivors will continue to donate funds, albeit with less urgency than their parents, and often more out of a sense of obligation than of mission. It also must be said that the Conference on Jewish Material Claims Against Germany (The Claims Conference) is now the major supporter of Holocaust education, memoralization, scholarship and exhibitions. There is an 80/20 allocation of funds between assisting survivors and Holocaust education and scholarship, and a 60/40 division between Israel and the Diaspora. So as the last survivor passes, and as the number of survivors diminishes, support for these programs will be severely cut.

Ironically, survivors are no longer essential to the battle against Holocaust denial.

The defense in David Irving’s libel trial against Deborah Lipstadt wisely relied on historical documents and not on survivor testimony. Instead of permitting the Holocaust to be put on trial in the London courtroom, Lipstadt’s counsels brilliantly destroyed Irving by his own writings. Professors Richard Evans, Robert Jan Van Pelt and Christopher Browning, among other scholars, showed what a charlatan Irving is, and Irving’s own diaries revealed his racism and antisemitism. Like the Nuremberg proceedings more than a half-century earlier — and unlike the Eichmann trial in Jerusalem — Irving v. Lipstadt was a trial of documents, not of survivors.

In the second battle — and perhaps the more important battle — against trivialization of the Holocaust, the moral authority of survivors is urgently needed, but it is invoked by both sides when comparisons are made between contemporary antisemitism and the Holocaust, and between President Mahmoud Ahmadinejad and Hitler, and when threats against contemporary Israel are compared to threats made against powerless Jews who have no capability of self-defense nor any ability to attack. Survivors are a useful tool in the polemical response when Israel’s behavior is compared to Nazi Germany, but other factors are at work, and the survivors are, at best, marginal.

When the last survivor is gone, the Holocaust will become about the past and recede into the past. Whether it can still retain its current status is unknown but, perhaps, not unknowable. It is clear that courses will be taught on the Holocaust and genocide. A college recently renamed its Center for the Study of the Holocaust, Genocide and Human Rights, calling it the Center for the Study of Human Rights. In the future, this renaming and rebranding will happen more often and with much less opposition.

Survivors transformed victims into witnesses, dehumanization into a plea to deepen our humanity.

The survivors leave the rest of us who are not survivors or descendants of survivors with an important legacy and significant responsibilities.

We were not witnesses; we have lived in the presence of witnesses. Future generations will not even be able to say that.

Michael Berenbaum is a Holocaust scholar and former project director of the U.S. Holocaust Memorial Museum in Washington.

When the Last Survivor Is Gone