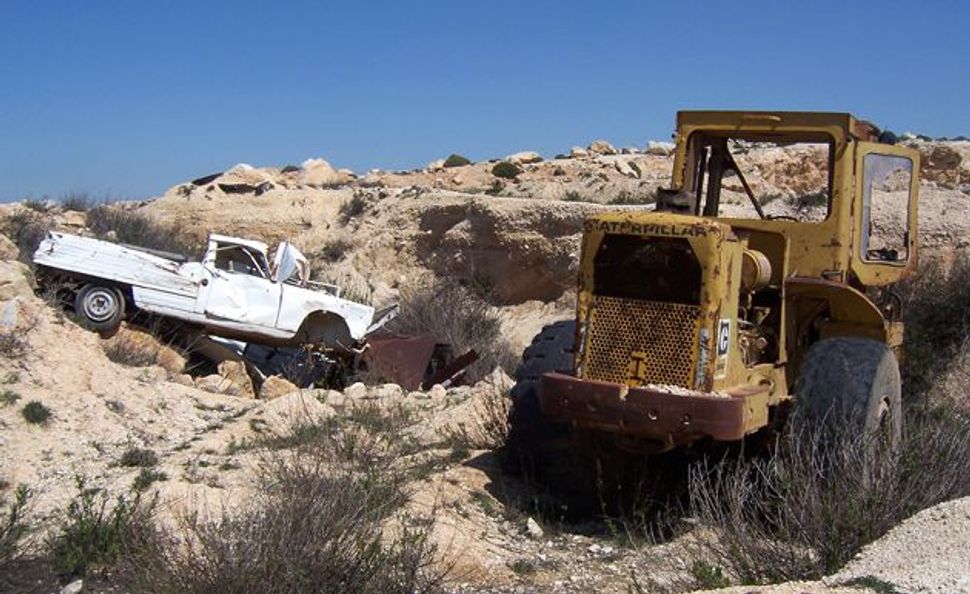 Shut Down: A West Bank quarry abandoned by its Palestinian operator, Aiser Ziadan, after Israel declined to renew his permit.

Complaints over Israel’s conduct on Palestinian land are well-known. Less commonly heard, however, is the accusation that Israel is actually removing the land.

“How is it that they are taking our land to Israel?” asked Ibrahim Abder, a Palestinian man standing at a stone quarry near his home a few miles south of Bethlehem during an interview with the Forward.

Abder, a former quarry-operator, was referring to the fact that every day Israeli firms are quarrying natural resources in the occupied West Bank and taking them to Israel. It is estimated that 12 million tons, a fifth of the gravel used for building in Israel each year, comes from the West Bank.

This issue received some attention in the international media in early March when Yesh Din, an Israeli nongovernmental organization, petitioned Israel’s High Court to stop this practice, arguing that it contravenes the laws of occupation and international law, and constitutes “pillage.”

In fact, the issue of quarrying is even more charged than the petition and media reports have indicated. As far as many Palestinian quarry operators are concerned, Israel is not just bringing in firms from Israel that have no right to be there; it is also making their own ability to do business increasingly difficult.

“Israelis are allowed to quarry our resources though we’re often not allowed to get at our own resources,” a senior manager in one of the largest Bethlehem-area stone companies told the Forward.

For Israel’s new prime minister, Benjamin Netanyahu, who has offered Palestinians an “economic peace” — in lieu of his predecessors’ commitment to a two-state solution to the Israeli-Palestinian conflict — the hurdles Israel has imposed on Palestinian quarry operators may prove a key test.

According to Palestinian quarry operators, their problems began in the mid-1990s when Israel toughened its environmental regulations for quarrying in Israel proper. As a result, Israeli firms increased quarrying in Area C of the West Bank — a sector that remains under direct Israeli jurisdiction under the Oslo Accords — where regulations were looser. (Areas A and B fall under Palestinian jurisdiction.) Along with the arrival of the Israeli firms came a steady stream of closings of Area C Palestinian quarries.

Abder recalled quarrying on one particular patch of state owned land in Area C by longstanding arrangement with Israel. But he had to close this quarry in 1996 after the authorities failed to renew his license. He said that no reasons were given.

“How should a person feel who had 35 trucks going [to Israel] every day and now hardly has fuel to go in his car?” Abder said angrily at the site of the abandoned quarry.

Israel’s plans and policies, and the reasoning and justifications for its actions are unclear. Despite repeated requests from the Forward, the Civil Administration, the Israeli authority responsible for the West Bank, failed to respond to any of the questions submitted for this article.

Meanwhile, Meir Bar-El, head of the buildings material division of the Israel Manufacturers Association, said Palestinian and Israeli firms are “competing on a level playing field under the same rules and the same conditions.”

Abder left the stone business, but Aiser Ziadan who ran the neighboring stone quarry until it, too, closed in similar circumstances in 2000, managed to carry on trading. This is because his company also processes stone quarried elsewhere.

The company managed to bear the extra cost of purchasing raw materials instead of quarrying them itself. But the last couple of years have brought new challenges that chipped away further at profits.

Ziadan, like many in the Palestinian stone business, complains that taking goods to Israel, once a relatively simple procedure, has become exceedingly complex, with growing and often unpredictable restrictions at checkpoints and an increasing number of bureaucratic demands.

Just a few months ago he used to take three truckloads of stone a day to Israel, but he is now finding it nearly impossible to get more than one through. “We were working until 3 p.m.,” he said. Now, as a consequence, “We just work until 10 a.m.”

A spokesman for Nassar Stone, one of the largest quarry operators in the Bethlehem area, told the Forward that in the last year his firm’s transportation costs have doubled. He said that in the last two years profits have fallen by around a third as a result of the growing complexity of getting goods to Israel.

There is a tunnel to Israel one mile from his plant, the Nassar Stone official noted. But his firm is only allowed to use it for goods for the domestic Israeli market. Goods for export must be driven 30 miles to a different checkpoint.

Several stone merchants told the Forward that in the last two months Israel has introduced more restrictions. These apparently include only letting Palestinian stone trucks through between 11 a.m. and 5 p.m. This means that there is only time for a single truck to make one drop to Israel a day instead of two.

Other new restrictions cited by stone merchants include a 75-per-day limit on Palestinian stone trucks crossing from the Bethlehem area to Israel. In many cases, they say, the authorities also insist on “back-to-back” loading. This means that instead of allowing an Israeli truck to go into the West Bank, collect goods and take them back to Israel, Palestinians must transport them in a Palestinian truck to a checkpoint and then move them onto an Israeli truck. This procedure is time-consuming and costly.

“As this is going on, Israeli firms are allowed free movement whenever they want, which frustrates us,” the manager of one large stone firm said. He declined to be named because he is lobbying Israel to change the situation.

He said that big companies like his have the skills and manpower to deal with the bureaucracy and profit margins that can bear the extra expenses of Israel’s increasing regulations. But a number of smaller firms have closed in recent months, he said.

Stone merchants are watching with interest — and more than a little skepticism — to see whether Netanyahu’s “economic peace” policy will affect the situation. “That’s what he’s saying, that he will help the Palestinian economy — we hope that he will do this,” said the stone company representative.

Those with an interest in the subject have various theories on why Israel acts as it does.

The Palestinian stone merchant who has been lobbying Israel on the issue said: “[Israel] does not have an organized system — just random decisions here and there” — decisions he views as part of a general habit of “collectively punishing” Palestinians.

Jad Isaac, a Palestinian expert on natural resources in the West Bank who directs the Applied Research Institute-Jerusalem, told the Forward he had no evidence to suggest that anything but heightened security standards was behind the slowing of passage for Palestinian materials.

But Yesh Din, the organization petitioning the High Court on Israeli quarrying in the West Bank, views the complaints of Palestinian quarries as the flip side of Israel allowing its own quarry firms into the area. Israel’s “dispossession” of Palestinians “starts always with the denial of the rights of the Palestinians and it continues with allocating the same denied rights to Israeli hands,” claimed Yesh Din fieldworker Dror Etkes.