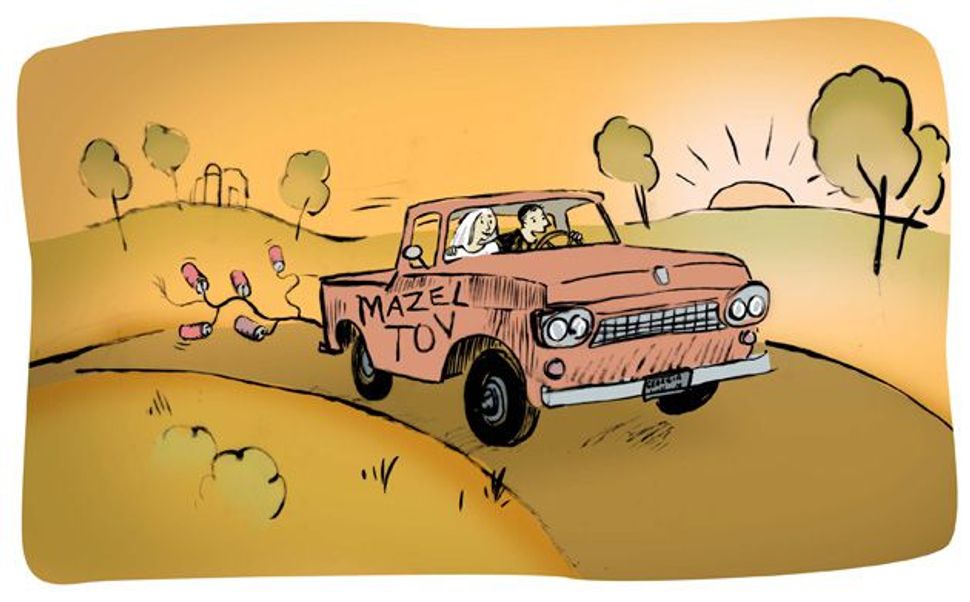 I was 5 years old when I realized that I was a freak show. In Macon, Ga., good ole boys go huntin’, muddin’ and beer guzzlin’. Peroxide blondes drive pick-up trucks with gun racks. Prayer kicks off sporting events. A Jewish girl is like a werewolf-midget contortionist.

My mother always dreamed I’d be married in Macon. Ben and I had been engaged for barely an hour when the subtle lobbying began. I had migrated to New York City, where I was spoiled by choices. Options for a Jewish wedding in the buckle of the Bible Belt were few.

Wedding planning with your Jewish mother is like a tennis match — assuming we’re both rabidly good at tennis. Imagine the fuzzy ball is guilt. We drilled it back and forth, grunting, spit flying, until we were teary and exhausted.

Choosing a date that didn’t conflict with the University of Georgia’s football schedule (really, people don’t come) nixed late summer, early winter and all of fall. Summer months below the Mason-Dixon can be brutally humid. Not wanting to subject our guests to this (and because the bride and groom are admittedly both sweaters), we chose April, giving us a scant four months to plan.

Team Wedding was Mom, headquartered in Macon, and Ben and I, who telecommuted from our 300-square-foot Manhattan studio. The freshly engaged couple had never set foot in a synagogue together, and I wasn’t sure how “Jewish” I wanted our wedding to be. My life as a Jewish 20-something meant eating bagels on weekends and popping into a High Holy Day service once a year. I had hoped to focus on our union rather than the religious context. Some of the conservative customs seemed stodgy and chauvinistic, but my nervousness about an outdoor ceremony’s unpredictable weather conditions outweighed my resistance to getting hitched in a synagogue.

I was proud that we were going to be married by a lesbian Conservative rabbi, the first to be out in her rabbinical school and still graduate, and I figured she would be flexible. I bought the first dress I tried on — dreamy strapless silk chiffon. Then the rabbi told me she forbids bare shoulders on the bimah. Initially opposed to being wrapped up like a birthday present, I began my quest for more fabric.

Macon lacks a Judaica store, as you might imagine, so this happy couple spent every weekend hunting down traditional Jewish wedding pieces in Manhattan. West Side Judaica, an uptown Wal-Mart of religious tchotchkes, became our second home. We fussed and fretted over our official marriage contract, the ketubah, which is signed during the ceremony and then hung as art in the home. We fervidly searched for, but couldn’t find, a ready-made version with design and language that we liked. In a frustrated and quixotic moment, we decided to make one ourselves. Ben and I tested paper and pens, consulted with the rabbi, who translated our personalized vows into Hebrew, and collaborated with Schlomo, the ketubah guru, who worked with a calligrapher to put it all together. Our dealings were plucked straight from “Seinfeld.” Schlomo’s mother answered the phone: “Hello!? Who? You want to talk to Schloymee?” And conversations with Schlomo were like trying to reason with a mad parrot: “We’ll bring you the acid-free paper, the pens and the translation. We have to bring the finished ketubah to Georgia.”

“You’ll bring me the acid-free paper?”

“The paper and the pens?”

“Bring me the translation before this can go to Georgia! And don’t forget the paper and pens!”

We nicknamed our pet project “The Ketubah of Mass Destruction,” because we were certain it was going to kill us.

The KMD flew to Georgia in a heavy-duty plastic scroll that looked rather weaponlike. You should have seen the suspicious glances we attracted from airline attendants and from security guards who carried tasers.

Days before the wedding, we learned that Ben’s father’s Hebrew name had been written incorrectly, as “Pinchas” instead of “Pesach.” To us non-Hebrew readers, Pinchas sounded like a part of the male anatomy. Every time Ben’s name appeared in the *ketubah *(which was quite frequently), he was referred to as “son of Pinchas” instead of “son of Pesach,” making our marriage document officially void, though incredibly hysterical.

Another point of contention was the ceremony music. I had chosen a Brahms concerto for the processional. My mother wanted traditional, mournful, Jewish music. The aching violins sounded despondent, like music from “Schindler’s List.” The tennis match of guilt continued. Judaism was inserting itself into my wedding in more ways than I could count, and time was ticking away.

Despite all the stress, commotion and moments when it almost didn’t happen, my big Southern, Jewish wedding was a wonderfully happy occasion. The stained-glass windows, which I’d hardly noticed as a child, soaked up early evening light. Seeded eucalyptus and pale-blue blossoms transformed the familiar dark wood of the sanctuary. Standing under the hupah with my first Jewish boyfriend, surrounded by friends and family in the synagogue of my youth, old and new mixed like never before. Ben and I read our vows, slipped on rings, and beamed at throngs of guests chanting “mazel tov.” Everyone gathered for a reception in front of the house where I grew up. The newlyweds rode there in a gleaming white Ford F1-50 truck.

Tomato sandwiches and thick whiskey drinks were passed. We ate, drank and reveled late into the night. My Catholic cousins donned yarmulkes, and the sports fans started football chants mid-dance floor. Guests danced a mean hora. This mishmashed wedding was the perfect culmination of the old and new me.

Sure, I’ve misprized and mocked my native South since I left it, but it’s all part of the love I have for this bizarre place where kindness and ignorance can play tug of war, where strangers are embraced by a room full of smiles, the Civil War is re-enacted and bumper stickers read, “American by Birth, Southern by the Grace of God.”