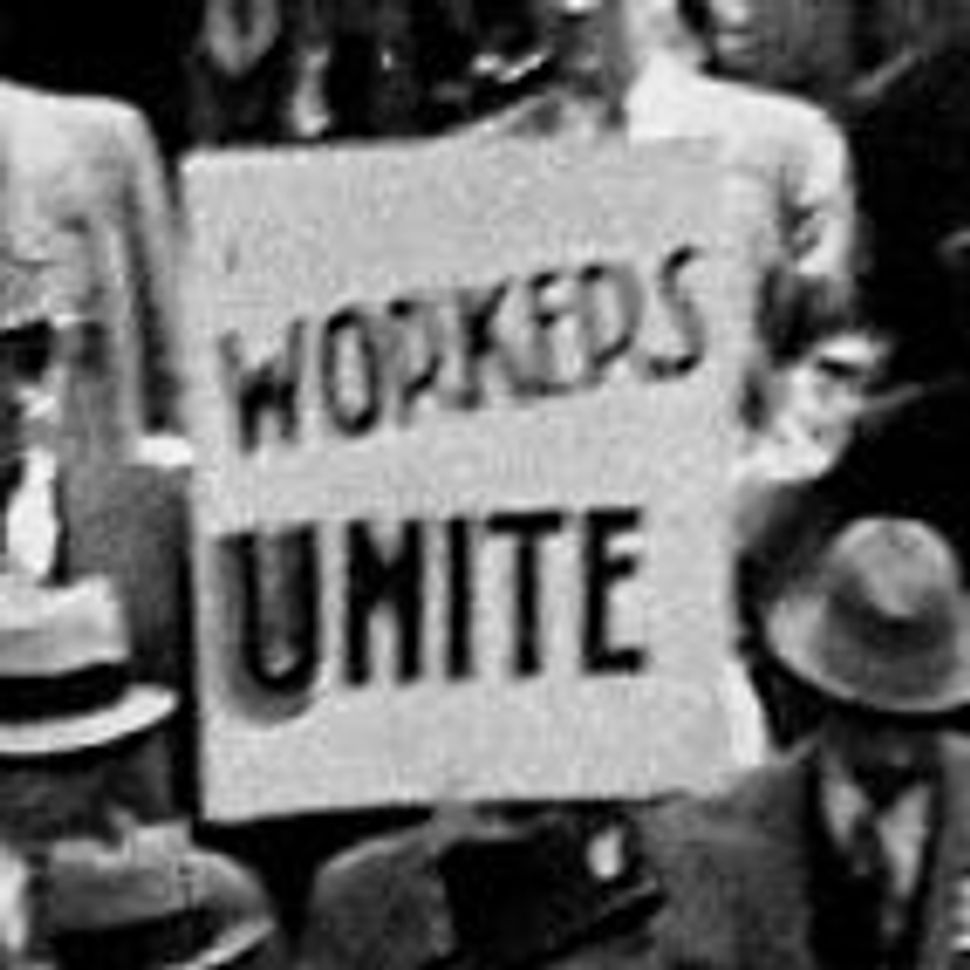 The annual commemoration of the infamous Triangle Shirtwaist fire has long been a chance for the leaders of the old Jewish garment unions to come out and memorialize the Jewish roots of the labor movement.

The commemoration went ahead as scheduled on March 27 — with the names of the 147 fire victims being read off to the tolling of a fire bell — but this year, for the first time, the Jewish head of the historically Jewish garment workers union was missing. Bruce Raynor, the general president of Unite Here, was too busy dealing with the dissolution of his union to make it to the site of the fire near Washington Square Park in Manhattan.

In the weeks before the event, Raynor had been pushing for the breakup of a marriage gone bad between his old labor group, the Union of Needletrades, Industrial and Textile Employees (UNITE), and the Hotel Employees and Restaurant Employees International Union (HERE).

In a way, Raynor’s absence from the Triangle fire commemoration was fitting, because it appears that one result of the infighting is that for the first time in history, the head of the venerable garment workers union will not be Jewish. With the breakup, a new union, known as Workers United, is set to carry on the banner of the garment unions under the presidency of Edgar Romney, an African American.

If the breakup is finalized, Unite Here will continue to represent restaurant and hotel workers.

This will not end the role of Jews in the union’s leadership. Workers United has voted to become a constituent group of the Service Employees International Union, led by the most famous Jewish labor leader of today — Andy Stern. While union insiders say that Raynor is likely to receive a top position within the SEIU, many labor watchers say that the ascension of Romney is a welcome change in a union where the membership is now predominantly black, Latino and Asian.

“There’s something to be said for the leaders reflecting the actual members,” said Rabbi Michael Feinberg, head of the Greater New York Labor-Religion Coalition, and a speaker at the Triangle fire event. “That, to me, is a natural succession.”

While Unite Here is steeped in labor lore, the current fighting is a product of very modern trends in the labor movement. Raynor and John Wilhelm, head of HERE, are both Ivy League-educated organizers renowned for leading a renewed commitment to organizing workers.

“They both changed the playing field for unions in this country,” said Kate Bronfenbrenner, a professor at Cornell University’s School of Industrial and Labor Relations.

Since merging, the two leaders have battled over the best strategy for bringing new members into their merged union.

UNITE is the lineal descendant of the legendary, heavily Jewish apparel unions, the International Ladies Garment Workers Union and the Amalgamated Clothing and Textile Workers Union, which merged in 1995. Both of these unions gained momentum from the Triangle fire in 1911, when 147 female workers — mostly Jewish and Italian immigrants — perished due to locked exits that blocked their escape from a cramped sweatshop.

The marriage between UNITE and HERE in 2004 was an effort to complement their respective strengths, fusing UNITE’s considerable financial assets but relatively lower membership base with cash-starved HERE’s growing membership rolls. Together, they brought together some 450,000 active members. But their divergent cultures — UNITE, a strongly centralized, top-down organization, and HERE, a highly decentralized group with strong rank-and-file input — did not prove easy to reconcile.

The divorce has not been amicable. Wilhelm’s camp sued Workers United in an effort to keep it from peeling off, and then to keep it from taking assets that previously had been a part of the joint union.

UNITE brought an unusually hefty dowry to the 2004 merger, thanks, in large part, to the vision upheld by the two predecessor unions from which it was formed. In 1922, that vision — a commitment to the social, cultural and financial empowerment of its members — led an earlier incarnation of the men’s garment union to form what is now the only union-owned bank in the United States. Amalgamated Bank has been a major point of contention in the division of Unite Here.

The garment unions have long dealt with the issue of a demographic disjoint between their membership and leadership. While the ILGWU had a predominantly female membership, it never had a female leader. After World War II, as the Jewish membership in the garment unions fell off, the unions were accused of not allowing the new black and Latino members into top leadership positions.

“These Jewish men never gave up the top ranks of the union, even as their membership demographics stopped being Jewish,” said Daniel Katz, a labor historian at Empire State College.

The Triangle fire event reflected the new demographics, with the longest speech coming from a Hispanic laundry worker who was cheered on by Asian workers waving signs for Workers United. Ed Vargas, who filled in for Raynor at the event, said that whatever the leadership, at least some of the old Jewish traditions will persist.

“What Europeans brought to the United States was a style of community organization that a lot of the labor movement built its foundations on,” Vargas said. “That is a foundation and a legacy that came from a lot of Jewish folks and that is still a part of what we do today.”

To read a story from our archives that features Bruce Raynor discussing the Jewish legacy of the union that represents garment workers, click here.

Share your own experiences with organized labor or your opinions about the Employee Free Choice Act at www.forward.com or by emailing [email protected].