Holocaust Survivor’s Past Drove Her To Help Detainees 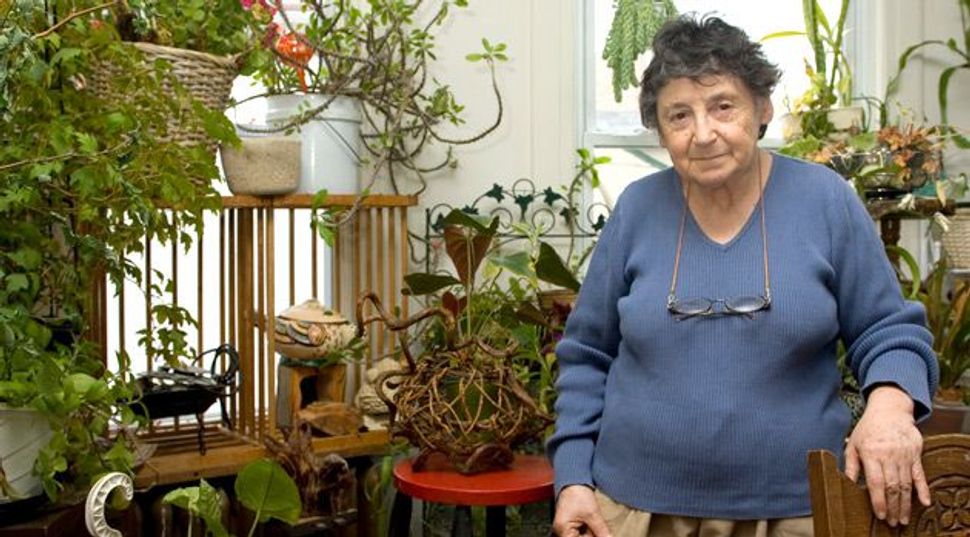 Hometown Hero: Jean Blum, a 73-year-old Holocaust survivor, collected and sent accounts of the death of a jailed Pakistani New Yorker to the government. Image by Ari Jankelowitz

Almost no one noticed or cared when Ahmad Tanveer, a 43-year-old Pakistani New Yorker, died of an apparent heart attack while being held in jail, awaiting deportation.

Tanveer’s name did not appear on any list of immigration detainees who had died in custody. He never came up in testimony that the Department of Homeland Security gave to Congress.

His death in 2005, in Freehold, N.J.’s Monmouth County jail, might have gone unremembered and unremarked forever if not for the efforts of a Holocaust survivor who was determined to fight for the rights of immigration detainees.

Jean Blum, a 73-year-old retired teacher living in Paterson, N.J., corresponded with and took desperate collect phone calls from illegal immigrants who were being detained at her local jail to await deportation. Blum responded to their pleas by nagging local officials to improve the prisoners’ living conditions. When she heard of Tanveer’s death, she collected accounts from witnesses and sent her evidence to the government.

She never heard back. Sometimes she wondered whether she was making a difference. Eventually, she burned out and took a break from advocacy to focus on her own health. But last month, the paper trail Blum created helped lead lawyers of the American Civil Liberties Union, as well as a New York Times reporter, to uncover the death of Tanveer and to demand answers from U.S. Immigration and Customs Enforcement, a division of DHS.

Half a million noncitizens were held in jails and prisons last year while the government tried to deport them, The New York Times’ Nina Bernstein reported, and the system’s secrecy and lack of accountability allowed Tanveer’s death — and maybe the deaths of others — to fall through the cracks. Blum’s motivation for getting involved was simple: When she looked at immigrant detainees, she saw herself. As a child, she fled Poland with her family in 1939 to escape the Nazis. The family bounced around Europe before escaping to the United States in 1946.

“We were in that situation, my family and I,” Blum said. “It was absolutely appalling [that] this was happening in my country, to people who came for the same reason I came here — people who were hardworking and absolutely innocent of any crime.”

Asked how she got involved with the detainees, Blum starts at the very beginning of her story: She was born in Poland in 1935, the daughter of a prominent Jewish engineer. When Polish government leaders went into exile in Romania, they took along her family — but then left them behind when the government in exile moved to England. For Blum’s family, things went from bad to worse when a pickpocket stole all of Blum’s father’s money.

Her parents were secular Jews, but the more observant Romanian Jewish community took in the family, Blum said. Many times, her father told her the story of their flight from Poland, and he never forgot the kindness the Romanian Jews showed them.

“My father always said that people helped him survive,” Blum said. “So, it’s kind of like, what comes around, goes around.”

Her father spent days on line at foreign embassies, but no country would admit Jews. Finally, he joined the French army in exchange for that country accepting his wife and daughter. When France surrendered, Blum’s father was taken prisoner while Blum and her mother went into hiding. Once again, they survived thanks to strangers, this time the French Underground.

Her father’s captors followed the Geneva Conventions, and he was treated well as a prisoner of war. Years later, in America, Blum was struck by the fact that the Germans treated her Jewish father better than how she thought her own country was treating illegal immigrant detainees.

“I always said America is such a wonderful place,” Blum said. But while working with the detainees, she was shocked by their dirty, violent living conditions, lack of proper food and substandard medical care in jail. “This is my country, and I am ashamed,” she said.

After she and her family immigrated to the United States in 1946, Blum didn’t seem destined for a life of activism. She enjoyed a happy childhood in New York, grew up and got married, had two children and then, in the 1970s, got divorced.

There were hints of radical leanings: Blum was fired from a teaching job because, she said, her ideas of how children really learned did not comply with the school board’s notions of how children should be taught. She ran a bookstore, worked in sales, raised her children and generally didn’t worry too much about what her government was up to.

Then, as she puts it, “along came Bush.”

What she saw as the trampling of civil rights after the September 11 terrorist attacks got her politically engaged. She joined an Impeach Bush group, and joined another civil rights group working with detainees. She chafed under the civil rights group’s hierarchy and clashed with one leader whom she calls a “queen bee type.” But when the group heard reports that four detainees had been beaten in the Monmouth County Jail, Blum volunteered to go talk to the men.

The detainees poured out their hearts to Blum. She started getting letters and calls from them and communicating messages to their family members in New York. She helped two female detainees get medical care: One wasn’t getting the medication she needed, and another had fallen and injured her back so badly that she couldn’t walk.

Blum got to know the local government officials in charge of the detainees, and used what she calls her “grandma look” to win concessions.

“There’s a big advantage in being old,” she said. “I can look people in the eye and just say, ‘Now look….’ I was able to get them things they wouldn’t otherwise get.”

When detainees told her of Tanveer’s death, she gathered signed affidavits from witnesses who described how the detainee had complained of chest pains and suffered without medical attention for hours before dying. Those documents were later unearthed by the ACLU and The New York Times, which finally got the government to confirm Tanveer’s death.

But the collect calls put stress on Blum’s limited budget, and the tales of woe took an emotional toll. She had a falling-out with the other members of the detainees’ rights group, who accused her of cozying up to local officials.

“Some folks may be put off by her because she is so intelligent. She’s very intense,” said her friend Joanie Palmino, who met Blum through the Impeach Bush group. When Blum sets her mind to a task, Palmino said, she doesn’t give up.

“Jeanie is one of these people who is very focused. What keeps her going is caring about people,” Palmino said. “She’s 10 years older than me, and I don’t know where she gets her energy.”

Eventually, though, Blum stopped working with detainees, although some continue to send her letters. She was moved by the reaction to The New York Times’ story in April: Many readers offered her money to continue her work, and she had to tell them she wasn’t doing it anymore. She still feels guilty about walking away.

“I feel that I didn’t finish it, that I abandoned them,” she said. But, haltingly, she says she’s glad that she at least tried to do something.

“When somebody stumbles in front of me, needing help, I can’t just turn my back,” Blum said. “Isn’t that an important part of Judaism?”

Holocaust Survivor’s Past Drove Her To Help Detainees