Music of the Mind 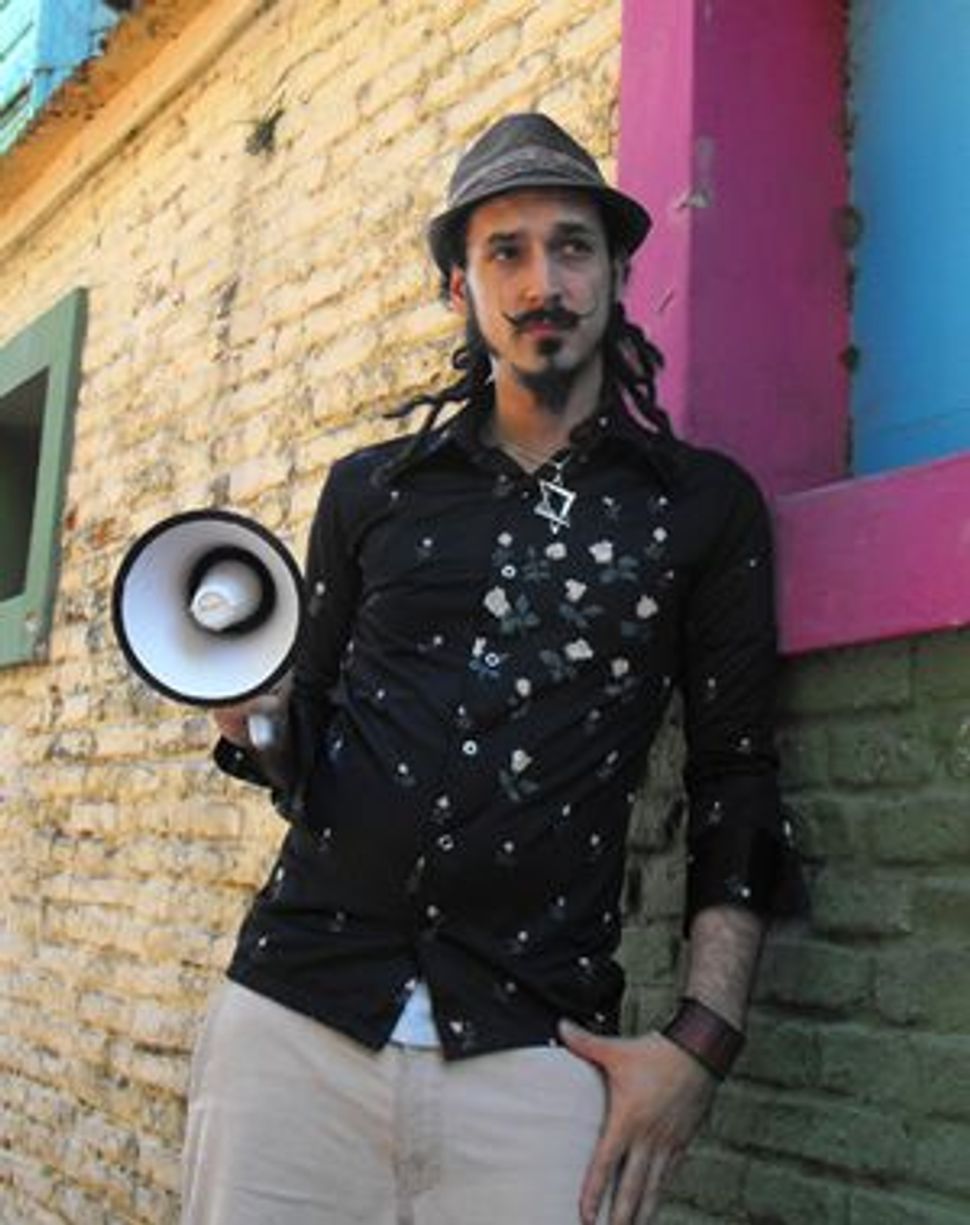 Hailing from the land of Tango in Buenos Aires, Simja Dujov writes music that resembles almost anything other than that classic genre. Known as “the Jewish Manu Chao,” he has a sound that is ironic and humorous rather than wistful and melancholy, rhythmic and driving as opposed to nonpercussive. Dujov’s music is uniquely of its time and place, avoiding the character of Tango, which longs for a Europe of the past. A fusion of Cumbia (a Colombian urban dance music) and reggaeton, with traces of hip hop and klezmer, Dujov’s heady brew could be possible only in South America. The artist is currently at work on his latest album, set for release in September, and his back story is almost as interesting as the music itself. 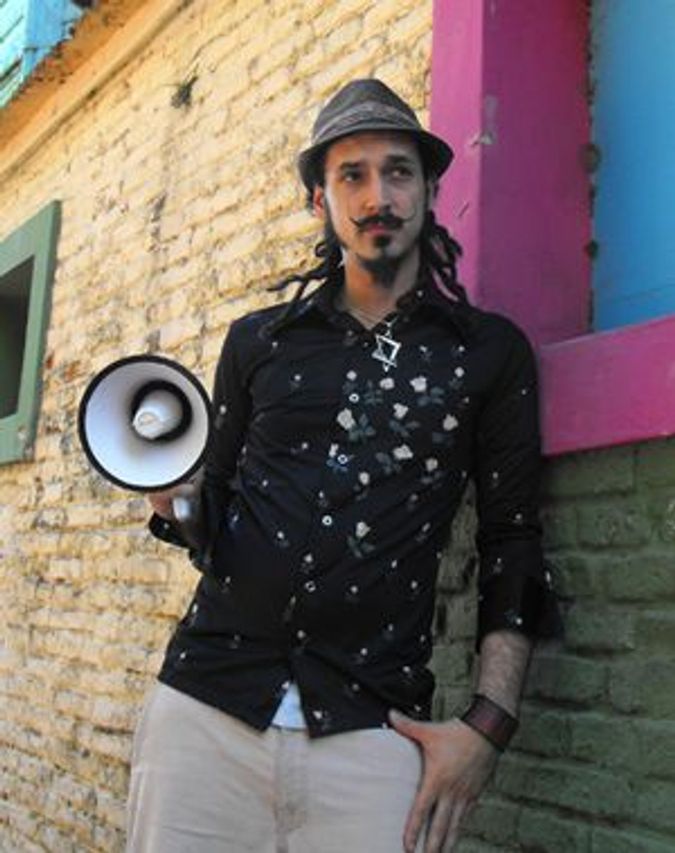 Dujov (his full name is pronounced Sim-cha Du-chov) was born Gabriel Dujovne in Córdoba, Argentina, the nation’s second-largest city, with almost 2 million inhabitants and about 15,000 Jews. Dujov, 26, is the grandson of one of many Ukrainian Jews who put down roots in the agricultural settlements of the country’s Entre Rios region as part of Baron Maurice de Hirsch’s renewal project that competed with Zionist immigration. Dujov took the stage name Simja Dujov because it means “happy soul” in Hebrew and Russian, respectively.

When he was 18, at the encouragement of his music professor, Dujov joined Córdoba’s Yiddish choir, Halevai, and that was the beginning of his career as a performer. Discovering Argentine klezmer legend Marcello MoguIlevsky, though, is what really inspired him. After hearing MoguIlevsky play live, Dujov wandered the streets, wondering, “How can they live without listening to this?”

In 2005, Dujov formed the Klezmer Strudel Band in Córdoba, the first klezmer ensemble in Argentina outside of Buenos Aires. The group earned a regular gig at the city’s Jewish community house and received press coverage and invitations throughout the region. Yet, Dujov quickly grew tired of the traditional klezmer scene. “Playing at weddings was not fun; they treat you as part of the help,” he said. “Klezmer in Argentina is musically more non-Jewish. I don’t feel represented or a part of it.” In fact, most of the 10 or so klezmer bands based in Buenos Aires are largely made up of non-Jews who function commercially for Jewish events. Dujov’s brother, Alejandro, an adviser to the American Jewish Committee, explained the phenomenon by adding: “It’s positive in that it’s Jewish music beyond the ghetto. On the other hand, it’s a sign that many Jews are not interested in klezmer.”

Dujov, whose klezmer band had performed in meticulously re-created prewar shtetl-like garments, aspired to expand his musical horizons. Not wanting to fall into a commercial or academic trap, Dujov connected with the YOK Project, a Jewish not-for-profit organization based in Buenos Aires that professes to reach “the non-institutionalized Jew outside of the Jewish bubble.” For a while, YOK championed Dujov’s work, and he played in a number of street fairs under the project’s auspices. But he said, “They were not transgressive enough for me. Jewish musical interaction in Latin America is minimal; the Jewish community chooses security over life.”

Dujov focused his attentions on writing music for theater productions and on his job as a radio DJ, while working to create a new sound. He recorded two albums based on Latin music: “Em Outras Palavras,” released in Brazil in 2006, and “Del Lado Equivocado,” released in Argentina last year. He turned to various Latin influences and rhythms that have gained popularity in Argentina in recent years.

Dujov originally gravitated toward Cumbia and reggaeton that were reinterpreted through European electronic formats. In his global blend of klezmer, ska and reggae, along with traces of Leonard Cohen and New York Gypsy-punk band Gogol Bordello, Dujov does not merely show points of contact — he actually mixes everything together, with seemingly effortless flair. Beyond the stage, Dujov lives his fusion. His dreadlocks attest to linkages between Rastafarianism and Zionism. He’s a conceptualist but not an instrumentalist, and his eight-member band includes electronic and acoustic instruments, such as the tuba and accordion.

Dujov will tour Europe this summer, and he expects to book shows this fall in New York City, once his forthcoming album is finished. He is currently in talks with the manager of Matisyahu and with JDub Records to secure American distribution for his music.

“I am always discovering who I am, and I feel comfortable serving as a bridge between styles and audiences,” Dujov said. Still perfecting his new sound, Dujov uses music as an extension of his therapy. “If you *don’t *do psychoanalysis here, you’re crazy,” he said. His self-designed motto, which is included in one of his most popular songs, “To Stay or To Go,” reads like spiritual advice for those living in the modern world:

a alegria no es un mandato (happiness is not a commandment)

a tristeza no es un castigo (sadness is not a punishment).

Simja Dujov’s “To Stay or To Go” can be heard below:

Adam J. Sacks is a writer living in New York.

Music of the Mind