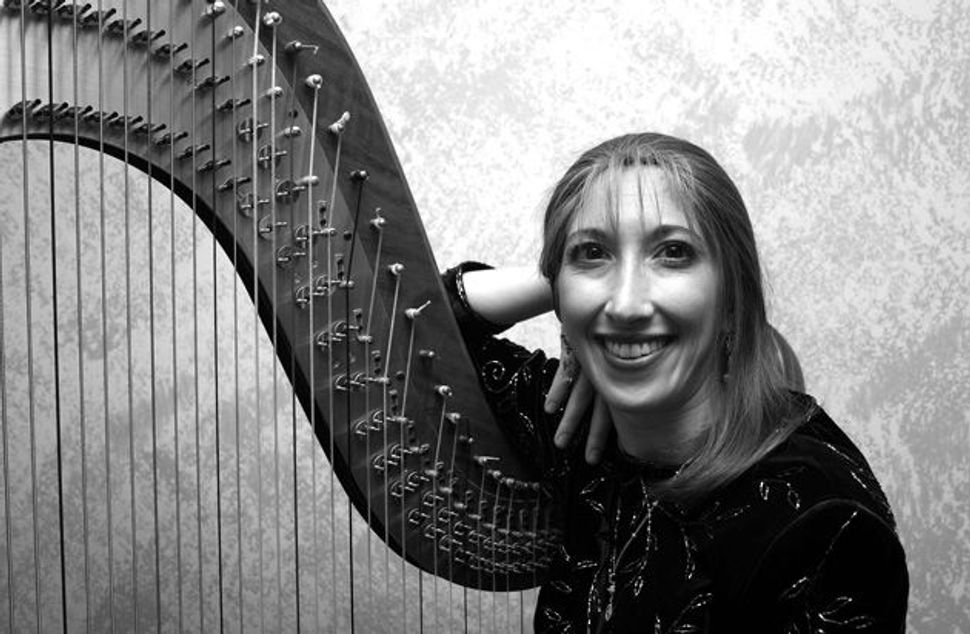 A few hours past sundown on a recent Saturday evening, Rivka Nahari, 31, took to the stage. Her slight frame draped in all black, and her wig swept back with a clip, she sang an aria from “Romeo and Juliet” while accompanying herself on the piano. The audience, which consisted of 50 Orthodox women and girls who had been listening to musical performances more suited to “American Idol” than to the Met, vacillated between awe and confusion at the French lyrics and the power of Nahari’s voice, which reverberated from one end of the gym to the other.

Perhaps the Shorefront Y’s gymnasium, located on Coney Island Avenue in the Brighton Beach section of Brooklyn, was not the best venue to host the “Women Out Loud!” women-only open mic, but Nahari seemed to enjoy herself. “My joy is in performing,” she said, “not teaching.”

But teaching has become an important part of Nahari’s career as owner and artistic director of the Brooklyn Jewish Dance Institute. One of her goals this past November, when she opened her studio in the basement of her Flatbush home, was to increase the level of dance training available to *frum *women. Nahari hopes to find a few gifted and dedicated female dancers and create a professional company so that the girls won’t have to go outside the community for an artistic education.

Nahari, who has three daughters and a son, is well suited to the task, perhaps, most notably, because of the years she spent studying dance in the outside world. Growing up in Las Vegas in a nonobservant home, she studied ballet as a young girl at the Academy of Nevada Ballet Theatre. Nahari probably still would be in the Nevada desert, performing with a professional company, had she not discovered the Chabad Lubavitch movement at age 14.

Her parents were opposed to her venturing into the Chabad House. Nahari said her mother told her “I wasn’t going to be accepted, because I was a girl. They told me they’re dirty people. Anything to dissuade me from going. And my first impression was how clean the place was,” she recalled with a laugh.

Nahari says that her attraction to Orthodox Judaism stems from the fact that she’s a rules kind of girl. She credits the Chabad rabbi for not pressuring her to give up her artistic pursuits (which included harp, flute, piano and voice), even as he taught her about the very modesty laws that would prohibit their continuation in a public way. He found halachic loopholes for the young Nahari so that she would not abandon her efforts to become Orthodox. For a while, she let herself slide down the chutes. But after spending two years studying at the Lubavitch Bais Rivkah Seminary in Brooklyn and at the Mannes College of Music in Manhattan — a time that she describes as “the best balance I ever achieved” between her religious and artistic lives — she gave it all up. Her fiancé, who hailed from Israel’s small town Bnei Brak and was studying to be a rabbi, didn’t approve of her public performances.

Nahari spent the next several years devoted exclusively to raising a family. It was only recently that she felt the urge to return to the stage. “Dance and music are my way of expressing myself,” she said, with equal parts pride and guilt.

Nahari acknowledges that she faces an uphill battle in the *frum *community, where people struggle to identify the differences between the various kinds of dance, much less perform those dances. “When I first opened the studio, I got a bunch of people calling, asking if we had modern classes,” she said. Nahari was puzzled by all the inquiries she was getting about an abstract dance form, so she questioned the callers further. “Turns out they were looking for a hip-hop class. They had no idea what it was called,” she said.

Hip hop is just one of the several dance classes Nahari offers to children and adults. Others include ballet, jazz and flamenco. But the introduction of the urban dance form presented a challenge to the studio’s motto — “Providing quality dance training… in a tzniusdik [chaste] way. Nahari’s hip hop, however, is not the kind you’d recognize from MTV. Gone are sexually suggestive moves and even the lyrics. She chooses instrumental pieces for most hip-hop classes.

For some, the modifications aren’t enough. Some rabbis have objected to Nahari’s efforts. “They didn’t like that I was bringing this treyf thing into the community. One said that if any of the girls in his school were caught in the studio, they would get kicked out.”

Nahari understands the criticism. She has daughters of her own and though she wants them to be able to express themselves physically and creatively, she was at first ambivalent about enrolling them in her studio’s classes. What if they took to dance the way she had? Even if her company and studio are huge successes, there is no way Nahari can match the opportunities available on the outside. “I would have a hard time supporting her,” Nahari admitted, almost incredulously, when asked how she would react if one of her daughters, after years of training, decided to pursue a career in the greater dance community.

And yet, she carries on the venture with the blessing of a local rabbi who has granted the studio a seal of approval. Others have chimed in with their approbation. “Some people call me and thank me from the bottom of their hearts for giving their girls this outlet,” Nahari said.

But perhaps the biggest beneficiary has been Nahari, who after years of self-denial has been able to fulfill herself artistically while maintaining her religiosity. “The studio is the balance I’ve been searching for since college,” she said. Of course, that kind of balance is a bit easier for someone already at ease on her toes.

Dvora Meyers is a freelance writer based in New York.