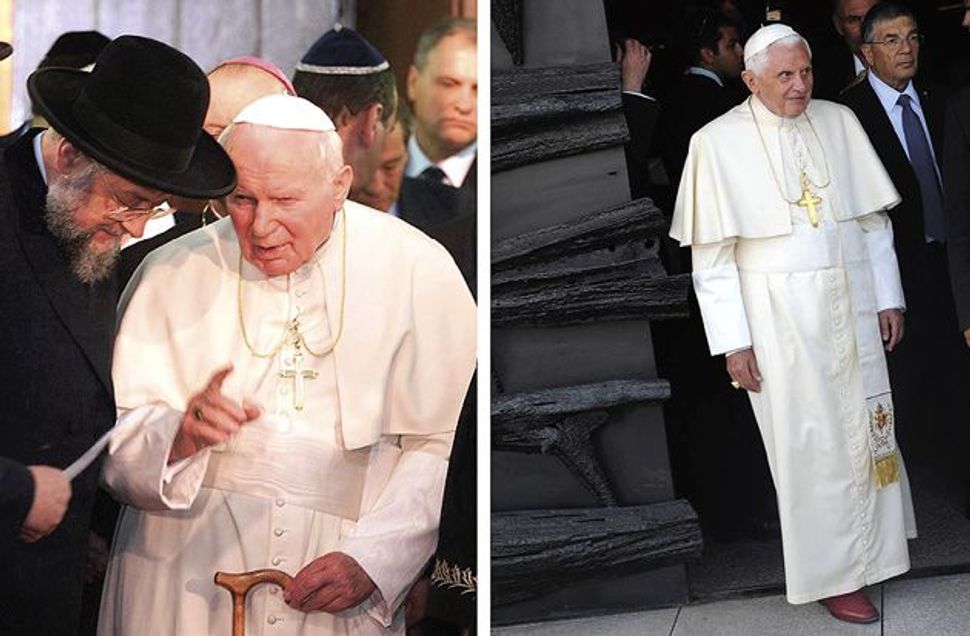 A Tale of Two Pontiffs: Popes John Paul II (left) and Benedict XVI both spoke at Yad Vashem, but where the former won plaudits, the latter has been panned. Image by Getty Images

Lau, a survivor of Buchenwald who serves as the chairman of the Yad Vashem Council, lamented that while Benedict’s predecessor, Pope John Paul II, offered a moving personal expression of grief when he visited the museum nine years ago, the current pope only offered the Catholic Church’s “deep compassion” for those killed in the Holocaust.

Lau also pointed out that Benedict, who is German by birth and was a member of the Hitler Youth, did not mention the Germans or Nazis as those who carried out the genocide, and used the word “killed” instead of “murdered” to describe how the Jews died. And, he added, Pope Benedict never said that 6 million Jews were killed, saying only “millions.”

Vatican spokesman Federico Lombardi responded that the pope has denounced the Nazis and spoken of his German heritage in previous speeches — including a visit he made to the Auschwitz death camp — and used the 6 million figure during his remarks upon arriving in Israel.

From a JTA report

Below are the texts of the addresses the two pontiffs made at Yad Vashem, Benedict XVI on May 11, and John Paul II on March 23, 2000.

‘I have become like a broken vessel; I hear the whispering of many as they plot to take my life.’

The words of the ancient Psalm, rise from our hearts: “I have become like a broken vessel. I hear the whispering of many — terror on every side —as they scheme together against me, as they plot to take my life. But I trust in you, O Lord: I say, ‘you are my God’” [Psalms 31:13-15].

In this place of memories, the mind and heart and soul feel an extreme need for silence. Silence in which to remember. Silence in which to try to make some sense of the memories which come flooding back. Silence because there are no words strong enough to deplore the terrible tragedy of the Shoah.

My own personal memories are of all that happened when the Nazis occupied Poland during the war. I remember my Jewish friends and neighbors, some of whom perished, while others survived. I have come to Yad Vashem to pay homage to the millions of Jewish people who, stripped of everything, especially of human dignity, were murdered in the Holocaust. More than half a century has passed, but the memories remain.

Here, as at Auschwitz and many other places in Europe, we are overcome by the echo of the heart-rending laments of so many. Men, women and children, cry out to us from the depths of the horror that they knew. How can we fail to heed their cry? No one can forget or ignore what happened. No one can diminish its scale.

How could man have such utter contempt for man? Because he had reached the point of contempt for God. Only a godless ideology could plan and carry out the extermination of a whole people.

The honor given to the “just Gentiles” by the state of Israel at Yad Vashem for having acted heroically to save Jews, sometimes to the point of giving their own lives, is a recognition that not even in the darkest hour is every light extinguished. That is why the Psalms and the entire Bible, though well aware of the human capacity for evil, also proclaim that evil will not have the last word.

Out of the depths of pain and sorrow, the believer’s heart cries out: “I trust in you, O Lord: ‘I say, you are my God’” [Psalms 31:14]. Jews and Christians share an immense spiritual patrimony, flowing from God’s self-revelation. Our religious teachings and our spiritual experience demand that we overcome evil with good. We remember, but not with any desire for vengeance or as an incentive to hatred. For us, to remember is to pray for peace and justice, and to commit ourselves to their cause. Only a world at peace, with justice for all, can avoid repeating the mistakes and terrible crimes of the past.

As Bishop of Rome and successor of the Apostle Peter, I assure the Jewish people that the Catholic Church, motivated by the Gospel law of truth and love, and by no political considerations, is deeply saddened by the hatred, acts of persecution and displays of antisemitism directed against the Jews by Christians at any time and in any place.

The church rejects racism in any form as a denial of the image of the Creator inherent in every human being.

In this place of solemn remembrance, I fervently pray that our sorrow for the tragedy which the Jewish people suffered in the 20th century will lead to a new relationship between Christians and Jews. Let us build a new future in which there will be no more anti-Jewish feeling among Christians or anti-Christian feeling among Jews, but rather the mutual respect required of those who adore the one Creator and Lord, and look to Abraham as our common father in faith.

The world must heed the warning that comes to us from the victims of the Holocaust, and from the testimony of the survivors. Here at Yad Vashem the memory lives on, and burns itself onto our souls. It makes us cry out: “I hear the whispering of many — terror on every side — but I trust in you, O Lord: I say, ‘You are my God’” [Psalms 31:13-15].

‘I will give in my house and within my walls a memorial and a name.’

“*I will give in my house and within my walls a memorial and a name … I will give them an everlasting name which shall not be cut off” *[Is 56:5].

This passage from the Book of the prophet Isaiah furnishes the two simple words which solemnly express the profound significance of this revered place: yad — “memorial”; shem — “name”. I have come to stand in silence before this monument, erected to honor the memory of the millions of Jews killed in the horrific tragedy of the Shoah. They lost their lives, but they will never lose their names: these are indelibly etched in the hearts of their loved ones, their surviving fellow prisoners, and all those determined never to allow such an atrocity to disgrace mankind again. Most of all, their names are forever fixed in the memory of Almighty God.

One can rob a neighbor of possessions, opportunity or freedom. One can weave an insidious web of lies to convince others that certain groups are undeserving of respect. Yet, try as one might, one can never take away the name of a fellow human being.

Sacred Scripture teaches us the importance of names in conferring upon someone a unique mission or a special gift. God called Abram “Abraham” because he was to become the “father of many nations” [Gen 17:5]. Jacob was called “Israel” because he had “contended with God and man and prevailed” [Gen 32:29]. The names enshrined in this hallowed monument will forever hold a sacred place among the countless descendants of Abraham. Like his, their faith was tested. Like Jacob, they were immersed in the struggle to discern the designs of the Almighty. May the names of these victims never perish! May their suffering never be denied, belittled or forgotten! And may all people of goodwill remain vigilant in rooting out from the heart of man anything that could lead to tragedies such as this!

The Catholic Church, committed to the teachings of Jesus and intent on imitating his love for all people, feels deep compassion for the victims remembered here. Similarly, she draws close to all those who today are subjected to persecution on account of race, color, condition of life or religion — their sufferings are hers, and hers is their hope for justice. As Bishop of Rome and Successor of the Apostle Peter, I reaffirm — like my predecessors — that the Church is committed to praying and working tirelessly to ensure that hatred will never reign in the hearts of men again. The God of Abraham, Isaac and Jacob is the God of peace [cf. Ps 85:9].

The Scriptures teach that it is our task to remind the world that this God lives, even though we sometimes find it difficult to grasp his mysterious and inscrutable ways. He has revealed himself and continues to work in human history. He alone governs the world with righteousness and judges all peoples with fairness [cf. Ps 9:9].

Gazing upon the faces reflected in the pool that lies in stillness within this memorial, one cannot help but recall how each of them bears a name. I can only imagine the joyful expectation of their parents as they anxiously awaited the birth of their children. What name shall we give this child? What is to become of him or her? Who could have imagined that they would be condemned to such a deplorable fate!

As we stand here in silence, their cry still echoes in our hearts. It is a cry raised against every act of injustice and violence. It is a perpetual reproach against the spilling of innocent blood. It is the cry of Abel rising from the earth to the Almighty. Professing our steadfast trust in God, we give voice to that cry using words from the Book of Lamentations which are full of significance for both Jews and Christians:

“The favors of the Lord are not exhausted, his mercies are not spent;

They are renewed each morning, so great is his faithfulness.

My portion is the Lord, says my soul; therefore will I hope in him.

Good is the Lord to the one who waits for him, to the soul that seeks him;