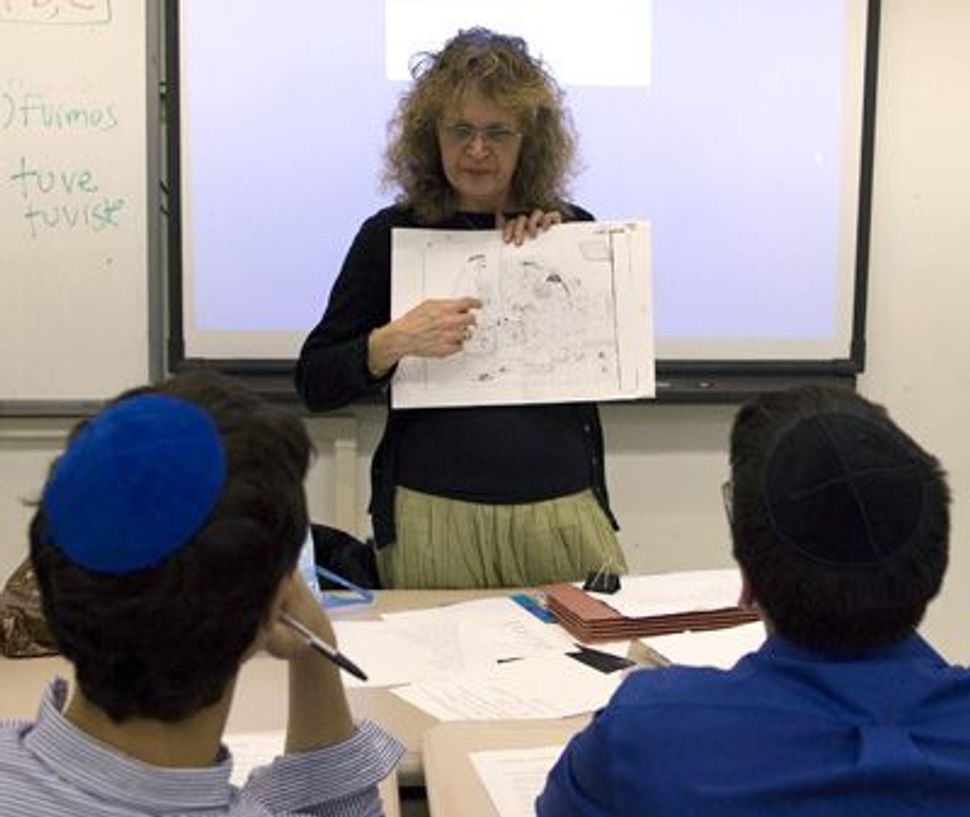 Language Club: Teacher Orit Nawrocki leads a session at an after-school club that focuses on learning Arabic. The club is at Ramaz, a modern Orthodox school in Manhattan. Image by Ariel Jankelowitz 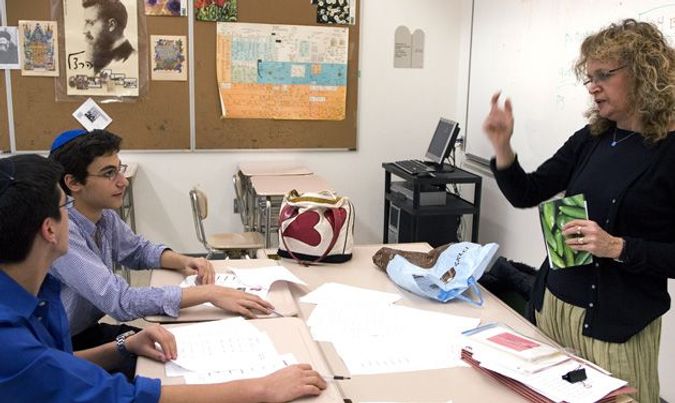 That IS how you say ?Hummus? in Arabic: Language instruction for the children of Abraham. Image by Ariel Jankelowitz

Outside their classroom window a beautiful spring afternoon is blooming, but a few students at Ramaz, a Modern Orthodox academy in Manhattan, have stayed after school for a foreign-language club.

After teacher Orit Nawrocki drills them on their siblings’ ages and on various vegetables, all in an unfamiliar language, she bids them farewell.

Smiling, they respond, “Insha’Allah,” the Arabic phrase for “God willing.”

Ramaz is one of a small but growing number of Jewish day schools across the United States — including Modern Orthodox, Conservative and community schools — that have started to teach Arabic. Students are enthusiastically embracing the opportunity, despite some opposition from peers who don’t understand why they want to learn the “enemy” language.

Worldwide, an estimated 280 million people speak Arabic, with most residing in the Middle East and Northern Africa. In Israel, both Hebrew and Arabic are official languages, but Arabic is the first language of Palestinians and of many Mizrahic Jewish citizens.

“My mother’s family is North African and Moroccan, and they all speak Arabic, so it’s sort of connecting to my roots,” explained Ramaz sophomore Jonathan Asherman, 16.

His classmate Jonathan Baumgarten, also 16, says he hopes to speak Arabic in Israel one day — but he’s not shy about practicing on New York taxi drivers in the meantime. “In a diverse city like New York, all languages are practical,” he said. 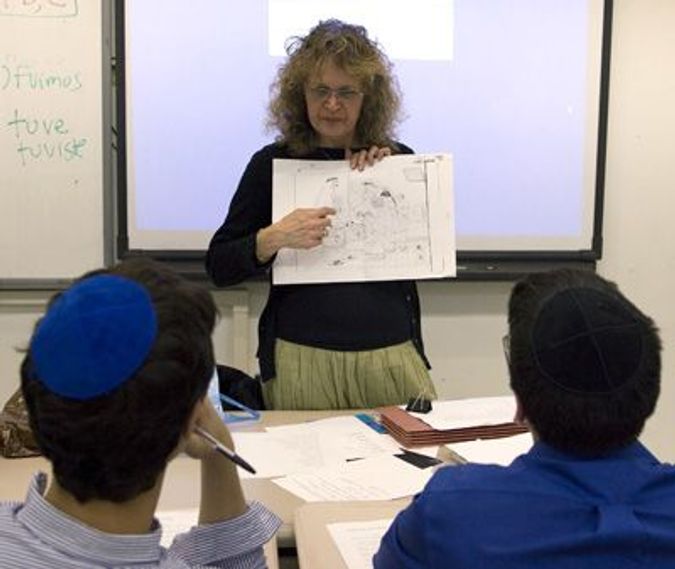 Language Club: Teacher Orit Nawrocki leads a session at an after-school club that focuses on learning Arabic. The club is at Ramaz, a modern Orthodox school in Manhattan. Image by Ariel Jankelowitz

Jewish students’ motivations for learning Arabic range from the pragmatic to the idealistic. Some, like Asherman, have grandparents and other relatives who grew up speaking Arabic. Many see Arabic as a great résumé-booster, especially if they’re interested in politics or foreign affairs. A few harbor super-spy fantasies of joining the Mossad one day. Many say that learning Arabic gives them hope that they may, in some small way, contribute to the peace process.

“I know how naïve this sounds, but I always thought that I would go to Israel and speak Arabic with an Arab,” 16-year-old Becca Siegel wrote to the Forward in an e-mail. “One day I want an Arab to feel like a random American Jewish girl cares about him and his culture. I know that nothing I could possibly do could change the situation in the Middle East, but maybe if one Arab could meet a Jewish girl that cares, that could do something to tip the scale.”

“The reaction from the students has been unbelievably exciting,” says teacher Dodie Goldstein. “The language can open their eyes to new experiences and new ways of communicating.”

Each year, Goldstein says, she gets an increasing number of inquiries from other Jewish schools interested in starting their own Arabic programs.

Arabic is a hot language on high school and college campuses across the United States these days. After the September 11 attacks, interest in learning Arabic soared, according to the American Council on the Teaching of Foreign Languages, and the federal government recently increased funding for public high school instruction in foreign languages deemed important to national security.

But at Jewish schools, learning Arabic takes on a special resonance.

“It would be good for more Jewish kids to know Arabic better, and maybe understand Islam better by understanding the language of Islam,” says Steven Brown, head of the Jack M. Barrack Hebrew Academy in Bryn Mawr, Pa., explaining why next year Arabic will go from club status to a full-credit course offering.

Other Jewish schools that offer Arabic as a class or an extracurricular club include Shalhevet High School for Girls in Cedarhurst, N.Y.; American Hebrew Academy in Greensboro, N.C.; and SAR High School in Riverdale, N.Y.

At the American Hebrew Academy, a boarding school that opened in 2001, the administration has struggled to interest students in traditional Spanish and French classes, Dean of Academics Tammy Williams said. But enrollment in Arabic classes has been steadily increasing.

“Our students spend a term studying in Israel, and many are interested in international studies and maybe making aliyah,” Williams said, “so that probably tugs at them when they are making choices about what to study.”

Jewish schools that want to offer Arabic face unique challenges. Brown and others said it takes work to find textbooks that are both age-appropriate and free of political minefields. For instance, Goldstein said some Arabic language-instruction textbooks she examined, even from reputable publishers, omitted Israel from their maps of the Middle East.

Parental opposition hasn’t been a problem. Parents seem thrilled that their children have the opportunity to learn such an in-demand language.

“Twenty or 25 years ago, people would say, ‘Why?’ But now people are aware the Arabic language is good for people to learn,” says David Rabeeya, who teaches Hebrew and Arabic at Barrack.

Students occasionally face a backlash from their peers. Some of Siegel’s friends made terrorist jokes when she mentioned she was taking Arabic. Ezra Jake, who graduated from Barrack last year and is studying in Israel before heading to the University of Maryland next fall, said some people told him Arabic was a “dirty” language. His response: On the contrary, Arabic is a beautiful language with many similarities to Hebrew.

Derision the students face for studying Arabic seems to strengthen their commitment to learning the language.

“There are people that always ask, ‘Why would you want to talk to them?’ and I just respond, ‘That’s why.’ This general feeling of fear/hatred…” says Joey Goldstein, 19, another recent Barrack graduate who is spending a pre-college year in Israel. “The more people you can talk to in their own language, the more a chance of peace.”

Already, he’s living out Siegel’s dream of building a few Jewish-Arab bridges with his grasp of Arabic. He’s living in Ramat Beit Shemesh, where construction is booming and most of the construction workers speak Arabic. Goldstein makes a point to say good morning in Arabic and ask them about their families. “It’s really nice,” he says in an e-mail. “Sometimes I play guitar, and they will come and make a request.”

Friendly greetings and a few songs — perhaps a small step in improving Arab-Jewish relations, but insha’Allah or, in Hebrew, bezrat Hashem — it’s a start.