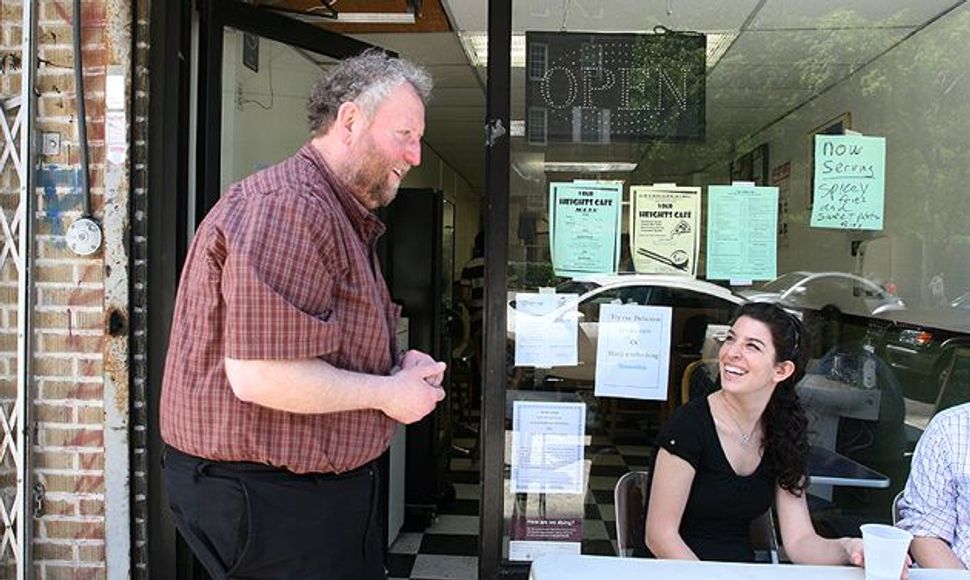 Is Everyone Happy?: A new initiative aims to protect workers at kosher restaurants like Your Heights Cafe. Image by CORINNE RAMEY

A new label just went up alongside the other colorful stickers and pamphlets adorning the window of Your Heights Café in northern Manhattan. It’s a seal with an image of clasped hands, and it was given out by a new organization looking to improve working conditions in New York’s kosher restaurants.

This month, the Orthodox social justice group Uri L’Tzedek announced that it would be giving the Tav HaYosher seal to seven restaurants in New York City that treat their workers fairly and obey existing labor laws. The first recipients of Tav HaYosher — Hebrew for “ethical seal” — were announced May 12, the first anniversary of the federal immigration raid at the Agriprocessors kosher slaughterhouse in Postville, Iowa, where working conditions had come under intense scrutiny.

Since the Agriprocessors raid, there have been a few efforts to push for the improvement of ethical standards at kosher food businesses. Tav HaYosher is the first to provide seals of approval, but the debate that has accompanied it indicates some of the problems that come along with Jewish organizations enforcing labor standards.

“It’s a double-edged sword,” said Michael Gershkovich, owner of Mike’s Bistro and of Mike’s Pizzeria & Italian Kitchen, both of which received the seal. “If you’re not getting a Tav HaYosher, you’re basically breaking the law.”

Gershkovich said that the seal had offended some Orthodox customers because they felt it undermined kosher authorities by trying to create a higher level of ethics. He said he questioned the seal because it awards the designation of “ethical” to law-abiding establishments. “Who’s to say that legal standards are the basis for moral and ethical behavior?” he asked. “But I qualify, and I don’t think it can hurt business.”

Although organizers call the seal “Torah-inspired,” its criteria are little more than a mixture of federal, state and local labor laws. Restaurants must pay their employees minimum wage, pay employees time and a half for overtime hours, and give their workers law-mandated breaks. Work environments must be safe and free of discrimination, and workers must be allowed to organize and form unions. Like New York State labor laws, the Tav HaYosher standards apply to both documented and undocumented immigrant workers.

The laxity of workplace enforcement has been a burning issue in the Jewish community since the Agriprocessors raid. Before the raid, kosher certifying agencies said that Jewish organizations would do better to leave the protection of workers to government agencies. Some kosher experts now acknowledge the flaws in that approach.

“It may be the law on the books, but we know that many of those laws are not observed and enforced,” said Rabbi Menachem Genack, CEO of the Orthodox Union’s kosher division. Speaking of the Tav HaYosher, he said: “We obviously support it, because how can one be opposed to it? It’s really existing labor law.”

Violation of basic workplace laws is pervasive in many low-wage industries, particularly the restaurant industry, said Paul Sonn, legal co-director of the advocacy organization the National Employment Law Project. According to a 2005 study of New York City restaurant workers by the Restaurant Opportunities Center of New York, about 13% of workers reported minimum wage violations, 33% reported verbal abuse by employers and 59% reported overtime violations.

“It has become so common not to pay overtime or comply with other basic protections in segments of New York’s restaurant industry that many employers are in denial that they’re breaking the law,” Sonn said.

The Tav HaYosher isn’t the first ethical seal to hit the kosher food business. In Israel, the Tav Chevrati was started in 2005, with a similar aim of ensuring that businesses are following Israeli employment law. That award has been given to more than 350 businesses, 80% of which made some kind of change to get the seal.

In Israel, however, the seal has gone beyond the kosher market and appealed to secular young Israelis in Tel Aviv and Jerusalem. In the United States, some people question whether the observant clientele at kosher restaurants will care about the ethical seal. Rabbi Moshe Tzvi Edelstein, kashrut administrator of the Manhattan kosher certifying agency K’hal Adath Jeshurun, said the seal is unlikely to be successful or significant, because the consumers to whom he talks are more concerned with kashrut than with ethics.

“I agree that people should look into the ethics of people they provide supervision for, but I think [Uri L’Tzedek] is going a bit too far with that,” Edelstein said.

In the United States, the most prominent effort to ensure good working conditions at kosher businesses is the Hekhsher Tzedek commission, which was started by members of the Conservative movement to certify kosher food production. The group is working toward awarding its first seals — which will be called the Magen Tzedek — in the next few months.

The Hekhsher Tzedek standards go much further than the Tav HaYosher and American government environmental regulations, using not just minimum wage as the standard, but industry and regional wage averages, as well. Rabbi Morris Allen, who has spearheaded the Hekhsher Tzedek movement, said that while he applauded Uri L’Tzedek’s efforts, he was generally uncomfortable with equating government law with Jewish ethics.

“Just as we as Jews would not be satisfied with entrusting the state to be the final arbiter of what is kosher or not kosher, we can’t be satisfied with state enforcement when it comes to workers’ safety and well-being,” Allen said.

Indeed, none of the restaurant owners who spoke with the Forward reported having to make any changes to receive the seal. The seal’s founders acknowledge the criticism, but they said that recognizing law-abiding kosher restaurants is a good place to start. “I think there is the ethics of ideals and there is the ethics of pragmatism,” said Shmuly Yanklowitz, the 27-year-old Uri L’Tzedek co-director. “To really create social change, you don’t shoot for the stars.”

Uri L’Tzedek has trained about 45 volunteer compliance officers and is fundraising to hire two full-time staffers. The group looks at a restaurant’s financial documents and speaks with the workers without the owners present. There are plans to audit restaurants every four to six weeks and to set up an anonymous tip line to report violations, Yanklowitz said.

Uri L’Tzedek approached about 60 restaurants, has awarded the seal to seven of them and is in the process of working with other restaurants, the organizers said. The group won’t disclose how many restaurants didn’t meet the standards, as they want the seal to be a positive designation.

Some restaurants were supportive of the program and said that customers would support the seal in the same way that consumers purchase fair trade and organic food.

“It’s very good, I think,” said Eran Alayos, owner of the Upper West Side’s Café Nana. “We can spread the word to the community and get more business out of it.”

Jerry Berkowitz of Your Heights Café agreed, noting that most of his workers were Hispanic, not Jewish.

“The world should know that we treat our workers well,” he said.