Now Back in Public, Songwriting Legend Leonard Cohen Plays To a New Controversy 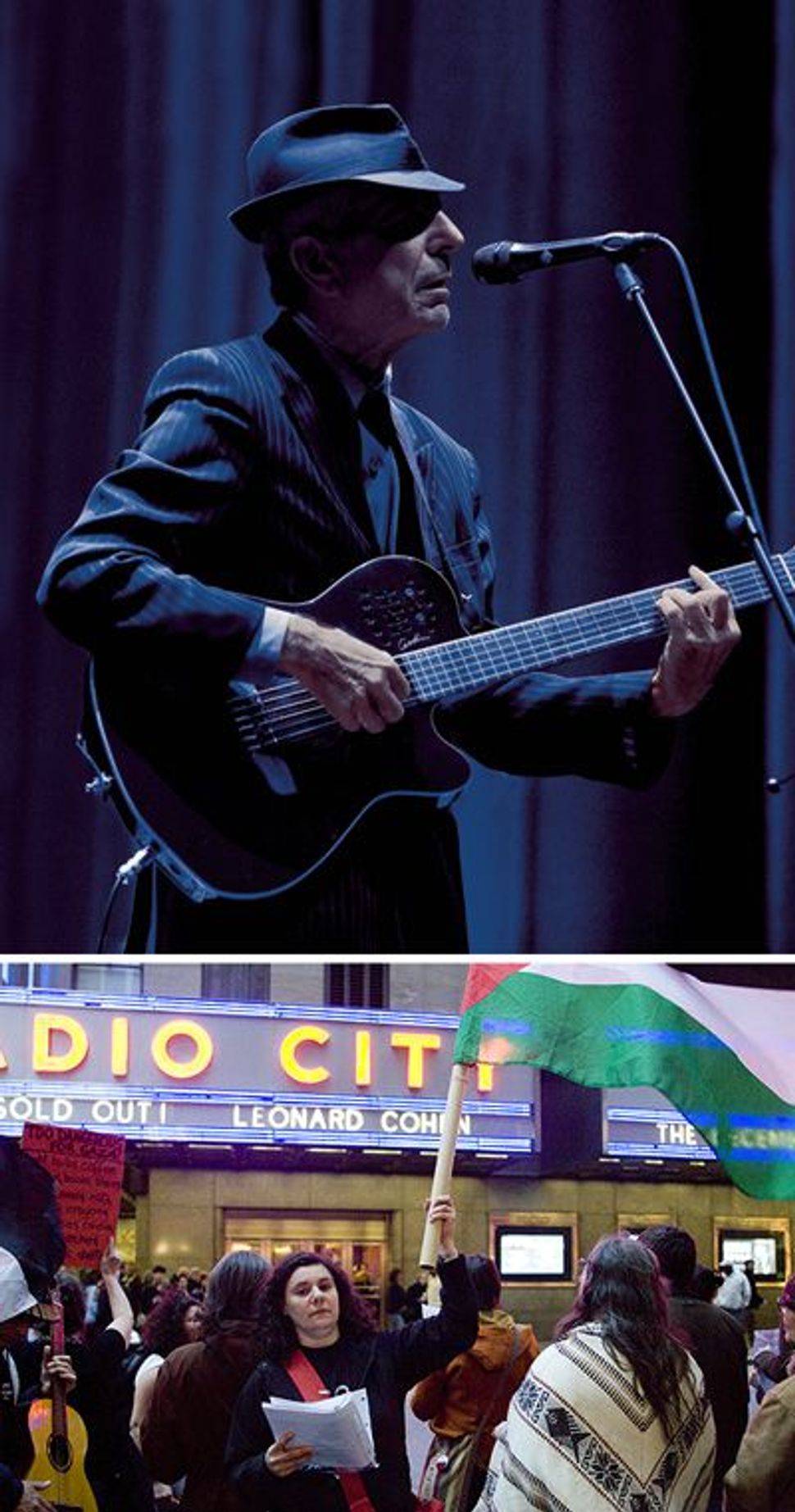 Buddhist monk, Jewish poet, famed philanderer and now the subject of political protest, Leonard Cohen performed at New York City’s Radio City Music Hall on May 17. The elusive Canadian folk-rock legend, on his first major tour in 15 years, worked the capacity crowd of 6,000 fans who shouted out and sang along through three hours of his trademark songs of despair, doom and failed love. Now 74, Cohen bounced around the stage with more energy than he ever displayed as a young singer in the 1960s. 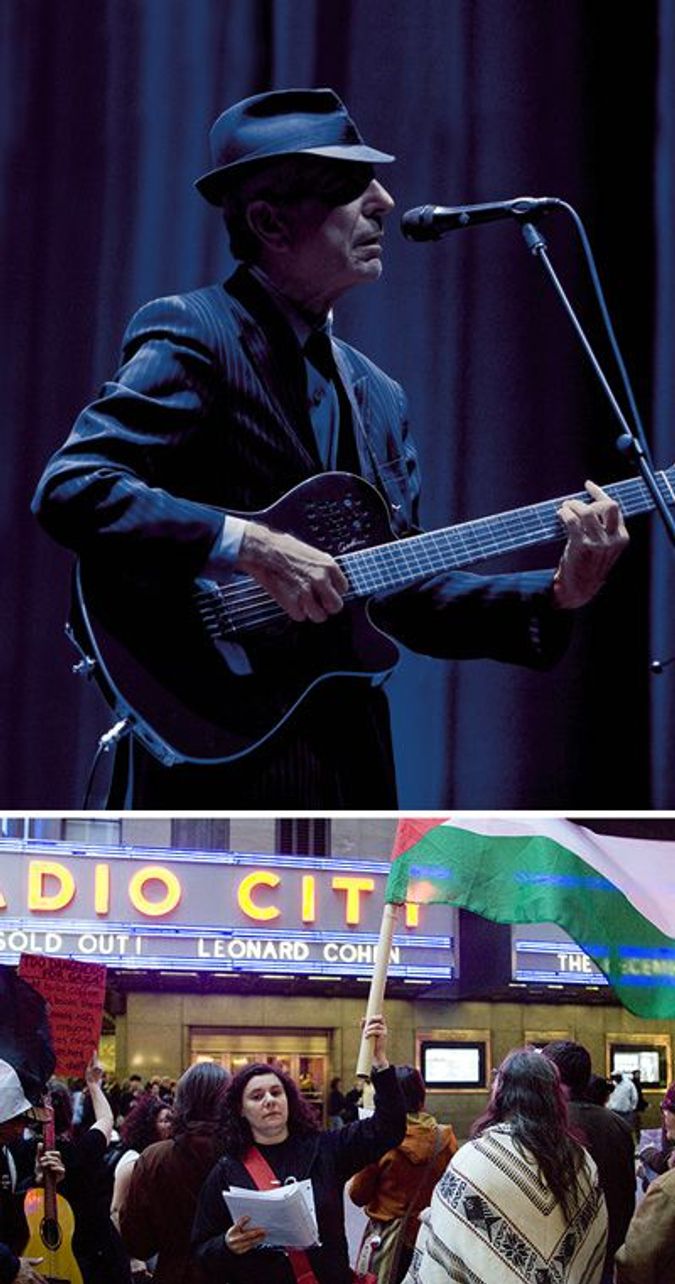 The excitable scene has been repeated in scores of cities, during a yearlong tour that has taken him as far afield as Moscow; Berlin; London, and Melbourne, Australia.

The New York event, however, featured one new element that reportedly had Cohen’s handlers on edge: a group of about three dozen pro-Palestinian protesters standing across the street from the theater entrance, calling on the singer to cancel a concert in Israel that is expected to take place in September.

The demonstrators, organized by local pro-Palestinian organizations and at least one left-wing Jewish group, spent an hour and a half chanting and singing improvised songs addressed to Cohen. A typical song, “Don’t Play Israel, Leonard Cohen,” was sung to the tune of “Hava Nagila.”

Protests against the Tel Aviv concert — which has yet to be scheduled, according to Cohen’s spokeswoman Tiffany Shipp — were begun in late April in Great Britain by a group called the British Committee for Universities of Palestine, which has been advocating boycotts of Israel by artists and academics for several years. Open letters to Cohen have now been issued by a Palestinian pro-boycott campaign and by a group of 110 Israeli intellectuals.

All three groups’ statements cite a poem titled “Questions for Shomrim” that Cohen is said to have written in the 1970s. The brief poem ends with the words, “And you and I/Can only cry and wonder/Must Jewish people/Build our Dachaus too?” The poem appears to have been circulating on the Internet for at least two years, provoking furious debates on numerous Web sites and chat groups.

The British pro-boycott group has posted the poem on its Web site, together with a brief statement signed by Cohen, saying he had written the poem in the 1970s and that the word “Shomrim” referred to the Hashomer Hatzair Zionist youth group, which “supported a binational state in Palestine/Israel when I was close to them.”

In fact, however, Cohen did not write the poem at all, according to Shipp. She emphasized, too, that the trip to Israel had not yet been scheduled, so any discussion of reconsidering his plans was “premature.”

Pro-boycott protesters outside Radio City said they remained hopeful that Cohen would end up staying away from Israel. Three members of their group had met on May 15 with Cohen’s manager, Robert Kory, and several other representatives, they said. “We explained to them that the situation in the region is no longer acceptable,” said an organizer, Riham Barghouti, a West Bank native. “They asked for some alternate possibilities other than cancellation. We said because we were there for the Palestinians, we could not negotiate…. It’s not an issue of coming halfway. It’s an issue of what Israel is doing in Palestine.”

One of the leading organizers of the protest is a group called Adalah-NY: The Coalition for Justice in the Middle East, which participants at the rally routinely referred to as “Adalah” — also the name of an Israeli-Arab rights group funded by the New Israel Fund. A representative from the fund said the two groups had no connection and that the NIF-funded Adalah (The Legal Center for Arab Minority Rights in Israel) did not support boycotting Israel. There had been discussions about Adalah changing its name to avoid confusion, she said, but no decisions have been reached.

Inside the theater, concertgoers who were aware of the protest seemed nonplussed by the idea of canceling a concert. According to John Brett, a Dublin resident who flew to New York for the weekend to hear Cohen — “I had to, because the Dublin concert was sold out,” he said — Cohen had conclusively dealt with the matter of playing in Israel back in 1988, when he was asked the question in a Norwegian television interview. “He said he would play to both Israelis and Palestinians,” Brett said. “I have the tape.”

A glance at Cohen’s biography suggests that the idea of him canceling an Israel appearance, much less comparing Israel to Nazi Germany in a poem, is wildly implausible. In the early 1970s, when he was said to have written “Questions for Shomrim,” he was visiting Israel. He volunteered at an army base during the Yom Kippur War in 1973, at a time when his career was soaring. He has visited Israel several times since then, and performed there twice in the 1980s. In an undated interview, apparently from the mid 1980s, posted on an unofficial Cohen fan site, he called Israel “probably the most democratic country in the world. It’s alive.”

Born and raised in Montreal, where he attended Orthodox day schools through high school, Cohen is one of a trio of iconic figures in the city’s intensely ethnic Jewish culture, along with late novelist Mordecai Richler and poet A.M. Klein. All three became towering figures in Canada’s general culture through writings that were deeply suffused with their Jewish experience, in much the same way as American writers such as Philip Roth and Saul Bellow. Unlike the Americans, however, the three Canadians remained deeply engaged with Judaism and the Jewish community throughout their lives.

The religious-cultural engagement was never uncomplicated for any of them. Cohen himself has led a famously un-pious life, including a series of affairs with wives of friends, which he chronicled intimately in his songs. He was ordained as a Buddhist monk in the 1990s and spent five years in a Buddhist monastery near Los Angeles. Throughout, he has been described in repeated media profiles as a religious Jew who observes the Sabbath. He told The New York Times in an interview last February that he saw no contradiction between his Buddhism and his Judaism, because Buddhism did not involve prayer to a deity.

His current tour’s playlist, reportedly identical in every appearance, is a live psychodrama of his psycho-religious career. His love songs, mostly laments, repeatedly allude to the romantic trials of the biblical King David and Samson. One of his best-known songs, the much-recorded “Hallelujah,” is framed as a confessional by King David himself. Several of his songs draw not on the Bible, but on the prayer book. One of his most durable favorites, performed early in the current concerts, is a play on the Unetaneh Tokef prayer on Yom Kippur: “Who by fire, who by water, who by ordeal, who by common trial…. And who should I say is calling?”

The concert’s closing song, “Whither Thou Goest,” is lifted word for word from the Book of Ruth. It ends with evocative words that easily could have been his response to the protesters outside: “Thy people shall be my people.”

Now Back in Public, Songwriting Legend Leonard Cohen Plays To a New Controversy