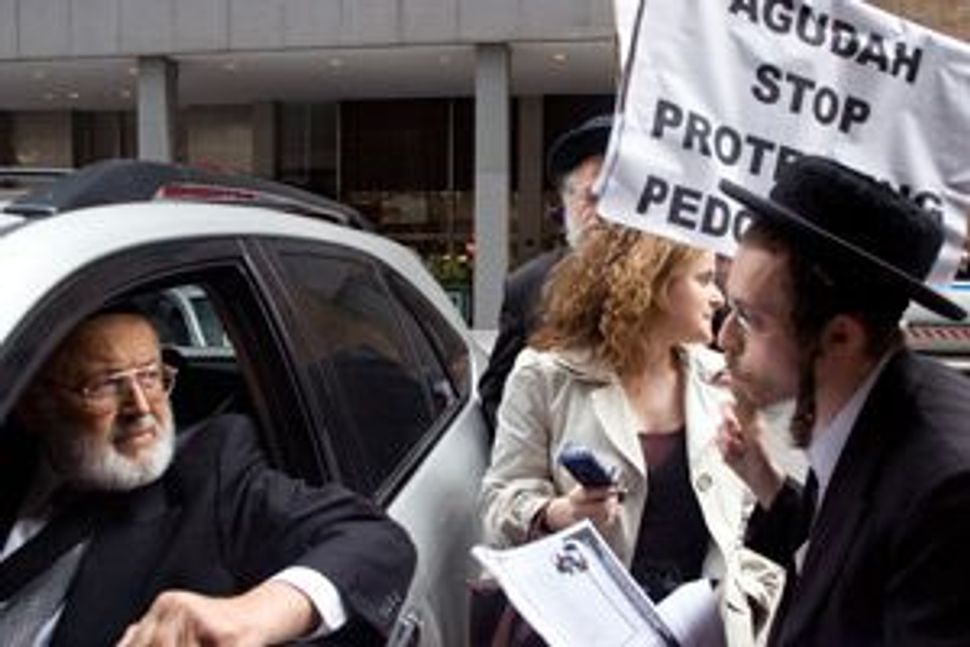 Angry Exchange: Agudath Israel of America trustee Israel Lefkowitz, in his car, argues with Rabbi Nachem Rosenberg (left) and Levi Goldberg (right), with a reporter listening in front of a Manhattan hotel. Image by Ariel Jankelowitz

Religious Dissent: Demonstrators at the yearly dinner of Agudath Israel, an Orthodox umbrella group, voice their anger over what they view as its weak stand against rabbinic child molesters. Image by Ariel Jankelowitz

Inside the grand ballroom of the Midtown Hilton in Manhattan, Agudath Israel of America’s annual dinner was unfolding according to plan. Men and women dressed in traditional yet elegant clothes dined on salmon and listened to Senator Charles Schumer and Mayor Michael Bloomberg pledge their fealty.

Outside, a storm was brewing. 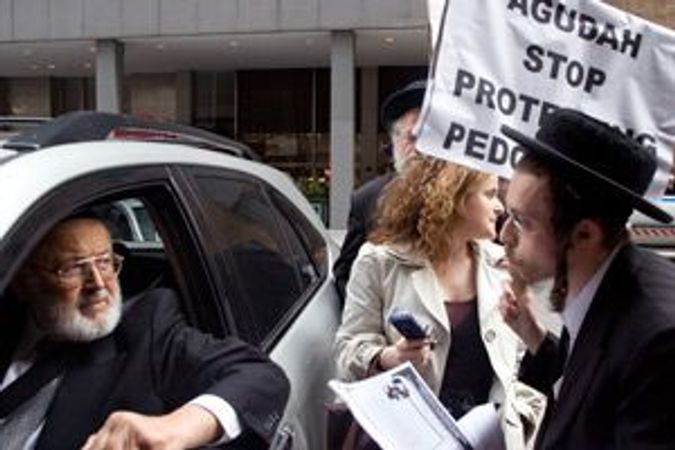 Angry Exchange: Agudath Israel of America trustee Israel Lefkowitz, in his car, argues with Rabbi Nachem Rosenberg (left) and Levi Goldberg (right), with a reporter listening in front of a Manhattan hotel. Image by Ariel Jankelowitz

A dozen protesters stood in front of the Hilton’s parking garage and waved signs that said “Agudah: Stop protecting pedophiles.”

Most attendees waved off the protesters or ignored them with a look of distaste.

But Agudath board of trustees member Israel Lefkowitz rolled down his car window to chastise the protesters.

“I am against sexual harassment for all the children,” Lefkowitz said. “But you don’t do this in public.”

The angry exchange outside the annual dinner May 15 for Agudath Israel, a national ultra-Orthodox umbrella group, encapsulates the escalating battle within the Orthodox community over sexual abuse of children by rabbis, yeshiva teachers and other religious authority figures. On one side, a band of loosely organized victims of sexual abuse and their supporters are crying out for community leaders to take a tougher stand against pedophilia. On the other side, many powerful leaders regard any public airing of sexual abuse allegations in the Orthodox community as hillul Hashem, a desecration of God’s name.

One of the protesters, Mark Appel, yelled at Lefkowitz in his car: “Your children are being molested, and you know that [officials from Agudath] are not doing anything about it.”

“Why are you so angry?” Lefkowitz asked.

“What is Agudah doing to my molester?” asked Joe DiAngelo, who says he was raped as a child in a Brooklyn mikveh.

In his defense, Lefkowitz replied that he booted out a principal who was molesting boys at his son’s school.

“What happened to him? Why wasn’t he arrested?” asked Levi Goldberg, a soft-spoken young man wearing a traditional black suit, hat and peyes.

“I do not know,” Lefkowitz said. He called the protest “a desecration of a Godly institution.”

The protesters’ ire was aimed at Agudah’s opposition to a bill now before the state Legislature that would extend the statute of limitations for civil and criminal claims of child sexual abuse and create a one-time, one-year “window” during which victims of crimes committed beyond the statute of limitations could file civil claims against their alleged abusers and the institutions that harbored them.

The bill appears stalled in the state Assembly a few weeks before the legislative session adjourns.

Agudah’s official position is that it supports lengthening the statute of limitations, but opposes the one-year window because it could allow plaintiffs to file decades-old claims.

Rabbi Yaakov Perlow, the Novominsker Rebbe and Rosh Agudath Israel of America, took a harsher tone in his dinner address, chiding “the bloggers and the picketers, presumptuous promoters” for the notion that “they know better [than Agudah’s Council of Torah Sages] what is good for the Jews.”

Perlow called child sexual abuse “a serious issue.” He acknowledged a need “for correcting the past – and for addressing the future, creating means to guide against wrongdoing to children.”

They accused Agudah of a conflict of interest. The organization is named as a defendant in sex-abuse lawsuits involving Rabbi Yehuda Kolko, accused of molesting dozens of students, including boys at an Agudah-run summer camp, and would likely face more lawsuits if the window legislation passes.

Appel, one of the protesters, is founder of a Jewish community group called Am Echad aimed at promoting Jewish unity and supporting social services. It is New York-based with chapters in other cities.

“I’ve met kids who have been abused [recently] by people who were abusing kids 30 years ago,” said Appel. “These guys [Agudah] are just stalling – they’re emotionless on this issue. So they’re going to sit here tonight and have a nice collective meal, and meanwhile their community is being torn apart.”

Elliot Pasik, a director of the Jewish Board of Advocates for Children, a group in favor of the window legislation as well as mandatory fingerprinting of private school teachers, said he’s disappointed by Agudah’s response.