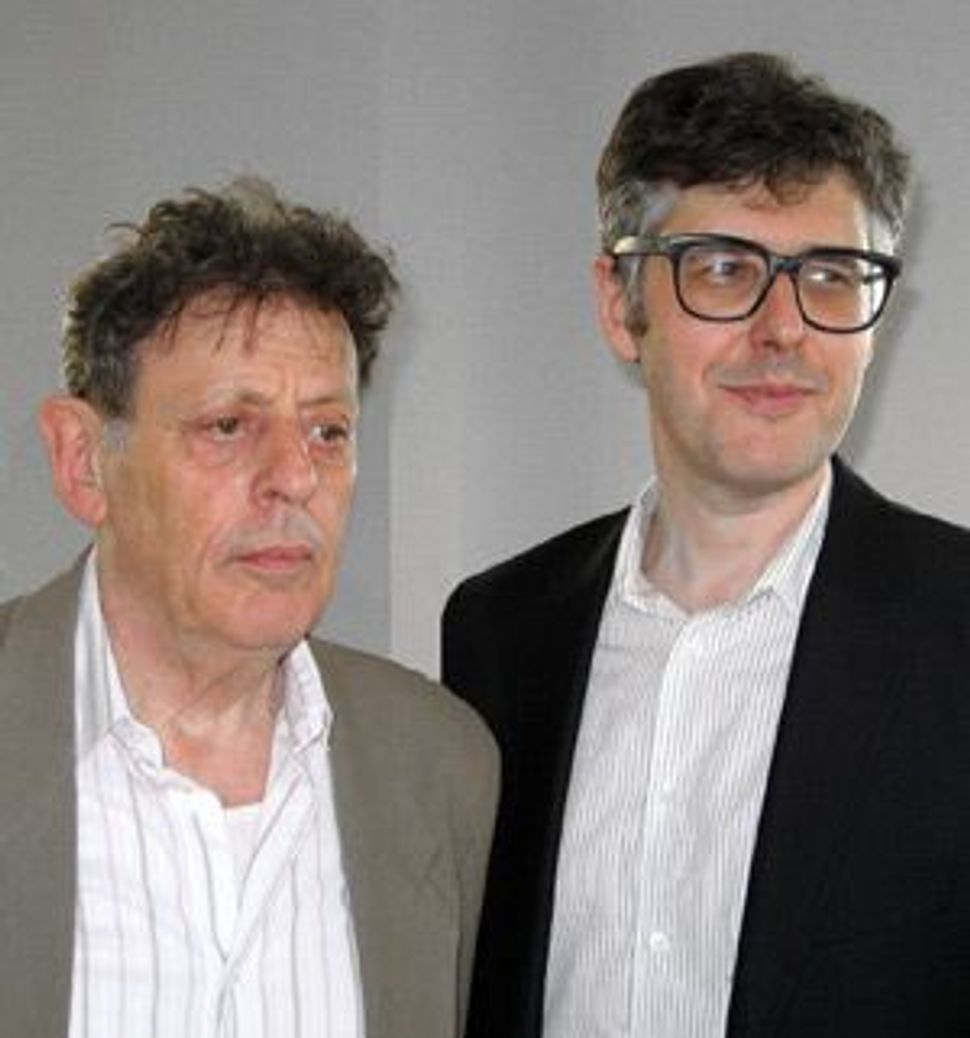 “GLASS ON GLASS” — A COMPOSER PERFORMS AND MUSES ABOUT HIS WORK 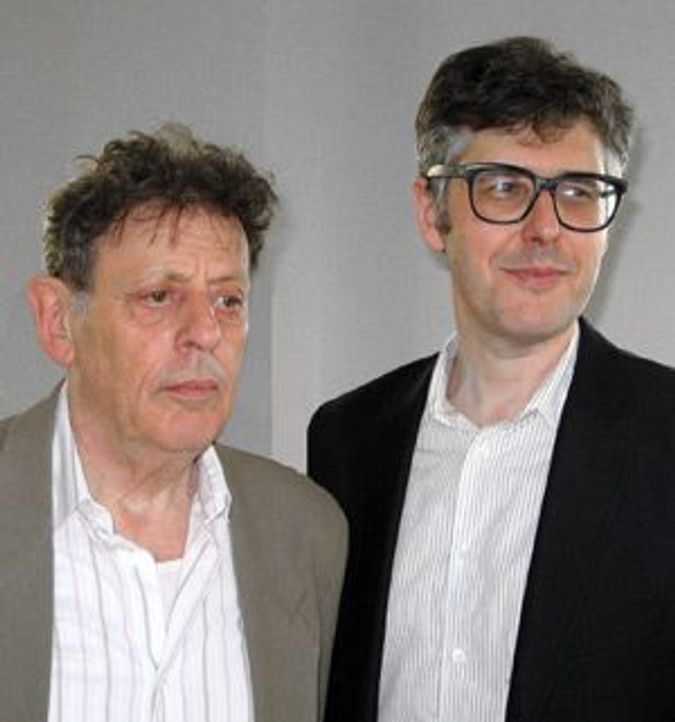 Listening to Philip Glass speak is akin to hearing his music — staccato and zigzagging in time. At the April 28 Glass on Glass gala at St. Ann’s Warehouse — a state-of-the-art theater space in Brooklyn’s waterfront DUMBO neighborhood —composer Glass was interviewed by his cousin, Ira Glass, National Public Radio host and producer of “This American Life.” The result was a fragmented concerto of words and music. Glass, who was born in Baltimore and is the grandson of Jewish immigrants from Lithuania, recalled: “My father was not an educated musician, but he taught me how to listen. He would say, ‘Hey, kid! I want you to hear this piece.” Glass expounded: “Music is linguistic ideas… .The theme would actually change the form… I could be obsessed with an idea for 10 years… I wanted a structure that decomposes itself.”  Having just revisited Woody Allen’s 2007 thriller “Cassandra’s Dream,” which features Glass’s exquisite score, the only “decomposing” that was evident was of some unsavory ill-fated characters.

Asked by his cousin, “How important was it for you to make something new?” Glass replied: “What’s new is the way we hear it… [the] conspiracy of the music… to hear it differently. When you name your children Walter or Henry, there was no Walter or Henry until you name them.” Attempting to explain his score for the film “Einstein on the Beach,” a segment of which he performed, Glass said: “I am just trying to get through the piece. The end becomes the beginning. The rhythm is the content. The subject of Einstein is how do you make Einstein? You try to take the narrative off the throne. For example, how is love connected to DNA? There is no clothesline to hang the emotion on without the DNA…. If you can’t count to eight, you can’t write ‘Einstein on the Beach.’” Crystal clear — I think. The evening ended with the Glass cousins performing Allen Ginsberg’s poem “The Wichita Vortex Sutra,” a 1966 anti-Vietnam War poem that Philip Glass and Ginsberg performed for years until the poet’s death. Glass was at the keyboard, and Ira read the poem. The private pre-concert reception was held in DUMBO’s newly renovated Clock Tower Condominium, which offers a spectacular view of New York Harbor. Minglers included event chairs Diane and Joseph Steinberg and Ilisa and Steven Reissman; St. Ann’s artistic director, Susan Feldman, and Jane and David Walentas, who helped transform DUMBO into a “happening” locale, with St. Ann’s as a cultural showcase. Also present was Forward reader and Brooklyn Borough President Marty Markowitz.

JEWISH SERVICES FOR THE AGED GALA HAILS — “OUR AGED, OUR TREASURE”

“Our mission is to care for the elderly of this city,” said the Jewish Association for Services for the Aged’s president, David Warren, at the organization’s April 23 gala. “JASA serves approximately 55,000 clients annually with food, housing, homecare, prevention of elder abuse, legal and political advocacy.… The impulse and philosophy that drives us,” Warren noted, “was articulated by Rabbi Abraham Heschel, who said: ‘The test of a people is how it behaves toward the old.

Affection and care for the old, the incurable. The helpless are the true gold mines of a culture.’” Following a scrumptious buffet at The Plaza, the evening was capped by Primary Stages’ apt production, “Chasing Manet,” starring Jane Alexander and Jane Cohen as uncooperative nursing home residents plotting a (successful) escape.

“We act for ourselves, for our own benefit,” was how Warren explained the “selfish or materialistic” subtext of those who support JASA. That is, we regard the community, our elderly neighbors, as an asset in the truest sense of the word. They are, after all, the repository, the bearers, of our language, our traditions, our culture and, in every important sense, the source of our own identity. As such, they are not merely an asset — they are a treasure.” Apropos, Warren cited his “godmother Dora Kaufman,” who was born in Lodz, Poland; spent 15 years in Australia, and died in 1991 at the age of 102. “Does anyone know who was [the U.S.] president the year she was born [1889]? Imagine the journey and arc of Dora’s life… what she experienced as life-changing innovations, the great swath of history to which she bore witness.”

The pre-play reception included greetings from Louise Greilsheimer, UJA-Federation senior vice president of agency and external relations. JASA CEO Aileen Gitelson touted the 40-year-old organization, which currently operates on an annual budget of $100 million and has a staff of more than 2,000, plus 400 volunteers serving at more than 50 sites in New York, Nassau and Suffolk counties. “In the face of the economic downturn [and] JASA’s revenue losses in most of our government contracts,” Gitelson lamented, “we have been asked to serve more clients with fewer dollars.… We have cut positions and some programs and have restructured others.” On an upbeat note, Gitelson informed: “Through this right sizing, we have been able to retain all our core programs… seniors will be able to continue to come to senior centers, to receive their home-delivered meals and to know that help from a social worker is only a telephone call away.”

Regrettably, Tina Howe’s “Chasing Manet” — a comedy — which addresses the angst of placing partially or totally out-of-touch-with-reality parents into a facility, ran only through May 2. This was no reflection on the reviews; it was due to the time allotted by Primary Stages. Deliciously directed by Michael Wilson, the cast included David Margulies, whose performance in the 1997 one-man production “Three Tales by I.B. Singer” I still recall with great relish.

To honor New York City’s Dutch heritage, and on the occasion of the 400th anniversary of Henry Hudson’s arrival in New York Harbor as captain of the Dutch East India ship The Half Moon, the Fund for Park Avenue, a not-for-profit charity, planted 60,000 orange tulips along the avenue, from 54th Street to 86th Street. The planting was celebrated at a reception held at Scully & Scully, a Park Avenue landmark, and was attended by 200 guests, including members of the Daughters of Holland Dames.

I told the Netherlands’ consul general, Hugo Gajus Scheltema, that I live in Vlissingen. “Vlissingen, Holland? he asked. “No. “Vlissingen, New York,” I replied, “so named by the Dutch when they landed here in 1645. The English renamed it Flushing in 1664.” Familiar with the history of the 27 Dutch Jews who fled Recife, Brazil, and landed at New Amsterdam in 1654, the consul asked me if I knew about the 10 saplings from the horse chestnut tree outside of Anne Frank’s annex (which she mentioned in her diary) that are to be planted around the world. Yes, I did. In fact, I told him I had been to the Anne Frank house and had twice met Miep Gies, who helped hide the Frank family. I also mentioned that in 1981, my husband and I traveled to Vlissingen bearing a “Proclamation of Greetings” from then Queens borough president Donald Manes and “the 2 million people of Queens” to Vlissingen’s then burgomaster, Th. J. Westerhout and the people of Flushing’s sister city.

The Tulip event sent me back to my notes and diary. The city of Vlissingen was battered August 13, 1809, by Napoleon’s 1,100 guns, leaving it poverty-stricken and in ruins. In 1944, the Allies landed on the island’s bombed-out dikes. At the end of World War II only one undamaged house stood in all of Vlissingen. The dikes had to be cleared and rebuilt, and the new dredging took five years. In 1953, a disastrous flood inundated Vlissingen and took almost 2,000 lives. Messages of condolences and substantive aid were sent from Flushing, N.Y.

That trip was also memorable for our then Dutch-Jewish encounters. We met Freda Menco, a noted journalist and TV personality who was on the same train with Anne Frank to Auschwitz. She did not want to talk much “about that time.” On the bus trip to the Anne Frank House, we were the only English-speaking and only Jewish couple. With us was a man from the Black Forest who spent the war years as a prisoner of war — in Texas. He accepted my Litvishn Yiddish as a Swiss dialect. A Syrian couple, the husband a gynecologist who studied in Warsaw, spoke perfectly accented Polish. A German woman with her granddaughter said: “It is important that she see this. They teach it in school.” “Where are you from? “ I ask. “Aachen,” she replied. I venture: “I heard that some people do not believe that this happened.” She was indignant: “Ach, ja. It happened, it happened. My neighbors, my friends, they were taken away in the night to Theresienstadt.”  She shook her head and walked away. Climbing the stairs up to the annex with us was a young man with a Star of David on a chain and a huge Star of David embroidered on the back of his denim jacket. His hair was white blond, and he had transparent blue eyes. With him was his German girlfriend. “Where are you from?” I asked. “Germany.” And his parents? “They are from Poland.” As we left the museum, a bus was disgorging several dozen Japanese tourists.