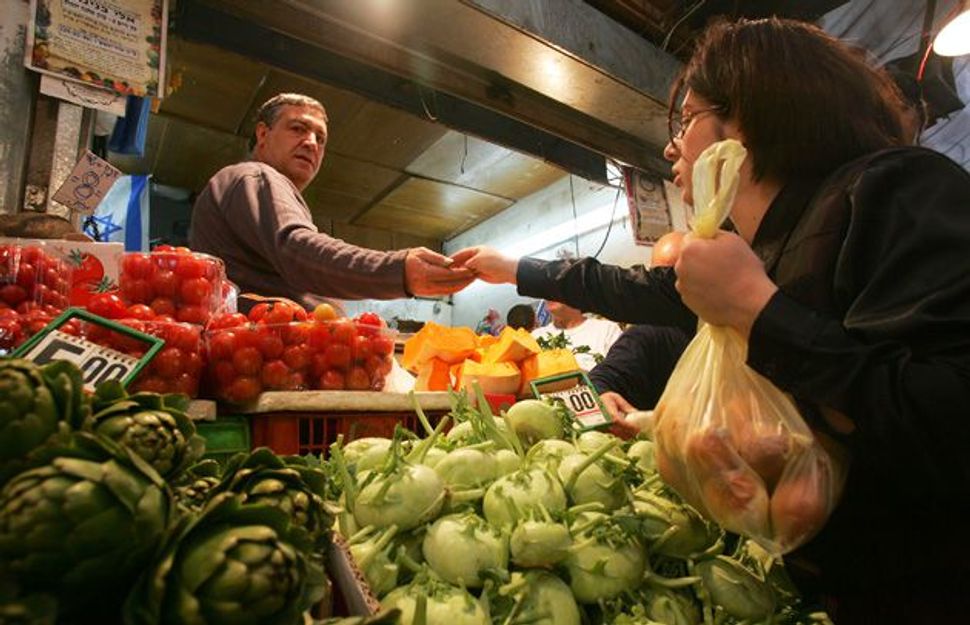 Yes, We Do Have Bananas! Israelis have traditionally eaten large quantities of fresh fruits and vegetables, but critics say that a proposed tax, designed to close a budget gap, could cause consumers to cut back, particularly among the poor. Image by Getty Images

While most of the world is fixated on Jerusalem’s take on the settlements and peace negotiations, inside Israel, lawmakers have found time to fight over a very different cause: a plan to tax fruits and vegetables.

The plan, not yet implemented, has provoked a storm of opposition in the Knesset, including within Prime Minister Benjamin Netanyahu’s own Likud party. It was Likud lawmakers who recently led the charge against the tax proposal, which they say would threaten the traditional relationship between Israelis and their food. Opponents of the tax say that at a time when governments around the world are desperate to promote healthy eating, it is a bad idea for Israel to start adding to the cost of fresh produce.

“Most Western countries are discussing taxing high-sugar, high-calories products in a bid to lower their consumption,” said Mati Berkovitch, chairman of the Israel Ambulatory Pediatrics Association. “In Israel, in a questionable, destructive decision, the government is interested in taxing the healthy foods, whose consumption is vital for health.”

As part of his efforts to shore up the economy in a time of recession, Netanyahu, who is also the minister of economic strategy, wants to subject fruit and vegetables to a value added tax, from which they have been exempt since 1976. The tax is currently 15.5%.

Netanyahu and the Finance Ministry introduced the plan during marathon budget talks May 12 and 13. It was subsequently approved by the Cabinet, along with the rest of the draft budget, which includes other measures intended to help Israel limit its deficit, limit spending and generally weather the economic storm. These include taxes on certain vehicles and a 6.5% cut to the budgets of all government ministries except defense.

The budget needs to be approved by a majority of lawmakers in a vote in mid-July. While Netanyahu has a majority on paper, he still needs to win over lawmakers from the Shas party, whose ministers voted against the budget in Cabinet, as well as other potential rebels from coalition parties. Without them, the budget could fail and the government could fall apart.

“What we’re trying to do is very unpopular,” Finance Ministry spokesman Shlomi Shefer admitted, “but it’s the right thing to do.” He said that the financial situation in the country is such that the only other options were to increase the value added tax even more, or to cut funds for social security.

It was at a May 26 meeting of the Knesset’s Finance Committee that the extent of the anger about the produce proposal became evident. Condemnation came from lawmakers in several parties and was led by Likud lawmakers Miri Regev and Zion Pinyan, party whip in the committee. Other critics included the committee’s chairman, Moshe Gafni of United Torah Judaism; Deputy Prime Minister and Interior Minister Eli Yishai of Shas, and Minister of Minorities Avishai Braverman.

Ben-Gurion University economist Bradley Ruffle said that demand for produce is not “inelastic” enough to expect that buying patterns will be unaffected by the tax — especially among lower-income groups. If the new tax is passed and does cause a fall in demand for fruits and vegetables, it could change long-standing cultural norms in Israel.

“Fresh-food consumption is a matter of habit, and in Israel, unlike in Europe, people have fresh vegetables in every meal,” said Ben-Gurion economist Haim Shalit, an expert on vegetable pricing. He said that Israelis have an enthusiasm for fresh produce and tend to buy in large quantities — “one of the only things that has stayed” from the pioneering spirit of early Zionism.

It is precisely this kind of fresh-food habit that the World Health Organization, together with governments in many countries, is currently working to cultivate globally. In America, the Centers for Disease Control and Prevention promotes the “5 a Day” campaign, encouraging people to eat five portions of fruits or vegetables daily.

Regev fears that as families feel the pinch, reverberations will be felt across the economy “from restaurants to falafel stands to canned goods, and will ultimately lead to inflation.”

The measure would be a particular blow to Israeli farmers, who have been hit by a number of challenges in recent years, including the high cost of water, the increasing taxation on the employment of foreign workers and the global threats to boycott Israeli produce. Farmers in the south additionally complain that their working schedules have been interfered with by rocket fire from Gaza.

“The situation of Israeli agriculture is already very difficult, and now this,” said Ruth Pugatch, spokeswoman for the Israel Vegetable Growers Association — a body that has described the plan as “the final nail into the farmers’ coffin.”

For consumers, economists say that the tax will hit low-income shoppers the hardest. Elliot Berry, Hadassah University Hospital public health expert and adviser on nutrition to the Health Ministry, said that the measure could hit the very group the government should be encouraging to eat more fruits and vegetables. “The problems of health are more prevalent in the lower social classes,” he said.

According to some politicians, this means that any revenue from tax on fresh produce will be swallowed up into growing health care expenditures. Kadima lawmaker and physician Rachel Adato said, “The anticipated addition to the state’s Treasury will be smaller than the long-term cost of the treatment for complications caused by obesity.”