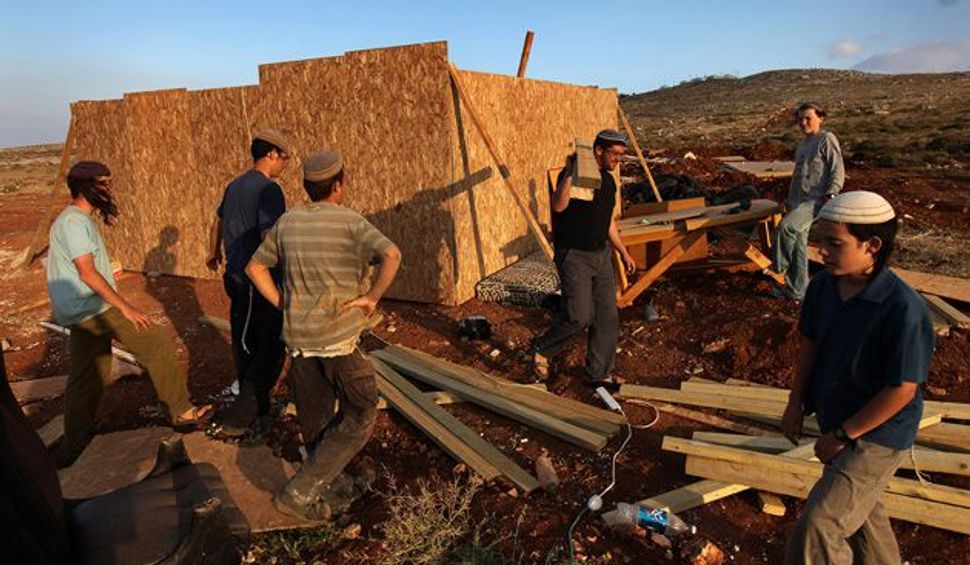 A time to tear Down, A time to Build Up: Shortly after it was demolished by the Israeli mili-tary, settlers rebuild an illegal outpost in the West Bank on May 24. Image by Getty Images

For the first time in America’s decades of jousting with Israel over West Bank settlements, an American president seems to have succeeded in isolating the settlements issue and disconnecting it from other elements of support for Israel.

It is a disentanglement now seen most clearly in Congress, which in the past served as Israel’s stronghold against administration pressure on the issue. But when Israeli leader Benjamin Netanyahu came to Capitol Hill for a May 18 meeting after being pressed by President Obama to freeze the expansion of West Bank settlements, he was “stunned,” Netanyahu aides said, to hear what seemed like a well-coordinated attack against his stand on settlements. The criticism came from congressional leaders, key lawmakers dealing with foreign relations and even from a group of Jewish members.

The Jewish lawmakers among them believed “it was their responsibility to make him [Netanyahu] very, very aware of the concerns of the administration and Congress,” said a congressional aide briefed on the meeting. The aide, who declined to be identified, stressed that despite the argument on settlement issues, members of Congress remained fully supportive of Israel on all other issues, including the need to deal with Iran and the concern over Hamas and Hezbollah’s activity.

In their meetings, according to the congressional aide, lawmakers rejected Netanyahu’s call for Palestinian reciprocity on terrorism as a precondition and kept pressing him on the need to stop building in settlements.

Another staffer on Capitol Hill however, stressed that the heated atmosphere should not be interpreted as a sign of a breakdown in relations. “Jewish members,” the staffer said, “express their views very freely” when meeting with Israeli leaders, and did so with Netanyhau’s predecessors as well.

The Israeli prime minister also found little support for his position on settlements from the organized Jewish community. Jewish communal groups have largely remained silent and did not spring to Netanyahu’s defense.

“Even the most conservative institutions of Jewish American life don’t want to go to war over settlement policy,” said David Twersky, who was until recently the senior adviser on international affairs at the American Jewish Congress. “They might say the administration is making too much of a big deal of it, but they will not argue that Jews have the right to settle all parts of Eretz Yisrael [the Land of Israel].”

The single voice backing Netanyahu’s policy among groups with the Conference of Presidents of Major American Jewish Organizations — the umbrella organization of Jewish groups — was that of the Zionist Organization of America, which denounced the administration’s demands as “illogical, unjust and dangerous.”

The renewed clash over settlements surfaced following Netanyahu’s May 18 meeting with Obama, when it became clear that the new administration was trying to redefine the discussion at a time when pro-settler political parties play a prominent role in Israel’s governing coalition. Obama sought a comprehensive settlement freeze from Israel as part of a White House effort to restart a dormant peace process, which, in turn, is part of a larger strategic project: bringing together Israel and its Arab adversaries to resist a threat from Iran as it pursues nuclear capabilities.

Netanyahu rejected this linkage and America’s demand for a settlement freeze, arguing that it should not include “natural growth” — defined as population growth from within and territorial expansion by already established large settlement blocs expected to remain under Israeli rule in a final-status agreement.

But a recent report by Israel’s Peace Now organization, which monitors settlement activity, found that more than a third of new units built in established settlements in recent years are used to absorb newcomers rather than to accommodate internal growth.

Obama did not address the natural growth dispute publicly after his meeting with Netanyahu, but a harsh and clear statement by Secretary of State Hillary Rodham Clinton in an interview with the Al-Jazeera network made it clear that Netanyahu’s view was unacceptable. “We want to see a stop to settlement construction, additions, natural growth — any kind of settlement activity,” she said.

The position was not new. The so-called “road map” peace plan — a broad multi-step process first outlined in 2002 — calls for a complete settlement freeze by Israel, “including natural growth of settlements” as one of the first steps to be taken.

Netanyahu was publicly silent on the issue during his stay in Washington. But on returning home, he defiantly told his Cabinet, “The demand for a total stop to building is not something that can be justified, and I don’t think that anyone here at this table accepts it.”

That was certainly true for Defense Minister Ehud Barak of the usually more dovish Labor Party.

“We need to find a way to explain to the Americans that there is no link between outposts and Iran,” Barak told Israeli reporters. “It’s not as though the minute an illegal outpost is dismantled, the Iranians will abandon their nuclear aspirations. Therefore, these issues must not be directly hinged on one another.”

On May 26, Netanyahu sent a team headed by Cabinet minister Dan Meridor to convey this message to American special envoy George Mitchell and to offer a new deal in which Israel will dismantle illegal outposts in return for American consent to continue building for natural growth needs.

Israel first promised to dismantle the illegal outposts in 2003, when then-prime minister Ariel Sharon gave a similar commitment to Bush.