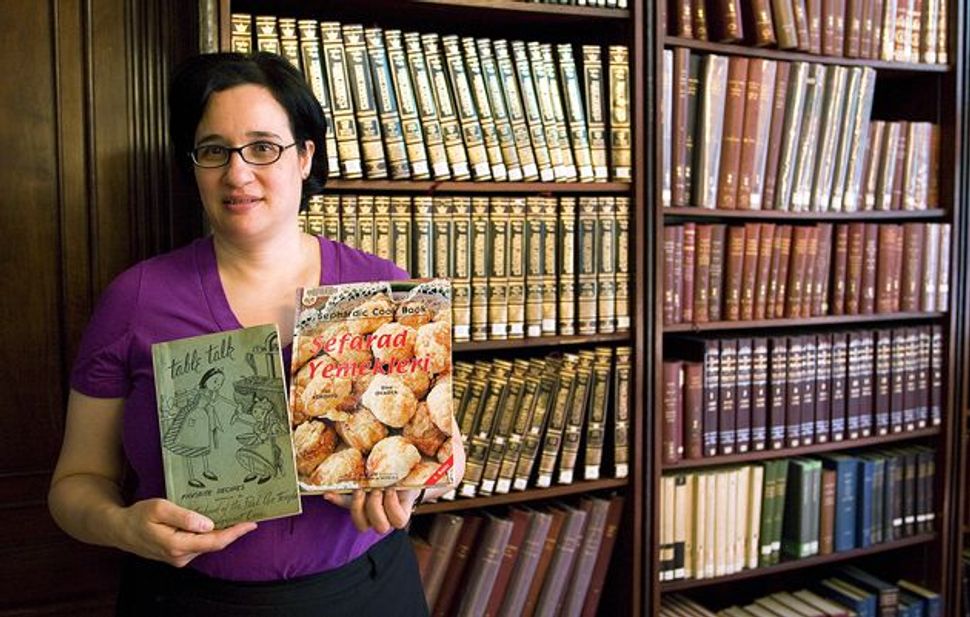 From the Kitchen: Roberta Saltzman shows off two of the 700 cookbooks she?s collected on her own and donated to The New York Public Library. Image by ARIEL JANKELOWITZ

Looking for a Jewish cookbook with a recipe for lobster canapés? Then Roberta Saltzman is your woman.

Or how about the Sinai Temple Sisterhood’s old cookbook from Marion, Ind., with its offering of venison with sour cream? Or stuffed bangus, a (kosher) fish from the Philippines used for a Filipino variation on gefilte fish and highlighted in “So Eat a Little,” published by the Women’s Auxiliary of the Jewish Community of the Philippines?

Every few days, Saltzman brings another cookbook to the library where she works and donates it to the collection. But she’s not concerned with just any cookbook. And she doesn’t work for just any library. On her own time, and with her own resources, Saltzman — who confesses that she herself doesn’t cook much — has built The New York Public Library’s collection of Jewish cookbooks into the largest public collection of Jewish cookbooks in the country; indeed, probably the world.

The 1,500 volumes now sitting in the public library’s Dorot Jewish Division include 700 cookbooks that Saltzman bought online from eBay. The collection is more than double the number in the Library of Congress, and far more than Harvard’s Schlesinger Library collection, two other major repositories of historic Jewish cookbooks.

Until now, the library has not publicized the collection or Saltzman’s role in it. But the Jewish Division is currently planning a section on its Web site, to go up later this year, highlighting the cookbooks. Saltzman has catalogued and indexed them all for public use.

“People who came in here showed interest in Jewish cookbooks, and I usually respond to what people ask for,” said the native of the Astoria section of Queens, explaining her pastime as though it were the most obvious thing in the world. “I like having something that other libraries don’t.”

Saltzman, 48, turned to collecting cookbooks as a personal passion with a public mission. “I think ‘craze’ is the right word,” she said, but added, “You could do worse than be a collector of cookbooks.”

When Saltzman goes on eBay, she never knows what she may find. It might be a rare cookbook produced by the Hebrew Ladies’ Aid Society of Joplin, Mo., in 1912, or a 1937 German- and Hebrew-language cookbook published in Tel Aviv.

The majority of the volumes are community cookbooks, often compiled by synagogue sisterhoods or local chapters of national Jewish organizations across the country and in other parts of the world to raise money. This cottage industry has been a popular form of fundraising among church and ethnic groups, particularly in the United States, since the turn of the 20th century. American Jews played their part in fueling this fundraising phenomenon.

“Cookbooks are a great and humble source for vernacular culture, and they speak to so many aspects of Jewish life,” explains Jenna Weissman Joselit, a professor of Judaic studies and American studies at Princeton University. “I don’t think anybody today would deny the value of Jewish cookbooks and particularly community cookbooks, which are one of the most potent and unmediated sources reflecting region, religion, class, women’s history and all kinds of social practices.”

Weissman Joselit, who has published widely on Jewish vernacular culture, has a monthly column in the Forward and specializes in food, hailed in particular Saltzman’s bibliographic expertise and sensitivity to American Jewish culture in selecting and compiling The New York Public Library’s titles. “Hats off to her,” she said.

Over many hours logged online, Saltzman has tracked down community cookbooks from nearly every state, though she is missing titles from Wyoming, Mississippi and Montana. She found cookbooks from San Antonio and Salt Lake City to Saskatchewan and Salonika, from small communities such as Corpus Christi, Texas; Waukesha, Wis., and Florence, S.C.

Many are rare and obscure. Saltzman managed to find a fundraising cookbook produced in Berlin under Hitler in 1935 by the Judischer Frauenbund, an early German feminist organization. She found a British cookbook published by the Children and Youth Aliyah Committee for Great Britain in 1950. She found one of the earliest and less-known American Jewish community cookbooks, a 1909 National Council of Jewish Women, San Francisco cookbook, and an entirely Polish-language cookbook published in Israel in 1950.

Unusual cookbooks from the private sector also pop up in the collection, including “Sunshine Kosher Recipes,” from the Loose-Wiles Biscuit Company of Spokane, Wash., in 1930, and the Mogen David Wine Corporation’s 1950 cookbook from Chicago, “Recipes the Whole Family Will Enjoy.” Rare cookbooks authored by individuals include Margit Lobl’s Hungarian cookbook, published in Israel in 1953, and the 1959 “Koscheres Ambrosia,” Frieda Hochstim’s Austrian cookbook published in Vienna.

Though Saltzman understood the historical significance of increasing the library’s existing collection, she felt her employer would not be willing to provide the funding for acquiring the books she found available and affordable on eBay. They run on average $15 per cookbook. When researchers began using the library’s growing collection for historical research, she felt she was on to something. Soon, esteemed cookbook authors such as Joan Nathan were making regular appearances. And Saltzman is still buying cookbooks of eBay.

Using these cookbooks, researchers may learn about the history of Jewish ritual observance and cultural practices among Jews in different time periods and places.

Sophisticated nonkosher recipes, such as the lobster canapés — featured in numerous cookbooks — were particularly popular in early Reform Jewish cookbooks and later post-World War II community cookbooks, when a blend of traditional Ashkenazic and treyf dishes characterized these homespun projects.

The Dorot collection also offers a glimpse at some recipes that, while kosher, are sort of, well, just strange. “Look & Cook,” compiled and edited by the Greensboro, N.C, chapter of Hadassah in 1959, published one woman’s recipe for porcupine relish, an appetizer composed of a head of cabbage studded with toothpick kebabs of assorted cheeses, onions, olives, radishes, gherkins, cauliflower and pineapple chunks. Thankfully, such midcentury delights are now limited to the interests of historical inquiry and not the dinner table.