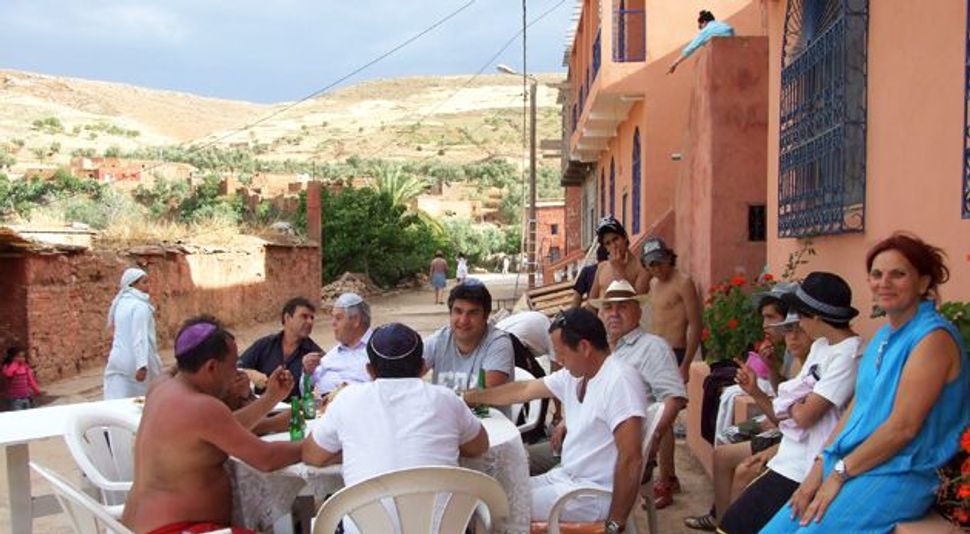 Holy Trip: Around 75 people traveled to the Dra?a area for the yearly ritual. Image by AlISON KlAYMAN

As our rundown Mercedes puttered past the olive groves and wheat fields of Morocco’s Atlas Mountains, our taxi driver, Mohammed, pulled off the dirt road to ask a shepherd for directions.

“Do you know how to find David Dra’a?”

I was skeptical that the Arab shepherd would be able to lead us to the tomb of an obscure kabbalist rabbi, but he knowingly pointed us forward, higher into the peaks.

Rabbi David Halevy, from the Dra’a area 60 miles northeast of Marrakech, is one of more than 600 tzadikim (righteous men) buried in Morocco who are recognized by local Jews as saints. My brother and I were looking for Halevy’s grave because this June weekend was his hiloula, when Moroccan Jews visit a tzadik’s grave to light candles and pray for health and prosperity, usually on the anniversary of his death.

Morocco lost more than 95% of its Jewish population to immigration in the past half-century. But many who have moved abroad return for hiloulas, like 32-year-old David Ruimy, a meat seller from Jerusalem who visits Morocco once a year to pray at Halevy’s tomb.

“The tzadik can perform miracles,” Ruimy told us when we arrived. Ruimy had an encyclopedic knowledge of the wonders Halevy had performed from beyond the grave. He said that the tzadik once visited a man’s dream to tell him to look in his cupboard. In the morning, the man found $200 there, exactly the amount needed to open his business. Another story was about a baby who was accidentally smothered under a pile of blankets. Her family rested her lifeless body on the tzadik’s grave, shut the door to the tomb and prayed. Minutes later, they heard her cries.

“That baby was my Aunt Bida,” Ruimy said.

Ruimy’s entire extended family was in attendance at this hiloula, continuing a 65-year-old tradition that began with his grandmother, who lived in Marrakech. His parents’ generation, the 14 brothers and sisters of the Sebbag clan who still live in Morocco, have been coming their whole lives.

“Many Jews have left Morocco, but my family stayed,” Ruimy said. “Now we probably make up around 90% of the people at this hiloula, but in the past we were just a small fraction. Twenty-five, 30 years ago, there would be almost five or six hundred people.”

The Sebbags’ success in Morocco is evident in the way they are investing in the *hiloula *site, turning the crumbling shacks into newly renovated vacation homes with fresh pink paint, flower planters and, most important, indoor plumbing. Unlike the Arab homes in the adjacent village, the rooftops here are crowned with Moroccan flags, an extra display of loyalty to the kingdom. The Moroccan Jewish community owns this land, which used to be occupied year-round by Jewish families and by a yeshiva just a few decades ago.

In the hours before the hiloula began, it felt like we were crashing a family reunion. Cousins ran in bathing suits down the path to the river, parents played cards and instructed Arab employees brought from Casablanca to help prepare the food. Hired local policeman watched over the group.

After the sunset, the air was electric with anticipation. People disappeared into the houses to change clothes. Ruimy returned, dressed in a brown djellaba, a traditional Moroccan loose robe with full sleeves and an oversized pointed hood. Many of his aunts and uncles were dressed similarly.

Jacky Kadoch, the usually severe-looking president of the Marrakech Jewish community, grabbed the microphone at the end of a 30-foot chord and transformed into the evening’s jaunty master of ceremonies. The hiloula head count grew to around 75 people, and latecomers who drove more than three hours from Casablanca filed into the plastic chairs in the front.

The hiloula began with an auction, first for the honor of opening the tomb and then for decorative candles to burn. The money goes toward the upkeep of the tomb, and a blessing was recited for the winner of each item. One at a time, Kadoch auctioned off 30 candles in French. “La première bougie! La deuxième bougie!” Each started with an opening bid of no less than 1,000 dirham ($125).

Wallets loosened with the nonstop flow of whiskey, and interludes of synthesized music in Hebrew and Arabic were broadcast over the mini public address system. Not surprisingly, most of the top bids came from members of the Sebbag family.

At one point, Daniel Sebbag, another of Ruimy’s uncles, created a ruckus on the sidelines when he whipped out his cell phone and all the children crowded around to look at the screen. He recently came on a private visit to the tomb and said the tzadik showed him an image, in the ashes of the fireplace, of an old man holding a baby. He took a photograph of the vision with his cell phone. His sister Bida, the woman revived by the tzadik as a baby, was particularly interested in seeing the picture.

“La dernière bougie,” the last candle, was finally sold after 1 a.m. The mood was a bit muted after everyone sat through the tiresome auction, but the gathering began to stir as people moved toward the reverberating sounds of singing, clapping and rhythmic drumming coming from those already inside the tomb.

The tzadik’s grave is at the top of the tomb stairs, covered by a dark-green marble slab. Behind that, a palm tree grows into a skylight. To the left is a small square fireplace carved into the wall. Young and old seemed practiced in the proper tomb-worshipping etiquette. The people all kneeled and pressed their foreheads to the marble, taking turns to solemnly toss their candles into the fireplace’s blaze. Many took pictures of the flames with cameras and cell phones.

Bida was one of the most enthusiastic participants. She whirled around in a shiny djellaba, banging on tables with henna-covered hands, and led the crowd in song.

“To your health,” she wished me in French. “May you be married, and have lots of babies, and have everything good come to you!”

Armed with simple white Sabbath candles, my brother and I took our turns at the fireplace to feed the flames. I came to the hiloula more out of curiosity than out of faith in the tzadik, but my gaze lingered for just a moment longer on the glowing fireplace, just in case he wanted to send me a message.

Alison Klayman is a freelance journalist and documentary filmmaker in Beijing.