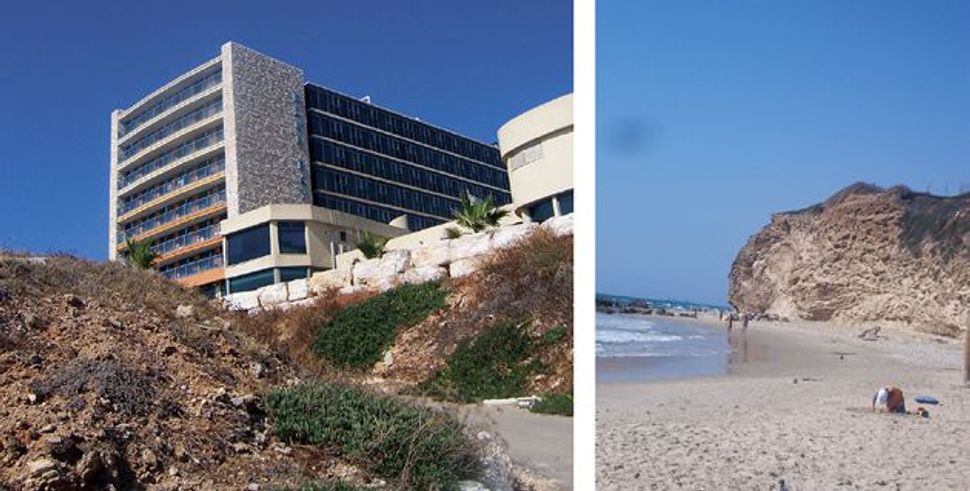 Cliffhanger: The Blue Bay Hotel, built atop a cliff near Netanya, and the beach near where dune rock collapse killed a camper. Image by NATHAN JEFFAY

A debate about whether construction along the Israeli coastline is playing a key role in causing more seaside cliffs to collapse has been reignited by the death of a camper whose tent was pitched below a sand pillar that crumbled.

Harel Barlin, 26, of Kfar Monash, was killed and another man was injured at about 3:30 a.m. on May 30, when part of the dune-rock cliff on a beach just north of Netanya collapsed, burying their tent in rubble. The avalanche of dune rock was widely reported as a natural disaster.

Some geologists say the signs that are posted along beaches should be enough to warn away people, and they believe that the collapses, which are becoming an increasingly common occurrence, though unfortunate, are overwhelmingly a natural phenomenon.

Others, while not disputing that erosion plays a large part in these collapses, contend that the construction of marinas at seaside or hotels at the edge of the cliffs has made them more likely to be unstable. “You can’t escape the fact that man’s actions play a role,” said Bar-Ilan University physical oceanographer Steve Brenner. Many on this side of the debate think that authorities should be erecting fences to stop people from venturing to the base of the cliffs as they walk along the beaches.

Later this summer, the Israeli government is expected to release its first comprehensive policy paper addressing what should happen to protect Israel’s 116 miles of seafront, including what measures should be taken to protect cliff-edge buildings.

Large sections of the seafront face what geologists call kurkar ridges — dune-rock cliffs that are formed from sedimentary products carried by the wind. They rise up to 164 feet above the beaches and have steep slopes, as much as between 75 and 90 degrees.

These cliffs are receding inland at a rate of about 8 inches a year, which is faster than in the past. Large waves reach the cliffs, and as they are eroded, they are more prone to collapse — a phenomenon seen several times in recent years. Last year, one collapse covered a beach near Herzliya with rubble and another near Hadera injured several people. In a typical year, one major and several minor collapses occur.

The Forward has learned that a 2006 report by the Geological Survey of Israel, the government’s geological research institution, identified Zukei Yam, the beach where Barlin died, as being at risk. The report acknowledged a link between building practices and the weakening of cliffs. Weakening happens “more intensely, because beaches are deprived of sand,” spokesman Ithai Gavriel told the Forward.

An important question, and one on which the GSI — a research-only body that steers clear of policy stances — is reluctant to commit to, is, just how much is it nature, and how much is it man?

Brenner thinks that the point raised in the GSI report is important. “I think that overall, man’s influence is playing a very major role in disrupting the flow of sediment,” he said, adding that it is “pretty clear” this contributes toward collapses.

In contrast, Haifa University geographer Micha Klein said he doubted the impact of the construction of marinas and similar structures. He said they are only a “minor” factor and affect sediments only in the nearby area. He believes that it is the natural processes of erosion that accounts for the weakening of cliffs, and that if man is involved, it is by helping to raise sea levels globally.

The authoritative study assessing the rate of recession of the cliffs was published in 2002 by Klein and another Haifa University scholar, Dov Zviely of the institution’s Leon Recanati Institute for Maritime Studies. While they agree on their statistics, their explanations and suggested courses of action are very different.

Unlike Klein, Zviely does not downplay man’s role in weakening the cliffs. And unlike Brenner, Zviely does not see man’s impact as chiefly through the building of marinas and other structures protruding into the ocean. Instead, Zviely believes that the problem lies in man’s love affair with a sea view.

While planning authorities today tend to dismiss applications to build close to the edge of cliffs, this was not the case until the 1990s, meaning that there are many homes and hotels that, for the sake of an unimpeded sea view, are located just a few feet from cliff edges.

Most scholars believe that the buildings themselves are potentially dangerous, as they would be destroyed if the cliffs they stand on gave way. But Zviely, an adviser to the Environment Ministry, asserts that “the cliffs have become weaker” due to the pressure from the buildings. He also contends that the watering of the buildings’ gardens causes the cliffs to become moister and therefore less stable, and that the interference with rainwater runoff can have negative consequences.

Along with release of the policy paper this summer, the government is understood to be mulling the option of building large walls at beach level in front of the cliffs, which would take the brunt of the waves. If this happens, it would mark a radical departure from the government’s traditional noninterventionist policy.

Though the sea walls would protect the cliffs and the buildings on them, the rub is that the waves will likely erode the beach instead. In government circles, the choice is seen as between economy, meaning the buildings on cliff-edges, or nature, meaning the beaches. It is thought to be highly unlikely that the government will limit building of marinas and other structures jutting into the sea.

The Environment Ministry, which is writing the government report, is tight-lipped about what approach it will take. A spokeswoman declined to answer questions posed by the Forward.

No matter what the government decides, more collapses are inevitable because construction of sea walls would be a lengthy process. This means that whatever the report concludes, a short-term question will remain: Should there be fences along the beaches to keep people away from the cliffs?