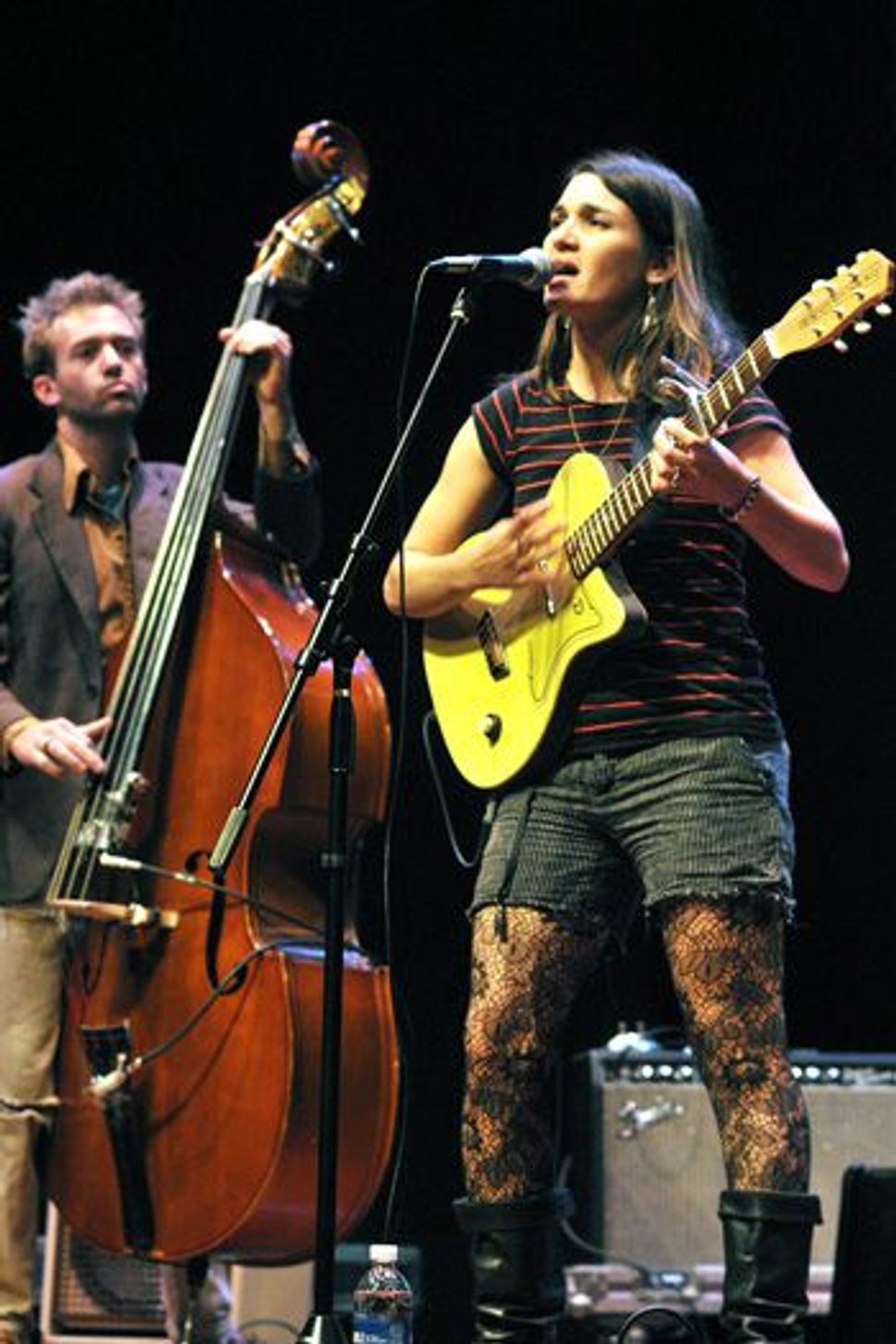 A tough room, lousy sound and half a band.

Given the poor hand she was dealt, it’s a testament to Alicia Jo Rabins’s onstage appeal that she came across as well as she did at a showcase for emerging Jewish performers presented June 17 at the Museum of Jewish Heritage — A Living Memorial to the Holocaust.

Rabins, who is best known as the violinist in the punk-klezmer outfit Golem, played a selection of self-penned songs from the forthcoming debut album by her new band, Girls in Trouble. Scheduled for release on the JDub label the day after Yom Kippur, the recording will feature a cycle of 10 songs about neglected biblical heroines. It’s an ambitious program: How often is the story of Yiftach’s daughter, whose father sacrificed her upon returning from war with the Ammonites, mined for indie-pop gold? And it deserved a better setup than the one it received that night at the museum. 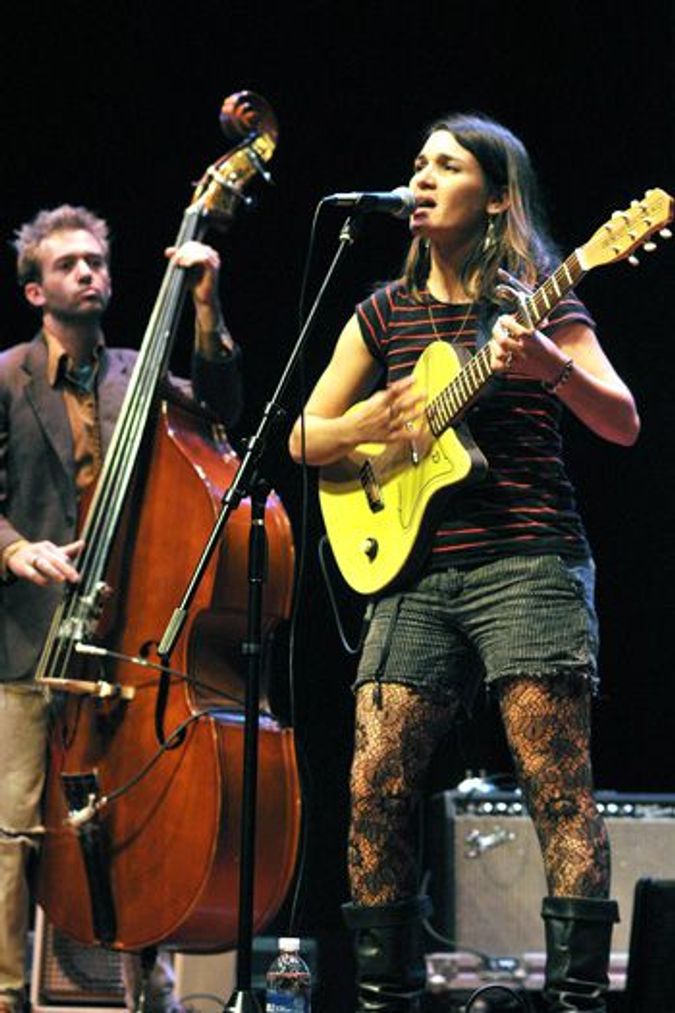 Ordinarily a quartet, Girls in Trouble performed as a duo, with Aaron Hartman of Old Time Relijun playing acoustic bass and Rabins alternating between violin and electric guitar. The drum and keyboard tracks were prerecorded, a puzzling move in a city as well supplied with musicians as New York, and one that made Rabins and Hartman look marooned on the large stage, an unmanned drum kit behind them. The room, which was far from capacity, was still lukewarm after a hit-and-miss opening set by comic Johnny Lampert. Worse yet, the acoustics were ill-suited to the more heavily amplified numbers and obscured some of Rabins’s carefully crafted lyrics. Still, by the time she wrapped up things with “Hunter,” which revisits the story of Samson and the lion from the perspective of the Philistine woman with whom the Jewish strongman slept, Rabins pretty much had the crowd in the palm of her hand, the evening’s inadequacies all but forgotten as the petite singer/songwriter/musician looped and layered both pizzicato and bowed violin lines to create an entrancing one-woman string quartet.

Rabins began writing the material for Girls in Trouble as a way of avoiding work on her master’s thesis in Jewish women’s studies for the Jewish Theological Seminary. “I’m really a poet,” said the Brooklyn resident, who spent several years teaching Hebrew school in Massachusetts and recently completed her Master of Fine Arts degree in poetry through Warren Wilson College. “I don’t like writing academic papers.” She was, however, interested in exploring midrashic portrayals of women and music. “I wanted to see whether the rabbis had a generally positive or negatively skewed vision of women and music,” she explained. So her thesis adviser suggested she write a set of songs on the subject, rather than a conventional research paper.

The three tunes she wrote for her thesis were all acoustic — Rabins recorded them in her apartment, playing the ukulele, violin and guitar parts herself — and told the stories of Jacob’s daughter, Dinah, whose rape was preceded by singing and dancing (Rabins drew heavily on the version of the tale that Anita Diamant presented in the novel “The Red Tent”); Job’s daughters, who played musical instruments to shepherd their father’s soul from his body, and Yiftach’s unfortunate offspring. But Rabins found herself compelled to continue writing long after she handed in her thesis project. “I just wasn’t ready to stop at those three characters,” she said. “There were others calling to me, telling me to write their songs.” And so she did, crafting songs about Miriam’s bout of leprosy, Samson’s nameless Philistine and the sotah, or suspected adulteress, who was tested with bitter waters — each one told from the perspective of the female heroine.

She also switched to an electric format from an acoustic one, updating the arrangements accordingly and arriving at a style she likes to call “art-pop.” It’s as good a name as any for an eclectic sound that blends elements of hard rock, sweet pop and classical music, yet betrays nary a trace of Jewish melodic influence despite the unremittingly biblical lyrics. “I didn’t want it to sound too Jewish,” Rabins said. “These are songs about the human experience, and I want people to relate to them as human beings.”

Perhaps most surprising is the fact that listeners can relate to the songs at all, given their esoteric references. Few people will recognize Rabins’s characters — only one man in the audience at the Museum of Jewish Heritage was able to identify the sotah as the subject of the song “Secrets” — but the music is so compelling that this hardly matters. “My dream is that people will respond to the songs and then be drawn to the stories,” she said.

If my own frantic Googling of Rabins lyrics following the show is any indication, that dream might well come true.

Alexander Gelfand’s work also has appeared in The New York Times, The Economist and Wired News. A recovering musicologist, he lives in Queens with his wife and two children.