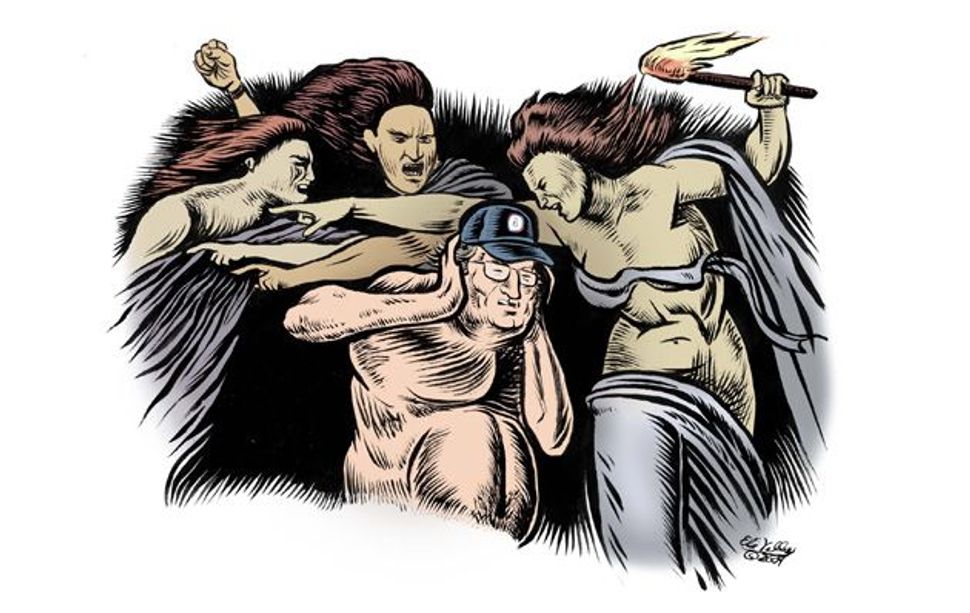 Image by ELI VALLEY, AFTER BOUGUEREAU?S ?ORESTES PURSUED BY THE FURIES?

Joseph Stalin once said that a single death is a tragedy; 1 million, a statistic. The same is true, it turns out, for financial ruin.

Whether the final tally turns out to be $16 billion or $65 billion, the sheer enormity of the fraud perpetrated by Bernard Madoff is too abstract for anyone other than Bill Gates or Warren Buffett to appreciate.

But in the Manhattan courtroom of U.S. District Judge Denny Chin on June 29, at least for one solitary moment, the individual pieces of Madoff’s towering Ponzi scheme were visibly and heartbreakingly revealed as human beings. And the world saw that ordinary people think in terms of small pensions, the preservation of nest eggs and saving for rainy days.

Meanwhile, outside the courthouse, hundreds of photographers seemed to be on reassignment from the West Coast vigil surrounding Michael Jackson’s autopsy report.

Satellite dishes atop news trucks and helicopters circling overhead gave Foley Square the atmosphere of a summer circus — although with an entirely different assortment of clowns. Even passersby held up cell phone cameras in case someone famous, or better yet, infamous, was in range of a snapshot.

But the real story was inside the courtroom, which became a sanctuary for the grief stricken and the awe struck. Scores of Madoff’s victims sat beside one another, strangers except for the solidarity of a multi-billion dollar swindle.

There was enormous emotional intensity throughout Madoff’s sentencing proceedings. Courtrooms, after all, are places of great human vulnerability, even though the legal system often strips citizens of the natural and necessary emotions that draw them to seek justice in the first place.

Fortunately, Chin used this occasion to allow victims to speak openly, plainly and without interruption about the devastating toll that Madoff’s crimes have taken on their lives.

Of the several hundred victim statements that the judge received, nine people were called upon to speak, although many others sat in the courtroom, silently rooting, awash in their own anguish. 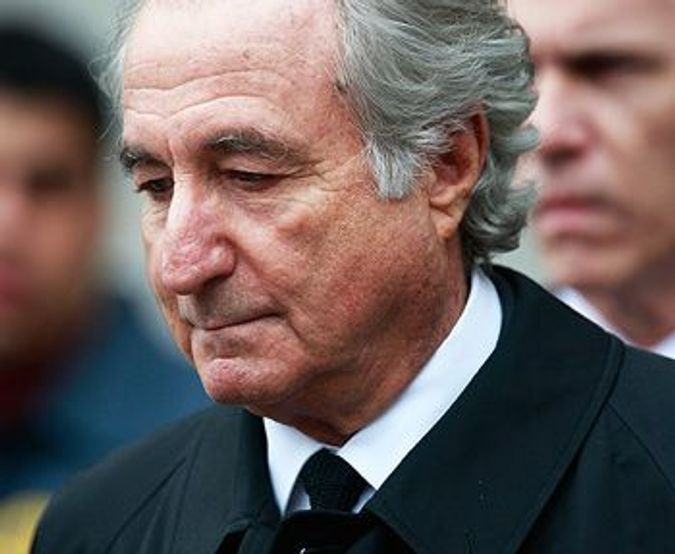 Banished: Even before his jail sentence, Madoff had been exiled from this world. Image by GETTY IMAGES

One couple who lost their entire life savings said that Madoff had “imprisoned us by taking away our freedom.” Another couple complained that Madoff—“this evil lowlife”—had shown no remorse and that his Ponzi scheme should be considered a “violent crime.” Many spoke of unpaid bills and lost homes, dreams deferred and sleepless nights. Everyone mentioned an incalculable worry and fear of the future. There were common themes: college tuition, the care of elderly parents and the inability to assist family members with their own financial troubles. One woman lamented that she no longer would be able to donate to her favorite charity.

They each read from prepared texts, but these scripts did not prepare them for those halting moments when words were replaced by tears.

Most spoke of having lived frugal and financially prudent lives.

Madoff’s victims, at least those who addressed the court, neither emulated his lifestyle nor flaunted their wealth. Madoff may have targeted both the rich and the middle class, but the court heard from those who didn’t own yachts or join fancy country clubs.

Some were forced to return to work, their retirement fleeting and interrupted. A physical therapist blamed governmental regulatory agencies for failing to detect Madoff’s fraud. A woman who had worked as a model said that Madoff had “killed my spirit and shattered my trust in people.” And a young man in his early 30’s worried not for himself but about caring for his mentally disabled brother.

When it was time for Madoff to address the court, he offered no excuses, nor did he seek forgiveness. He was simply unable to accept that he had failed, Madoff related, and so he allowed his fraud to continue. Yet, he did not admit that all the while, he had enriched himself with other people’s stolen money.

In a moment like this, the literature of torment is always revealing. It was no surprise, then, to hear victim Burt Ross, the former mayor of Fort Lee, N.J., invoke Dante, condemning fraud as “the worst of sins, the ultimate evil,” and consigning those who commit fraud to the lowest depths of hell.

With disgust, Ross noted also that Madoff “sank so low as to steal from Elie Wiesel, as if Wiesel hasn’t suffered enough in his lifetime.” It was, fittingly enough, Wiesel himself who conjured a vision of torment for Madoff to match Dante’s. Asked last February what punishment he would like to see for him, Wiesel proposed a TV monitor in Madoff’s solitary cell running continual footage of Madoff’s victims, suffering the consequences of his misdeeds and their forever damaged lives.

Madoff’s sentence is, perhaps, a 21st-century version of the ancient Greeks’ vision of the unceasing torment suffered by the world’s most tragic sinners, pursued by the Furies, forever haunted, until they go insane and die.

It may be that Madoff is already beginning to feel their presence. He acknowledged in his brief remarks that he now lives in a “tormented state.” His lawyer, Ira Lee Sorkin, reminded the court that his client, while admittedly the cause of so much devastation was, nonetheless, still a human being and, most assuredly, a deeply flawed one. But what does that mean? All human beings are flawed, but not all would have resorted to such depraved, despicable conduct as his client had. Sorkin seemed to be adopting Hannah Arendt’s “banality of evil” argument, applying it not to Adolf Eichmann but to Bernard Madoff, a mass murderer not of lives, but of livelihoods.

In accepting the government’s request for the maximum penalty — 150 years — Chin insisted that symbolism was important even though Madoff never would see the year 2159. The standard, the judge ruled, was the degree of “moral culpability.” Madoff should receive the sentence he deserved, regardless of his present age. Moreover, the judge disagreed with Madoff’s attorney that the victims—all of whom had urged the court to impose the maximum allowable sentence—were resorting to mob vengeance. On the contrary, they placed “their trust in the system of justice,” which is exactly the opposite of vengeance, the judge said.

Is there anything redemptive that can be said of Madoff? After all, he spared the world a trial, never proclaiming his innocence or insisting on his right to a jury of his peers. Perhaps he realized that no jury pool would cop to being among his peers.

Indeed, Chin noted the absence of any letters written in support of Madoff, attesting either to his good deeds or fine character.

He is a man utterly friendless and alone. His victims can take comfort in knowing that even without a jail sentence, Madoff already has been banished from this world. Even his wife, Ruth, is being treated with revulsion and disgust. Her life sentence, in both high society and the court of public opinion, already has begun.

And yet, among the 11 counts of criminal activity, Madoff will not end up serving any jail time for reinforcing an ugly stereotype — the pernicious connection between Jews and money. He admitted his guilt for committing fraud, but not for defaming Jews, for resurrecting a blood libel with a grotesquely contemporary twist: the commingling of Christian and Jewish blood not for the making of matzo, but for the losing of money.

No doubt books are being written that will offer theories on Madoff’s unique pathology. Was he a sociopath or a garden-variety Ponzi schemer, enhanced with superior social connections and a truly authentic devilish demeanor? But perhaps everyone has forgotten that long before Wall Street, Madoff worked as a lifeguard at Rockaway Beach. The rescue skills that helped him earn his first $5,000 were somehow forgotten during his career in finance, in which thousands of people ended up drowning in debt, without a lifeline.

Thane Rosenbaum, a novelist, essayist and law professor, is the author of “The Myth of Moral Justice.”