Mrs. Goldberg: ‘The Oprah of Her Day.’ 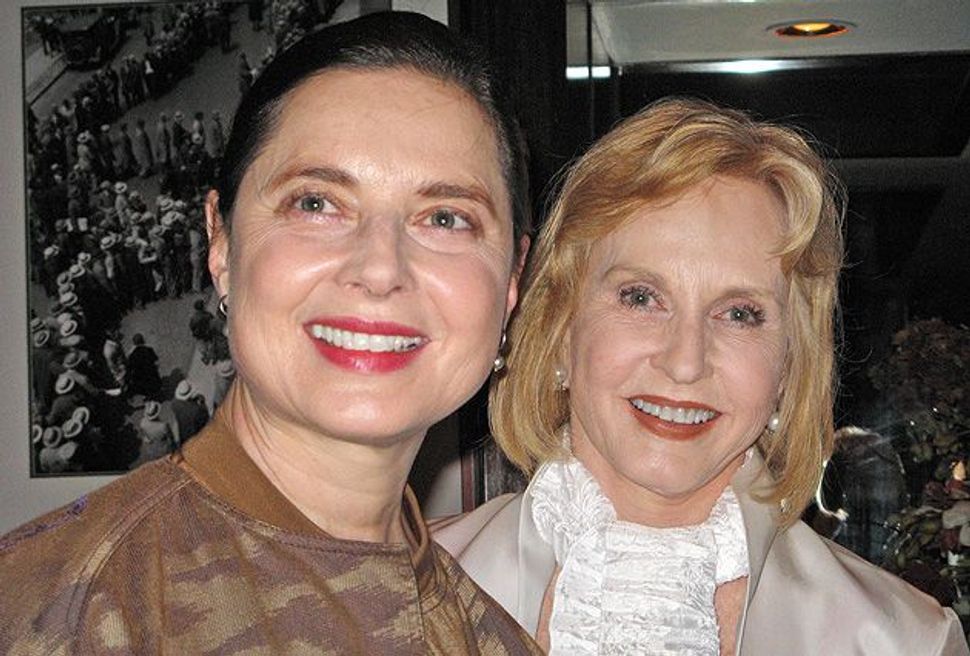 Award-winning filmmaker Aviva Kempner told the 92nd Street Y audience at the June 25 screening of her latest documentary, “Yoo-hoo, Mrs. Goldberg,” that when she mentioned Gertrude Berg to Fran Drescher, the response of “The Nanny” was, “Who was Gertrude Berg?” There was a communal gasp. “She was the Oprah of her day,” says one of the “talking heads” in the film. “She invented the template for the sitcom,” paving the way for “I Love Lucy” and others that followed. And wait until you see the film and hear what Supreme Court Justice Ruth Bader Ginsburg has to say about the impact that “Mrs. Goldberg” had on her family and childhood. Opening July 10 at the Lincoln Plaza Cinema, it is a must-see. Imagine a woman who wrote and acted in 12,000 radio scripts… who created a show portraying Jews in a positive light; hired Jewish actors, including Menasha Skulnik, and to counter Hitler’s rants, presented a Passover Seder on the air. “She was the most famous woman in America you’ve never heard of,” a press release notes.

The post-screening question-and-answer session between Kempner and Annette Insdorf, director of undergraduate film studies at Columbia University, disclosed a number of Goldberg gems. According to a poll, she was “the second most respected woman in America, after Eleanor Roosevelt.”  She was a genius at product placement and a savvy product pitch woman. “Was she religious?” Insdorf asked. It seems that Gertrude Berg, the iconic American Jewish mother, the keeper of the flame, according to Kempner, “celebrated Christmas” and lived elegantly on Park Avenue. She brought a Bronx family — that happened to be Jewish — into the living rooms of America. And they welcomed and loved her! So, if younger members of your family, friends or neighbors have heard of Gertrude Berg, here’s a chance for them to discover one of America’s media trailblazers whose impact still resonates on TV screens worldwide.

“There are actually people in Washington who travel the high road of principle… where there is little traffic,” said Brent Scowcroft, a retired lieutenant general of the United States Air Force, at the May 21 Salute to Freedom Award dinner aboard the Intrepid Sea, Air & Space Museum. “Friends in Washington are [those] who stab you in the chest,” joshed Snowcroft, who was a national security adviser to presidents Gerald Ford and George H.W. Bush. Snowcroft presented the 2009 Intrepid Freedom Award to U.S. Secretary of Defense Robert Gates. Among the 1,000 black-tie and uniformed guests were Barbara Walters; New York City Police Commissioner Raymond Kelly; NYC Council Speaker Christine Quinn; Admiral James Stavridis, American and NATO commander in Europe, and David and Simone Levinson, who the day before had hosted a Fleet Week reception at their elegant Manhattan townhouse.

Gates, who was honored for his lifetime of service to the nation, said: “The wounded warriors who stepped forward are today’s heroes…. After the wars of Afghanistan and Iraq, I have no higher priorities than to care for our wounded.”

One of the heroes Gates applauded, in absentia, was Army specialist Zachary Boyd, a soldier who had made the front page of The New York Times. In the photo, Boyd was shown wearing unusual attire as he responded to an attack in eastern Afghanistan. “Any soldier who goes into battle against the Taliban in pink boxers and flip-flops has a special kind of courage,” Gates declared, to thunderous applause. Also honored were the children of Alonzo Swann, a heroic African-American sailor who earned the Navy Cross for service aboard the Intrepid in 1944, but due to “political challenges of the times” did not receive the medal until 1993. Among the evening’s major speakers were Intrepid Sea, Air & Space Museum president Bill White and its co-chairman Charles de Gunzburg.

To tout the new “Pia Lindstrom Presents,” on SIRIUS XM’s Book Radio channel, a reception was held May 26 at Morton’s the Steakhouse. All three of Ingrid Bergman’s daughters — Pia Lindstrom; Ingrid Rossellini, an adjunct professor of Italian Renaissance literature at New York University, and her fraternal twin, film star Isabella Rossellini, were present. After congratulating Lindstrom on her new role as interview host, I sought out Isabella Rossellini, whose most recent film is James Gray’s “Two Lovers.” In the movie, she portrays Ruth Kraditor, a Russian-Jewish émigré living in Brooklyn’s Brighton Beach. “You have played Jewish women in other films,” I said, citing the 1998 Holocaust-related film “Left Luggage,” in which she co-starred with Topol and Maximilian Schell. In body language reminiscent of her late mother, Rossellini tilted her head and then gave me a mega-watt smile… but had no comment.

Later, I wended my way through the crush of guests to say good night to Lindstrom and exchange pleasantries with some of her well-wishers: Ted Chapin, Cece Black, Maria Cooper (Gary Cooper’s daughter), Magee Hickey and Ben Gazzara.

Mrs. Goldberg: ‘The Oprah of Her Day.’