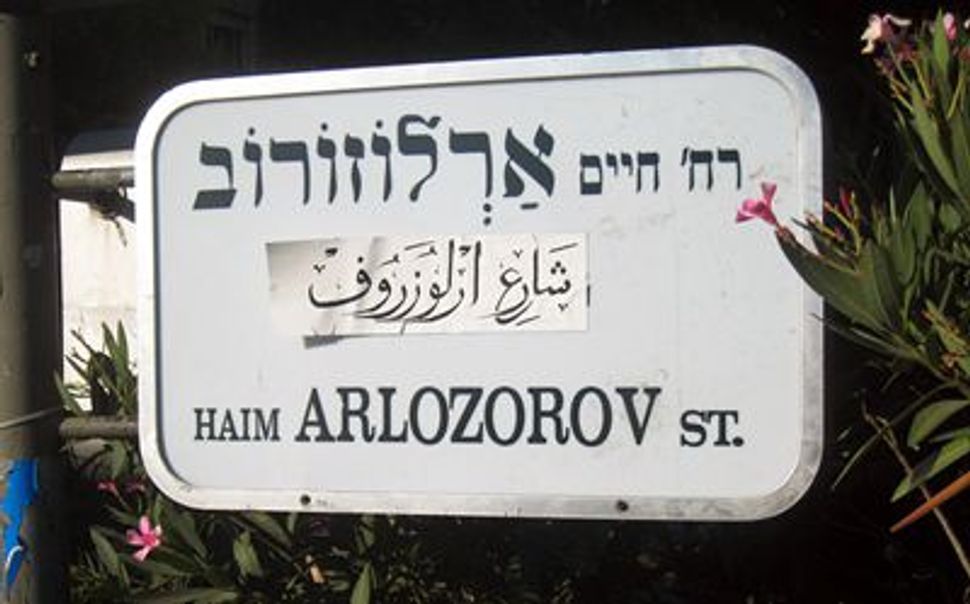 Signs of Conflict: A group has placed stickers with florid Arabic calligraphy on Israeli street signs that had been vandalized. Image by DANIEL ESTRIN 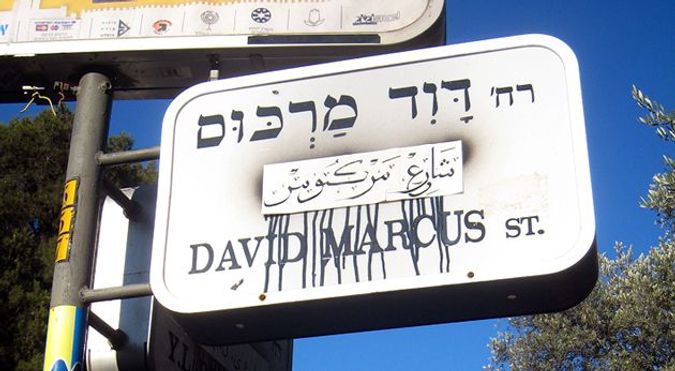 What?s In A Name? After ultra-nationalists painted over Arabic lettering on this Jerusalem street sign, a new group of vigilantes restored it. Image by DANIEL ESTRIN

On a recent night in this ethnically divided city, an Israeli and two American Jews patrolled the streets, armed with a ladder, adhesive spray and a pile of handwritten placards. Every few minutes, they hopped out of the car, slapped a sticker onto a road sign and snapped a picture.

Their operation, which has taken place four times since May, is aimed at countering ultra-nationalist vandals who had defaced the Arabic lettering on Jerusalem’s street signs. Over that vandalism, the new vigilantes, with a more pluralist vision of Israel, have put up stickers with large, flowing Arabic calligraphy spelling out the street’s name.

“It’s a public service,” said Romy Achituv, the Israeli behind the wheel, before speeding off to the next sign on the checklist.

So far, the “maintenance group,” as they call themselves, has gone out four times at night and attended to around 50 signs. The $100 or so that this has cost has come from their own pockets.

It’s the latest move in an ongoing graffiti war that has transformed Israel’s road signs into ideological battlefields. The conflict began in 1999, when an Israeli court ordered Arab-Jewish cities to include Arabic translations on street signs in addition to Hebrew and English. In the years since that order, anti-Arabic vandalism has appeared in mixed cities, such as Akko, as well as on highway signs throughout the country — but it is said to be most prominent in Jerusalem. There, residents have grown used to the Arabic translations of “Jehosaphat Street” or “Slow” being blotted out by black spray paint or covered up in ultra-nationalist bumper stickers. 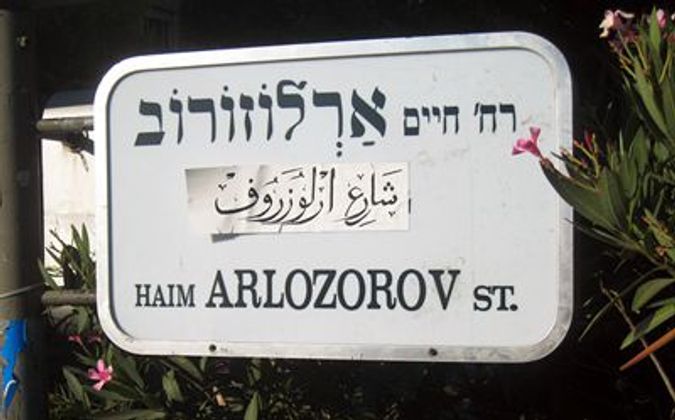 Signs of Conflict: A group has placed stickers with florid Arabic calligraphy on Israeli street signs that had been vandalized. Image by DANIEL ESTRIN

“In Jerusalem, you have a lot of nationalists who do not accept the very existence of Arabs,” said Sammy Smooha, an Israeli political sociologist at the University of Haifa. “Arabic signs give them the feeling of binationalism, that the Jews have no exclusive monopoly on the town.” Achituv and others on his team contend that Israeli authorities have been uninterested in dealing with the defacing of the Arabic signs.

“The police are not working against this phenomenon,” said Abber Baker, who is an attorney with Adalah, an Arab rights group that petitioned for the Arabic lettering on street signs. “People are not deterred, because there is no accountability. It is never reported as a big issue we need to fight as a state matter.”

Besides the anti-Arab messaging implied in the vandalism, the covered-up Arabic poses a very practical problem for taxi drivers like Muhammed Dabash.

“When I need to take a passenger somewhere, I read the Arabic on the street signs,” Dabash told the Forward.

A Jerusalem policewoman patrolling near a sign pointing to Tel Aviv on which the Arabic had been marked out said she had not noticed the vandalism and that she was not responsible for dealing with such incidents. Stephen Miller, spokesman for Jerusalem mayor Nir Barkat, said the city was working to improve its handling of graffiti and other sanitation issues.

“In a city of 800,000, there’s going to be graffiti,” Miller contended, adding that the vandalized road signs are “isolated incidents.”

The vigilante effort to fix what the municipality had not was initiated by Ilana Sichel, who became bothered by the extremist graffiti while spending the year in Jerusalem on a social justice fellowship given by the New Israel Fund and Shatil. Sichel enlisted the help of Josh Berer, a New Israel Fund fellow who previously studied traditional Arabic calligraphy in Yemen, to write the Arabic placards.

“This is fundamentally an issue of decency and neighborliness,” Sichel said.

“We’re talking about equality and talking about respecting different cultures,” she said. “The strength of these fellows is just amazing, to keep on doing this.”

Sichel and her crew have made repeated trips to some signs after some of their stickers were ripped off. In one instance, they found a road sign that had been completely cleaned, with no trace of any kind of graffiti or stickers, theirs included. Sichel thought it might have been the municipality, but when she reported to a left-wing activist e-mail list what had happened, a fellow vigilante named Udi replied that he was the one who restored the street signs to their original look.

“I really think you are mistaken,” Sichel wrote in a polite but impassioned e-mail exchange in which she argued that erasing all traces of graffiti hid the real problem. Udi countered that cleaning the street signs was the ultimate goal.

On another front, the group asked the Shalom Hartman Institute, a Jewish research institution that operates a religious high school, to patrol its own vandalized road sign after Sichel reaffixed the Arabic sticker on the sign for the fourth time.

In the meantime, the vigilante maintenance crew invites visitors to Jerusalem to catch a glimpse of the Arabic calligraphy adorning the city’s street signs while they can. It is likely to be a temporary exhibit.