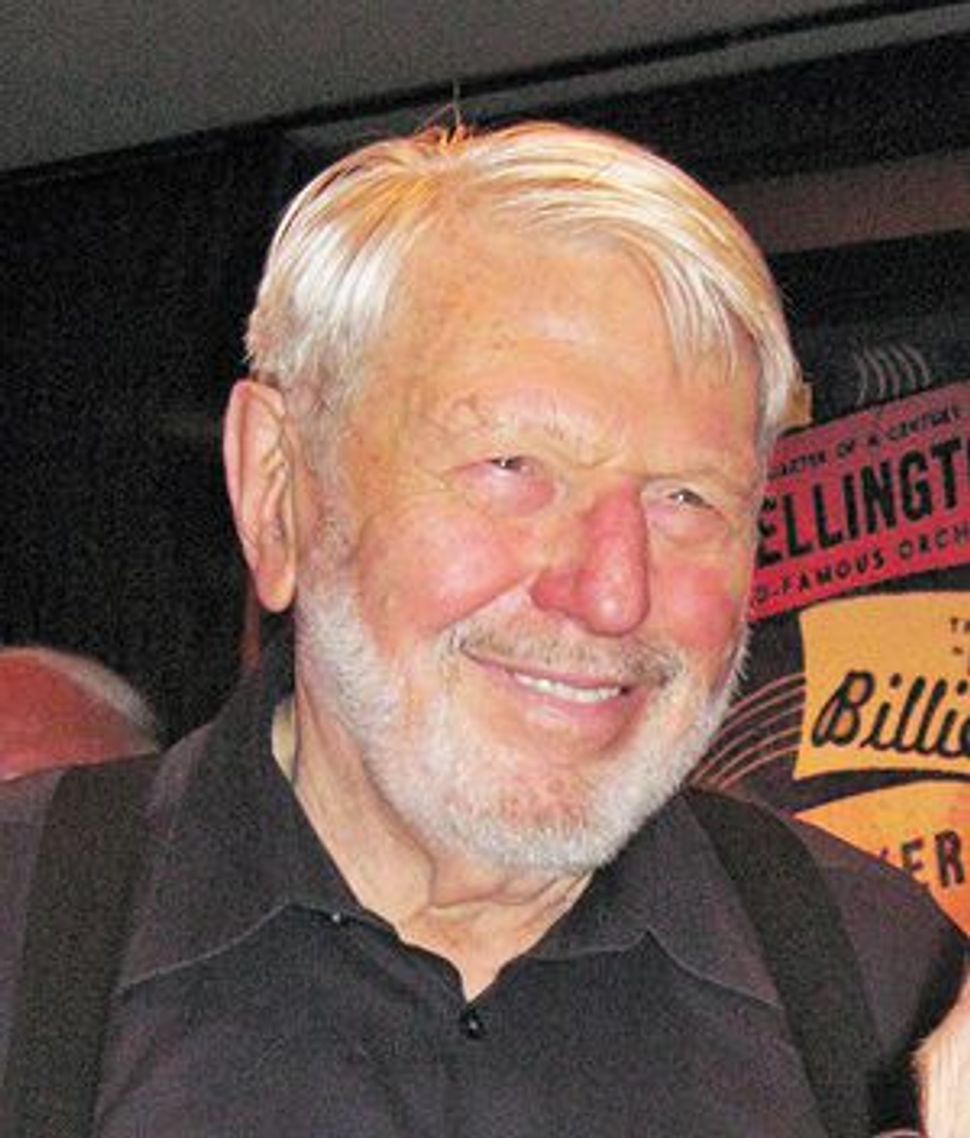 “Whenever I’m asked what I’d like for a birthday present,” actor, singer and activist Theodore Bikel said, “I am quick to say, an evening with friends. A party where we will make music.” And that’s just what Theo, as his friends call him, got on June 15 for his 85th birthday — a concert with friends at Carnegie Hall. The lineup of performers included Alan Alda, Arlo Guthrie, Judy Kaye, the Klezmatics, Hankus Netsky, Eddie Krakauer, Peter Yarrow and Paul Stuckey. Composer, arranger and pianist Artie Butler recalled that when an 85-year-old George Burns was asked, “What do you think about life?” he replied, “I think the second half will be better.” Tall, vigorous, rosy-cheeked and dressed all in black, Bikel mused about “the gossamer texture” of performance, “which disappears when the theater closes. These are my weapons — poetry and song. I am grateful that tonight all these worlds intersect.” 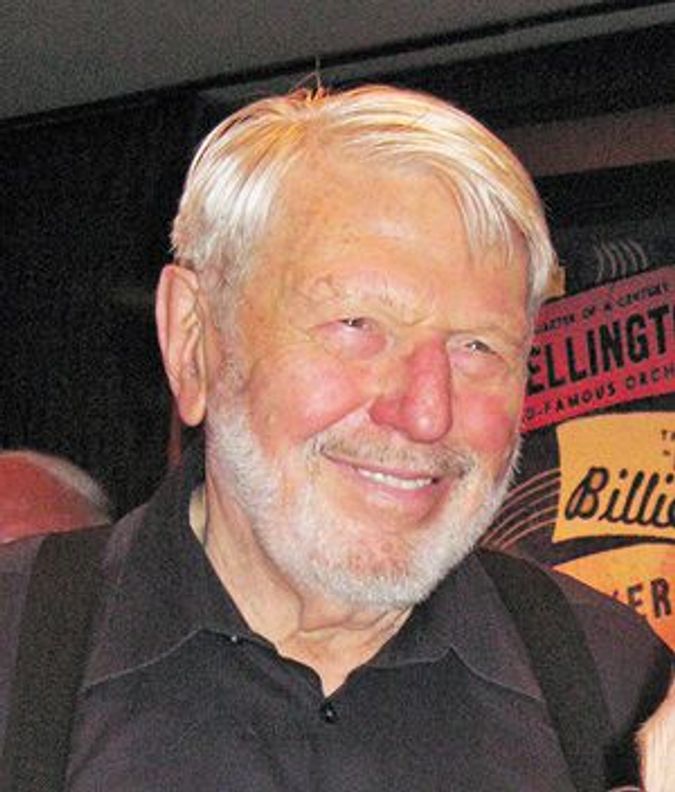 “I’ve never said this before: Words fail me,” Bikel told the audience. “People tell me I touch them. In return I am touched.…What counts is the journey itself, not the end of the journey.” Bikel acknowledged representatives in the audience from theater, film, TV, opera and Variety, and “the sole representative of dance, Chita Rivera.” He noted that the event was for the benefit of Juvenile Law Center. With his wife, internationally acclaimed conductor and pianist Tamara Brooks, at the keyboard, Bikel sang in Yiddish Zol Zein (“Let It Be So”). Poignantly he performed Jacques Brel’s “Le Chanson des Vieux Amants” (“The Song of Old Lovers”). In Yiddish he sang “Lomir Beyde a Libe Shpiln” (“Let Us Both Play at Love”).Yiddish maven Michael Wex, author of the best-seller “Born To Kvetch,” which contains the Galitzianer articulation of the language, performed a shtick about his father, who loved western Alberta, Canada, and wanted to be “The Yodeling Mohel.” White-haired Guthrie and the Klezmatics revved up the temperature with their rendition of “St. James Infirmary Blues.” For the finale, everyone on the Isaac Stern Auditorium/Ronald O. Perelman Stage, plus those in the seats, sang the refrain “Those were the days my friend, we thought they’d never end….” It was a concert for all ages.

“What a delight to be at this amazing party in celebration of 85 years and in unabashed and joyful support of Juvenile Law Center,” Bikel said. “Those who know me know I use my voice and whatever talents I have in the service of causes in which I believe. My passions, both as an artist and as an activist, are informed by a conviction, instilled in me by my father, that those who are voiceless and powerless must be empowered by men and women who have the voice and eloquence to speak on their behalf. Juvenile Law Center does just that by protecting the rights and welfare of vulnerable children…. This is called tikkun olam, a concept that originated with the 16th-century kabbalist Isaac Luria. It roughly means ‘making the world better.’ It is my task. It is Juvenile Law Center’s task. It is our task.’”

CALVARY HOSPITAL TOUTED AS AN OASIS OF COMPASSION AND CARE

“I am the third generation to serve patients at Calvary,” Rabbi Charles Rabinowitz told me at the June 3 Calvary Hospital Awards Gala, held at The Pierre. For the full story, the rabbi suggested I call him after the dinner. He explained: “Too often, our patients come to us feeling so dehumanized, the result of invasive and soul-numbing treatment…. Rabinowitz said. “At Calvary, our job is… to love our patients so much that they cannot, for a minute, believe they are alone and forgotten.” While presenting the Calvary Medal to Charles Groppe an attorney at Putney, Twombly, Hall & Hirson LLP, the Rev. Timothy Dolan, archbishop of New York, said, “You don’t have to believe in God, but you can live as though there were one.” The Women of Calvary, a Catholic lay organization of widows dedicated to serving poor, desperately ill women, founded Calvary in 1842. Today, 10% to 15% of Calvary’s patients are Jewish. The hospital’s brochure notes that Calvary “is a gold standard hospital [hospice, palliative care center] unlike any in the U.S. or the world.”

Hosted by “Today” co-host Al Roker, whose father died of lung cancer in 2001 at Calvary, the program included greetings from Calvary’s president and CEO, Frank Calamari, and an award presentation to the American Institute of Architects’ John Decina, CEO of Barr & Barr, Inc., by Calvary’s chairman of the board, Dr. **Thomas Fahey Jr., medical director of international programs at Memorial Sloan-Kettering Cancer Center. An informative, upbeat and comforting video touted Calvary’s mission.

My post-dinner conversation with Rabinowitz about his multigenerational Calvary connection would make a great Yiddish theater vignette. The rabbi said: “Just two weeks after I started at Calvary, I visited a 96-year-old woman who was dying of cancer. Despite her frailty, when I went into Golda’s room, she nearly jumped out of her bed. ‘Rabbi! What was your grandfather’s name?’ I told her and asked what was wrong. ‘Rabbi! My grandmother died at Calvary many years ago, and your grandfather cared for her. And my mother died at Calvary 30 years ago. And it was your grandfather who cared for her…. Now here I am again at Calvary, and you walk in! It must be bashert [fate], because you are here for me…. If you are little Charlie Rabinowitz, sing for me, as I remember you used to sing.’” Rabinowicz paused: “In an instant, 44 years fell away and I was reminded that when my father was on call as a rabbi for Calvary Hospital, he would sometimes bring me with him on rounds. And when a patient needed spiritual uplifting, Father would say to me, ‘Charlie, sing to Mrs. Grossman,’ or, ‘Charlie, sing Mr. Cohen’s favorite song.’ With my 8-year-old warble, I would sing the old songs, and the patients would smile.”

“Elie Wiesel once posited, ‘I have a naive belief that the cure for cancer will come from Israel,’ said Harriet Elisofon, ICRF president, at the June 10 Women of Action Evening, held at the Jewish Museum. It’s possible. To date, ICRF-funded basic research led to the cancer-fighting drugs Doxil, Gleevec and Velcade. Two of ICRF’s grant recipients, Avram Hershko and Aaron Ciechanover, won the 2004 Nobel Prize in chemistry. One of the evening’s honorees, Judge Jeanine Pirro, said: “My dad died of cancer. My mother, Esther, is fighting colon cancer…. We need to think, there but for the grace of God, go I.” Adding a light touch to the event was guitar-playing Yarrow of Peter, Paul & Mary fame. “Thanks to you, Mary Travers [who was diagnosed with leukemia] no longer has cancer; she had a [bone marrow] transplant.” After Yarrow got the audience to join in singing “Puff, the Magic Dragon,” criminal attorney and master of ceremonies BenjaminBrafman joshed, “Puff” is my client Puff Daddy, and this is the first time I listened to this song without smoke filling the room.” He clarified his remark: “As a young lawyer, I used to go to [Peter, Paul & Mary] concerts, handing out my card.”“We don’t build buildings, we don’t do advertising, we do research,” Brafman said. “There are people in this room who are alive because of what this organization did… and that includes my wife.” Shunning the microphone, award recipient Charlotte Frank, a senior vice president of research and development for McGraw-Hill Education of The McGraw-Hill Companies, harked back to her education roots and declared: “If you have been in schools [as I have], you never lose your cafeteria voice! We have a commitment [to] invest in basic science in Israel…. Bone marrow transplant was developed at the Weizmann Institute with ICRF dollars…. God can’t be everywhere; that’s why She gave us ICRF.”In her acceptance speech, Pirro, the first woman to sit as a judge in Westchester County, N.Y., recalled: “Every Saturday, my mother, who was a woman of action, sent me across the street to wash Mrs. Fleming’s hair [because] she could not raise her hands…. At 6 I decided to be a lawyer and fight for the underdog. For me, the underdog was a woman brutalized by her husband, a child brutalized, [someone] targeted because of the color of their skin or ethnicity…. We have an obligation to do good work…. Silence helps the tormentor, not the tormented…. I became a judge because justice had to be dispensed to the victim.” Putting the spotlight on ICRF’s chairman, Dr. Yashar Hirshaut, Pirro said: “There are at least a dozen women [here] alive because of him…. You walk into his office, and there are 50 women there, all who were given the same 10 a.m. appointment.” Pirro, who has appeared on CNN, “Today” and “60 Minutes,” now has her own syndicated television court show, “Judge Jeanine Pirro.”

Also honored was Dr. Ruth Oratz, associate professor of clinical medicine at the New York University School of Medicine and a Fellow of the American College of Physicians. Oratz specializes in treating women who have breast cancer. She is chair of the medical advisory board of Susan G. Komen for the Cure, Greater New York City Affiliate and a medical consultant to Cancer Care. The event’s special guest was Dr. Ephrat Levy-Lahad, director, of the medical genetics unit at Jerusalem’s Shaare Zedek Medical Center. Levy-Lahad spoke about research involving breast cancer among Ashkenazic women.