The Pickle: No Second Fiddle 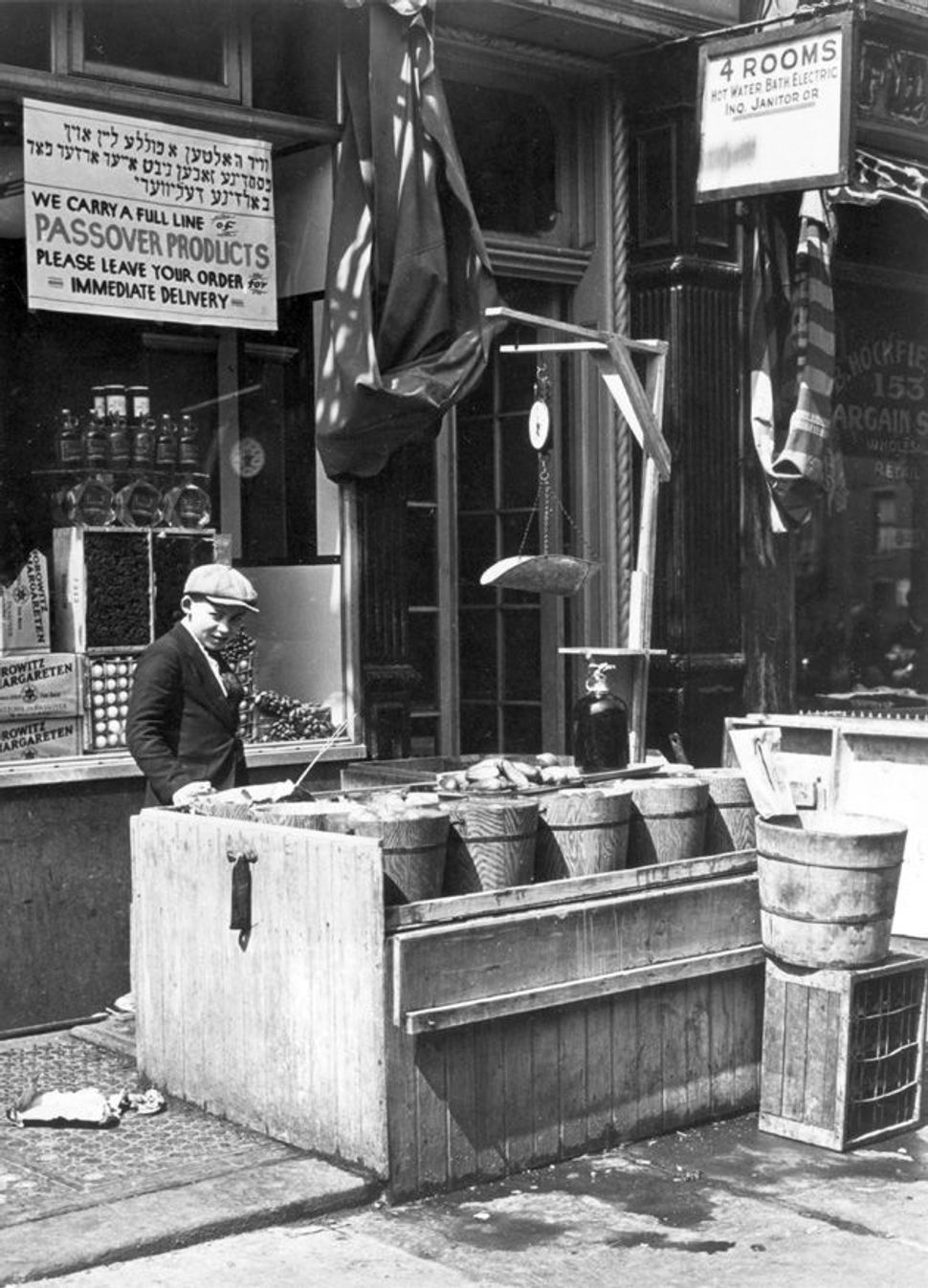 Oh, the poor, humble pickle. Whether lying next to a hamburger or slipped as an afterthought into tuna salad, pickles routinely play second fiddle in American cuisine. Of course, with its greenish complexion and homely bumps, the fermented cucumber hardly qualifies as leading lady material. Still, something feels amiss when the pickle is not around. What good is falafel without that extra hit of something sour? Or pastrami without a few kosher dills parked nearby? 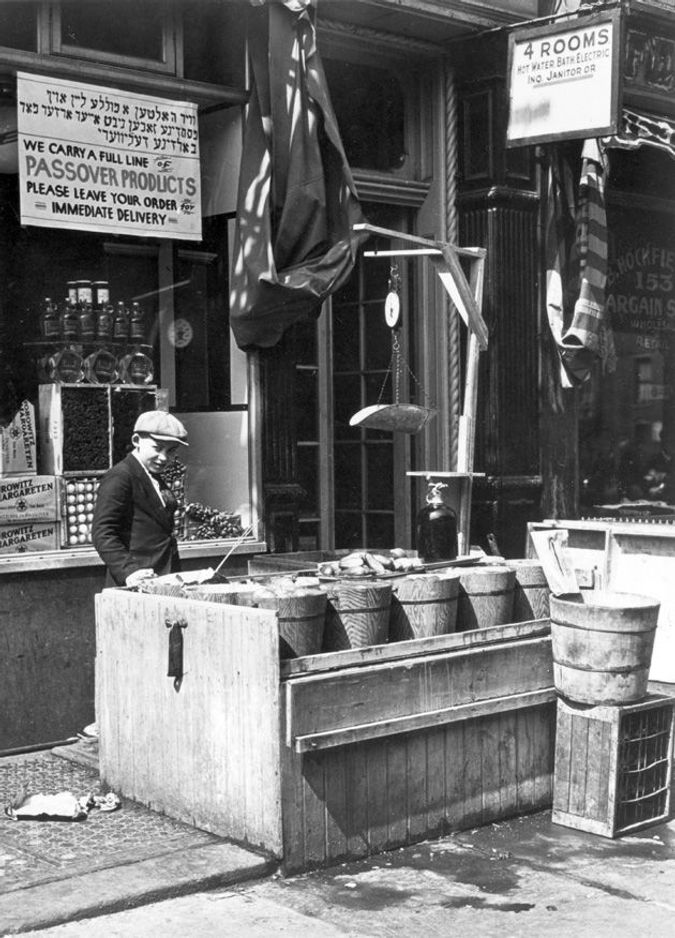 But there was a time when the pickle commanded more respect. From the late 1800s through the mid 1900s, it was a staple of Jewish (and, by extension, New York) cuisine. Peddlers sold brined cukes right from the barrel, and bowls of half and full sours got plunked onto delicatessen tables, free of charge — a modest but tasty amuse bouche. During that time, more than 100 independent pickle sellers (mostly new Jewish immigrants) jostled for real estate on streets and in storefronts on Manhattan’s cramped Lower East Side. The thriving industry, which eventually spilled northward and into other boroughs, supported cucumber wholesalers, barrel makers and spice blenders, along with the picklers themselves.

From the piquant kimchi adored by Koreans to the pickled eggs sold in pubs across Britain, nearly every culture pickles something*. *But New York’s pickles were direct descendants of those eaten in Eastern Europe, where pickling was a central part of the diet. (Imagine living through a bitter Lithuanian winter without access to fresh produce, and the pickle’s value skyrockets.) Steeped in saltwater loaded with garlic, dill and spices, these pickles served as a tart connecter between the immigrants’ new home and the land they left behind.

“If you ask people who lived [on the Lower East Side] what they remember about growing up, they talk about the scent of pickles,” said Nancy Ralph, who directs the New York Food Museum and founded the annual New York City International Pickle Day Festival. “You can smell them a mile away; nothing else can carry a memory like that.”

Today, the number of pickle shops on the Lower East Side has dwindled to two (Guss’ Pickles and The Pickle Guys), with only a handful of family-owned companies scattered around the boroughs (for example, Ba-Tampte in Brooklyn and United Pickle in the Bronx, the latter of which supplies the iconic 2nd Ave. and Carnegie delis). And although Pickle Packers International claims that Americans still consume an average of 106 pickles every year, the overall awareness and appreciation of the pickle has faded, along with deli culture itself. “Back in 2000, I was talking to a newer New Yorker about how weird it was that the old industry was gone,” Ralph said. “And she said, ‘What pickle industry?’”

Indeed, the golden age of the straight-from-the-barrel New York pickle has passed. What’s left is a handful of

national brands (Claussen, Vlasic and the like) that stand as mediocre proxies for a once-thriving food culture. Still, the love of sour, satisfying foods has not completely faded. Over the past decade, a small but dedicated crop of farmers, food artisans and brine enthusiasts has staged a quiet revolution to bring back the traditional pickle, come hell or Heinz 57.

Sandor Ellix Katz, author of the book “Wild Fermentation: The Flavor, Nutrition, and Craft of Live-Culture Foods” (Chelsea Green, 2003), is perhaps the movement’s most fervent advocate. Known among friends as Sandorkraut, Katz describes himself as a “fermentation revivalist.” He travels around the country, touting the poetry of pickles and sauerkraut, along with miso, kimchi and other foods preserved through fermentation, which produces probiotic microorganisms that nourish the body and enable digestion. Not surprisingly, Katz points to the pickles he ate as a child in New York City as his “gateway drug” to fermentation. “Those brined pickles — so different from the vinegar pickles that fill the supermarket shelves — got me hooked,” he said in an interview last year with the food blog The Jew & The Carrot.

Katz’s devotion is echoed in new small-scale companies such as MoonBrine and Real Pickles in Massachusetts, and Rick’s Picks and McClure’s Pickles in New York. The company’s efforts to recapture the magic of pickles “like Grandma used to make” are winning over customers. “I’ve had runners who buy our products for the brine,” said Stewart Golomb, owner of MoonBrine. “It makes a natural Gatorade.”

Nearby in Connecticut, the Adamah Jewish Environmental Fellowship sells lacto-fermented kosher dills, dilly beans, sauerkraut, kimchi and beets, with the motto, “Young Jewish farmers: Changing the world one pickle at a time.” The Adamah fellows began pickling in 2006 as a way to preserve that year’s bumper crop of organic cucumbers, while experimenting with new ways to raise revenue. According to Miriam Feiner, a products manager, last year’s sales generated about $12,000 in revenue.

Together, these picklers, and others like them, are restoring the pickle’s reputation as an icon all its own. So close your eyes, crunch down and swoon — these pickles are ready for their close-up.

1) Steam potatoes until tender (about 10 minutes), drain and set aside to cool.

3) Mix gently until ingredients are blended. Refrigerate and serve.

1). Make brine: Bring water to a boil in large pot over high heat. Add salt and stir until dissolved. Set aside to cool to room temperature.

2). Prepare jars: Either run through the hot cycle of the dishwasher or fill them with boiling water, and pour out.

3). Pack the jars tightly with cucumbers. While packing, distribute the garlic, pickling spices, and bay leaves equally among the jars and around the cucumbers.

4). Pour in enough brine to cover the cucumbers. Add sprigs of dill and dill seed, pushing them in wherever you can. Cover the jars loosely with their lids or with pieces of cheesecloth secured with rubber bands. Store in a cool, dark place (not the fridge).

5). After 3 days, check to see if they are ready. For really sour pickles, let them ferment for about 6 days. Once the pickles are at a stage you like, refrigerate them. They will continue to grow stronger the longer they are stored, even in the refrigerator (though at a much slower pace).

The Pickle: No Second Fiddle