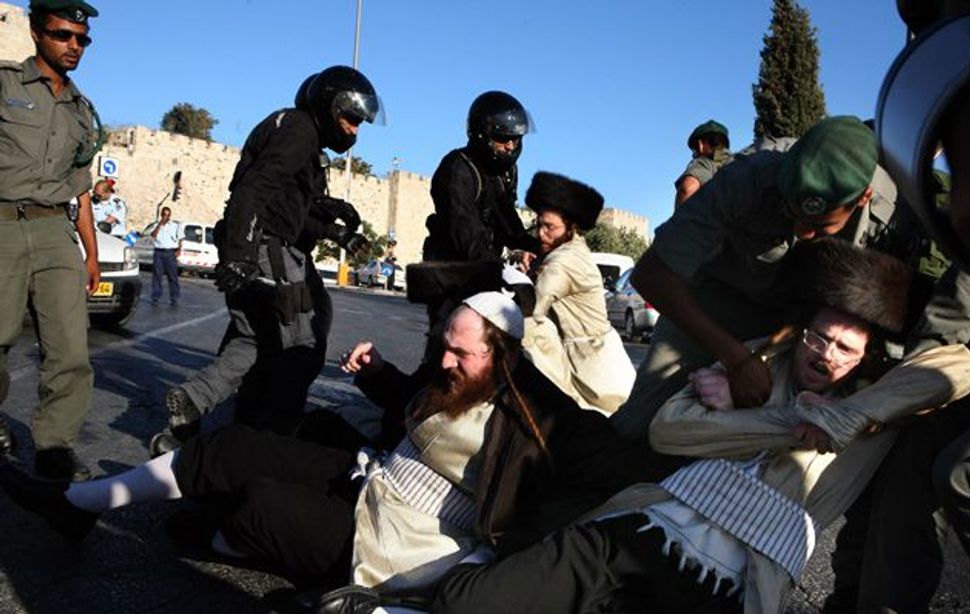 No Rest On Saturday: Ultra-Orthodox Jews clashed with police on July 11 in Jerusalem during protests over the opening of parking lots on the Sabbath. Image by Getty Images

Now a regular fixture on the front pages of Israel’s Sunday newspapers, pictures of parking protests by sometimes violent Haredim seem to chronicle a simple and familiar problem: religious-secular friction. In reality, the photos tell a different, more complicated story.

In the months of June and July, there have been mass protests, turning violent at times, against the decision of Jerusalem Mayor Nir Barkat to open parking facilities just outside the Old City on the Sabbath.

While the fury of the protesters is directed against Barkat, experts say that the roots go deeper. “The reason for the tension is not really friction between the ultra-Orthodox community and Barkat, the secular mayor,” said Hebrew University political scientist Abraham Diskin, an expert on Jerusalem politics. “The reason is internal tensions within the Haredi community.”

In early June, Barkat set out to tackle a strange situation concerning Jerusalem’s Old City, the jewel in the crown of Israel’s tourist sites. Because Sunday is part of their workweek, most Israelis make their visits Saturdays. But not only does public transport come to a standstill over the Sabbath, requiring people to drive their cars, but parking lots near the Old City also shut down to please Jerusalem’s Orthodox Jews.

“It was a pain. People parked and double-parked all over,” said Mark Feldman, CEO of Ziontours Jerusalem, a large travel agency.

On the first Saturday in June, Barkat opened a municipal parking lot in Jerusalem, known as the Safra Square lot. In an overture to the religious community, non-Jews operated the lot, and parking was free. Protests called by the Eida Haredit, the Haredi umbrella organization that represents the most hard-line elements in the community, drew around 5,000 people and sometimes degenerated into violence. Representatives for the Eida Haredit were unavailable for comment.

Then Barkat’s office said it was trying to find a way of providing parking without arousing the ire of Haredim, and kept the lot closed on the following two Saturdays. “This was not a capitulation to violence,” Barkat said when announcing the closure.

At the end of June, Barkat announced a new plan: Instead of opening the Safra Square lot, he would open almost 1,000 parking spots at the privately owned Carta lot just outside the Old City.

Barkat hoped this solution would end tensions with Haredim. But it did not.

The opposition from the members of the municipal council who are Haredi and represent just under a third of the mayor’s coalition was subdued, mainly limited to letters to and meetings with Barkat. The only exception was Shas member Shmuel Yitzhaki, who resigned. Most Haredi council members are political pragmatists who did not want to take up the issue at all, and who called for parking to be halted only after the Eida Haredit forced the issue.

But the Eida Haredit called for demonstrations on the streets of Jerusalem for June 27, which was the first Saturday that the Carta lot opened, and on the two Saturdays thereafter.

Police estimated attendance at about 5,000 each week, and there was some stone throwing at police, passing motorists and counter-demonstrators.

On July 11, a few dozen Haredim reached the parking lot and tried to block traffic by sitting in the street. They were dragged away by police. One protester, who lay down underneath a bus, was arrested.

There have been 77 arrests in Sabbath protests since the beginning of June. Five police officers were injured.

Despite the continued protests, Barkat considers the issue closed. “The mayor found a real solution to a real problem and has now returned to tackling the economy and education,” his spokesman, Stephan Miller, told the Forward.

But experts believe that the conflict will continue. “It’s a question about who runs the city — it’s a power struggle in the city,” said Noam Shoval, a geographer at the Hebrew University.

Some see it more as a power struggle for dominance in the Haredi community.

Despite attracting large numbers at protests, the Eida Haredit does not represent the mainstream of the Haredi community. It managed to get people outside of its rank and file to attend demonstrations, after garnering lukewarm support by mainstream Haredi rabbis and leaders. “They were backed into a corner by the Eida Haredit,” said Diskin, who elaborated that once the issue had been forced onto the agenda, mainstream figures such as Yosef Shalom Elyashiv and Ovadia Yosef, the respective leading rabbis of the Ashkenazic and Sephardic Haredi sectors, as well as Haredi politicians, had to voice some support to save face.

And while these mainstream figures are careful not to go on record undermining the fight against Sabbath parking, people close to them are open about the fact that the Eida Haredit is out on a limb. “No Haredi will condone the opening of a municipal parking lot, and they do see municipal involvement [in parking] as another level of breaking of Shabbat in Jerusalem,” Jonathan Rosenblum, who heads the Haredi advocacy organization Jewish Media Resources, told the Forward. “But many of us realize that protests will not stop the breaking of Shabbat in this way, and may have the opposite effect.”

He said that much of the attendance from outside the Eida Haredit hardcore is accounted for by yeshiva students who go where the action is.

Bar-Ilan University geography professor Yosef Shilhav, an expert on power dynamics in the community, said that the Eida Haredit is keen to boost its own standing among Haredim while denigrating that of other, more moderate Haredi groups.

The clashes over parking in Jerusalem, Shilhav said, give the Eida Haredit a chance to present itself as the face of Haredi activism and to embarrass the more moderate Haredi groups who remain in Barkat’s coalition.

In Diskin’s formulation, “It’s the Eida Haredit vs. Porush, not the Eida Haredit against the municipality.” He was referring to Meir Porush, the Haredi candidate who stood against Barkat in the mayoral election, whose faction, United Torah Judaism, now sits in his coalition.

The clashes are also thought to bring an added financial advantage to the Eida Haredit. “They need this for raising money from abroad. As long as they are in conflict, they are going to their communities in the United States, and people will be more generous,” Shilhav said.