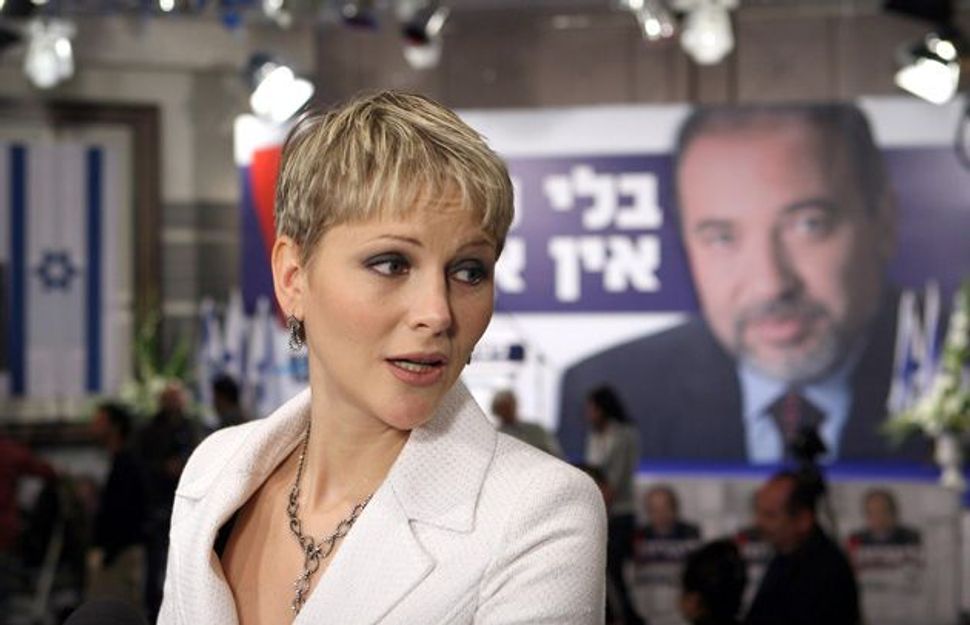 “Another soldier,” Anastasia Michaeli Samuelson said, patting her belly proudly when asked the sex of her soon-to-be-born eighth child.

Michaeli, a glamorous 34-year-old Knesset member from Avigdor Lieberman’s Yisrael Beiteinu party, is not being flippant. Nor is she daunted by the domestic burdens her concept of feminine patriotism implies. “God gave women powers,” she told the Forward. “My home runs like a well-oiled machine. My children are taught the meaning of responsibility.”

A Russian-born convert to Judaism, former beauty queen and celebrated TV personality, Michaeli is, in many ways, the perfect bright and sunny face for Lieberman’s highly controversial political party, one often accused of advancing a racist agenda. Michaeli, a kind of younger Sigourney Weaver look-alike, adamantly rejects the charge. “I am not a racist,” she insisted.

Michaeli comes from the Sarah Palin school of conservatism, wherein motherhood and a conservative political ideology line up in perfect symmetry. Empowered right-wing women, according to this outlook, have lots of babies, look great, hold down super-busy government posts while claiming to get little help from nannies, insist they are not feminists and (in Israel) know the power of the womb (as do the Palestinians with whom they see themselves in competition).

As if to buttress her claim to super womanhood, a framed cover of the January issue of La’Isha, a popular Israeli women’s magazine looks down from a wall above her swivel chair and desk in her cramped Knesset office, showing her cheerful, impeccably dressed brood, with Michaeli, svelte and radiant, beaming in front of them.

The pixie-haired blonde immigrated to Israel from St. Petersburg in 1997 and converted to Judaism in 2000. She wed her husband, Yossi Samuelson, a Latvian-born Israeli Jew 10 years her senior, twice: once in a Russian civil ceremony after the birth of their first child, when Samuelson was employed in Moscow by Tadiran, an Israeli electrical supplier, and a second time after her conversion, when she and Samuelson already had three children and were living in Israel.

Influenced by her Soviet upbringing with its emphasis on “patriotism” and “loyalty,” and its view of Judaism as a nationality, Michaeli doesn’t distinguish between being a good Jew and an Israeli patriot. “Judaism is at the basis of why we have this country to begin with. It’s not just a religion,” she said.

Despite being a politician, Michaeli is super-careful when expressing her political views. She tries to stick to her stated political passion: legislation to help working mothers. But as holder of the ninth slot on Yisrael Beiteinu’s slate, she cannot ignore the party’s controversial platform — in particular, its proposed mandatory loyalty oath to the Jewish state, to be taken by all citizens. Lieberman, Michaeli’s party boss and Israel’s current foreign minister, also said he wanted to ban Arab parties whose leaders opposed the Gaza offensive.

Lieberman has made it clear that, as he conceived his loyalty oath proposal, any Israeli who refused to take it would lose citizenship, voting rights and the right to hold elective office. But the legislation he ultimately submitted to the Knesset — which failed to pass it — would have imposed the oath only on immigrants seeking citizenship.

Michaeli smoothes out concerns about the oath, saying her party is still working on legislation to convert the campaign slogan to a bill.

“Lots of countries demand some degree of patriotism as a condition for citizenship,” she said. “In the United States, flags are present in schools and classrooms, and people who want citizenship must have some command of basic English, minimal knowledge of American history and recite the Pledge of Allegiance.”

Even in the former Soviet Union, Michaeli recalls, she had to wear a pin etched with a tiny face of Lenin. “We can’t grant citizenship and pay National Insurance Institute benefits [akin to American Social Security] to people who educate their children to kill us,” she argued.

Michaeli insists that she is not singling out any one group. “You want to be part of this country, demonstrate your loyalty. That’s the message,” she said.

Michaeli attempts to tread carefully in this area. In 2007, while serving as a panelist on the committee to select Israel’s representative to the Eurovision Song Contest, she was quoted by the news Web site Ynet as referring in seemingly negative racial terms to contestant Liel Kolet, a Jewish pop singer then contending for a Eurovision spot. Israel, Michaeli said, according to Ynet, shouldn’t be represented by a singer who “looks Arab.”

“We should select people who can represent us on more than the artistic level…. We should also consider how they would represent the country,” Ynet quoted her as saying. “I am looking at this competition from a Zionist point of view.”

Today, Michaeli denies having made the remarks about Kolet and says Ynet took her comments out of context. Shelli Gil, a Ynet senior producer, defended the story, based in part on a phone interview Ynet conducted with Michaeli after her alleged Eurovision remarks, as accurate and in context. Ynet “stands behind every word that we printed” in the article, Gil said.

“That remark killed me,” Michaeli said. “I lost two years of my life because of it.”

Michaeli gives lip service to her party’s proposal for civil unions in Israel, where currently marriage is legally controlled by the state-funded rabbinate and the recognized religious heads of the country’s Muslim, Christian and Druze minorities. This leaves thousands of secular Russian immigrants unable to marry because their status as Jews under traditional religious criteria is questionable.

Despite this, Michaeli has clearly developed a soft spot for her adopted religion’s rituals, people and institutions — though the strictly Orthodox rabbinate would look askance at the snug black stretch suit, plunging white-shirted neckline and black suede boots with fringes she is wearing the day she is interviewed. She has a kosher home, she says, is careful not to mix meat and milk, and has enrolled her brood in state religious schools. Her office, she says, is seeking funding for the yeshiva of a rabbi in her hometown of Rishon Letzion.

Michaeli does lament having had to regularly drive on the Sabbath to visit her husband’s now deceased father when he was ill. It is an infraction that could prompt the state rabbinate to revoke the conversion it granted her. Today’s rabbinate insists that converts remain religiously observant. She wistfully expresses the hope that someday she can be *frum. *“I would love that,” she said.

Michaeli’s conversion appears to have been smoother than most, even though it took three-and-a-half years. Some 300,000 immigrants from the former Soviet Union are not considered to be Jews under Halacha, or traditional Jewish religious law. And few are willing to consider conversion, because of the demands of the Orthodox lifestyle. “The religion is not always perfect,” she said apologetically.

Some say that Michaeli, like her fellow Yisrael Beiteinu ex-model-now-member of the Knesset, Orli Levy, has been selected just to deflect attention from Lieberman’s legal troubles, not to mention his more controversial views. But Michaeli insists she is not mere window dressing. In any event, the ex-Miss St. Petersburg doesn’t quite understand why Jews should fight one another when there is a much bigger, more obvious lion at the gate. “If Israeli-Jewish women had more babies, we wouldn’t have a demographic problem here,” she said, patting her belly.