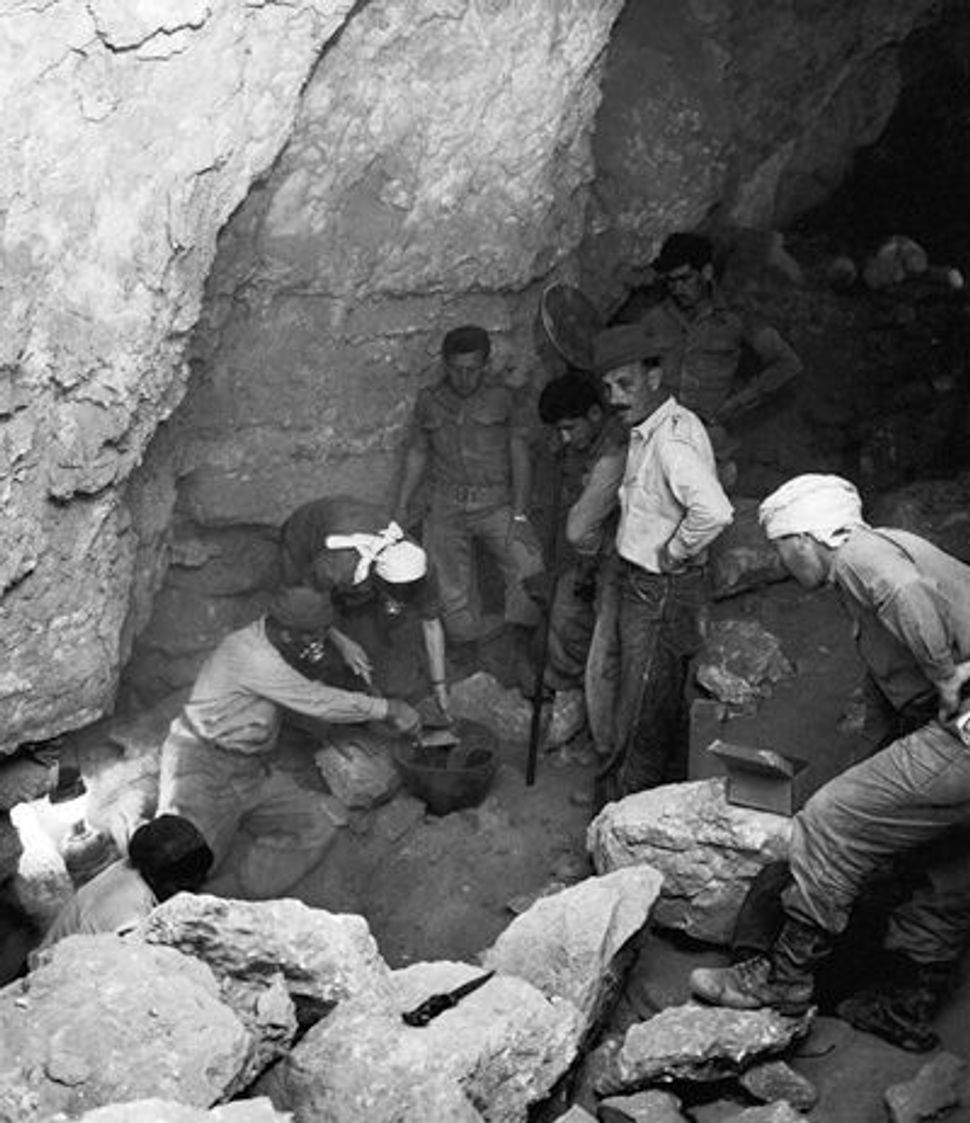 Scroll Down: Israeli archaeologist Yigael Yadin at the Dead Sea excavation site in Wadi Qumran, circa 1953. Image by Getty Images

Contested Homes: From the dusty caves of Qumran to the gleam-ing pyramids of Toronto, the Dead Sea Scrolls find their resting place in question.

Crowds at the Royal Ontario Museum’s heavily hyped Dead Sea Scrolls exhibition — Dead Sea Scrolls: Words That Changed the World, which runs until January 3, 2010 — have far exceeded the museum’s own expectations. In the show’s first nine days, more than 18,000 people flocked to the museum’s spectacular new Daniel Libeskind-designed Michael Lee-Chin Crystal pavilion — about 52% above the exhibitors’ own projections.

But hosannas for the showing, featuring four scroll fragments on loan from the Israel Antiquities Authority and displayed in public for the first time, have not been universal. Last April, the Palestinian Authority appealed to Canada’s prime minister, Stephen Harper, to cancel the show, citing international conventions that make it illegal for a government agency to take archaeological artifacts from a territory that its country occupies. 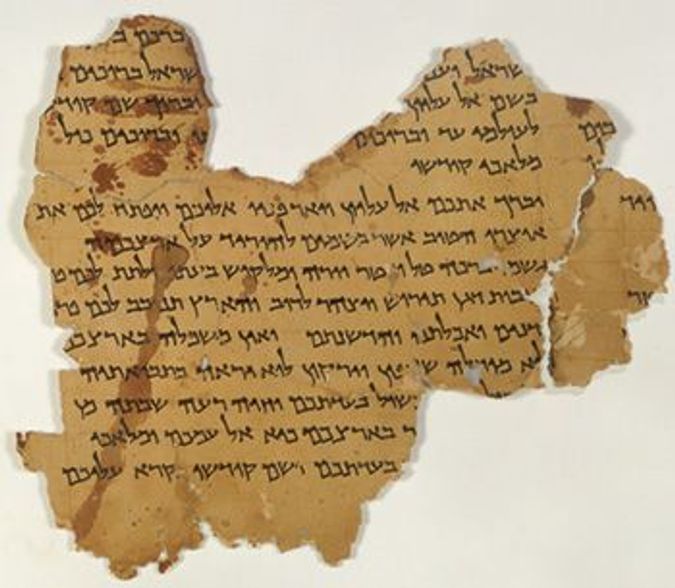 The P.A. and Muslim activists claimed that the scrolls were “stolen” from Palestinian territory and illegally obtained when Israel annexed East Jerusalem — where the scrolls were stored — in 1967. “The exhibition would entail exhibiting or displaying artifacts removed from the Palestinian territories” by Israel, wrote Hamdan Taha, head of the archaeological department in the Palestinian Ministry of Tourism & Antiquities, in a widely publicized letter, calling the show a violation of international law.

Echoing those sentiments on the day of the press preview, Canadian Arab Federation executive director Mohamed Boudjenane called the scrolls “stolen property… seized from an occupied territory,” and repeated the call to close the show on a national newscast.

Their appeal obviously didn’t stop the exhibit. “Any claim that the Palestinian Authority might present to the Dead Sea Scrolls would face significant legal obstacles, particularly at this time,” said Patty Gerstenblith, president of the Virginia-based Lawyers’ Committee for Cultural Heritage Preservation and director of the Center for Art, Museum, and Cultural Heritage Law Program of Chicago’s DePaul University. “The Palestinian Authority’s lack of status as a recognized state would undermine any potential claim based on national ownership or rights to cultural property under international legal instruments.”

Regardless, the activists’ complaints set off a media firestorm in Canada and the blogosphere. And they made ROM personnel work diligently to avoid any hint of controversy at a June press conference, at which Ontario Premier Dalton McGuinty cut a ceremonial red ribbon.

“I can’t answer that question,” said Mark Engstrom, the museum’s vice president of collections and research, when pressed for details on the Palestinian complaints. “The museum’s not the right forum for a political debate,” opined Julian Siggers, vice president of programs at the ROM. “I’m an ancient historian. I can tell you about the past,” said Risa Levitt Kohn, the noted San Diego State University professor who guest-curated the show. “I’m an archaeologist. All we do is cultural activities,” said Hava Katz, the IAA curator of the exhibit.

A less modulated voice came from the margins of the exhibit — literally. Polish-born, New York-based artist Joshua Neustein was invited to create an installation to complement the scrolls in a gallery two levels up from the main exhibit. The result, Margins, embeds one of Neustein’s signature chandeliers in a gallery wall, accompanied by transparent sheets bearing typography and texts. “I wanted to take the scrolls away from archaeologists and make it part of a philosophical discussion,” he said.

Neustein continued: “I don’t know what the Palestinians really want. Where are the scrolls supposed to go? To a political organization? Do they want them not to be shown? They’re political activists, and they look for causes that will gather together a group of people around a slogan. They don’t know what they want.” Antiquities, Neustein said, “are being contested all over the world. The Greeks want the Elgin marbles back. We’ll end up in the Western Hemisphere with just tepees.” 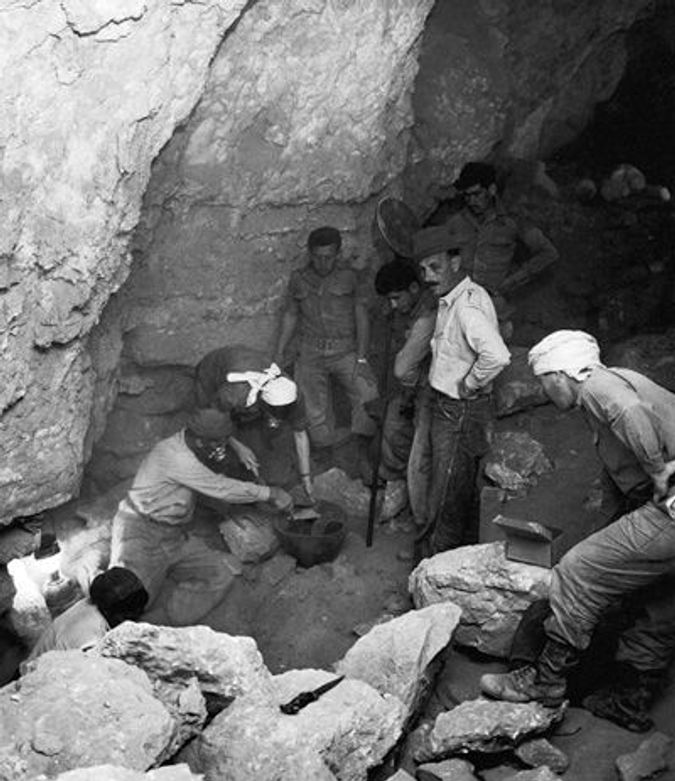 Scroll Down: Israeli archaeologist Yigael Yadin at the Dead Sea excavation site in Wadi Qumran, circa 1953. Image by Getty Images

In fact, “the last thing the Palestinian Authority would say is that people shouldn’t see them,” said Thomas Woodley, the Montreal-based president of Canadians for Justice and Peace in the Middle East, which has been active in the protests. “But there are principles that need to be respected. UNESCO conventions and protocols are clear that it’s illegal for a country to take artifacts of a territory it is occupying. ”

The scrolls “are a treasure for all humanity. But we would like to see the Palestinians returned as caretakers, and we would like there to be a balanced narrative. The ROM is presenting the scrolls entirely from the Israeli perspective. There’s no discussion about what happened between their discovery and their exhibition today.”

Why protest now? “Your guess is as good as mine,” Woodley said. “It should have happened a long time ago. Maybe people are just realizing some of the implications. The rightful caretakers of these scrolls would be the Palestinian Authority.”

Gerstenblith also couldn’t speculate on the timing, “unless maybe they have been influenced by the large number of restitutions in the past two to three years from American and other institutions to Italy.”

Though the objections didn’t accomplish their stated goal, an undercurrent of conflict now colors the exhibit and its media coverage. The dustup, however, might have helped the museum; the ROM has been “thrilled with the response” since the show opened on June 27, according to spokeswoman Marilynne Friedman. And, political disputes aside, the ROM is winning accolades for a state-of-the-art presentation of the ancient texts.

The ROM also can claim a number of firsts — no small feat, considering how many times the scrolls have been exhibited since their accidental discovery by Bedouin goat-herder Muhammed edh-Dhib in 1947. It’s the first major museum exhibit to broaden focus from the Qumran caves where the scrolls were found to the wider ancient world that produced them, from Jerusalem to the Second Temple to the key Galilee town of Sephorris. It’s the first time the four previously unseen scroll fragments are being displayed in public, made possible because of the ROM’s long relationship with the IAA.

Words that Changed the World is the first blockbuster show in the ROM’s new wing and — this being multicultural Toronto — it’s probably the first scrolls display co-chaired by a “community advisory panel” comprising a Christian, a Muslim and a Jew, with massive outreach to clergy, community leaders, cultural influencers and educators.

“The ROM did a brilliant job, and I don’t use that word lightly. The exhibit provides a lovely formulation that allows us to see the scrolls in an ancient context. It transforms the way in which the scrolls have been received,” said Hindy Najman, director of the Centre for Jewish Studies at the University of Toronto and a consultant on the show. “It’s an historic moment for Canada.”

Michael Kaminer is a frequent Forward contributor whose writing has appeared in The Washington Post and The New York Times.