Jewish Leaders Give Obama No Push-Back on Settlement Freeze 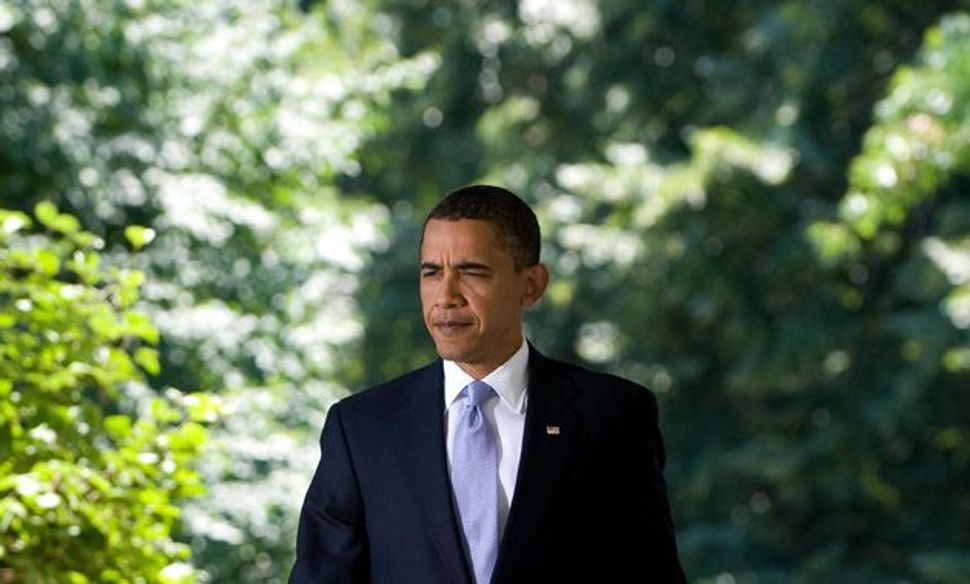 Show of Support: President Obama met with Jewish leaders at the White House on July 13. Image by GETTY IMAGES

Forty-five minutes at the White House was all it took to crystallize the new paradigm defining the relations among the Obama administration, the Jewish community and Israel.

As Jewish leaders left their July 13 meeting with President Obama — “glowing,” according to one of the participants — it became clear that despite some misgivings regarding the tone Obama has used toward Israel, the bulk of the organized Jewish community is in full support of his peace efforts, including his demand for a complete freeze of Jewish settlements on the Israeli-occupied West Bank.

Furthermore, the meeting yielded a broad understanding that the administration’s decision to take its dispute with Israel to the public sphere will not be challenged by American Jews.

“I believe the president got the impression that there is broad support within the community for his policies, and some differences on the tactical level,” said Rabbi Steven Wernick, executive vice president of the United Synagogue of Conservative Judaism, after the meeting.

The meeting took place as Obama’s special Middle East envoy, former senator George Mitchell, continues talks with Israel on a possible compromise deal on the settlement-freeze issue. In negotiations with Mitchell, Israel has made the case for “normal life” (a term that Israeli leader Benjamin Netanyahu now uses in place of the previously used phrase “natural growth”) within the settlement blocs and argued against making concessions on the settlement issue without receiving anything in return from the Palestinians and the Arab states.

Yet this view seems to have no traction among Jewish supporters of Israel in the United States. Rabbi Eric Yoffie, president of the Union for Reform Judaism, said in the meeting with Obama that expanding settlements was not in the interest of Israel, of the United States or of the American Jewish community. “Nobody in the room questioned it,” Yoffie said of the response of the other 15 Jewish leaders in attendance. “Not one person in the room said to the president, ‘You’re wrong on that.’”

It is worth noting, however, that explicitly pro-settlement groups were not invited to the meeting.

Senior Israeli officials have argued in recent weeks that Obama’s administration has made a triple mistake in taking Israel to task on the settlement issue. In their view, Obama believed, wrongly, that Netanyahu’s government would crumble under pressure; that Arab states would offer partial normalization in return for the settlement freeze, and that the Jewish community would not fight the administration on this issue. While many Israelis believe that all these assumptions fell flat, it is clear from the meeting and from statements by Jewish leaders that the community is still strongly on Obama’s side in the settlement dispute.

“There’s a message here for Israel,” said Jeremy Ben-Ami, executive director of the dovish group J Street and one of the White House meeting participants. “The message is that there is no court of appeals, that the American Jewish community and the president share the same interest.”

In a conference call held a day before the meeting with the president, Jewish representatives tried to formulate a unified message to present to Obama. In this conversation, too, none of the participants raised any objection to the call for a settlement freeze per se. Abraham Foxman, national director of the Anti-Defamation League, took issue with the tone used by the Obama administration when dealing with Israel. And the next day, he raised his concerns with the president.

“I said it was the tone and the lack of intimacy with Israel,” Foxman said after the meeting. “The result is that people see Israel as the obstacle to peace. This is a very strong perception.”

According to those present, Obama was forthcoming in responding to the argument that he is perceived as applying uneven pressure to Israel. He said he was, in fact, pressuring both the Palestinians and the Arab states, and criticized Arab leaders for not showing more courage. The president put the blame on the media for reporting more about the dispute with Israel (which he referred to as an “inter-family difference”), and promised, according to participants, to fix that impression.

But Obama did not back off on the issue of publicly disagreeing with Israel. His response to Malcolm Hoenlein, executive vice chairman of the Conference of Presidents of Major American Jewish Organizations, was firm. To Hoenlein’s suggestions that Israel would be more likely to make concessions if it felt “there is no daylight” between Jerusalem and Washington, Obama made clear that he did not believe in hiding differences of opinion. He cited the past eight years of the Bush administration as evidence that no public differences does not necessarily lead to progress.

Keeping disputes with Washington private has been a key goal of Israel and its American supporters throughout the years. The underlying assumption was that public disagreements would only embolden Israeli resistance to policy changes. Steve Rosen, director of the Middle East Forum’s Washington Project and a former longtime pro-Israel lobbyist, said that experts who are now key Obama advisers, including Dennis Ross, shared this view. “Now they’ve bought into the approach that a public dispute with Israel is beneficial in proving America is not Israel’s lawyer,” he said.

In the White House meeting, Obama’s statement that he would not avoid public disagreements with Israel went unchallenged. But later, several participants expressed their concern.

In an email, Stephen Savitsky, president of the Union of Orthodox Jewish Congregations of America, wrote, “While allies may, of course, disagree on specifics, there ought not be significant ‘daylight’ between the United States and Israel that would give the nations’ mutual enemies comfort and encouragement.” Foxman added that he was concerned that “a relationship of intimacy is being destroyed. And for what?”

Rosen, who is now observing Jewish organizational life from the outside, argued that the Jewish leaders’ muted response to Obama on this issue stems from fear. “No one wants to be on the wrong side of the White House,” he said. “Groups that come and express themselves sharply against Israel are welcome, but those who don’t will not be welcomed next time.”

But reluctance to criticize the president could also be attributed to other factors, including the broad support for Obama among the Jewish community’s rank and file, and the president’s personal charm, which seemed to have worked wonders on participants. “It was extraordinary,” Wernick said. Ira Forman, CEO of the National Jewish Democratic Council, called Obama “masterful,” and Marla Gilson, Washington representative of Hadassah, said she felt “very much at ease” with the president.

But Obama’s charm has not been enough to win over the Israeli public, which is highly critical of the American president. A recent poll found that only 6% of Israeli Jews view Obama as pro-Israel.

“There is a need to talk not only to the Arab street, but to the Israeli street, as well,” said Lee Rosenberg, the next president of the American Israel Public Affairs Committee and a close friend of Obama, in the meeting. Debra DeLee, president and CEO of Americans for Peace Now, called on the president to speak directly to the people of Israel and to possibly make a visit to the Holy Land.

Obama did not respond directly to the call, but sources in touch with the administration said that the issue of a possible visit or address to the Israeli people is being considered by White House aides.

Jewish Leaders Give Obama No Push-Back on Settlement Freeze